...On the Feast of Stephen

I haven't quite gone through Christmas pictures yet, but I have already gone through Boxing Day photos (at least some of them and I'm planning on taking more, so perhaps I'm not as on top of things as I think I am today). We took the kids up to Salt Lake today to see a mall display (more on that later) and while we were up there we decided we'd better drop by to visit Grandpa Frank.

We tried calling before we dropped by but he didn't answer the phone, so we just sort of showed up unannounced. He graciously invited us inside and took the kids over to his Christmas train. He said he hasn't set up a tree since Grandma Sharon passed away. She was always the one to decorate the tree; he always set up his Christmas train around it. So now there's only the train, but at least it's something special and festive.

The kids were mesmerized, of course. 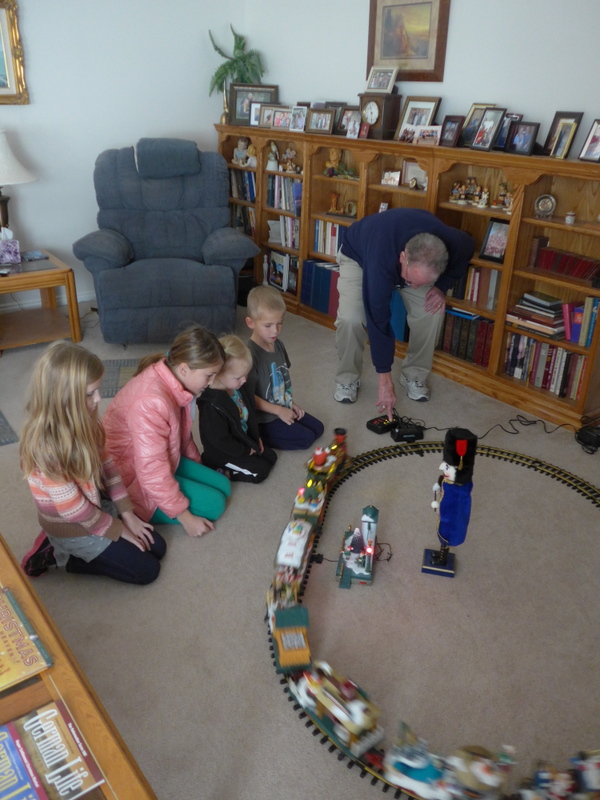 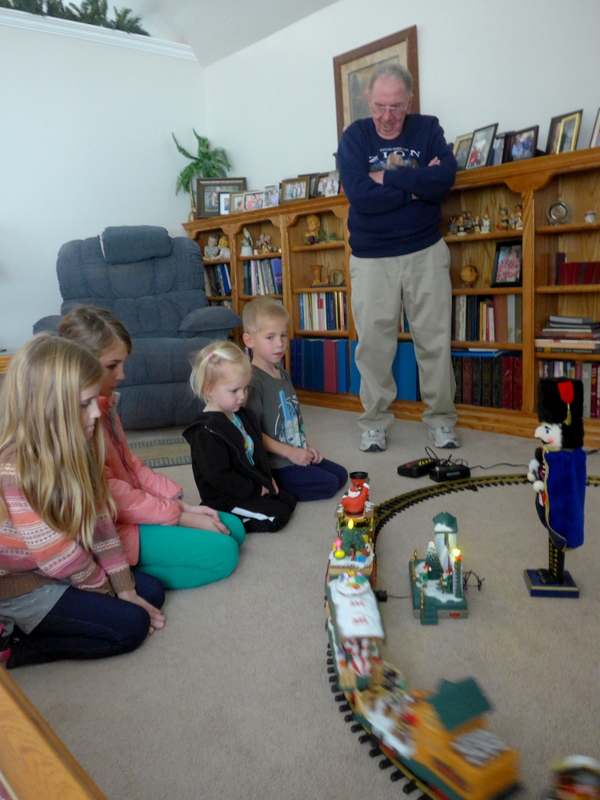 Grandpa let the kids push as many different yellow buttons as they wanted. Each one makes a train sound (a whistle blast, for example) or makes Santa say something (like, "Ho! Ho! Ho!" or "All aboard!"). Benjamin and Zoë loved that! The kids watched the train go around and around while Andrew and I visited with Grandpa. 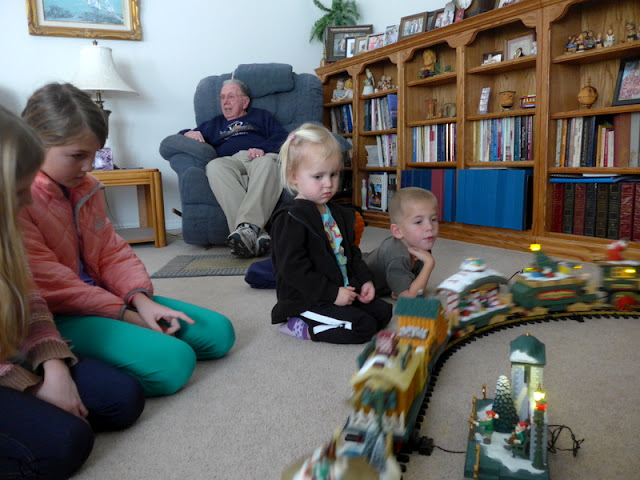 When they tired of the train, Grandpa Frank showed us his model airplanes, which he now keeps in the guest bedrooms (right on the beds; he joked that he couldn't do that when Sharon was alive) and then he showed off his new toy helicopter for the kids (right in the living room, another thing "we couldn't do it Sharon were around). 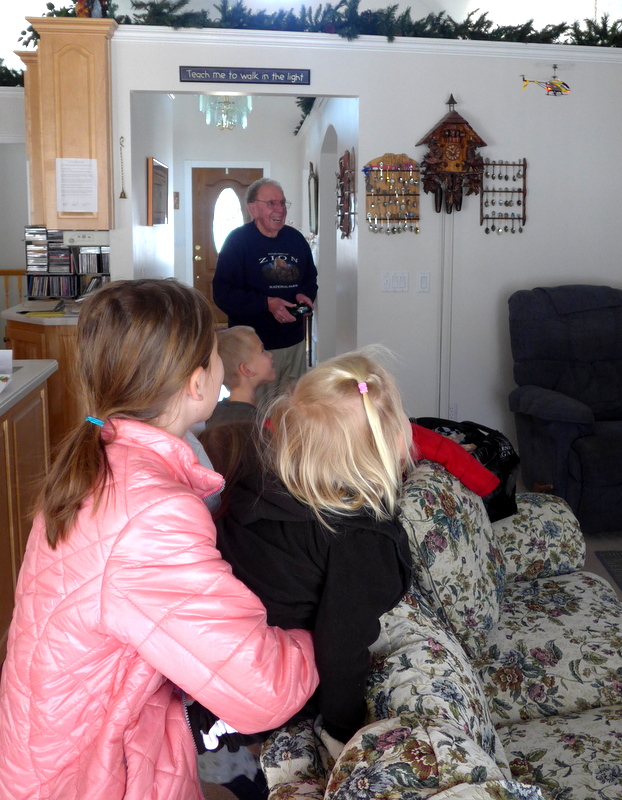 His model trains and planes and things certainly keep him active and bring him a lot of joy, but I have a hunch he misses Grandma Sharon a lot. 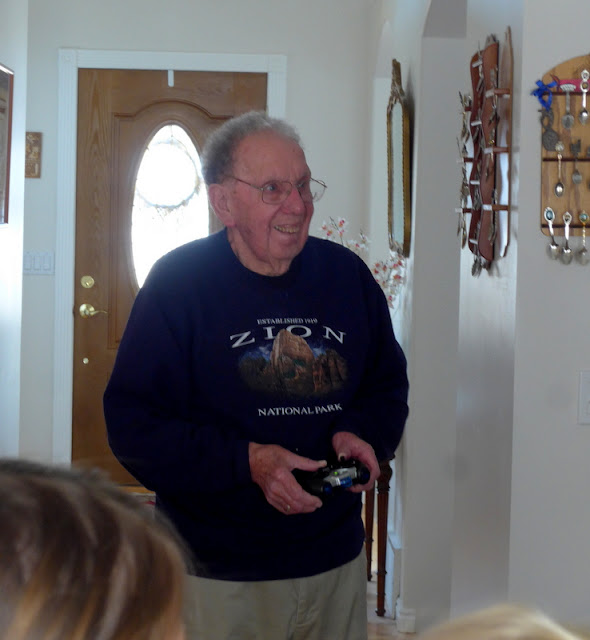 Rachel and Miriam played a few piano pieces for him. They were a little apprehensive because they didn't have music with them and they haven't played much on a real piano (we have a keyboard) and they weren't planning on playing...but they both did great!

(I only laugh when I say, "I'm teaching them," because my piano skills are, uh, limited (compared to, say, Andrew's) so I think it's funny that I'm the one teaching them piano).

And here's Miriam playing Once There Was a Snowman:

And here's everyone with Grandpa Frank: 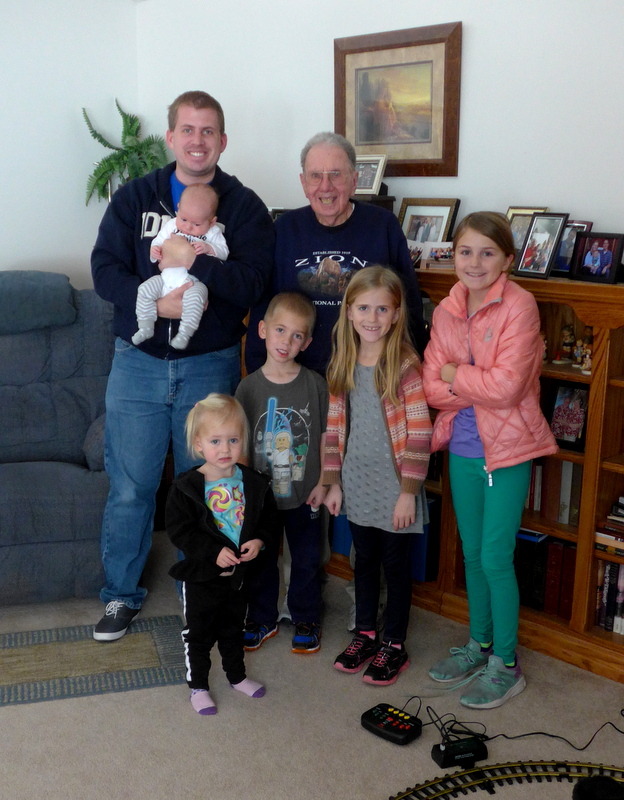 I'm so glad he was home so that we could stop by!

(Completely unrelated, but my mom pointed out today that Boxing Day and St. Stephen's Day are one and the same and the song Good King Wenceslas is about Boxing Day. And somehow I'd never put two and two together, but there you go).
Posted by Nancy at 5:20 PM