This has been sitting as a draft forever

Like, I think some of the pictures are from November even. So I'm just going to throw them up there, I guess, because I never did start writing any commentary about them...

They're mostly just pictures of how much craziness goes on with three little ones at home. More, I suppose, of how much Benjamin and Zoë love to love on Alexander.

Poor little guy. This was one of my favourite outfits for Benjamin, but I don't think Alexander liked wearing it all that much... 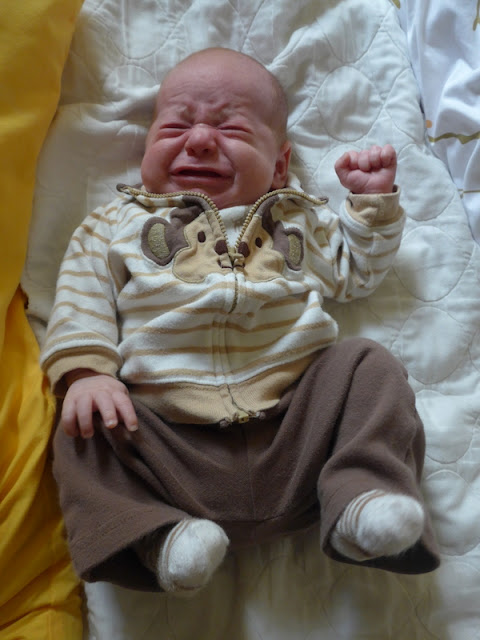 I never really intended to have three children at home with me all day, and I guess technically Benjamin is not with me for a whole 2.5 hours a day (if we lived elsewhere he'd likely be in full-day kindergarten). Having three kids home is...taxing...but manageable.... 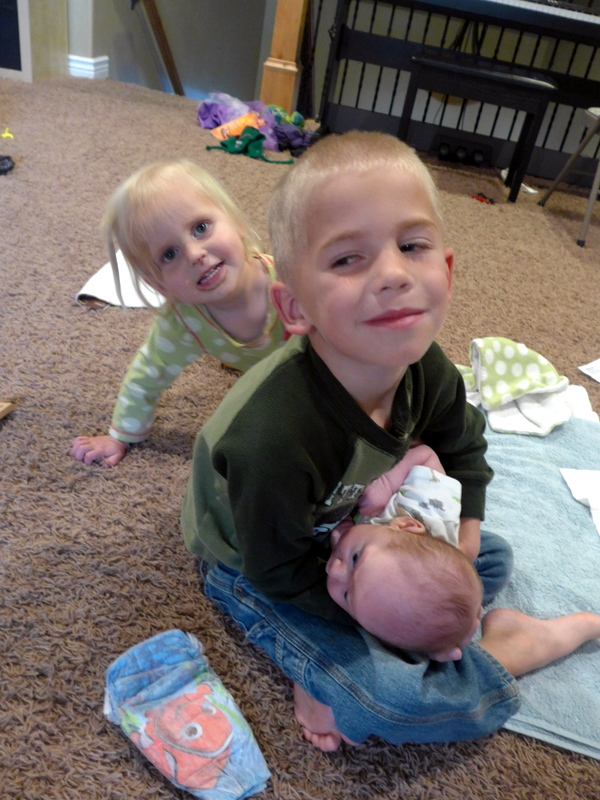 ...even if I feel like the baby is in peril every minute of every day. 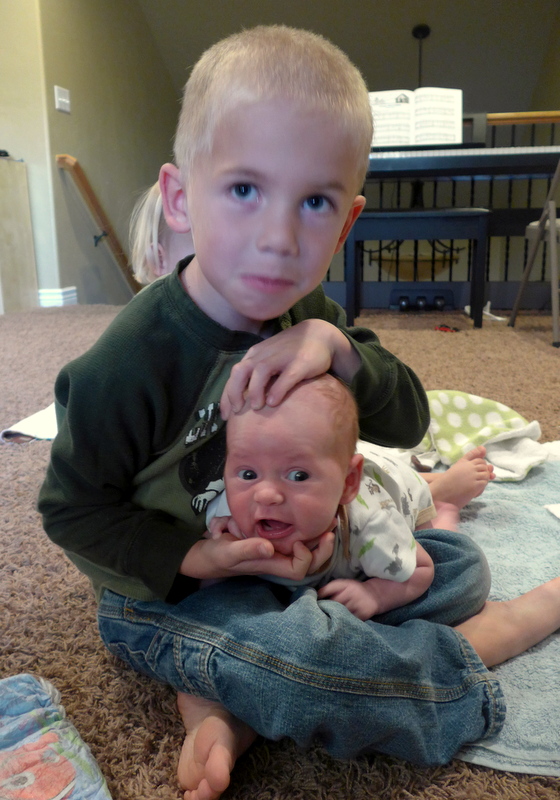 Here's Zoë throwing a bit of a fit because she wanted a turn holding the baby but Benjamin was in the middle of his turn: 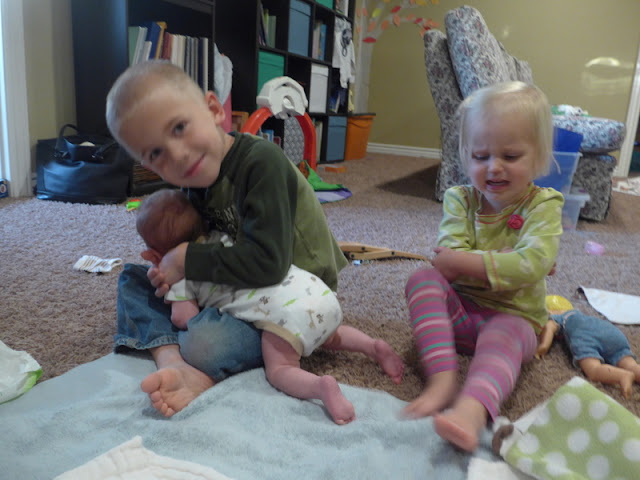 This is probably the most uncomfortable tummy time ever (but Zoë seems to have calmed down): 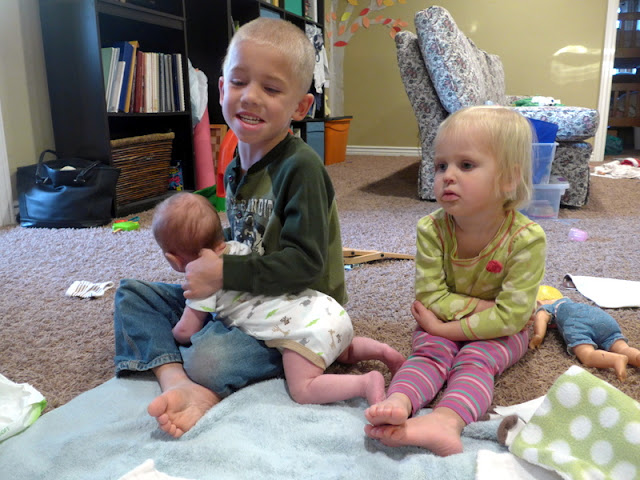 Benjamin's turn was over when Alexander spit up on him. Here he is reaching for the burp cloth I'm handing to him: 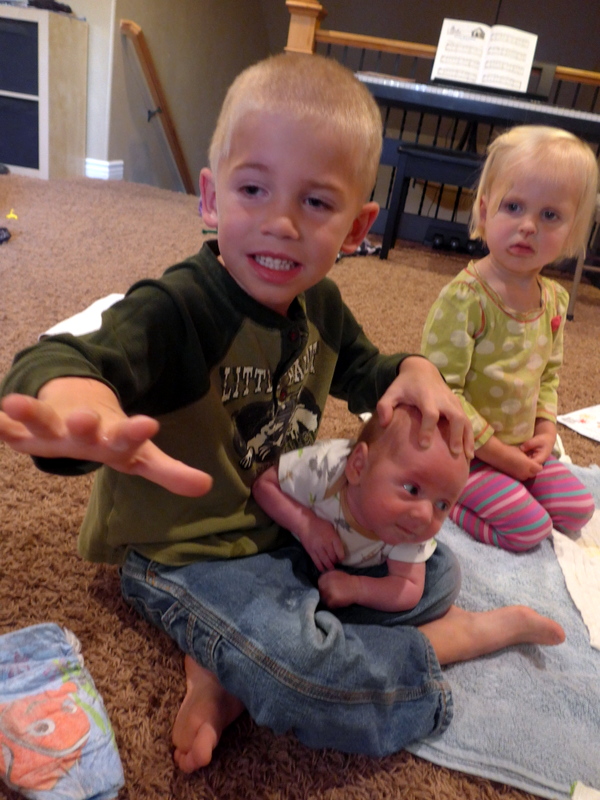 The kids treat spit up like poison. Tears have been spilt over getting a little spat up on.

One morning I turned on some Christmas music while I was putting away laundry and Zoë and Alexander relaxed on the bed together. 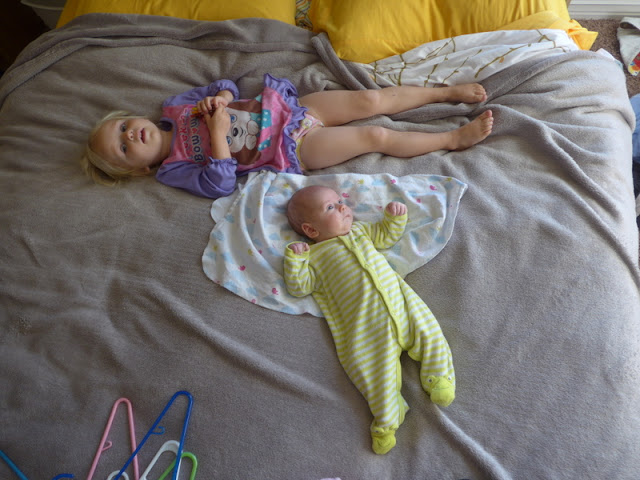 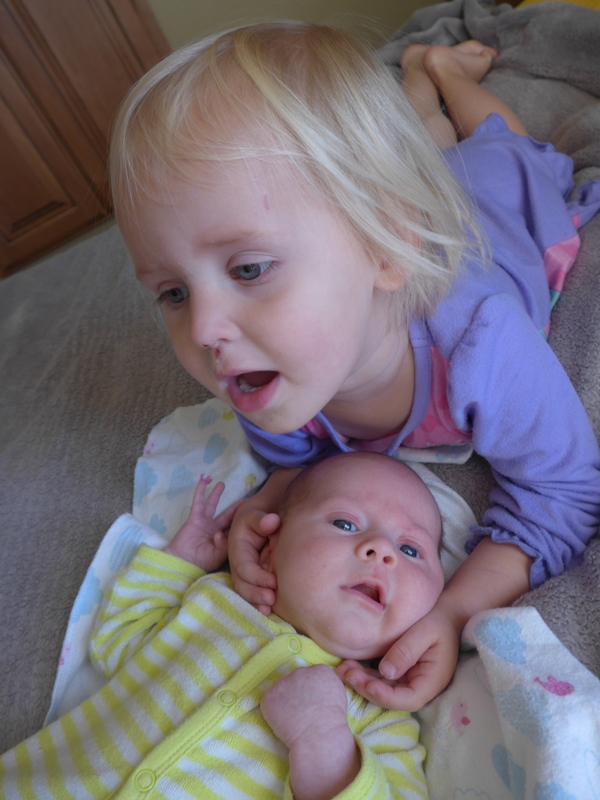 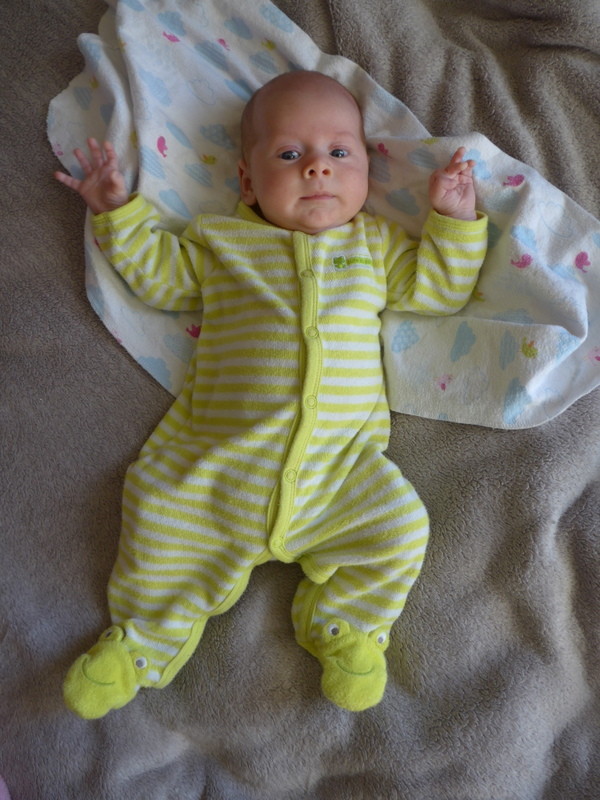 One morning a couple of weeks ago, Benjamin didn't have school but the girls still did. Andrew had taken the kids to Into the Woods at BYU the night before, so it was a bit of a late night for them. I let Benjamin sleep in and when he woke up he crawled into bed to snuggle with Alexander (who, yes, usually ends up in our bed). Alexander made the funniest face when he noticed Benjamin beside him: 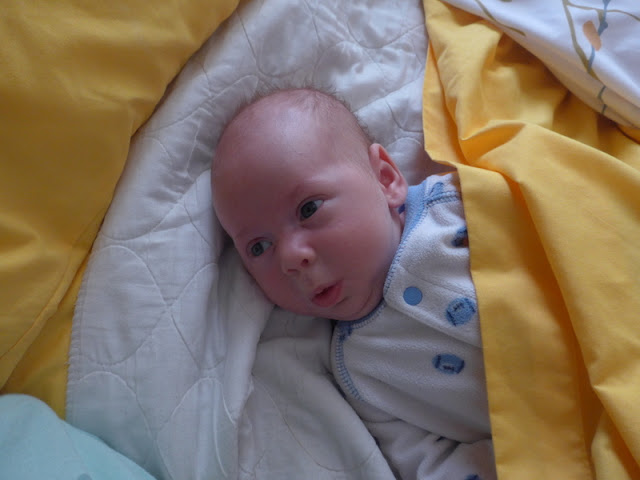 But then he decided he didn't care and went back to sleep: 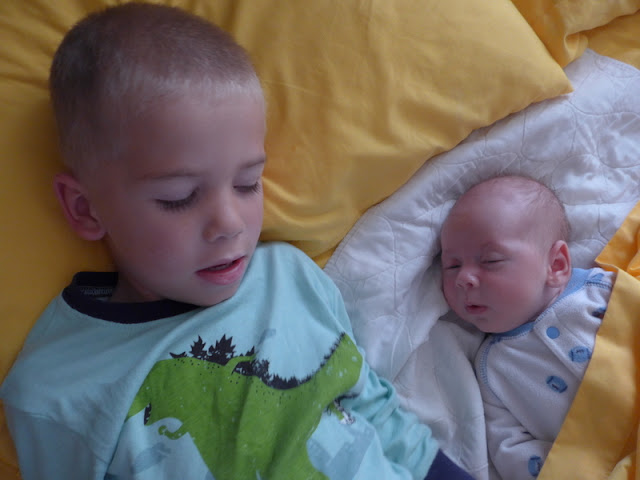 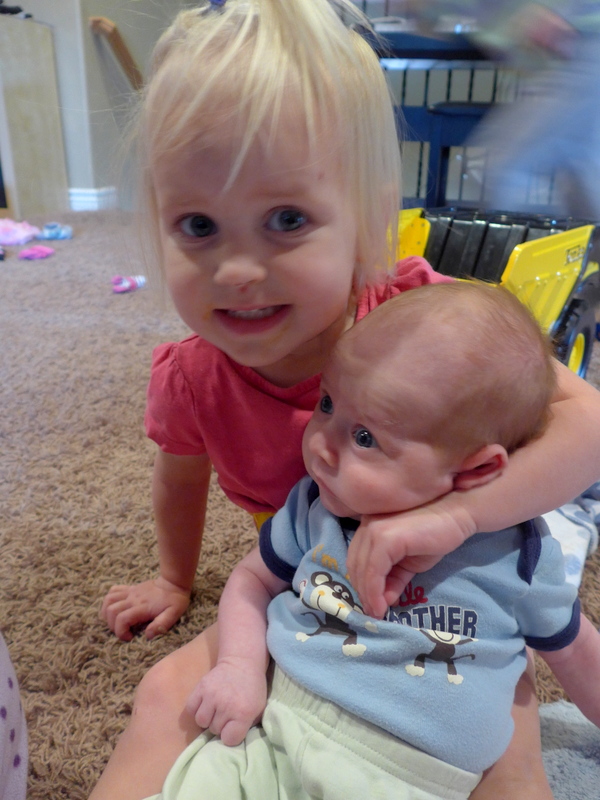 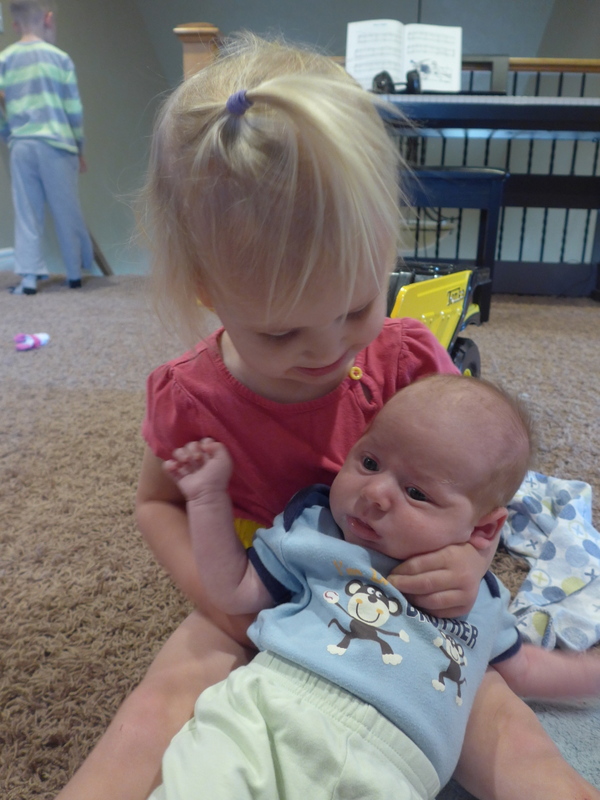 Here's Benjamin taking a turn (and Alexander is still terrified): 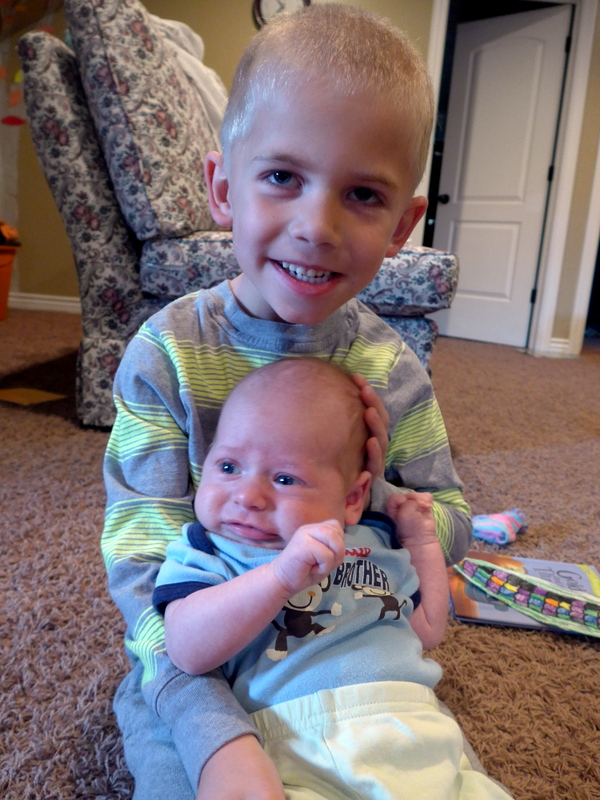 Benjamin and Zoë both like to "fall over" while they're holding him. He's perfectly safe the whole time but he hates it. So I hate it, too—just look at that quivering lip! 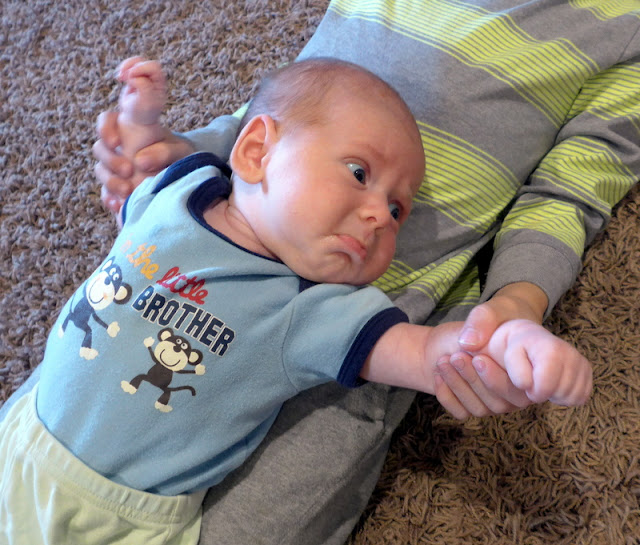 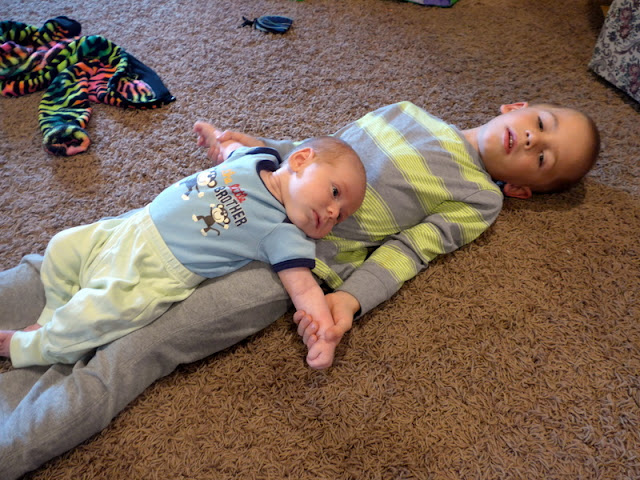 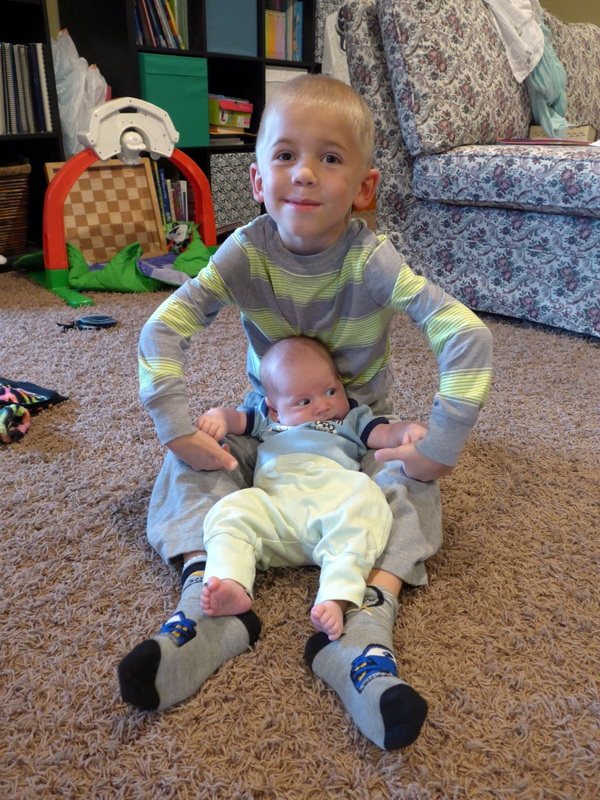 This has nothing to do with Benjamin or Zoë, but Alexander wore the little Peruvian hat Uncle Jacob brought back from his mission and he was cute, so I took a couple of pictures: 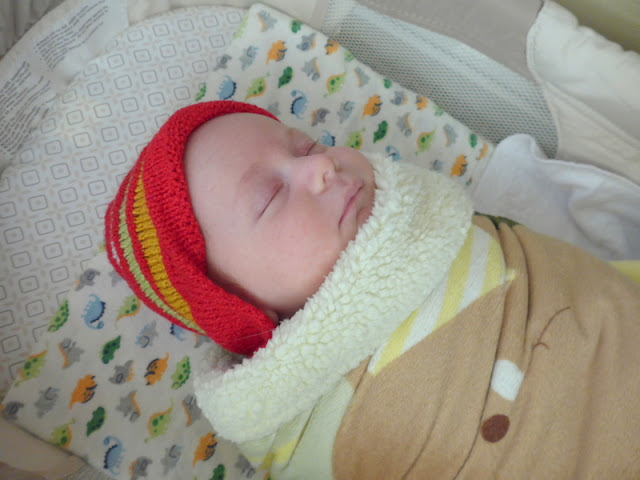 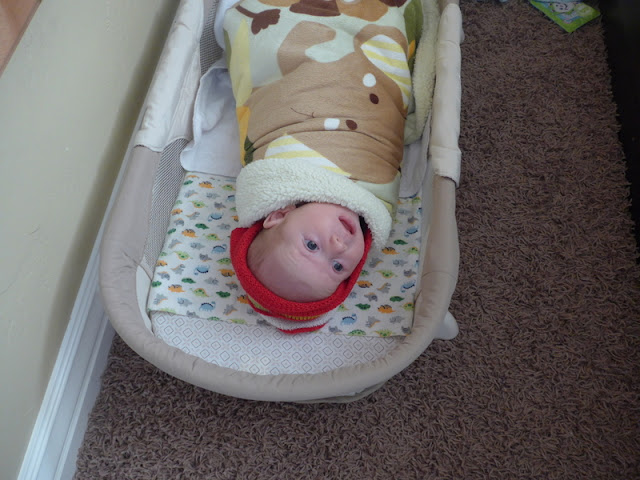 Here's another one of Benjamin holding Alexander (he's such a proud big brother): 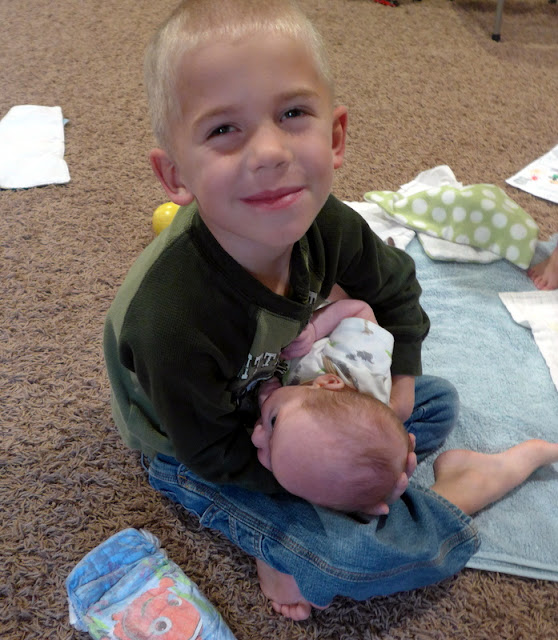 And here's a more recent one (from December 14): 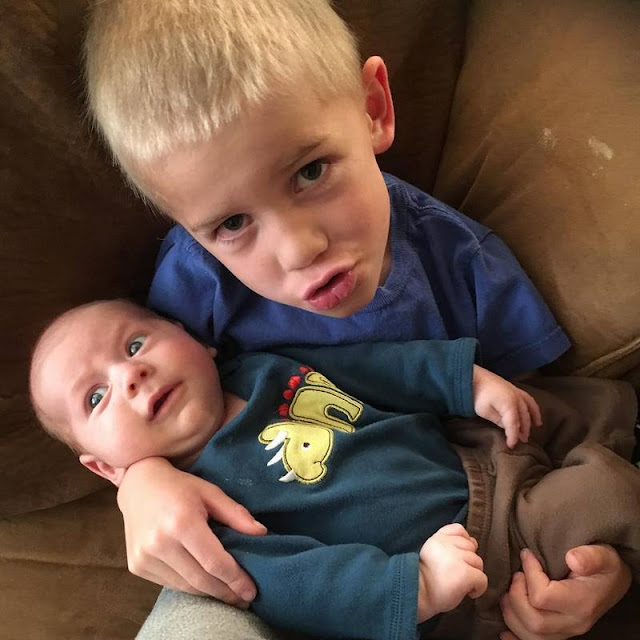 Benjamin said, "Oh, Alex, Alex, Alex! I just want to superglue him to my arms!"

But then Alexander pooped and poop is treated very similar to spit up in this house, so Benjamin just about pushed him off of his lap.
Posted by Nancy at 2:28 AM