On Christmas Day in the Morning

Andrew's family always set up a sheet to hide Christmas morning from prying eyes, so we've done that as well. The girls were all up before us in the morning, just sitting in the dark in the living room (I don't know why they didn't just turn on a light). Eventually Alexander woke me up and while I was nursing him I heard Zoë yelling about something, so I poked Andrew awake and had him check on her.

Then woke up Benjamin and made the kids clean up a bit before we let them go downstairs. We did a big Christmas train around the living room and then let Zoë lead the way to the Christmas tree. 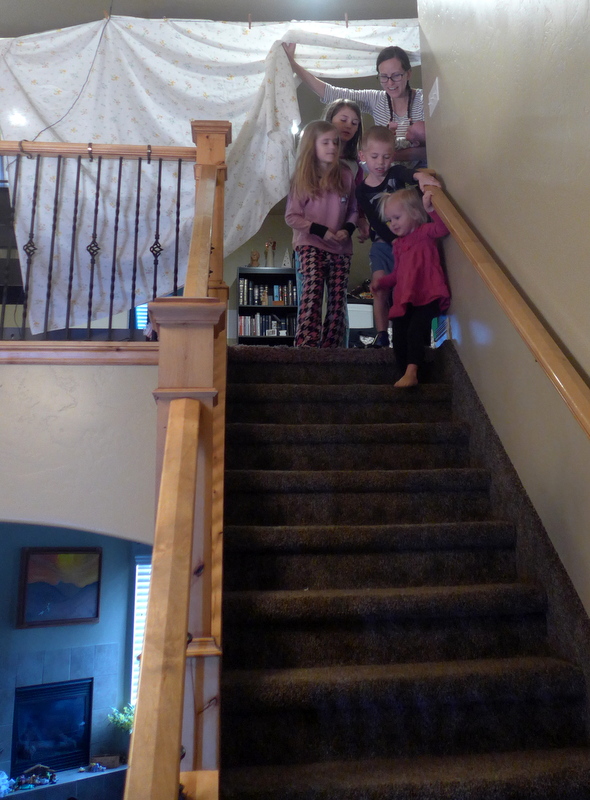 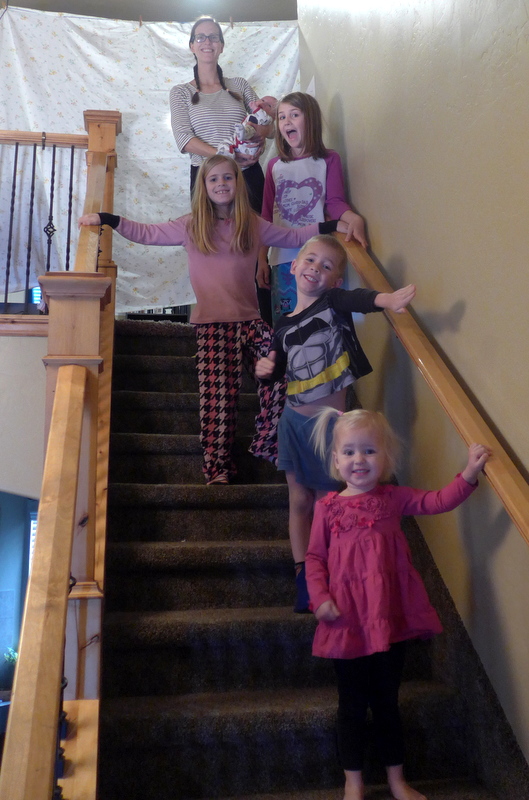 The kids were excited to open their stockings. I don't think I was quite a sweet when I was a child as my children are now. Or maybe it's because I truly believed in Santa and they...don't. Whatever the case, my children's letters to Santa are always very sweet and simple. I remember going through flyers and circling everything that I wanted. Santa never managed to get everything on my list and rarely managed to get anything (and I don't blame him one bit).

This year the three oldest kids wrote letters to Santa.


Dear Santa,
Hi, thanks for the presents you gave me last year! Here are some things that I would like this year. Could you please get some of them? Thanks!
Love, Rachel Heiss

Dear Santa,
I'm wondering if you can give [inserted: SOME] me these things on my list:
Thanks!
Love Miriam

Benjamins letter was the best. He started with his list:
And then he wrote:

Dear Santa
I lov you. Hou er the rader goieng?


The translation of Benjamin's letter is:

Dear Santa,
I love you. How are the reindeer going?

So, basically, Benjamin wants...Christmas...for Christmas, and the girls were sure to specify that they were totally cool with only getting some items on their list. And their lists are never crazy.

Like, a box of crayons I can totally make happen.

I guess we've never really pressed our kids to sit around and think about everything that they want, so they didn't know that was a thing until they started going to school really. In Rachel's first letter to Santa she asked for a candy cane—and that was it! I think that's a good way to go through life, really—having super low expectations and being thrilled with whatever you happen to get.

Benjamin didn't get much of what was on his list with his stocking. We mostly filled their stockings with new socks (how meta of us) since they've all been complaining about holey and missing socks and added some Mr. Potato Head parts we snagged from Facebook marketplace. We threw in some pencils and a notepad for each child, a chocolate orange, some M&Ms...toothbrushes. What else?

Rachel got her green water bottle (we saw a set of three on sale at Costco so she totally knew about them) and we put an emoji UNO game in Miriam's stocking (as a joke because she "hates" emojis).

Here's Alexander with his first stocking: 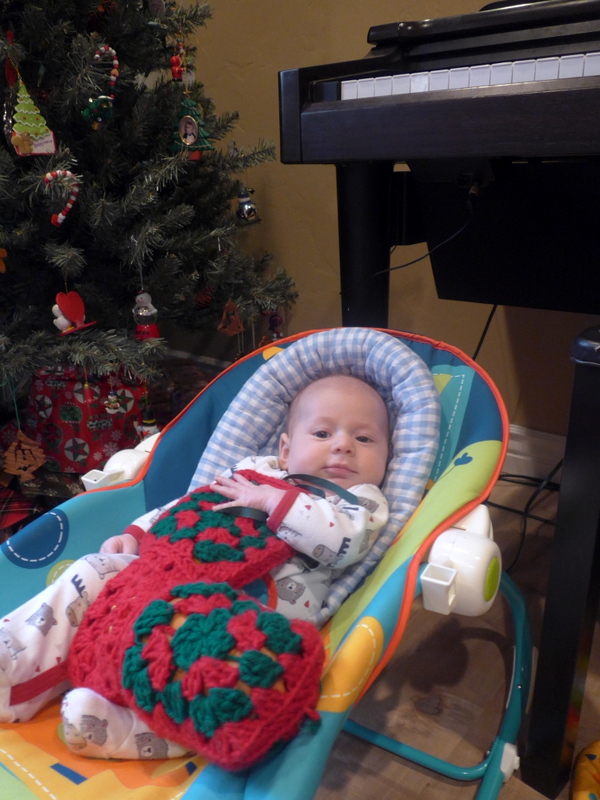 My sister Kelli gave me the strangest look when I told her we gave him Mr. Potato Head parts in his stocking. But what else were we supposed to put in there?!

He's perfectly happy living his life of luxury hand-me-downs at this point.I know he's not going to play with Mr. Potato Head for quite some time but eventually he will be joining in on the fun. We couldn't think of anything to give him.

He only had one present wrapped under the tree, too, but I don't think he felt left out or uncared for one little bit. He was actually quite content all morning. 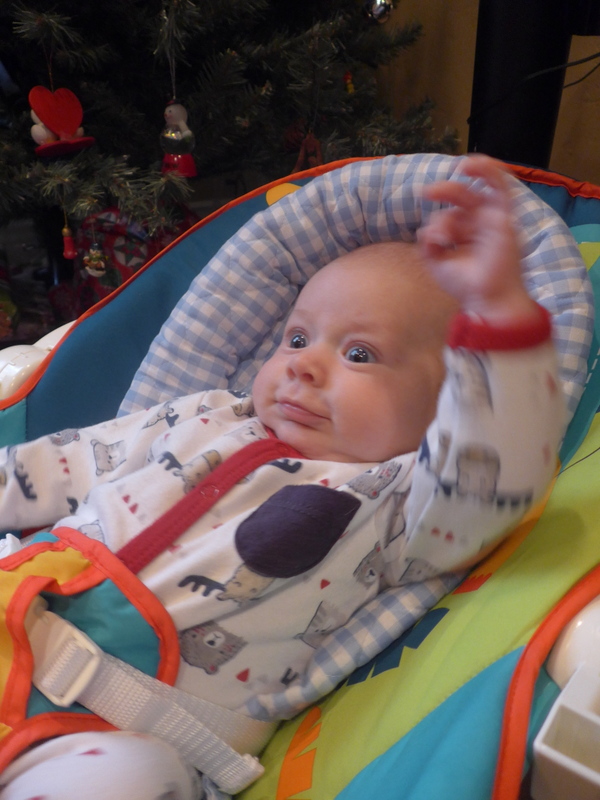 Andrew's family divvied up all the presents at once and then watched each person in turn open their entire cache.

We've done a mixture of the two practices, depending on children's ability to sit and watch vs. super intense desire to open one of their presents right now.

This is the first year that Andrew's family's system has worked for our family. I don't even know how Benjamin survived it...but he did.

We were excited for Zoë to open the llama we got for her. Auntie Josie wanted to get her a present and was texting me while she was out shopping. "Maybe I'll get her a llama stuffy," Josie said.

"We already got her a stuffed llama," I texted back. "Not a llama llama llama. Just a llama."

I started laughing when I saw what I had texted because that was a whole lot of llama!

Anyway, we thought Zoë would be so happy that she'd do her little happy cackle and we planned on filming her so we could catch her reaction. So, we got all ready to film her and she opened it...and was basically emotionless.

"A horse!" the kids guessed.

"Oh," she shrugged, putting it down and picking up the next present in her pile. She ripped open the package and revealed... "PANTS!" she squealed with delight. "MY NEW PANTS! YAY! NEW PANTS!!"

So that was a bit of a downer for us. But I guess she was excited about the pants, so...win?

And here she is cooing about, "Mine new brush!" 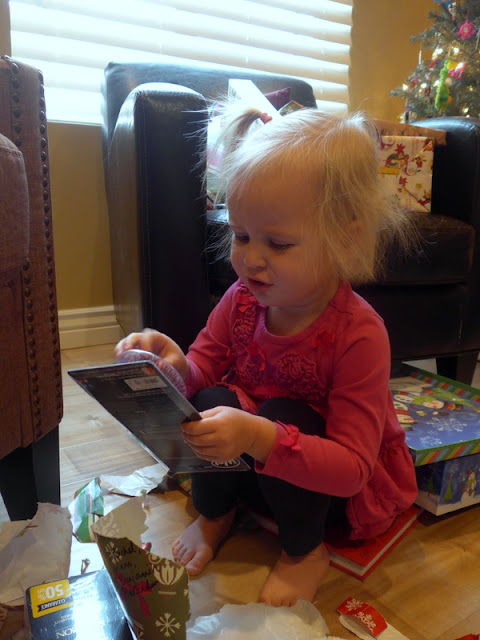 Benjamin was excited about everything he opened. We got him a spyglass (his favourite gift, he told us at dinner today): 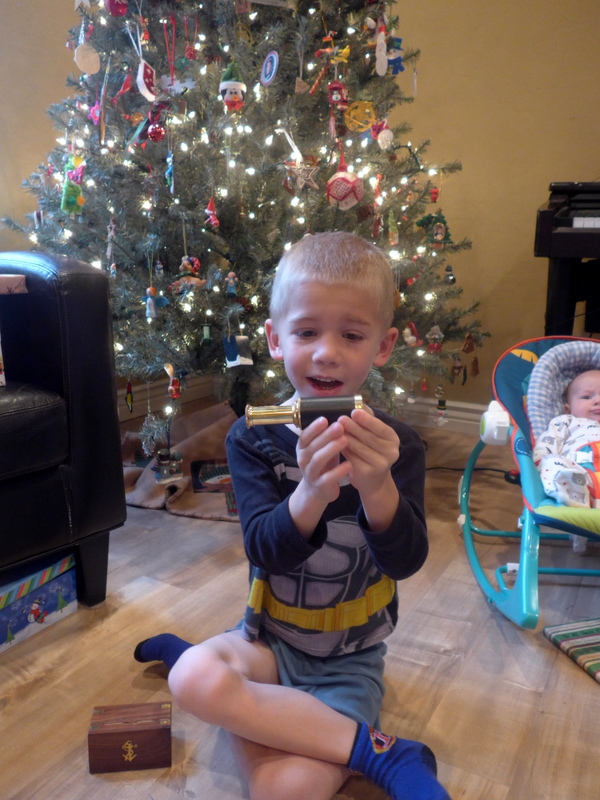 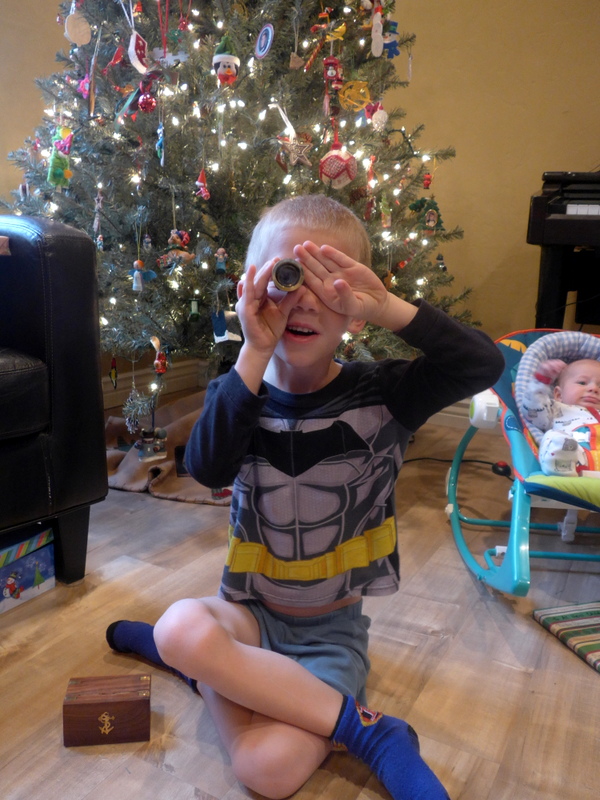 Oh, look, Zoë finally realized that it's a llama. 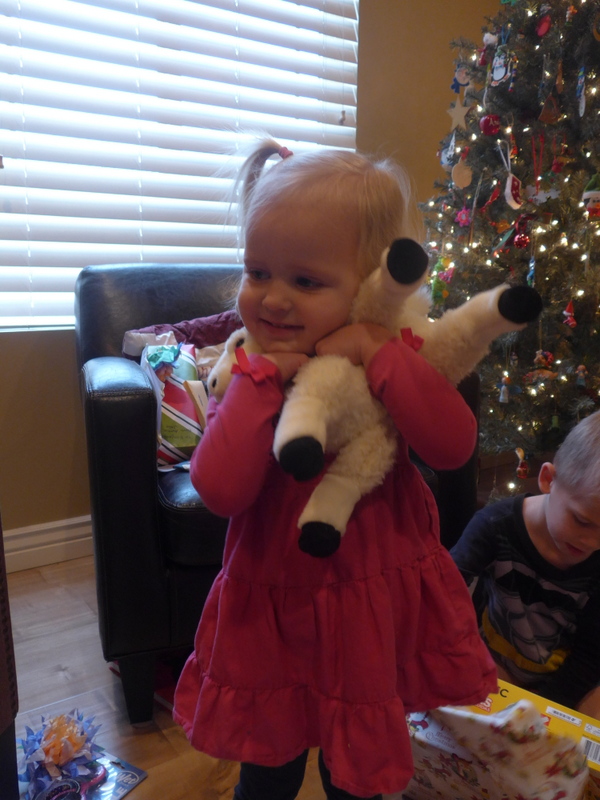 He also got some new LEGO. I realize we have a bucketload of LEGO already, but new LEGO is always exciting. He was rather excited about the pattern booklet inside and sequestered himself in the basement for hours (alone at times (I know, unbelievable right?)) piecing things together. So I may or may not have ordered him a whole book of patterns later that day (yes, on Christmas) with the hope that he will spend even more hours sequestered in the basement. 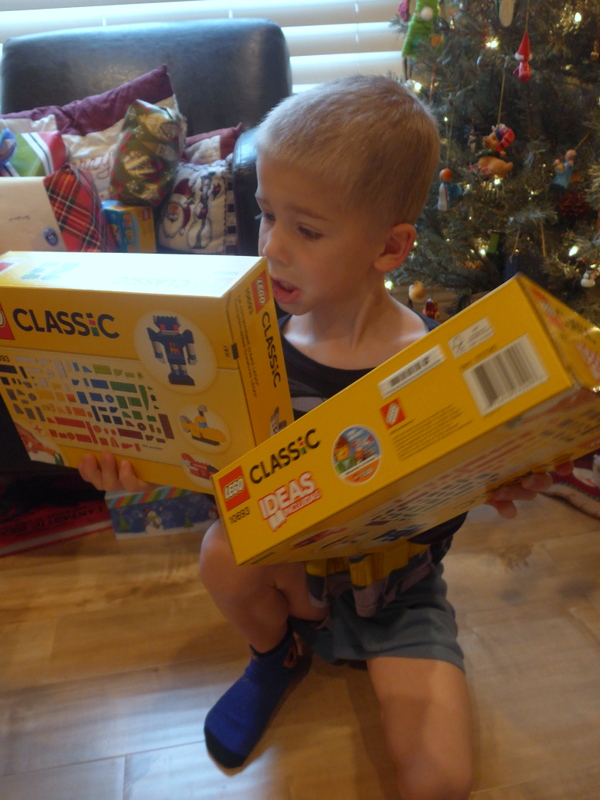 When he opened his footie jammies, he jumped up, ran over to me, and threw his arms around my neck. He was beyond excited. He's been asking for footie jammies for months. 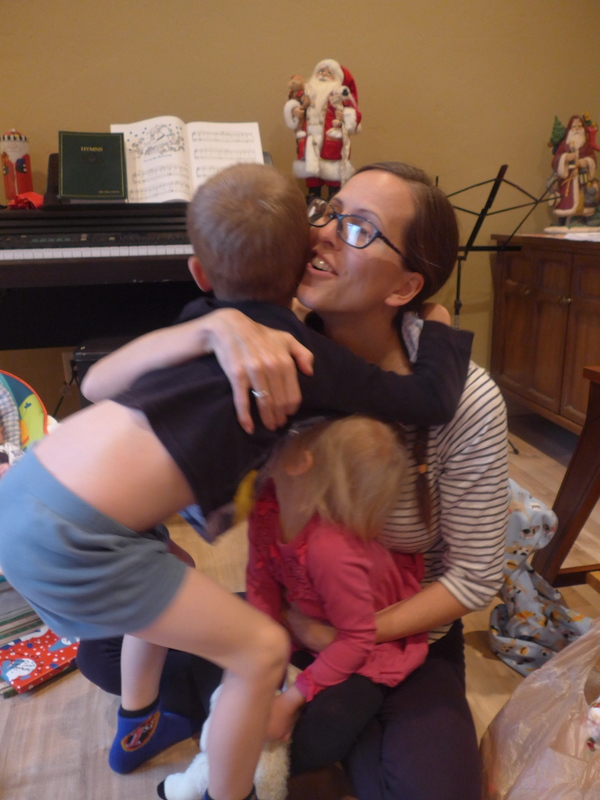 This picture is out of place here, but here are the three littles with their footie jammies on before bed on Christmas night: 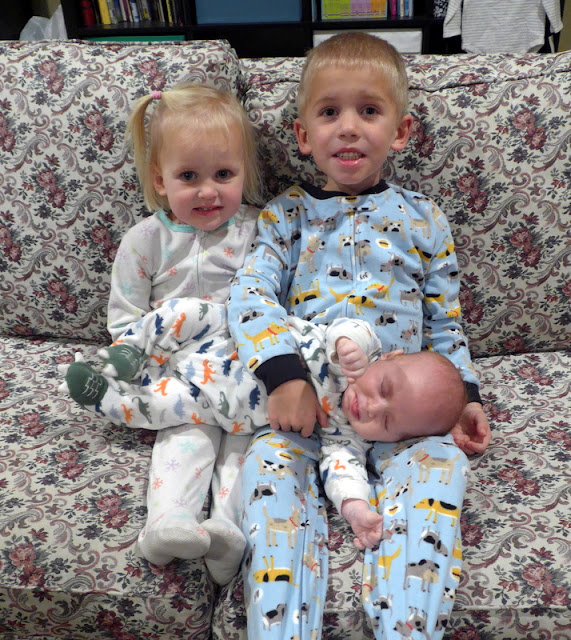 Miriam's reactions were all pretty good as well. She was excited to get the second volume of Goodnight Stories for Rebel Girls: 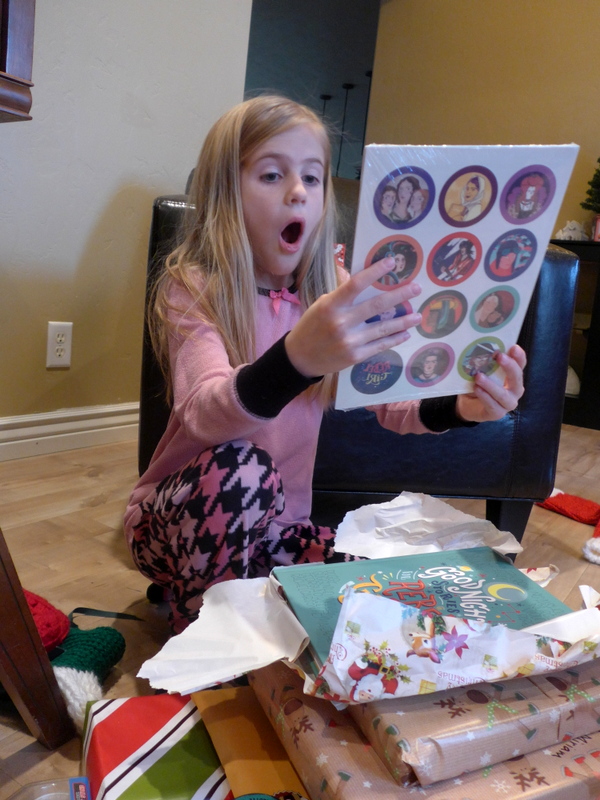 But the pastels were the real winner (I don't think she was expecting a set this big): 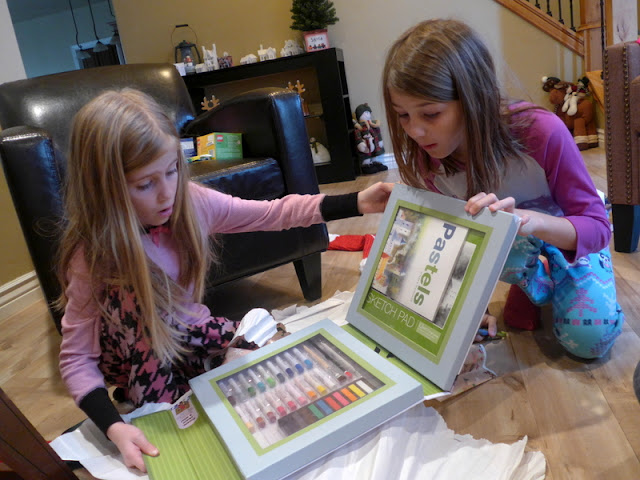 I don't remember the context behind this picture but you get it anyway because...hello! 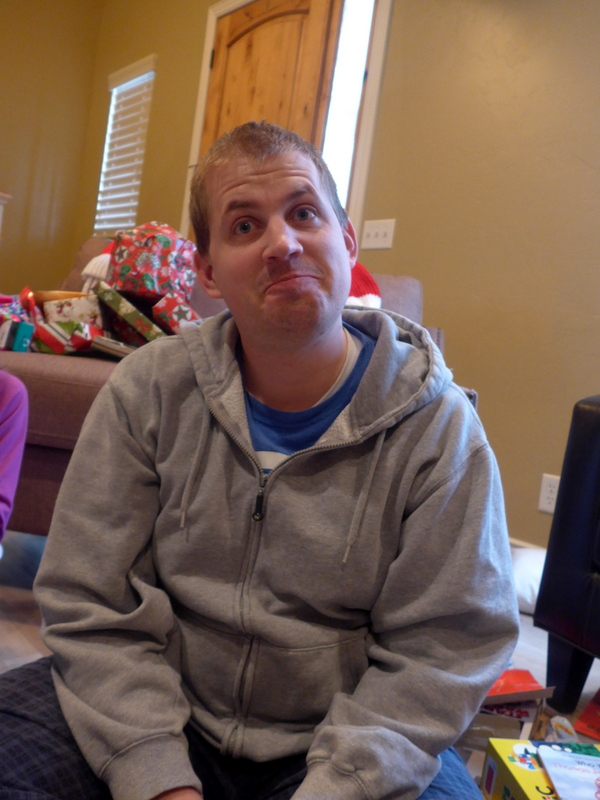 And here's my (believe it or not, best) attempt at taking a selfie with Zoë: 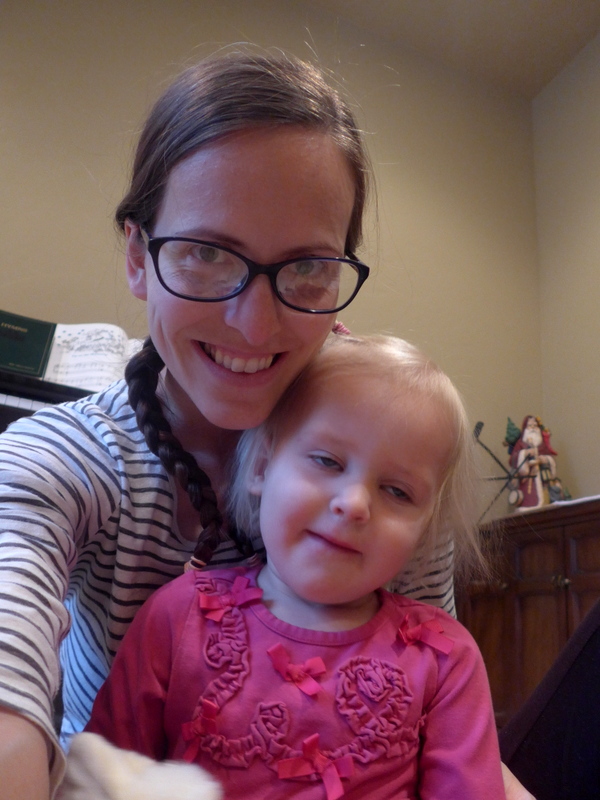 Rachel was excited when she finally got to open her presents. Her favourite one was the Star Wars crochet book (pictured here beside her while she opens up a Harry Potter cookbook (we don't condone nerdiness at this house; we encourage it)): 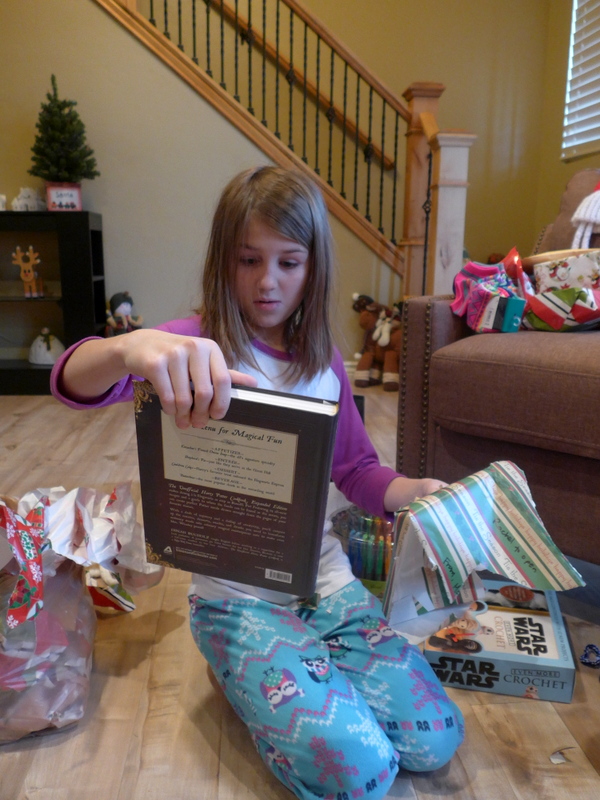 Alexander got some "Who was Alexander _______?" books, which seemed to make him happy: 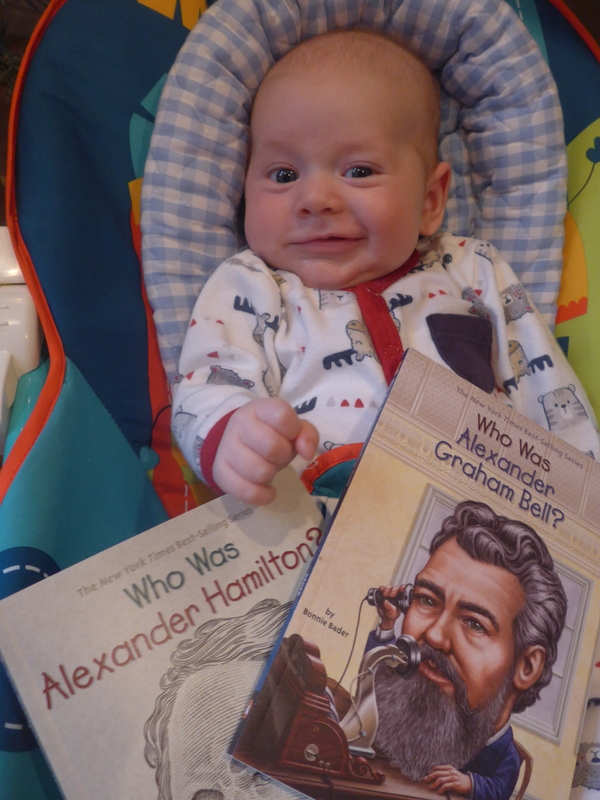 Oh, we gave one of these books to Benjamin as well, only it was Who Was Thomas Jefferson? Benjamin opened it up and the girls said, "It's a book!"

"Not just any book!" Benjamin said, excitedly. "A history book!"

He loves history books. Recently he's been taking Written in Bone: Buried Lives of Jamestown and Colonial Maryland to bed with him (Grandma gave it to the kids for Christmas), and he's slowly reading through it (and having me read bits to him at bedtime). For whatever reason he refuses to admit that he's reading it but when I read it to him he always interrupts me and says things like, "Oh, this part is really good!" and then summarizing the page for me. Maybe he's just saying that he hasn't read that part so that I'll read it to him again? I don't know.

Anyway, he holds up his book and says, "Not just any book! A history book! It's about Thomas..."

He paused to sound out the last name (Thomas is his middle name so he simply recognized it).

And then he got mad.

"Hey! That's not right!" he argued to no one in particular. "Thomas Jefferson was black!" 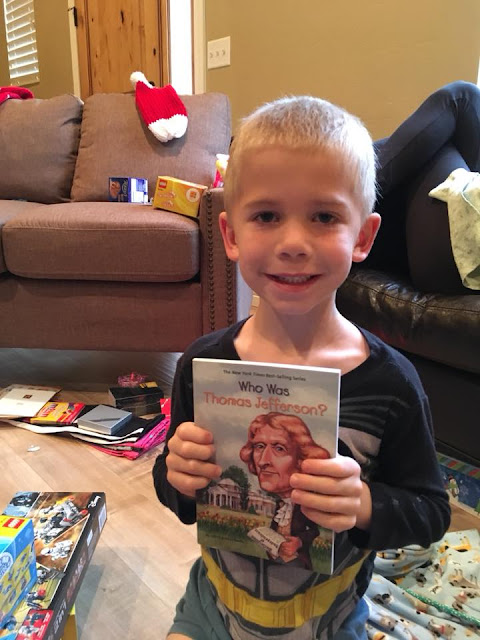 We all thought his little outcry was hilarious because Thomas Jefferson was definitely not black. Perhaps this book with clear that up for him.

I had a French toast casserole in the oven, but we weren't quite ready for breakfast when we finished opening presents. I had to pump, Andrew had to shovel the driveway, we had to wait for company to arrive, etc.

When my sister Kelli arrived with Allen and Stephen she had Stephen take over shovelling the driveway for Andrew, so Andrew took the kids out sledding while we waited for everyone else to show up.

Here's a picture of my sister's family that I took while we were waiting:


The rest of my family was a little late arriving because my mom was waiting for her breakfast casserole to finish baking. My mom brought a pair of red pyjamas for Zoë's llama, which Zoë was incredibly excited about (because Llama, Llama Red Pajama). Here she is running to show me her llama after Auntie Josie got the jammies on: 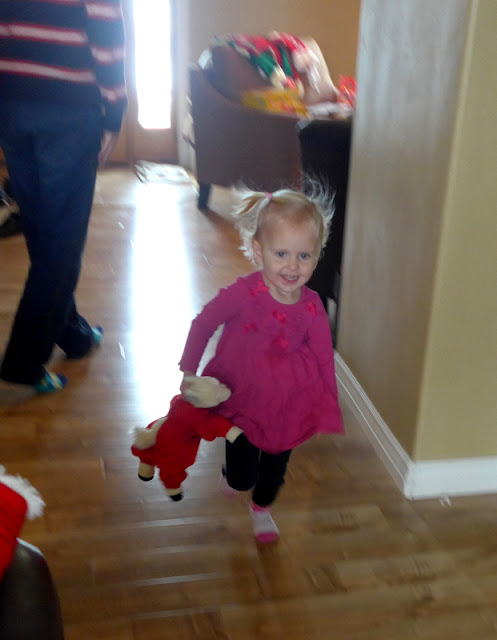 We spent the next few hours eating, visiting, exchanging gifts, and playing games. It was a lovely Christmas brunch. My brother David was down from Prince George, BC, which meant that we had 5/6 of my parents' children there. And we're only missing six grandkids from this picture (and one great-grandchild). I think this is officially the most family members we've had together in one room in years, so that was pretty exciting!