It's here! The moment you've all been waiting for: our 2019 Christmas newsletter/poem!

Today is our 14th anniversary (weird), so I figured it was as good a day as any to publish this installment of our epic poem. I completely neglected to make a 20/20 joke in this poem...so y'all be on the lookout for that next year.

The artwork (which are geese, not rockets) were drawn by Zoë (for Alexander, our resident ornithopihle; the background is from Vecteezy).

You can download a full-sized PDF version here or read the text below the jump: 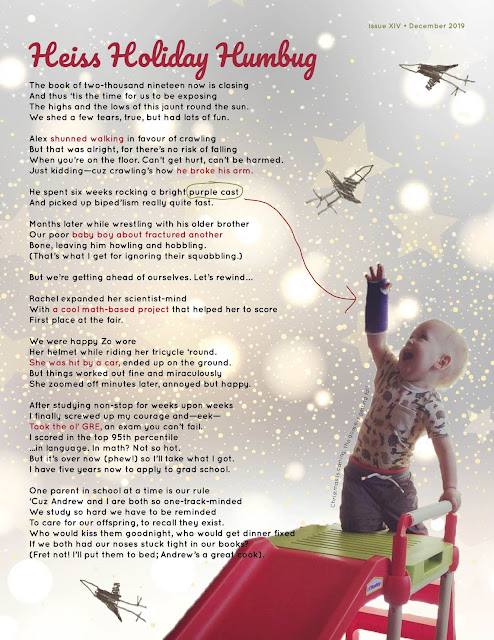 The book of two-thousand nineteen now is closing
And thus ‘tis the time for us to be exposing
The highs and the lows of this jaunt round the sun.
We shed a few tears, true, but had lots of fun.

Alex shunned walking in favour of crawling
But that was alright, for there’s no risk of falling
When you’re on the floor. Can’t get hurt, can’t be harmed.
Just kidding—cuz crawling’s how he broke his arm.

He spent six weeks rocking a bright purple cast
And picked up biped’lism really quite fast.

Months later while wrestling with his older brother
Our poor baby boy about fractured another
Bone, leaving him howling and hobbling.
(That’s what I get for ignoring their squabbling.)

But we’re getting ahead of ourselves. Let’s rewind…

Rachel expanded her scientist-mind
With a cool math-based project that helped her to score
First place at the fair.

We were happy Zo wore
Her helmet while riding her tricycle ‘round.
She was hit by a car, ended up on the ground.
But things worked out fine and miraculously
She zoomed off minutes later, annoyed but happy.

After studying non-stop for weeks upon weeks
I finally screwed up my courage and—eek—
Took the ol’ GRE, an exam you can’t fail.
I scored in the top 95th percentile
...in language. In math? Not so hot.
But it’s over now (phew!) so I’ll take what I got.
I have five years now to apply to grad school.

One parent in school at a time is our rule
‘Cuz Andrew and I are both so one-track-minded
We study so hard we have to be reminded
To care for our offspring, to recall they exist.
Who would kiss them goodnight, who would get dinner fixed
If we both had our noses stuck tight in our books?
(Fret not! I’ll put them to bed; Andrew’s a great cook). 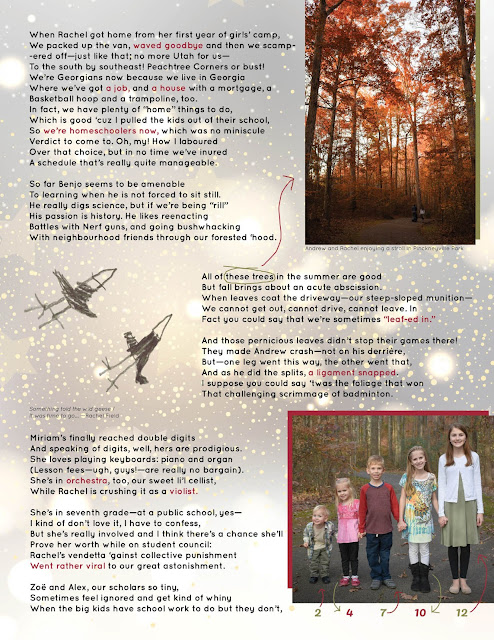 When Rachel got home from her first year of girls’ camp,
We packed up the van, waved goodbye and then we scamp-
-ered off—just like that; no more Utah for us—
To the south by southeast! Peachtree Corners or bust!
We’re Georgians now because we live in Georgia
Where we’ve got a job, and a house with a mortgage, a
Basketball hoop and a trampoline, too.
In fact, we have plenty of “home” things to do,
Which is good ‘cuz I pulled the kids out of their school,
So we’re homeschoolers now, which was no miniscule
Verdict to come to. Oh, my! How I laboured
Over that choice, but in no time we’ve inured
A schedule that’s really quite manageable.

So far Benjo seems to be amenable
To learning when he is not forced to sit still.
He really digs science, but if we’re being “rill”
His passion is history. He likes reenacting
Battles with Nerf guns, and going bushwhacking


With neighbourhood friends through our forested ‘hood.

All of these trees in the summer are good
But fall brings about an acute abscission.
When leaves coat the driveway—our steep-sloped munition—
We cannot get out, cannot drive, cannot leave. In
Fact you could say that we’re sometimes “leaf-ed in.”

And those pernicious leaves didn’t stop their games there!
They made Andrew crash—not on his derrière,
But—one leg went this way, the other went that,
And as he did the splits, a ligament snapped.
I suppose you could say ‘twas the foliage that won
That challenging scrimmage of badminton.
Miriam’s finally reached double digits
And speaking of digits, well, hers are prodigious.
She loves playing keyboards: piano and organ
(Lesson fees—ugh, guys!—are really no bargain).
She’s in orchestra, too, our sweet li’l cellist,
While Rachel is crushing it as a violist.

She’s in seventh grade—at a public school, yes—
I kind of don’t love it, I have to confess,
But she’s really involved and I think there’s a chance she’ll
Prove her worth while on student council:
Rachel’s vendetta ‘gainst collective punishment
Went rather viral to our great astonishment.

Zoë and Alex, our scholars so tiny,
Sometimes feel ignored and get kind of whiny
When the big kids have school work to do but they don’t, 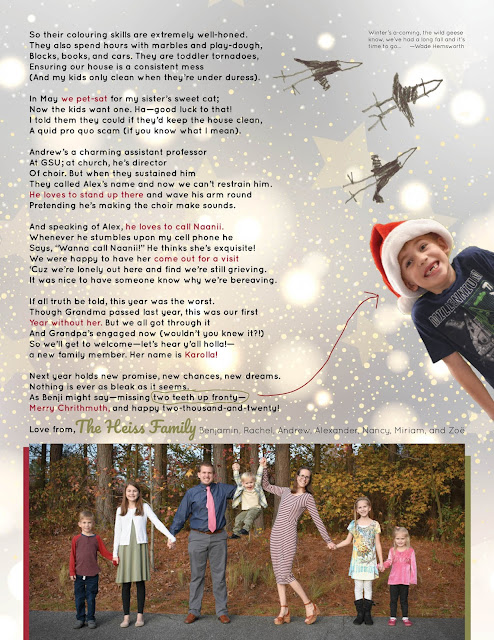 So their colouring skills are extremely well-honed.
They also spend hours with marbles and play-dough,
Blocks, books, and cars. They are toddler tornadoes,
Ensuring our house is a consistent mess
(And my kids only clean when they’re under duress).

In May we pet-sat for my sister’s sweet cat;
Now the kids want one. Ha—good luck to that!
I told them they could if they’d keep the house clean,
A quid pro quo scam (if you know what I mean).

Andrew’s a charming assistant professor
At GSU; at church, he’s director
Of choir. But when they sustained him
They called Alex’s name and now we can’t restrain him.
He loves to stand up there and wave his arm round
Pretending he’s making the choir make sounds.

And speaking of Alex, he loves to call Naanii.
Whenever he stumbles upon my cell phone he
Says, “Wanna call Naanii!” He thinks she’s exquisite!
We were happy to have her come out for a visit
‘Cuz we’re lonely out here and find we’re still grieving.
It was nice to have someone know why we’re bereaving.

If all truth be told, this year was the worst.
Though Grandma passed last year, this was our first
Year without her. But we all got through it
And Grandpa’s engaged now (wouldn’t you knew it?!)
So we’ll get to welcome—let’s hear y’all holla!—
a new family member. Her name is Karolla!

Next year holds new promise, new chances, new dreams.
Nothing is ever as bleak as it seems.
As Benji might say—missing two teeth up fronty—
Merry Chrithmuth, and happy two-thousand-and-twenty!

Love from, The Heiss Family
Posted by Nancy at 12:07 AM