Fun times at the Hogle Zoo

Phew! Today was a long day! We met at Heather's house at ten to arrange carpools. As it turned out, Rachel rode with Heather and I rode with Julia to help her find the right exit. I was kind of nervous the whole way up, hoping that Rachel wasn't screaming her head off for Heather, but Heather had a mirror attached to the back of the seat and Rachel was fascinated by her reflection so was good the whole way up. She and Maggie both fell asleep and so we had to wake them up to get ready to go.

Rachel was a little bit grumpy when we first got in the zoo. There were camels right inside the gate and she was less than thrilled. Her face says it all: "You woke me up for this?" Admittedly, camels are a little ugly. 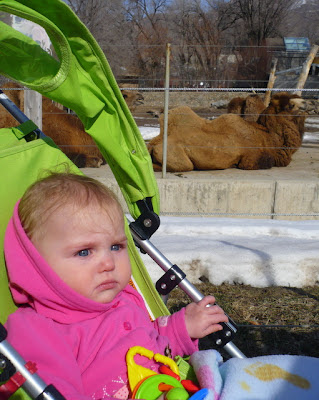 We moved onto something much more charming and Rachel's mood improved immensely. A peacock was displaying his brilliant feathers for all the ladies, and I do mean all the ladies! I have never seen so many women with strollers in all my life. There were probably like 5 guys in the whole zoo--and they seemed rather out of place. 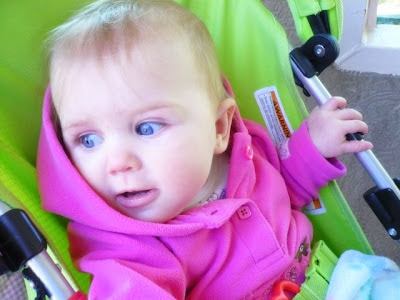 Rachel and a peacock 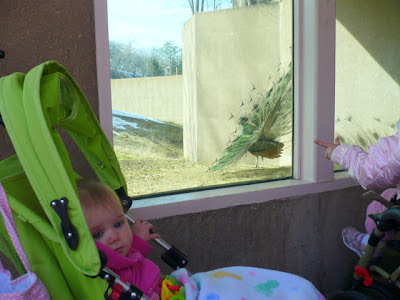 We ran into Aunt Katharine and cousin Kayl at the peacocks. They were at the zoo with some of their friends. We would have liked to have stayed and chatted longer, but we only had enough time to snap a few pictures before our playgroup moved on. Between the six of us we had thirteen kids in tow (I was the only one with one baby there) and it was hard to keep all of them excited about the same animal for long. Plus, since Rachel was using one of Heather's car seats we kind of needed to keep up with her or we'd have been stuck in Salt Lake forever! 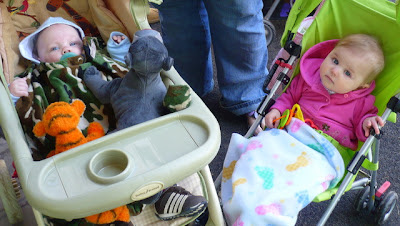 So Rachel and I followed our troupe into the primates house. There was this cute baby orangutan in there who was just cracking me up. He reminded me of Rachel. He kept playing around and flirting with the crowd but would run off to his mother, who was sleeping in the corner, to suckle for a few seconds and then would be off playing again.

Baby orangutan hamming it up 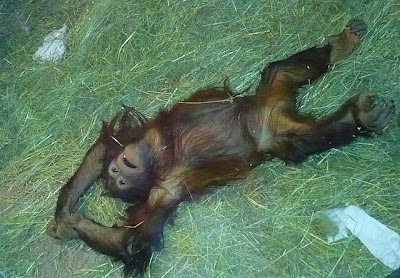 All the monkeys aren't in the zoo--everyday I see Rachey-roo! 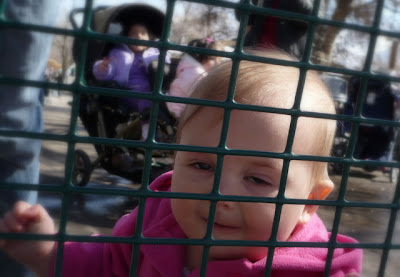 I think I know exactly how that mother orangutan felt! Nap, baby, nap! I just wish that I had the leisure to curl up under a haystack sometime to hide from my own little monkey! But I'm not sure it would help. Even though this mother is hiding, she doesn't look like she's found much respite.

Soon we were off again. Rachel was a little young for the zoo. She wasn't really interested in many of the animals because they were so far away--I tried pointing them out to her, which she thought was just a fun game of "try to grab mom's finger" and not "look at that cool animal over there." But she had fun walking around and playing with her seat belt and trying to hold hands with anyone who passed by her, whether or not we knew them. At one point Kim and I had a triple stroller going, with her twins in a double joined to Rachel's stroller by all those little baby hands.

Me and Rachel with the elephants 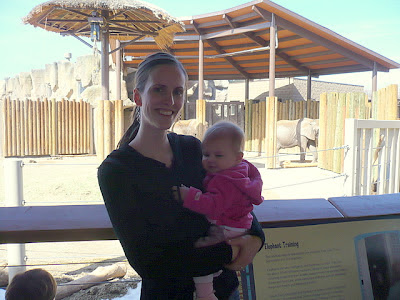 With an elephant statue 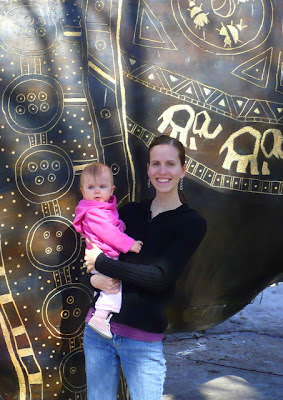 Rachel with the elephants 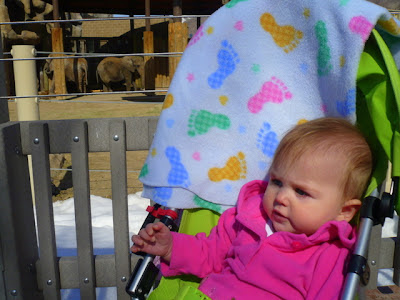 Rachel and a zebra 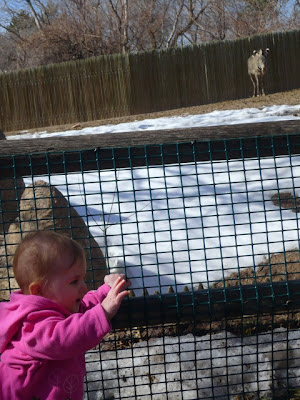 Some of Rachel's favorite animals were the penguins because they kept running around and coming up close to the fence. She thought they were funny. 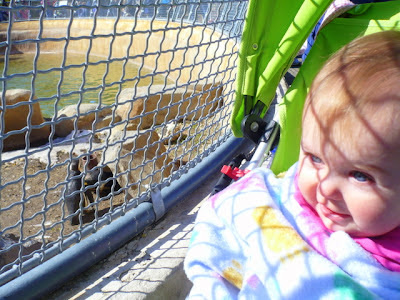 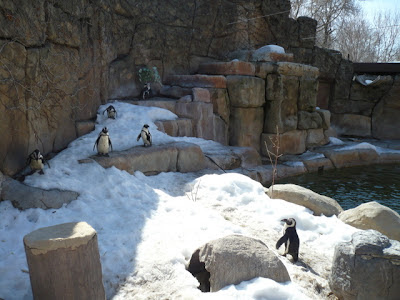 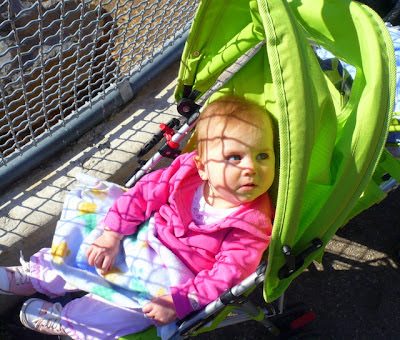 She also liked the giraffes. There was a little baby giraffe, born just this past November--the zoo is booming with baby animals this year. Of course, the giraffe wasn't that little anymore considering it was bigger than me when it was born. But it was still markedly smaller than the others in the giraffe house so it was cute. Rachel liked the giraffes because they kept walking around and they were really close up.

Me and Rachel and some giraffes 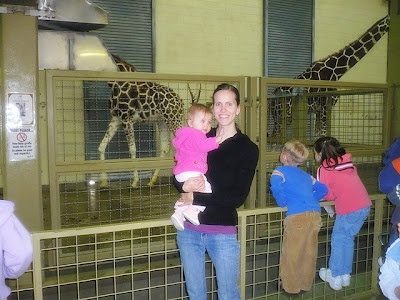 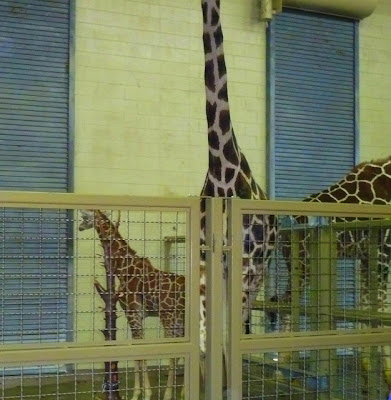 Then, of course, there were the reptiles. You know Rachel and her reptiles. She's always pretty interested in those!

Rachel and a reticulated python 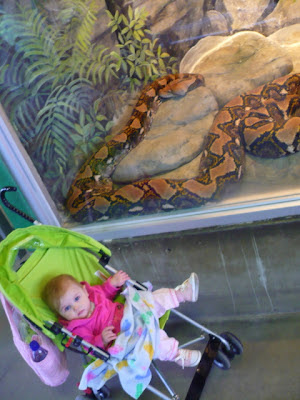 Rachel and a White American Crocodile 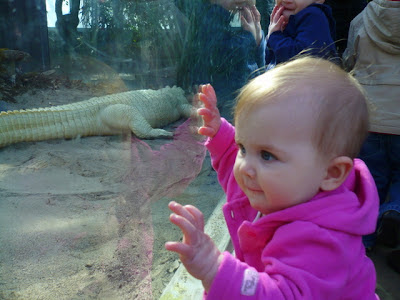 By the end of the day the kids were pretty tired, but not too tired they couldn't keep playing. 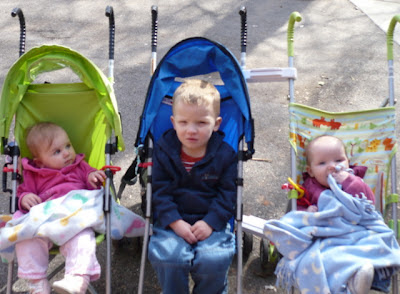 Rachel tries to catch Ian, who was playing peek-a-boo with her 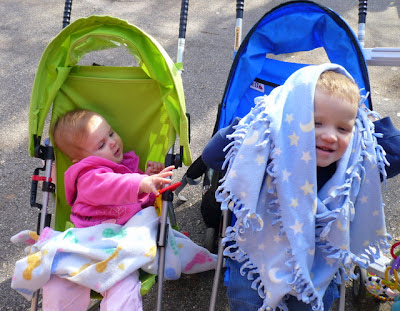 Rachel and Maggie sucking on a stroller strap and a soother, respectively 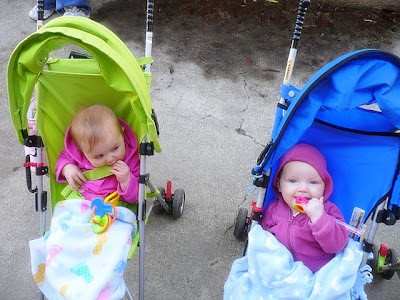 Heather and I were two of the last moms to leave. We slowly lost our ranks as Kim and Natalie both left and then Heather and I got separated from Julia and Annette. The last we saw them, they were leaving the small primates house and heading toward the crocodiles--we followed them to look at the crocodiles but never met up with them. After searching around for a while we decided to take off. 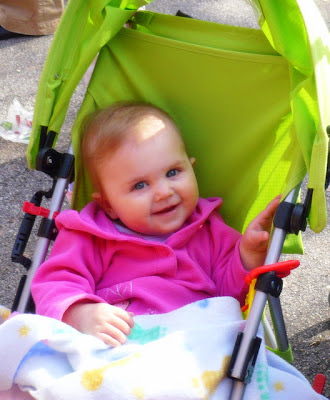 We got home shortly after four. That was a six hour play date--no wonder I'm exhausted. Unfortunately, that little monkey of mine is not. She spent most of the day cooped up in her stroller (while I pushed) and doesn't think she had much of a chance to get her wiggles out today, although she did plenty of wiggling in my arms and in her stroller, in my opinion.

She's currently pulling herself up on anything and everything she can, while squealing like a banshee and throwing toys all over the living room. Excuse me for sneaking off but I need to find a haystack to bury my head in.
Posted by Nancy at 6:39 PM