Finally, after being sick for three days and acting like nothing was wrong, Rachel is starting to "act" sick. All day today she wanted to sleep and cuddle. She still tried to play like she had been doing the past couple of days but after a few minutes of crawling around she would lay her head down on her arms and rest. She has stopped looking surprised when she coughs and now just accepts it with a little moan. No more laughing fits after she's done coughing. She's more likely to whine and cry now.

What kind of a cheesy smile is this? 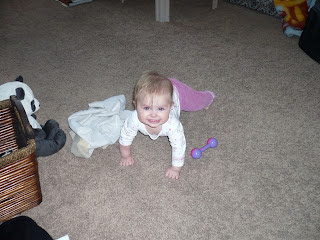 Not that I'm happy that she's acting miserable, it's just that I'm glad she's normal. 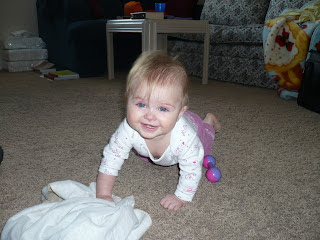 I'm also glad that she's decided that sleep is trendy once more. Last night was the first time she slept all through the night in a week! She slept from 10 PM to 1 AM, from 1(ish) AM until 7 AM, and from 8 AM until 11:30 AM! She still took two naps today and put herself to bed at 8:00 (a good hour before bedtime). 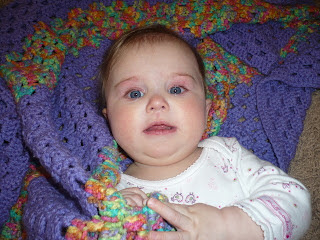 Her cough seems to be improving, although she did cough so hard that she spat up, quite violently, all of her breakfast...while we were on the potty. That was neat. Spitting up, coughing, nose dripping, and doing her "business" all at the same time. I panicked and called for Andrew, who luckily was still home. But really, she does seem to be doing better. Her fever is lower--it was completely gone this afternoon but came back this evening. These things are always worse at night for some reason.

Chillin' on mom and dad's bed 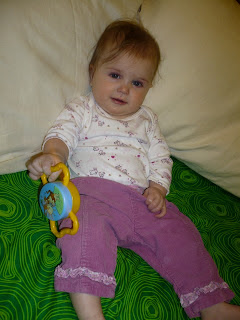 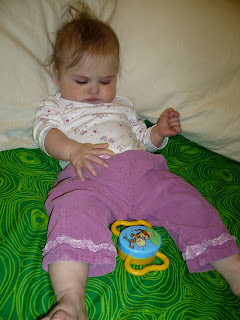 I don't know why she's acting miserable now since she was much sicker on Saturday and was in high spirits. Oh, well. It's kind of nice that she's so cuddly and sleepy. She doesn't even really wake up when she coughs. She just shifts position.

She was in bed with me this morning and kept coughing. Every time she had a coughing attack she'd roll over or push up on her hands and legs and crawl forward a bit. At one point she was sharing my pillow. The next thing I know she's horizontal on the bed. Then on top of me. Then on the other side of the bed. It's kind of crazy.

A few minutes ago she started coughing and I thought she'd just rearrange herself and go back to sleep, but she didn't. Apparently she had had one cough attack too many and moved a bit too much in her crib. 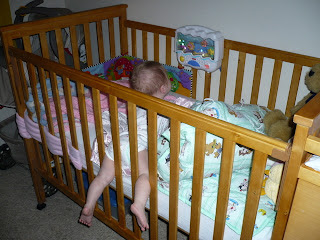 I think she has a headache because she did have her head up, screaming, but every time the camera's "focus light" (I have no idea what it's actually called) came on, she'd bury her head. And she keeps her eyes clamped shut if she's on her back and there are overhead lights on. Poor baby. 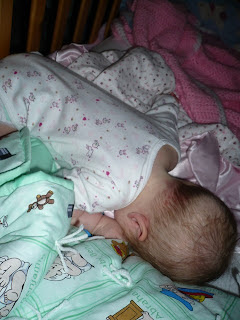 I took her out and comforted her and pulled a pair of sweats on her (she didn't want to lay down long enough to get in official pyjamas) then gave her some Tylenol and cuddled her to sleep again. I hope she gets better soon!
Posted by Nancy at 11:29 PM