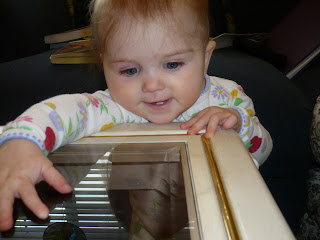 Somehow Rachel turned seven months old without anyone realizing it. On Thursday Andrew's boss asked Andrew how old Rachel was and he said, "Almost seven months."

Unfortunately, she was already seven months old on Wednesday. How did our baby get to be so old? She's just growing up so quickly!

Among spitting, shaking her head, pulling herself up on things, crawling all over the place, drinking from cups, making big messes with her toys, taking baths, reading stories, playing with friends, screaming when she should be being quiet, and going outside, one of Rachel's favorite thing to do is to crawl under things and sit. Sometimes she'll sit and play, other times she'll just sit and look proud of herself.

I think she'll like building forts when she's a bit older. She just strikes me as someone who would like doing that. 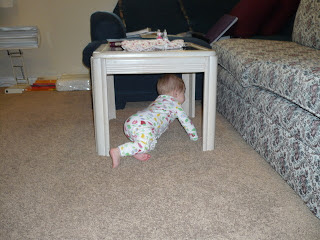 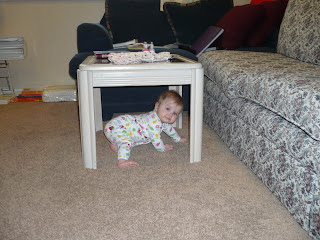 She also enjoys playing with anything that has buttons, lights, and noise--namely the computer, the DVD player, the receiver. The other day she started playing my yoga DVD, switched the language to French and went to some "how to" chapter. She got on Andrew's computer and made all the tool bars in Illustrator disappear. A few minutes later she made them reappear. She loves to watch slide shows and movies of herself. She will shriek and laugh and point at herself. She also likes pictures of mommy and daddy but finds everything else a little boring right now.

Although she has braved the wood floor, she still does not like getting her hair done, being put in her car seat, or having things taken away from her, especially if said thing is dangerous.