"Tomorrow's your anniversary!" my doctor said. "And how big was the baby you delivered at 33 weeks, 4 days?"

"And your other babies?"

I'm slightly terrified. I had an ultrasound today to check the baby's growth. She's doing great but, uh, she measured 5 lbs. 13 oz. (a full pound heavier than Benjamin was at this stage in the game), and I still have six weeks to go.

"It does look like she's aiming to be a bit bigger, but you'll do fine," my doctor said. "You never can tell what's going to happen when you shake the tree of life. My guess is she's pulling some big genes from somewhere because your numbers are great—textbook great. I can't really make any suggestions to your diet or exercise because everything looks great."

So great, in fact, that I've been given permission to check my blood sugar only three times a day (what an honour) rather than four. That might not sound like a huge thing but, honestly, it made me almost giddy.

And my blood pressure is great.

And my cervix looks great.

I'm the most boring high-risk pregnant lady he knows of (but, he emphasized, I'm still high risk).


He asked if I'm planning on having any more kids after this one and I said, "I don't know. This pregnancy hasn't been very much fun, so maybe not."

"Well, you are high risk," he said again. "High risk pregnancies are never fun. We kind of make them that way by turning you all into human pin cushions. But some people just like kids and want to have a whole bunch. Do you stay home full time?"

"Right in the trenches. That's a tough job. My wife decided she wanted to stay home with the kids after we had our third baby. She lasted three months before she was begging to go back to work, so off she went. I didn't want to stay at home with them either! But it's a good thing for kids if you can do it; they'll be fine without having a parent at home, but if you can do it, it's a good thing. You must like it, though, to be on your fourth. Some women have breakdowns in my office over two kids, and here you are, expecting your fourth, as calm as can be."

"Well, if you had asked me yesterday," I said. "I probably would have had a breakdown as well, but today's been much better."

Plus, I'd just had an hour all to myself waiting in the lobby and having an ultrasound, which is as close to a spa treatment as I've ever had. Andrew came home to watch the kids this afternoon so I could go off and, as I joked, "let other men rub my belly for a couple of hours."

This was actually my first appointment with a male doctor (my clinic rotates through practitioners and I've had all female doctors until today).

Hearing such laudatory remarks about being a stay-at-home parent really made my day because (A) yesterday was rough and (B) I had an annoying conversation with Rachel the other day.

"I can't wait until I'm a grown up and can move out of the house and do whatever I want, whenever I want. I can watch as many Doctor Who episodes in a row as I want and do the dishes when I want and..."

"Being a grown up is harder than you think," I said, bursting her bubble. "You'd have to have a job so you could pay your bills. You'd want to go to college so you can get a good job and that's a lot of hard work, too."

"What if I just get your job?" she asked.

"Well, if I was just a mom I could sit at home all day and do nothing like you."

"I don't just sit at home all day and do nothing," I said.

"Well, you don't do very much," she retorted.

I whined about this conversation to Andrew, while I folded yet more laundry last night, and said that the kids would label me the Wicked Witch of the West again for leaving them piles of clean, folded laundry to put away again (how dare I when all I do is sit around and do nothing?). He said he'd fix it. And he did.

I guess he gave Rachel a lecture over breakfast this morning and then had her put away everyone's clothes for them because when I woke up this morning there were no Benjamin, Miriam, or Rachel piles to be seen.

And in addition to trying to keep a household running, I'm a human incubator, for crying out loud! Cut me some slack, children!

I feel so accomplished, having carried the baby this far along—I've been holding my breath and crossing all my fingers and toes that we'd beat Benjamin's in-utero record (which we'll do tomorrow). It doesn't look like this baby will be coming anytime soon. I had a fetal fibronectin test done last week (basically a swab to see if the cells holding the fetal sac to my uterus are shedding) and that was negative, which means everything's sticking where it should be (so birthing isn't eminent).

Those fiery butt-darts (17P) seem to be doing their job and I only have three left! Hurrah!

They've actually become less painful than they were in the beginning. At first I always felt awful for days after having them. Now it's more like a dull pain—a how-did-I-get-this-bruise pain, rather than a put-me-in-a-wheelchair-now pain.

Hopefully next week I'll get a different nurse though. I've had the same nurse for three weeks in a row now and...she's not my favourite.

I did, however, finally manage to switch to a new glucometer and test strips, so I won't feel like I'm bleeding money in addition to simply bleeding blood every time I check my blood sugar (which I only have to do three times a day now, thank you very much). My doctor couldn't get it to pop up on the list of approved systems for me because the system always checks primary insurance first (but I'd already called to approve this with my secondary insurance) so he wrote out an old-fashioned prescription for me to carry to the pharmacy in my hot little hand (rather than sending an electronic prescription over).

It took the pharmacy about a half hour to work out insurance details on their end, but they finally did it, and as much of a headache as it was, I think it was worth it.

Here's Zoë saying hello (that's her arm in front of her face): 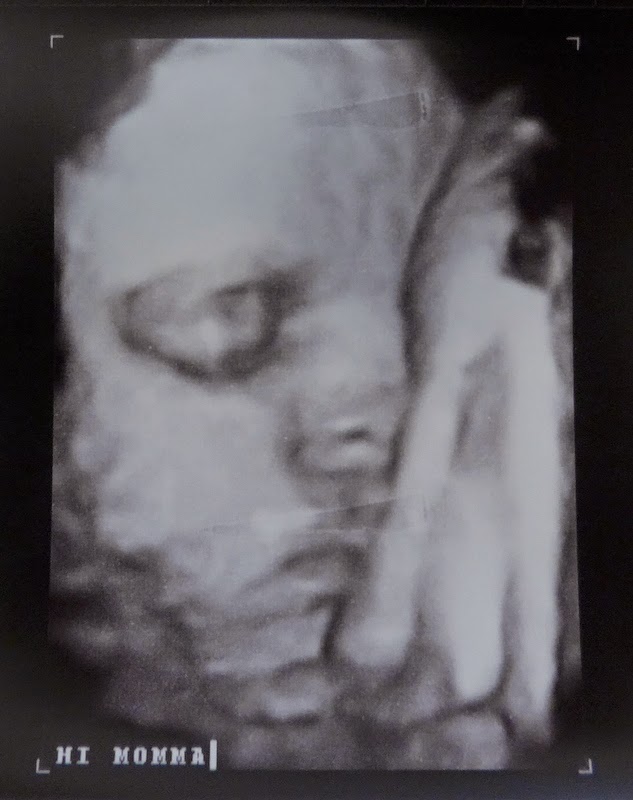 "Did I tell you whether it was a boy or girl last time?" the sonographer asked while he was measuring her femur.

"You said it was a girl," I said, "But my husband asked me to have you check again to make sure; we haven't even discussed boy names!"

"That's about as clear a picture as you could ask for," he said, pausing the frame to show me. "It's all girl as far as I'm concerned."

She's in a good position—head down, legs tangled up in the right side of my rib cage. All I could do was nod when he said, "And here are her feet," because it's been pretty obvious to me where her legs have been stationed for quite some time now.
Posted by Nancy at 5:11 PM