This morning I took the kids to the park. We walked, of course, and Miriam asked if she could run ahead all on her own so I told her that she could and as she ran down the road she spread her arms wide and said, "Hooray! I'm as free as the wind!"

We had a pretty fun time at the park but eventually decided we should go home for some lunch. On our way we stopped by an adjoining neighbourhood to make contact with one of the sisters I'm supposed to visit teach but who I haven't been able to contact. I only realized this month that she lives within walking distance from us, so we stopped by on our way home.

She was sick and napping, but I did get to chat with her grandmother who was tending her children. She has a daughter Miriam's age and a younger son (just over a year old, I believe). The phone number I was given was rather outdated, but I now have her cell number as well as the grandma's cell number (four generations live in the same household). I'm going to see if she'll join as at the park one of these beautiful spring days...when we're all healthy again.


Benjamin's apparently got a cough again and was quite miserable this afternoon. I put him down for a nap with a fever of 101°F, but I'm still not entirely convinced that he's sick. He's been coughing since October, practically, and I'm sure all this pollen isn't helping matters. Oh, and he's teething—finally! He's 2 years, 10 months, and 19 days old and he's finally, finally getting his two-year molars!

His gums have been swollen on the lower right side of his mouth for months and today he was complaining again that his teeth hurt, so I had him open up so I could see and I spotted a tooth...on the bottom left. It's just breaking through, as well as the one on the top right. His bottom right gum remains ridiculously swollen and his top left gum is all bruised up. He's pretty miserable (chewing on things he shouldn't like books and people, stuffing his whole hand in his mouth, drooling, and crying) but I think we'll make it through this.

I asked him if he wanted me to give him a teaspoon of honey to help soothe his cough and he said that he did...and then brought me a 1 cup measuring cup.

"This is definitely not a teaspoon," I said.

Even thinking of consuming that much honey in one sitting is making me shudder.

He willingly took a nap this afternoon and when he woke up I let him just relax on the couch with some shows while I put his sisters to work shucking corn and helping tidy up the house. The sister missionaries were slated to come over for dinner and our girls were rather excited about this. We've only been having the elders over because, frankly, I haven't felt like driving around and picking people up and making sure dinner gets on and cleaning the house and taking care of the kids. So I've been signing up to feed the missionaries on days when I know Andrew can do some of that, but now that the semester is over and he's a little more at my disposal I felt like we could branch out a bit.

Turns out that even though it wasn't the sisters' week with the car they were able to get it for tonight, so I didn't even have to pick them up. We did a barbecue outside (so all of Benjamin's coughing wouldn't go spewing out onto the kitchen table while company was over) and Andrew grills the meat in this house, so all I had to do was vegetables—and I made the girls shuck the corn, so...I didn't end up doing much.

We had a lovely visit with the sisters; they gave us lesson about The Wise Man and The Foolish Man—and being sure to build our lives "upon the rock of our Redeemer, who is Christ, the Son of God...which is a sure foundation, a foundation whereon if men build they cannot fall."

Benjamin was a riot, coughing like crazy and all covered in ketchup (with a little dot of mustard on his nose) and running around showing off for the sister missionaries. They seemed to think he was adorable, which he is. He's also a menace—but an adorable one, I suppose.

The kids went down to play on the swing set for a while until they collided and Rachel ran up to the house screaming and spitting out blood. She immediately blamed Miriam for the mishap, but Miriam swears she was "swinging straight" and that it was Rachel who'd gone crooked, which I believe because it's rather difficult to get the swing Miriam was on to go crooked in the first place.

I'd like to lengthen the beam the swings are attached to so we can spread them farther apart, personally. I just think they're ridiculously close together. I realize that's how the swing set came, but still.

Anyway, long story short, Rachel knocked her two front teeth loose. They were already wiggly enough that she was having trouble eating her corn off the cob (I had to cut it off for her (meanwhile Miriam ate two and a half cobs all on her own)) but she knocked them good. Whereas they were sometime-in-the-next-six-months wiggly, as of this evening they're any-day-now wiggly.

"How did your face hit Miriam's swing, exactly?" I asked.

Everyone agreed this was an excellent question. I mean, her head is all the way at the top of her body and the swings are all the way down by the seat of her pants.

"Oh, I was leaning backwards," Rachel explained simply. "So I was completely upside down and..."

"Your face hit the bottom of Miriam's swing?!" Andrew guessed.

"How do you even still have a face?!" I gasped. "You're lucky you just knocked your already-wiggly teeth and didn't rip off your nose!"

Seriously. This is our swing set (from December 27, 2013—but it looks pretty much the same now): 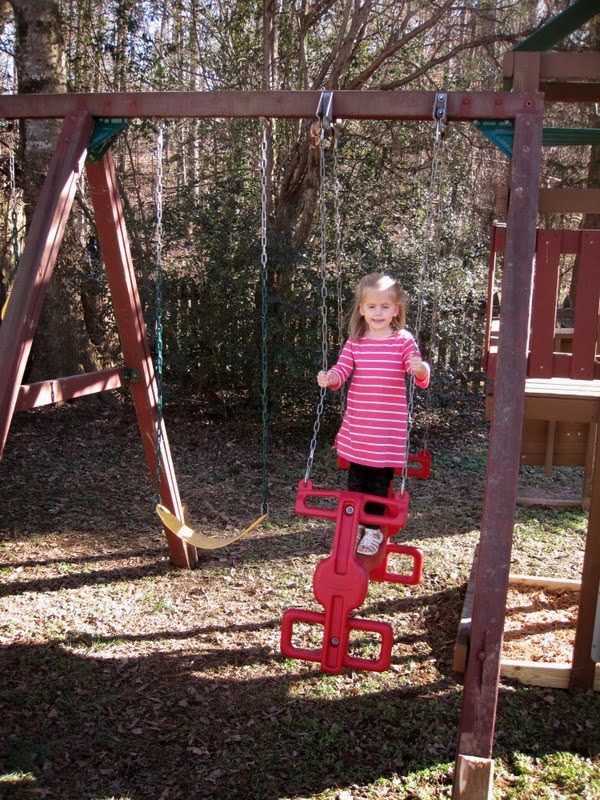 Rachel was on the yellow swing and Miriam was on the red swing. Don't you think spreading those swings out a bit would be a good idea? I'm not an engineer but I'm sure the beam could be longer without completely collapsing.

At least Rachel's fine and her face is (mostly) fine.
Posted by Nancy at 9:48 PM