Naps and soccer and things

In order to get Benjamin to go to bed before 11:00 at night we took away his afternoon nap. Some days he's fine until bedtime and then falls asleep very nicely. Other days he crashes in the late afternoon and it doesn't matter if he sleeps for an hour or five minutes—he'll stay awake as long as he can after bedtime. For example, he took a five minute nap in the car today and he just barely fell asleep.

Probably not by having soccer practice until after 7:00, that's my guess.

Anyway, Benjamin crashed yesterday afternoon as well. I think playing hard outside all day is wearing him out more than being trapped inside during the winter did. He and the girls were watching Signing Time on Netflix because Auntie Katharine had said that Kayl likes to watch it and we thought that if we watched it too then the kids might just learn the same signs as Kayl (who has some communication barriers) and it might be fun to use those signs the next time we see Kayl.

Soon though, this was the scene on the couch—Benjamin fell asleep and collapsed on Rachel's lap (Miriam was diligently mimicking signs, off to the left of this picture): 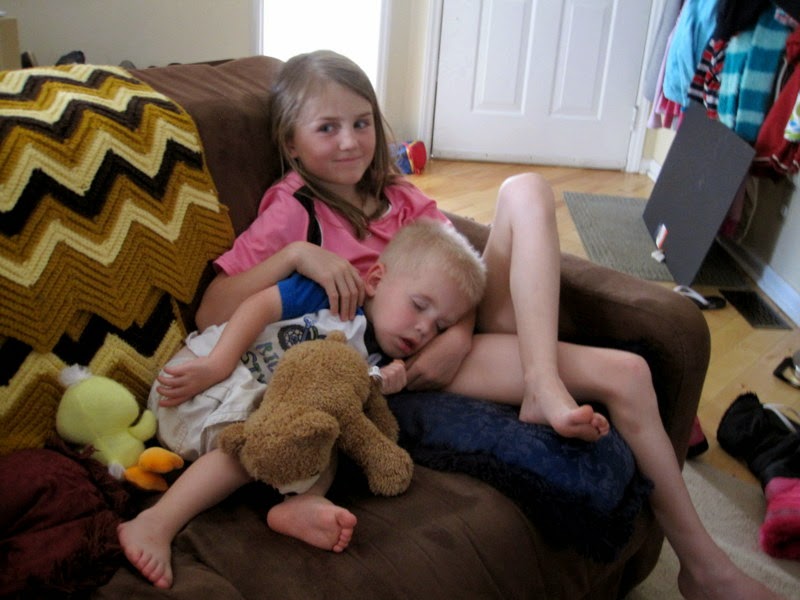 Clearly Benjamin wasn't going to pick up any sign language that way! 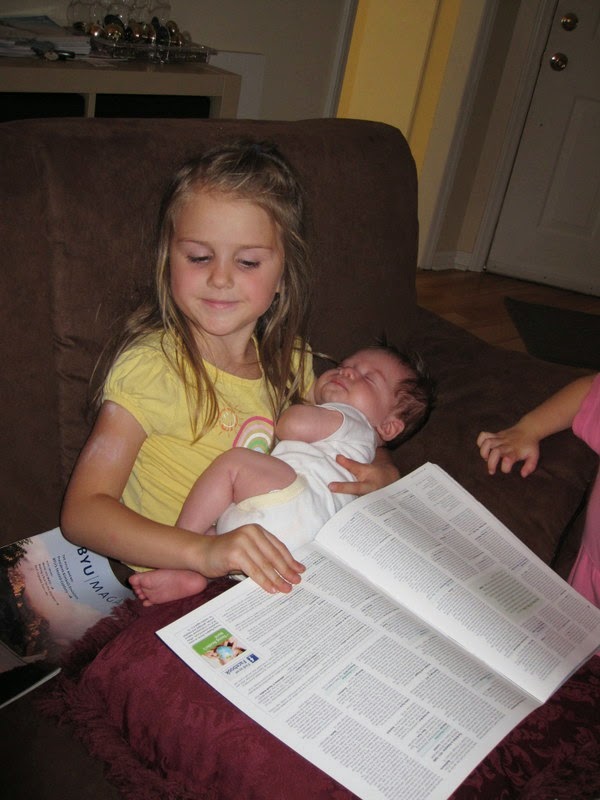 How did that tiny baby grow into that great big boy?! And how did that little kindergartener turn into that gangly grade two-er?!

I don't know about him but she's going to be a big help when the baby gets here, I'm sure.

Anyway, we had soccer practice this evening, which is always a bit of a circus. The kids played outside while I made dinner and Daddy arrived home after we'd already begun eating. We scarfed down our meal and then ran around the house collecting water bottles and shin guards and things.

Andrew had to do a few things but the kids were begging to get in the car, so I unlocked it for them and let them outside while I packed up a few things I needed: glucometer, cell phone, wallet, keys, water bottle...

When I looked outside to check on the kids, who were supposed to be buckling into their seats, Benjamin was sitting in the front passenger seat. I shook my head at him sternly and by the time I made it out to the van he was sitting in his car seat with a look of pure innocence on his face.

"You're not supposed to play in the front seat," I reminded him as I did up his buckles. "You just hop into your seat and try to buckle yourself in, remember?"

By this time Andrew had hopped into the passenger seat, so I climbed in and started the car. Hot air immediately started blasting through the vents.

Somebody had turned the heat on full blast. I turned it down but it was still rather noisy.

Somebody had turned the rear heat on full blast as well. I turned that off and noticed a light was on.

"Would you mind switching that off?" I asked Andrew. "Benjamin was in the front seat."

I can't remember what else that boy messed with, but Andrew fiddled with everything until all was right with the world, except that we were running late.

"We're going to be so late!" I said. "How is this even possible? I was aiming to get out of the house by quarter to six!"

We dropped Andrew and Rachel off at their field and then took off for Miriam's field. We arrived fifteen minutes late but miraculously found a close parking spot. Benjamin was fast asleep.

And she was off!

I unbuckled Benjamin's straps and patted his cheeks and called his name until he peeked up at me.

So we shuffled along to make sure Miriam made it to her field before continuing on our post-dinner diabetes walk. She had. And there was, like, no one there, which was weird. Her coach was there, as well as a few other children. But, really the field was quite empty. I figured it was because spring break was still in session for some families (like ours).

"We have to get our laps in quick," I told Benjamin, "Because we're running late today! We need to finish so we can be back in time to pick Miriam up when she's done."

We booked it around the school a couple of times before going down to the field to watch the rest of Miriam's practice. There was a dark, looming cloud gathering in the distance so I pulled out my phone to check the forecast. I had a text message from Andrew.

"BENJAMIN!" I texted back.

And then Andrew was worried about what horrible thing he'd done to make me respond like that, when all that I meant was that Benjamin had been fiddling with everything in the front seat so he's probably the one that set the clock ahead twenty minutes.

That totally explained the empty parking lot and soccer field, which by this time were quite full.

Anyway, there was a storm looming in the distance and it just kept looming closer and closer. When it started spitting out thunder and lightning we called it a day (with good reason) even though it wasn't quite time to end practice. Miriam was so spooked that she ran all the way back to the van. We got buckled as quickly as we could so we could go pick up Rachel and Andrew from their field. They'd also cancelled practice early because of the lightning and were among the last to leave because they had to wait for us. Andrew reset the clock on the ride home.