A day at the museum

One of Rachel's requests over spring break was a visit to the Museum of Life and Science; she thought it was high time she got to go, too, since I've taken Benjamin and Miriam who knows how many times while she's been at school.

We're taking spring break pretty easy this year—I'm not supposed to do any traveling, like, at all, and Andrew's getting ready to defend his prospectus so doesn't feel like he can take any time off, anyway. Our plans are few, but a trip to the museum was something I could make happen so this afternoon we went.

I was due for a post-lunch "workout" so I told the kids we were going to walk to the far end of the complex first and then make our way back, so that's what we did. And my blood sugar levels were just fine when I checked them. My morning, breakfast, and lunch numbers are usually good. It's my post-dinner numbers that get questionable.

One day this week I ate the very same thing for lunch and for dinner and then did the exact same amount of exercise after each meal and yet my evening number was close to maxing out while my lunchtime number was just fine. Super lame. Anyway...

We walked all the way to the bear exhibit; the bears were out by the waterfall, which is unusual for them from my observations. Usually they're on the other side of their habitat. 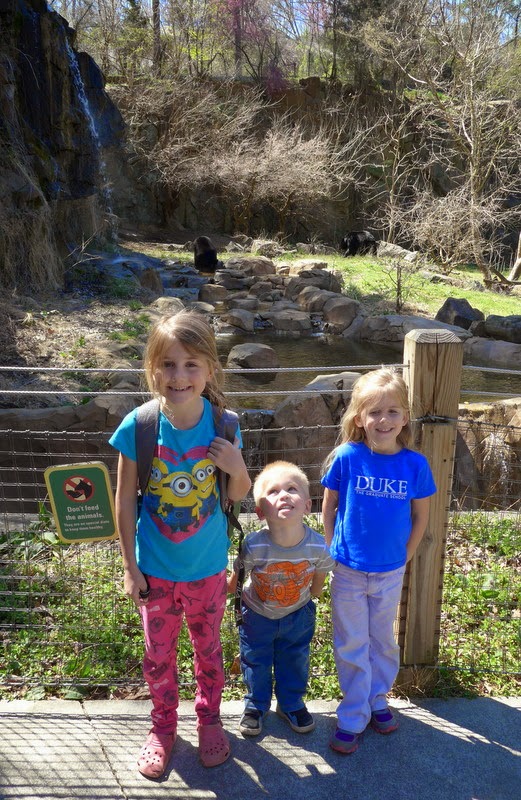 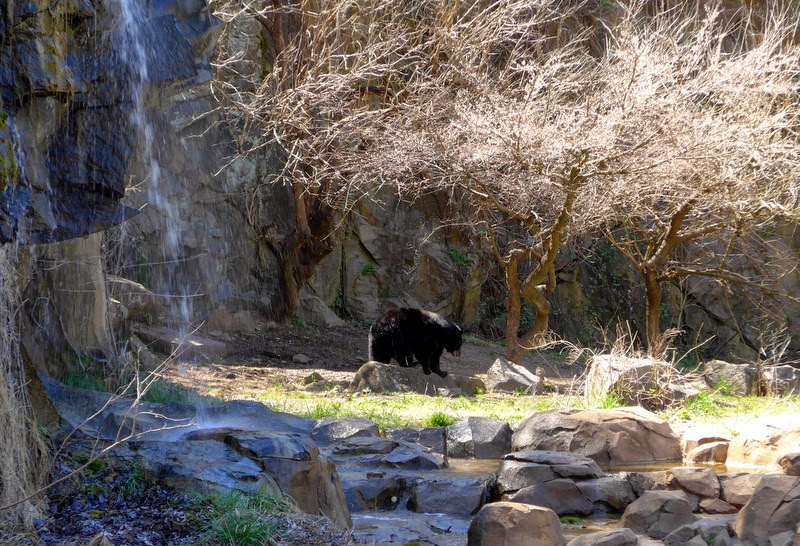 They put new tower viewers in at several places along the "Explore the Wild" trail, which Rachel enjoyed using since she was the only one tall enough to reach. 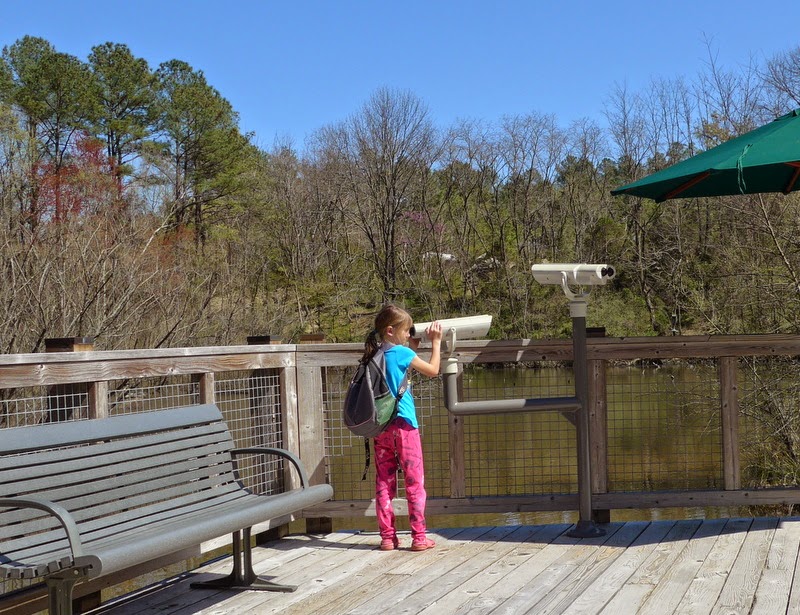 We stopped to admire the sailboats. It was a beautiful breezy day so some of the boats were moving quite fast. "Wee-haw!" Benjamin cheered. 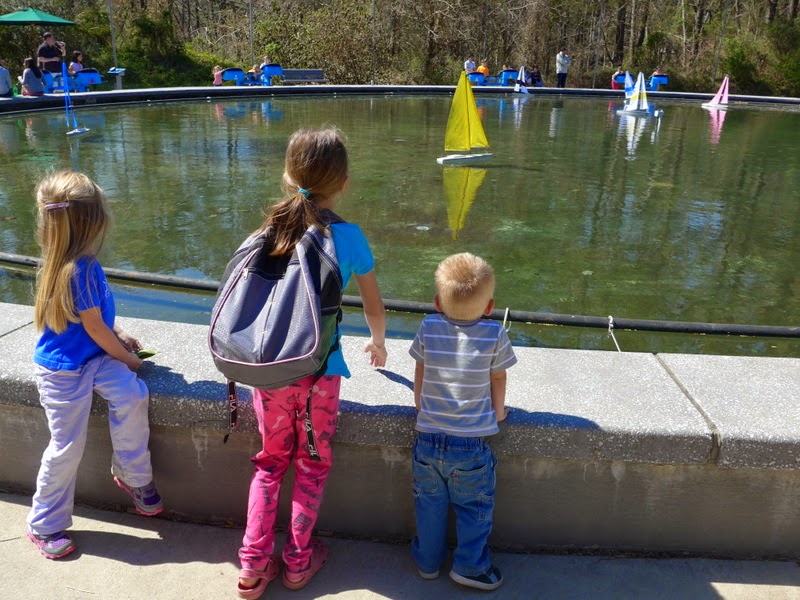 The kids wished they could've taken a turn steering but the museum was packed today (because it's spring break, probably) so we moved on to "Into the Mist," which is all the kids wanted to do, anyway. They'd been playing outside all morning and all afternoon and were looking forward to cooling off in the mists. They got drenched and didn't even complain of being cold even though it really wasn't that warm. 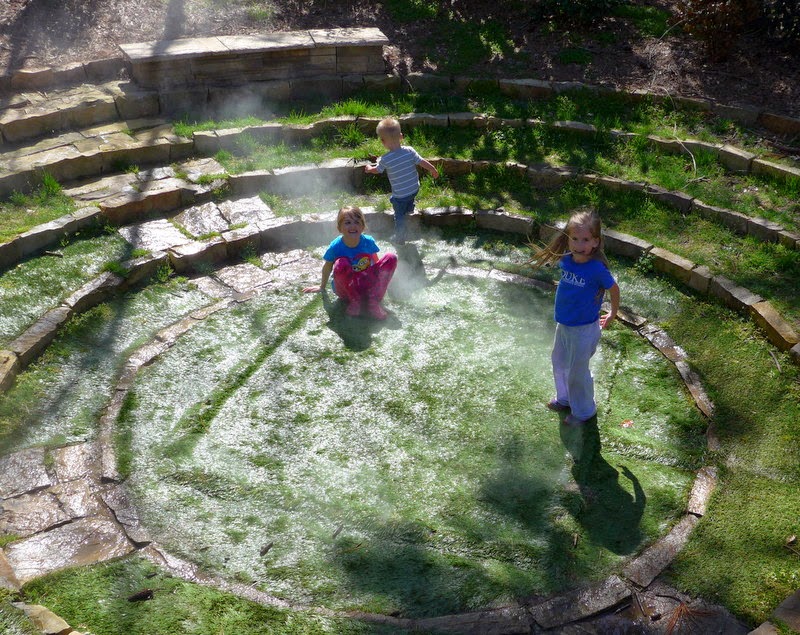 We spent quite a bit of time at the "airborne seed" exhibit where Miriam took this picture of me resting: 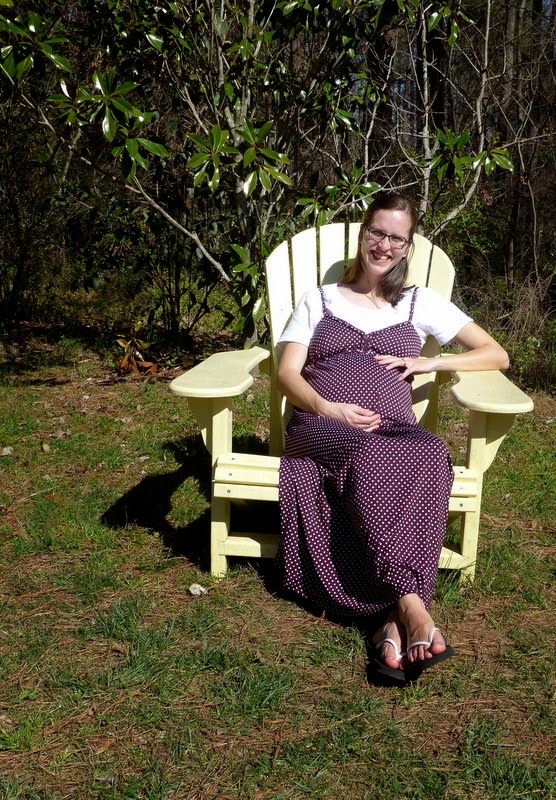 Benjamin is really bothered by this dress—he keeps asking me to take my apron off and just wear clothes. Here he is taking a turn carrying the backpack: 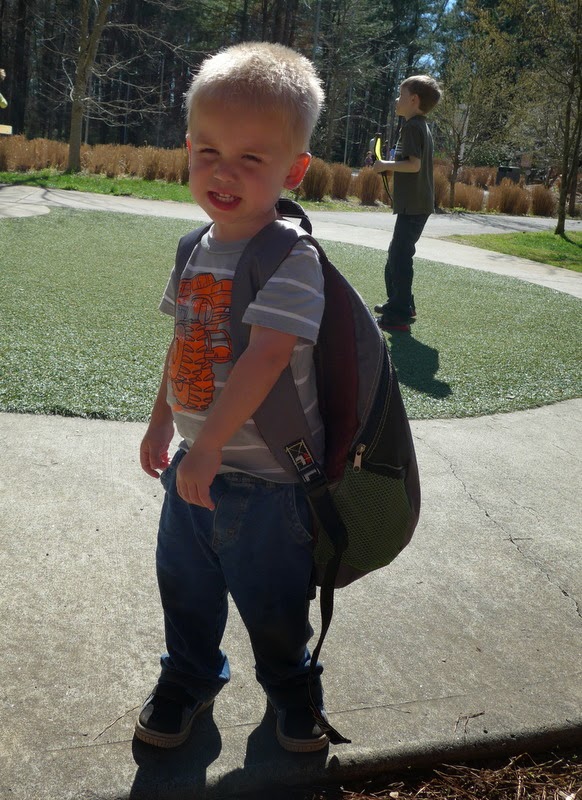 We couldn't go home without stopping by the Dinosaur Trail, of course. 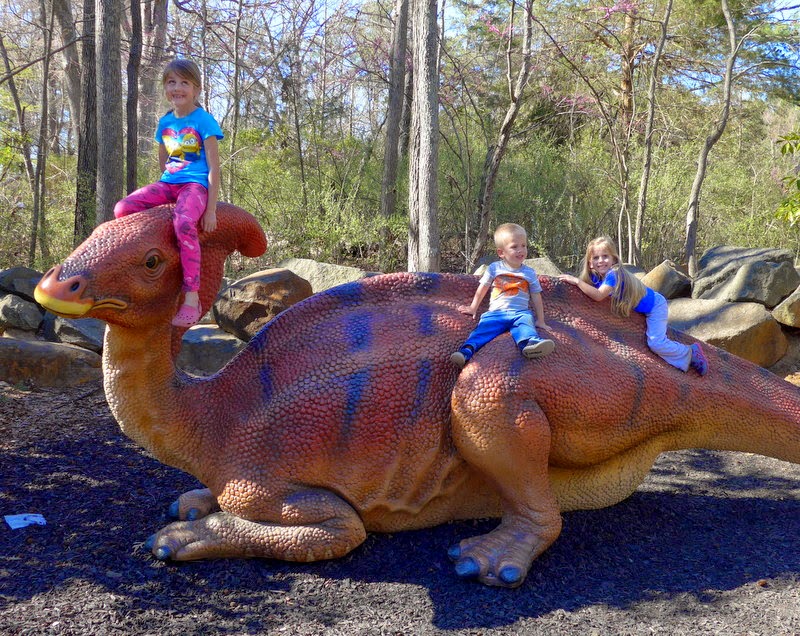 I thought the spring blossoms juxtaposed against a fierce meat-eating monster was a little humorous. Not that spring didn't exist when dinosaurs roamed the earth...it's just that I usually think of lambs and chicks when I see signs of spring. Dinosaurs don't often come to mind. 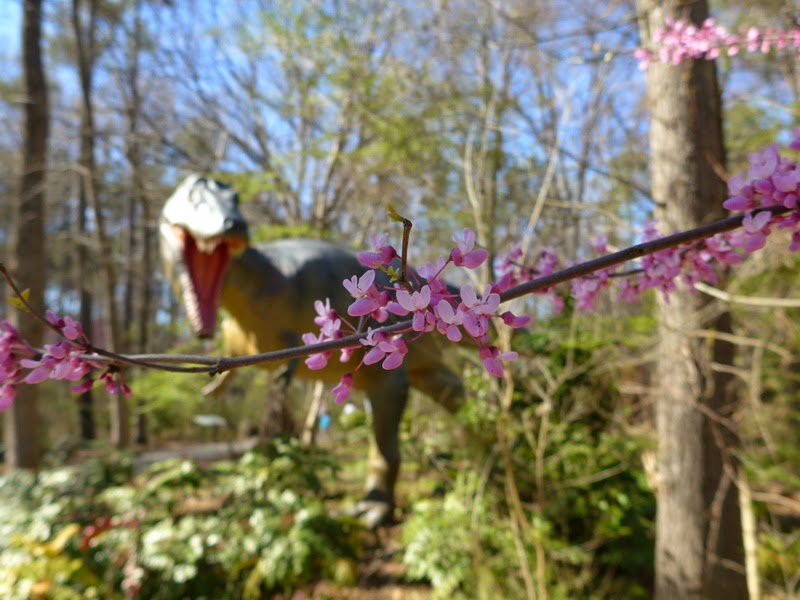 At the fossil dig, Benjamin claimed a little palm tree to be his "house. Here he is saying, "Mom! Come in here!" 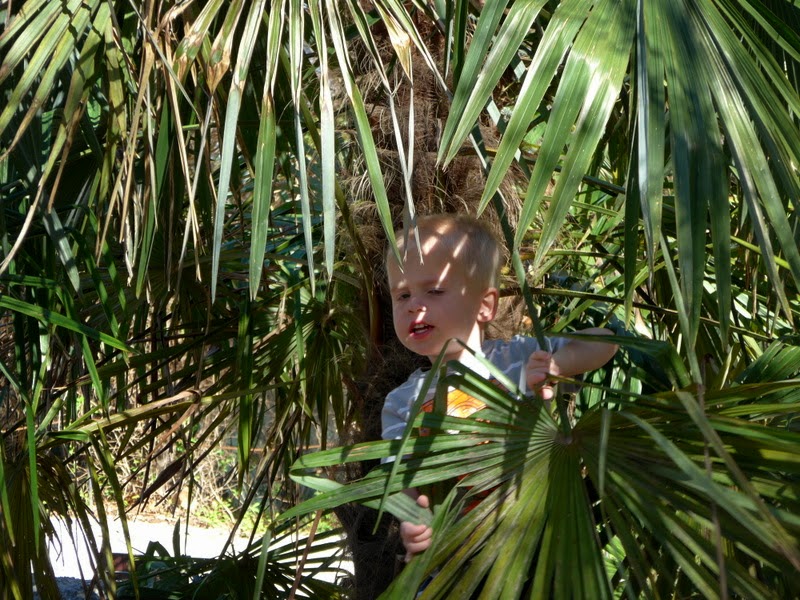 And here he is peeking through his window: 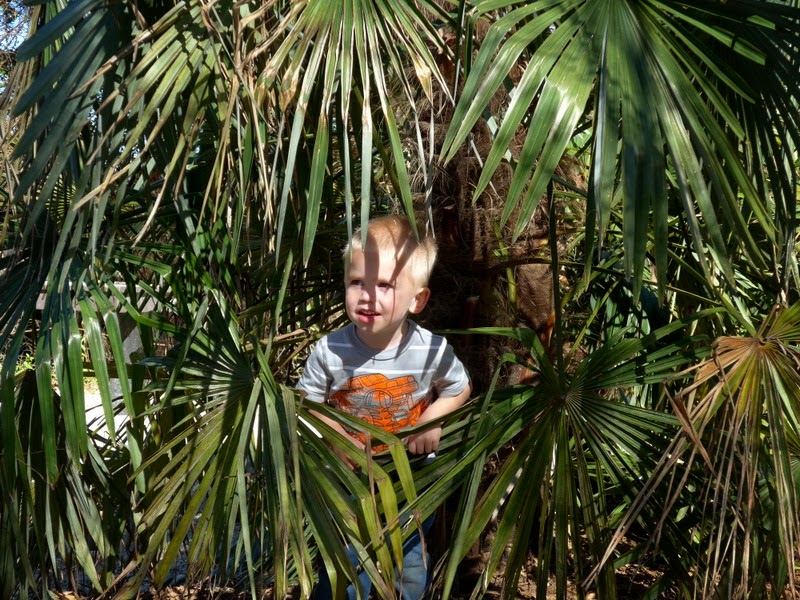 Our last stop of the day was the farm. When Rachel asked if we could go to the museum she said she wanted to see the new exhibits. I told her that the new exhibits wouldn't be open until the summer (if everything goes according to schedule). 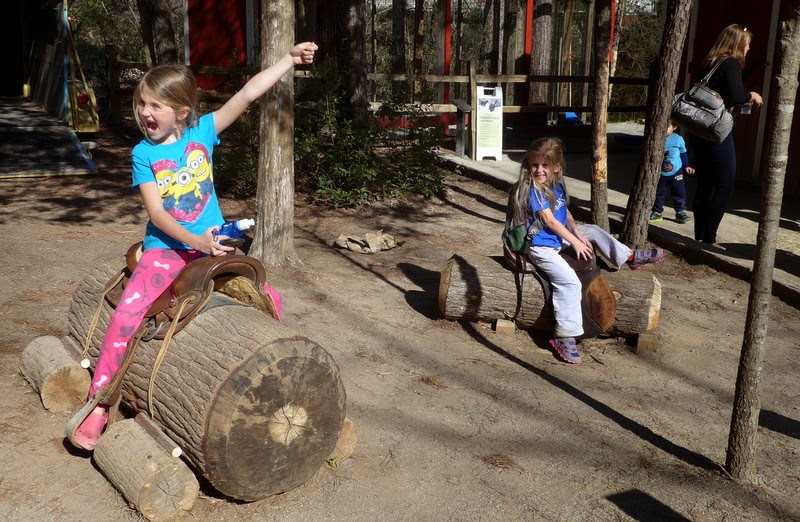 They're new(ish) at the farm and she saw pictures of her siblings on them from an earlier trip we'd taken. I hope they lived up to her expectations!

It was a pretty good afternoon out and when we got home our house was filled with the lovely aroma of a crockpot meal. Sometimes I wonder why I don't use that thing more—it's like cooking...but not cooking.
Posted by Nancy at 6:36 PM