In a crazy turn of events, I missed singing to Benjamin and Rachel this evening. They were both fast asleep by the time I went to sing (at 9:00), while Miriam—Miriam!—was still up reading.

Rachel went to the zoo today on a class field trip (which she'll write about later, in theory). She had to be at school at 7:15 AM and didn't arrive back at school until 5:15 PM. It was quite a long day for her.

We sent her with a camera (our old semi-problematic camera) and she proved her responsibility by not losing or breaking it and by taking a million selfies: 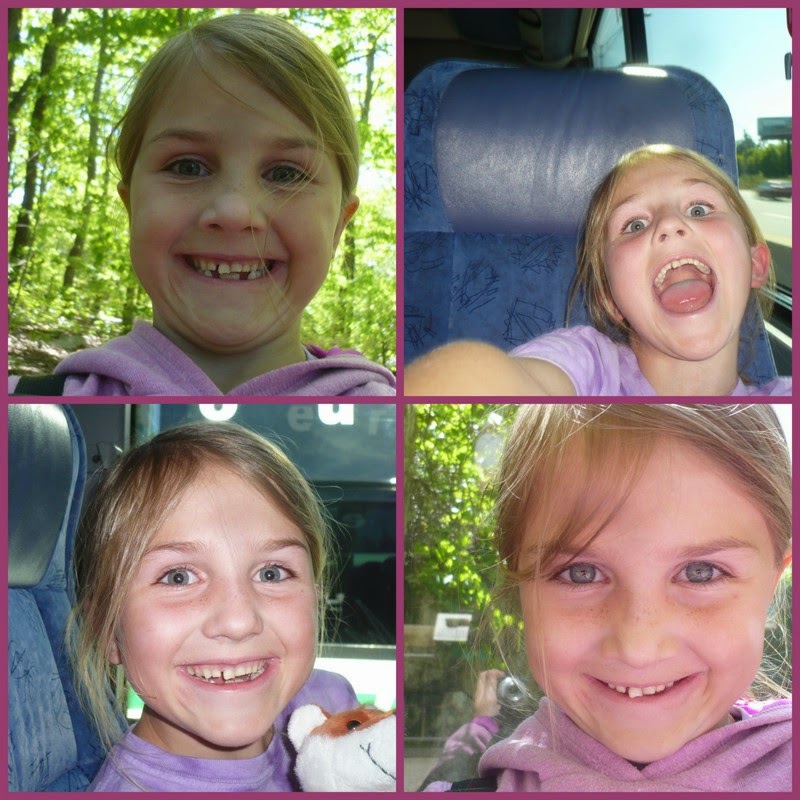 That tooth! That tooth just needs to come out of her mouth. It gets sucked in and out of her lips while she talks and is so, so ready but she won't let anyone touch it. Anyway...

We also sent her with a $5 bill, which I cautioned her to use wisely. The kids weren't allowed to bring any snacks/food into the zoo (though the zoo did provide field trippers with lunch) so I figured she'd use her money for a snack, but I was wrong. She came home with a stuffed fox.

Inside I was dying a little because, let's face it, if I had taken the kids to the zoo we wouldn't have even entered the gift shop. But I guess you have to live a little sometime...

"Oh, Jordan's mom helped me out with that."

Like that's not at all embarrassing. But Jordan's mom said she was totally fine with it when I talked to her. She was only in charge of Rachel and Jordan so she paid taxes for both of them (because neither of them thought of taxes while considering the prices of their merchandise) and even bought them a treat at one point during the day (Dippin' Dots, from the sound of things (something I've never had—but that's those little balls of ice cream, right?)).

Sometimes I think it's good other parents volunteer for these things because I'm more of a no-treats, no-toys kind of mom and it sounds like other parents were a little more "fun." Also I'm currently a waddle-like-a-penguin, can't-keep-up-with-second-graders kind of mom so I would have been a rather lame chaperone on a marathon field trip like this.

Anyway, Rachel will tell more about her zoo trip in the near future when she's not falling apart all over the place. She was exhausted by the time we had dinner—completely played out—so it makes sense that she fell asleep so quickly (except for the fact that she's, you know, Rachel).

Benjamin, on the other hand, had an almost normal day so I don't know why he fell asleep so fast.

Scratch that. I remember now.

When Rachel got up this morning she was loud enough to wake the dead. I left a note detailing things she still needed to do to be ready. For example, I'd put a water bottle in the freezer for her to put in her snack box (which she'd keep on the bus—the zoo is an hour and a half away so the kids could bring a snack for the ride in the morning and a snack for the ride in the afternoon). She opened the freezer and stuff fell out and she shoved it back in and then other stuff fell out so she shoved that back in and, I swear, it was like ten minutes of continuous crashing—and she still hadn't solved the problem by the time I got out of bed to get Benjamin, who was crying in his room because of all the scary noises.

And there she was, still in her pyjamas, with a bowl of milk and cereal sitting on the table getting soggy.

I was like, "What are you doing? You're making enough noise to wake the dead!"

"The list was for after you'd eaten breakfast and gotten dressed—they're things Dad was planning on helping you with after he got out of the shower."

"Just leave it," I said. "Finish your breakfast, get dressed, and then work on the list."

"But it won't even close," she pointed out.

"Okay," I said. "Eat your breakfast and get dressed."

There's a rule in our house that you do what you can do first before asking for help with other things (because it drives me (and Andrew) bananas when we ask the kids to, say, unload the dishwasher and instead of putting anything away they immediately find the single unfamiliar item in the whole machine and ask us what it is and what it's for and where it's supposed to go—like, seriously?! Put away the plates first because you know where those go!).

Hunting down the water bottle in the freezer fell into this category, in my opinion, since clearly she was in the middle of eating breakfast (so that should have been finished first). Also it was, like, 6:00 in the morning—gross.

I took Benjamin back to bed with me but had trouble convincing him to go back to sleep. He did fall asleep for a little while, but not for long, so he was up a couple hours earlier than he normally gets up.

I admit I'm spoiled that he usually sleeps until around 8:00, but doesn't go to sleep until 9:00 (or later (usually later) and still doesn't sleep through the night consistently so I'll take morning sleep-ins while I can, thank you very much.

That possibly explains Benjamin's early bedtime—because being asleep by 9:00 is pretty much a miracle in this house!

I can't remember the last time Miriam has been awake while the other two have been asleep. Has there ever been a time? She's always been my reliable sleeper—not that she's being unreliable today, but still! If anyone ever misses lullabies, it's her, not the other two!
Posted by Nancy at 9:44 PM