For the last few weeks there has been a mysterious event on our calendar, coinciding with the last day of classes for Andrew: "TURN."

That's all it says. I assumed, for a while, that it was some crazy acronym of Andrew's. There are several that dot our schedule: GPSC meeting, SGRW, BCFAC meeting. There are also a few of my own sprinkled around: VT Carrie, OB and 17P. I'm able to identify most of them as normal acronyms, even if I can't tell you exactly what the letters stand for. But...TURN?

As it turns out, he typed "TURN IN PROSPECTUS" into the calendar and the computer decided that "PROSPECTUS" was the place he would "TURN" in. 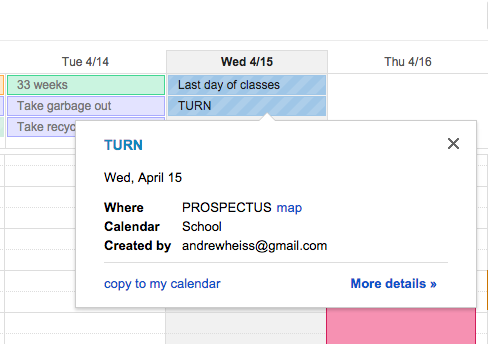 Needless to say, this week Andrew's been incredibly busy. Last night he had a GPSC meeting that lasted until 10:00 PM (and, truthfully, that's just when he left because they decided to extend the meeting...at 10:00?!). He told me it was going to be a late night—"like 1 or 2 AM late," which is sometimes ordinary but recently he's been trying to go to bed earlier to make it easier for me to go to bed earlier (since his "office" is our bedroom). 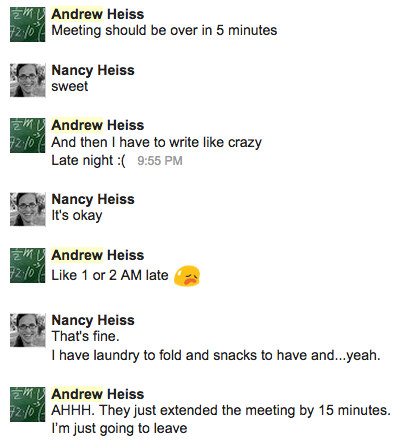 So I had my evening snack (because that's one of the most important parts of my diabetic day) and watched some episodes of Friends while I folded several loads of laundry that I let pile up during the day for this very reason (to have something to do while Andrew worked on his prospectus). I ended up crashing on the couch (but he woke me up when he went to bed so I could sleep somewhere a little more comfortable, nice guy that he is).

I've read through his prospectus twice now—once yesterday and once today. I actually left the kids to eat their mac'n'cheese and peas at the dinner table while I ate yesterday's leftovers at my computer so I could get a head start on editing Andrew's paper while he was driving home (to maximize working time for him). I don't usually do that, but deadlines are deadlines.

"So, what are you doing?" Rachel asked, when I told the kids I was going to eat at my computer so I could edit Dad's paper.

"I'm going to edit Dad's paper while I eat," I repeated (sitting at my computer is almost like sitting at the dinner table—I still participated in the conversation and settled disputes and declared when someone could get another helping).

"I wish someone would do my homework for me!"

"I'm not doing Dad's homework," I explained. "I'm editing what he's already written. I point out mistakes so he can fix them. I do that for your homework, too."

Fair for who? Reviewing her homework takes ten seconds ("Since when does apologize have two p's?") whereas editing Andrew's prospectus takes much longer than ten seconds.

Andrew's still working on his prospectus. My comments are slowly being "marked as resolved." This one was my favourite:

When he got to that comment he started laughing out loud and chatted to me from the bedroom:


“Each of these approaches are somewhat.” I can’t remember what I wanted to say!!!

Hopefully he figured out something to say there because, as it stands, that sentence is awful. Most of his paper was pretty good, but that sentence was somewhat [lacking].

Anyway, he's been so busy at school that when Miriam mentioned over dinner how much she wished it was soccer night because she felt like running and I said that tomorrow was soccer night, Rachel said, "Oh, good! That means I'll actually get to see my coach!"

That made me laugh because...Andrew is her coach.

He doesn't defend for a couple of weeks and then hopefully we'll see him more often, but then again, perhaps we won't because once he passes his defense he'll officially be "ABD" (an acronym that stands for All But Dissertation) and in Arabic abd means "one who is subordinated as a slave or a servant." That could mean we have a rough couple years ahead of us, but hopefully not.

I just got word that Andrew sent in his prospectus, so excuse me while I go and talk to my husband face to face. I haven't done that in days.
Posted by Nancy at 10:40 PM