Continuing our grand tradition—eight years running—we had our annual Easter Egg Smackdown before/in preparation of lunch today. Egg dying was a bit lame. Andrew tried a couple of tricks to make the eggs easier to peel, and they worked...they just also made it so nothing would stick to the shell. We couldn't draw on them with crayons and even the dye was still coming off on our fingers. But they were easy to peel, so...

Here are our somewhat boring eggs (we did end up saving those glitter packets for when Benjamin's not a two-year-old on the verge of becoming a three-nager): 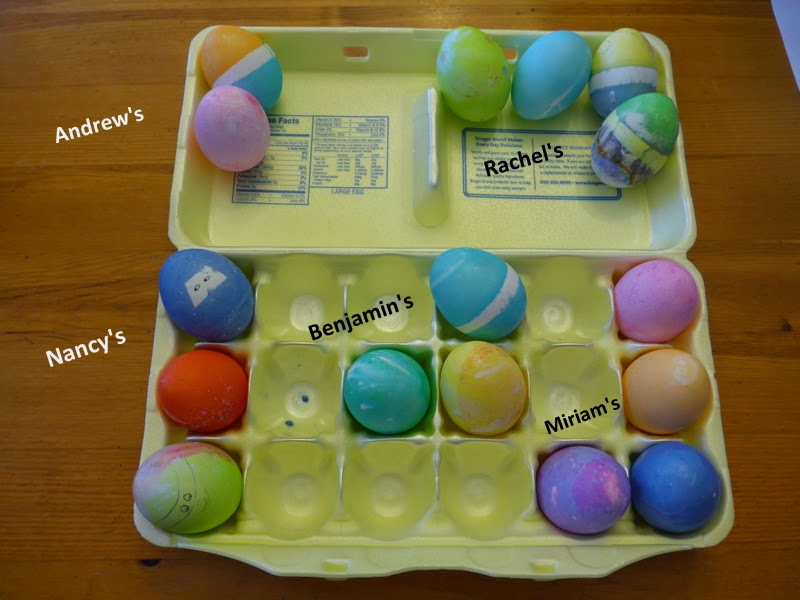 Andrew's are named Faceless Humpty Dumpty (FHD) and Pinky Jr.; Rachel's are named Smaug, Rainbow Dash, Donna, and Big Glob; Miriam's are named Pinky, Orange, Blueberry, and Plum; Benjamin's are named Puppy, Sunny, and Cat; mine are named Ninja Human, U of U, and Ninja Turtle. Andrew set up the bracket and we got right to it; even Benjamin was a full participant this year. He loved counting to three for everyone (even if he could never remember to let go of the egg on three, himself)! 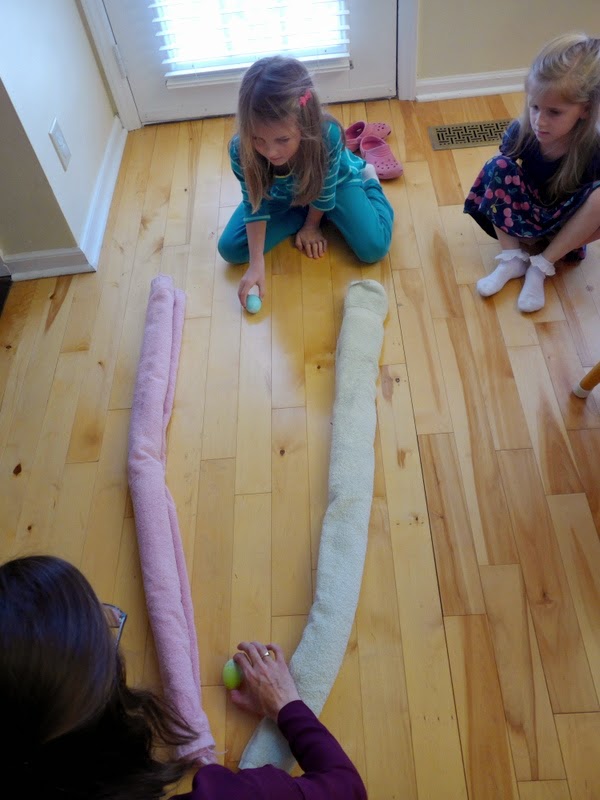 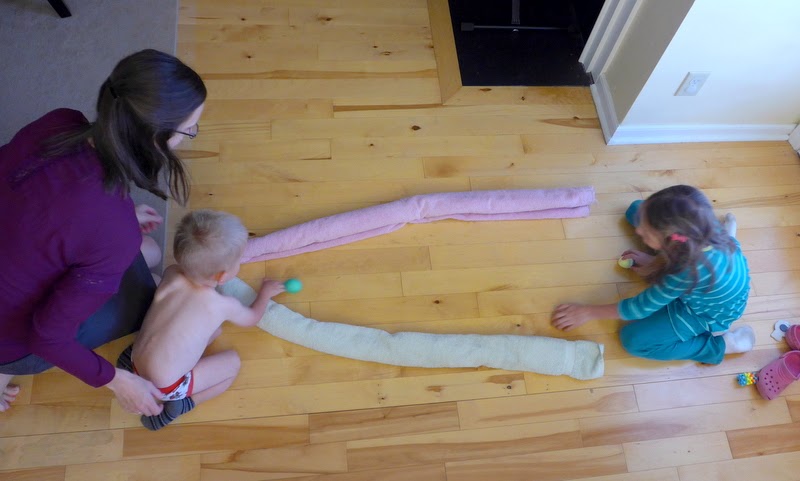 Getting up and down from the floor so many times was not the funnest thing I did all day... 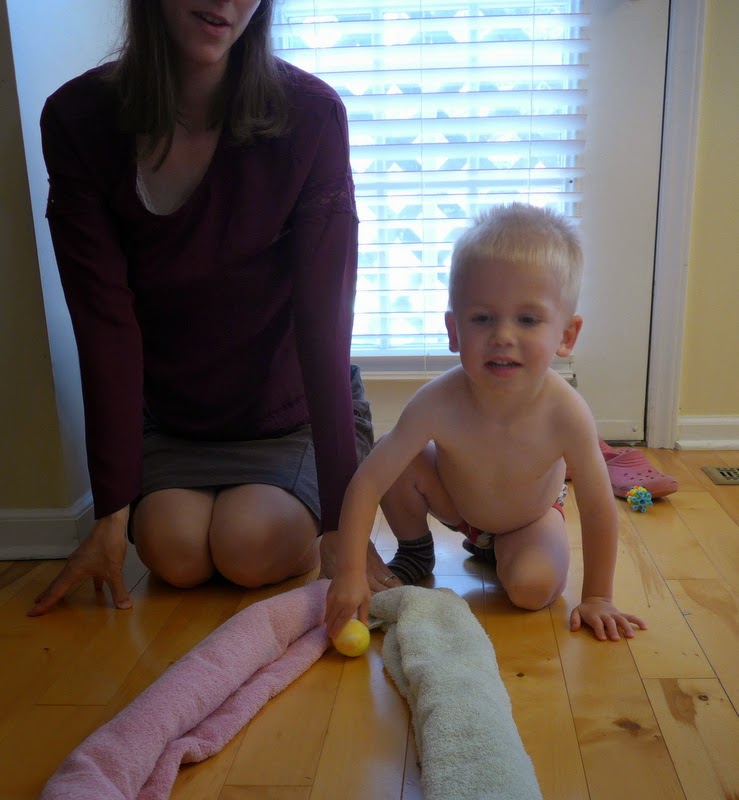 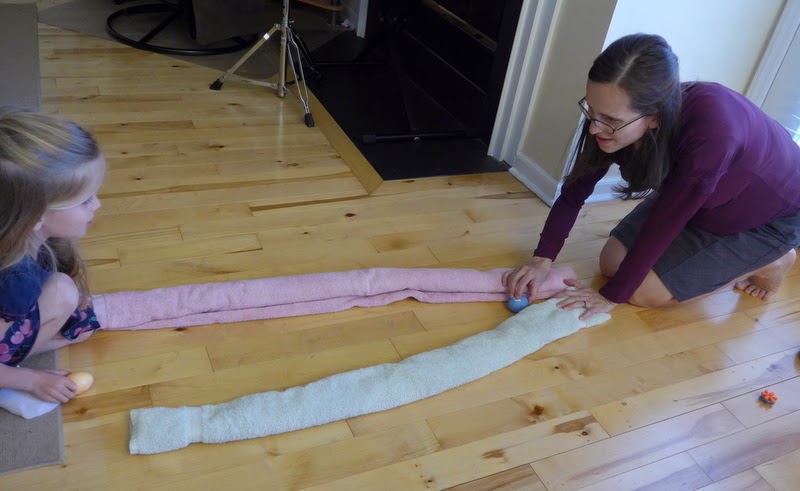 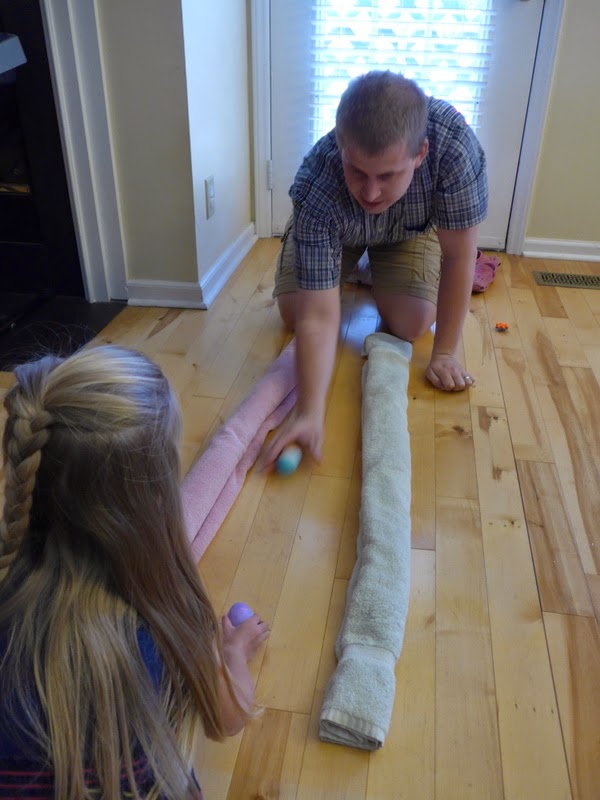 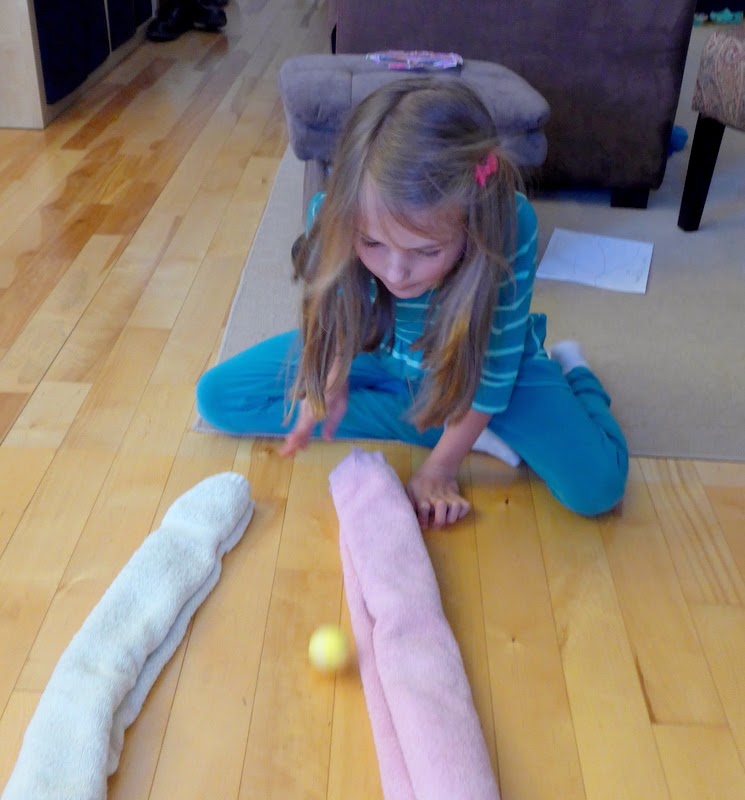 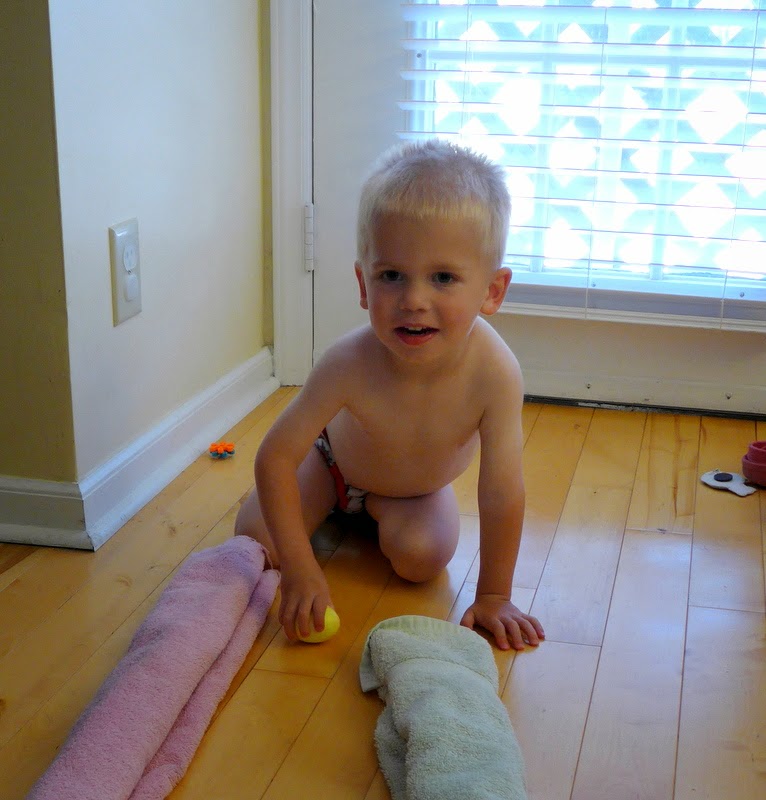 "One, two, three! Wait, what?! I totally wasn't ready!" is what Benjamin would have said had he not just started screaming wildly. 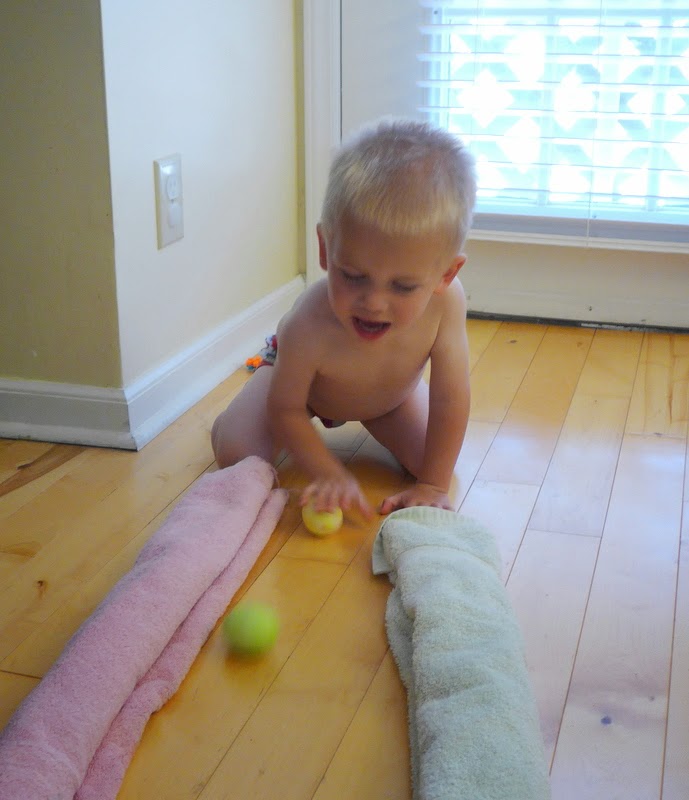 There were some pretty serious casualties this year: 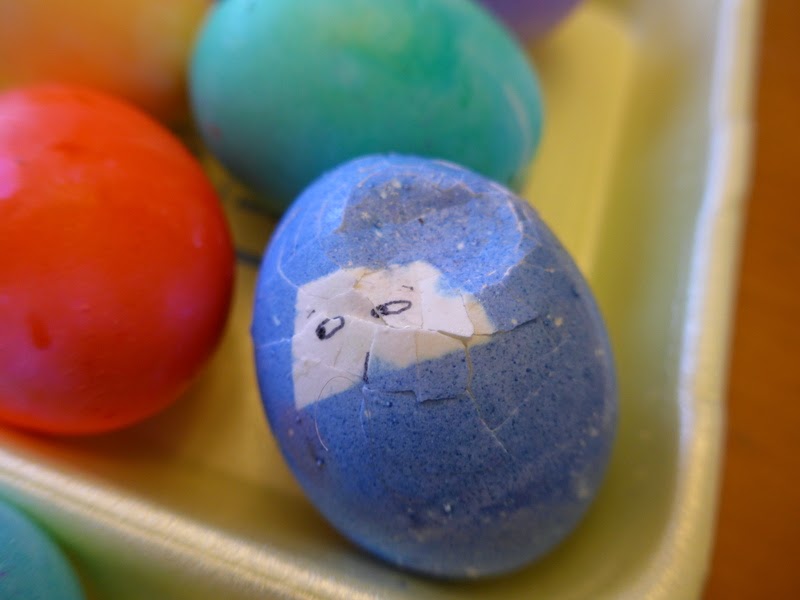 Andrew and I faced off in the championship round while the children cheered. My egg—Ninja Turtle—ended up smashing his tragically named Faceless Humpty Dumpty. 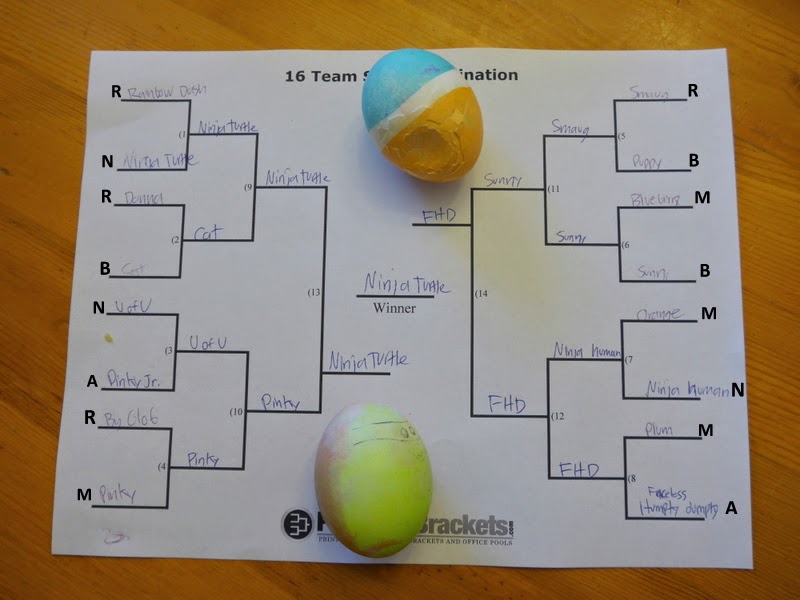 When he initially wrote it down I thought it said "Fearless Humpty Dumpty" (because Andrew's writing is just chicken scratchings) but he corrected me, "That says 'faceless,' not fearless."

Bearing the name 'fearless' might have helped Humpty Dumpty in the final round. Names are so important (like, who names a chocolate bunny Yummy—that's just asking for trouble). The name Ninja Turtle is so much more intimidating than Faceless Humpty Dumpty. I'm just saying...

There were a few complaints that I always win. Sometimes it might seem that way, but I went through the archive and found that things aren't always as they seem.

When I revealed these statistics, Rachel was like, "What?! Am I the only person who hasn't won? Benjamin doesn't count because he's just a toddler! This isn't fair!"

We told her to relax. If she never wins ever it will end up being a fantastic family story in twenty years—you know, how Rachel never wins the Easter Egg Smackdown? And if she ends up winning then she'll just win (and there won't be a fabulous story to tell). She was fairly happy with that retort, I think.

Benjamin loved the smackdown. During dinner he kept saying something like, "Asty dinny we can do Easta Egg Sma'down Hunt?"

It took us awhile to figure out what he was saying. We had to have him repeat himself a lot. He kept starting with "Asty dinny we can do..." and I kept saying, "Yes! After dinner can we...what? It's the last part we're not getting!"

He wanted to do an Easter Egg Smackdown Hunt. Because the Smackdown was fun. And hunting eggs is fun (in addition to the ward egg hunt we let the kids hide and find plastic eggs in the backyard between conference sessions yesterday). So maybe we should do a bit of both? "'At sound 'ike sun!" he said.

That does sound like fun, but unfortunately, some things only happen once a year.

That's what keeps them special.
Posted by Nancy at 11:45 PM