Grandma flew out to visit us on Wednesday night; she wanted to see the grandkids and offered to give Andrew and me a night away from them, something we've never done. The kids didn't know she was coming so we were busy getting them into bed like usual when there was a knock at the door (Grandma rented a car). We asked Miriam to stop what she was doing and to answer the door and when she did Grandma said, "Anybody need a Grandma?"

Miriam stood there with her mouth wide open for a second before jumping into Grandma's arms. Grandma had to go into the girls' room to see Rachel (whose nose was already stuck in a book); Rachel flew out of bed to see Grandma.

Benjamin took a little more coaxing to get out of his room. He actually asked for permission to get out of bed, which was kind of strange because he usually has no qualm getting out of bed for any reason ("Where's my cup? Where's my bus? I want to read another book! What's that noise?" and so on). By this time, Grandma was sitting on a chair in the living room holding Rachel and Miriam on her lap. Benjamin came to his doorway, looked out, and fell over he was so surprised.


Bedtime was obviously quite delayed since we got the kids all excited, but soon we got them into bed and then sat down to get the updates on everyone. Grandma raved about how adorable new baby Riley is, she told us how Katharine's doing in school and what Jacob's doing for work now, she told us about her plans to help Emily after her baby was born.

Grandma and Grandpa just spent a month (or longer) in Texas, Grandma flew up to Utah from there to see Sarah when Riley was born, then she flew out here to see the grandkids we took so far away from her, then she was going to go home for a bit and then head up to Idaho.

Emily's due date was May 13th, but Gavin came 11 days early so we all figured she wouldn't last right up to her due date with Maren. We were a little surprised, however, when Grandma told us on Thursday morning that Emily had called to say her contractions were seven minutes apart but that her water hadn't broken so she didn't know if she was really in labour. Karen told her to call her doctor, but Emily just kept on working. Everyone at school—even the students—were telling her to just go to the hospital already (it's a half hour drive) but she wanted to finish teaching that day and her last concert for the school year was that evening.

Eventually she decided she really was in labour and by the time she made it to the hospital she was already dilated to a seven. Maren was born shortly before noon. No time for an epidural or anything, Emily She-Ra-ed her way through it all!

Meanwhile, we were all fretting at home. Emily hadn't called to update her mom about what was going on but finally she sent a picture to Karen's phone. Unfortunately, Karen's phone doesn't get great reception out here and it wouldn't download the photo so I sent a text to Emily explaining that and asked if she'd send the picture to my phone because we were all dying to see the picture—whatever it was of.

It was a picture of a baby, which we were sort of expecting by then!

And isn't she beautiful? 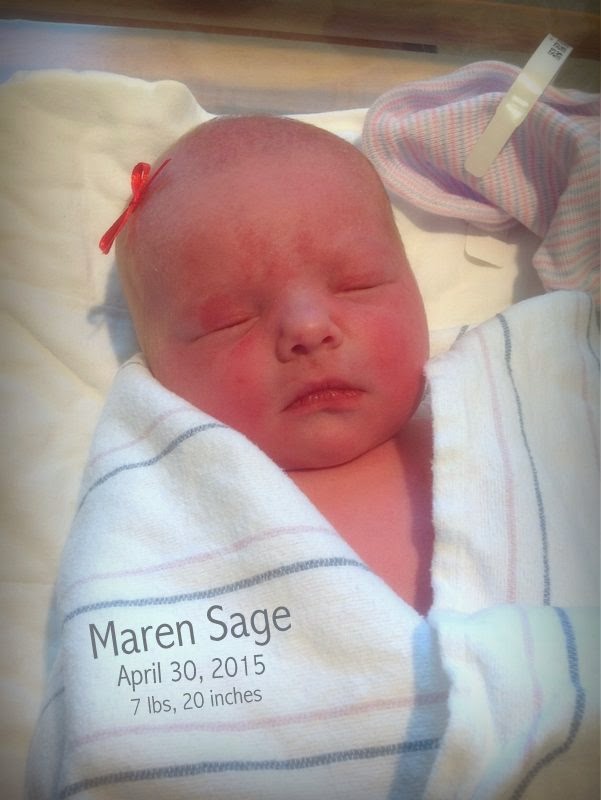 So now Grandma's stuck in North Carolina while her newest grandbaby's all the way in Idaho! Oops!

Grandpa's going to drive up on Sunday so he can help out with Gavin since Morgan will be substituting for Emily until the end of the school year. Grandma flies out on Monday and will take over for Grandpa so he can get back to work.

We're happy to have Grandma for a few days, though! And we're excited to have another girl on that side of the family! Now there are four boys and three girls...for the next couple of weeks until Zoë evens out the score.

I'm the last pregnant lady standing, which I was expecting since my due date was last. I have one more don't-have-the-baby-yet shot and then she's free to join us this month. Riley was due in April and he but born in March; Maren was due in May but she was born in April; it only goes to figure that since Zoë's due in June she'll be born in May, right?

I might be feeling a little anxious for this pregnancy to be over.

Only four more weeks (give or take)

Thirty two days (give or take).