Yesterday I helped Miriam and Benjamin make pyjama bottoms and was getting ready to make a pair for Alexander when Andrew called everyone for dinner (he made homemade spaghetti noodles with the kids). While we were eating, I offered this update on the pyjama bottom situation: "I just need to put elastic in Benjamin's waist and hem the bottoms of his pants and then his pair will be finished. And I've cut out Alexander's pants; I just need to sew them but that should work up quickly because he's so small..."

I trailed off when I noticed that Alexander had turned to stare with me, his eyes popping out of his head, his mouth wide open. He stared at me for a long time, too shocked for words. It was getting comical how long he was staring at me. Finally he broke his trance and punctuating his words with angry fork jabs, he yelled, "MOM! DON'T! CUT! MY! PANTS!"


A friend reached out to me to see if I could proofread a paper for her this weekend (which she talked to me about in October and which she just received the proofs back for (which the journal now wants by Tuesday (which are pretty regular turn-around times, but rather comical in my opinion—let us sit on your paper for six months now give it back immediately)))) and I briefly debated whether or not I had time to take the project on and finish making all those many pairs of pyjama pants and make cookies with my kids and dye Easter eggs and have the Easter Egg Smackdown and, and, and...

I ultimately decided that I could (thanks to Andrew's encouragement) and I got about halfway through it last night (and the rest of the way through it tonight).

In the meantime, here's Miriam feeding the elastic through her pyjama pants (that Lego area is a constant mine field): 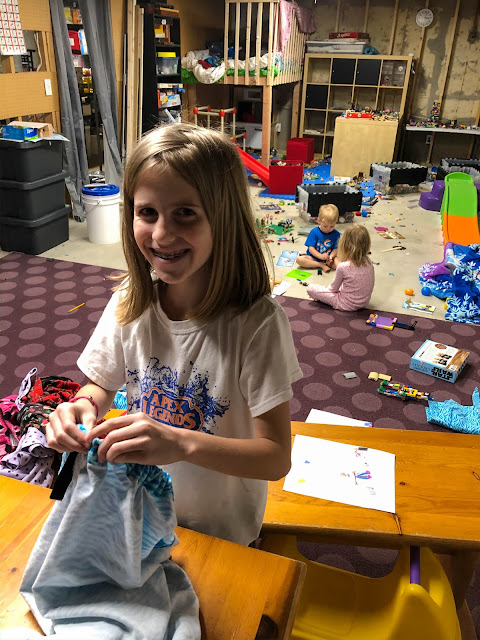 And here's Benjamin working on sewing his pants: 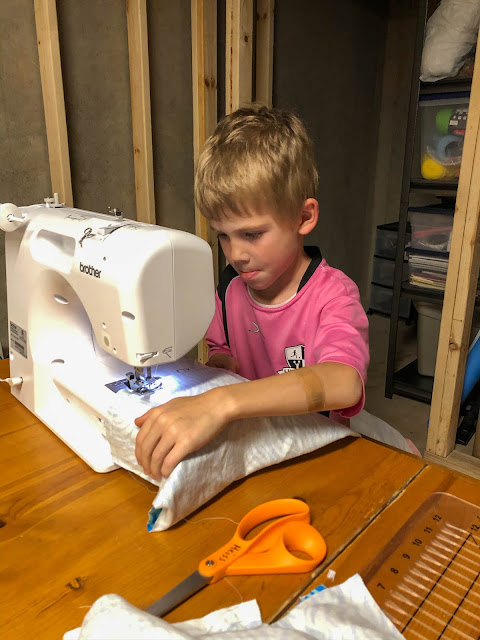 Want an absolutely terrifying experience? Try teaching seven-year-old Benjamin how to sew. Oh, boy! He could not keep an even pressure on the pedal so it was either zipping along at top speed or hardly moving, but he managed to get through a straight seam or two (I did the trickier bits).

And then when we realized that our remnants were about the same size we'd need to make some pleated face masks, I bravely decided I'd make matching face masks for the kids to go with what turned into Easter pyjama bottoms.

I'm pretty sure I've said that I would never be the kind of mom to come up with coordinated pyjamas for the family on Christmas morning. That (likely) hasn't changed. My family (usually) resists matching (except for Zoë and Miriam) and I'm usually frazzled enough around the holidays that the idea of making (or even shopping for) matching pyjamas is beyond my scope. But quarantine-me apparently feels somewhat differently about this (different enough, at least, that I will ironically make my children matching pyjamas with coordinated face masks because...why not?).

Here are the face masks. Do not look too closely. I just learned how to sew, like, last week or something (above when I said the "trickier bits" all I meant was I did them; I did not say I did them well). They're crooked and sloppy, but they were a labour of love. 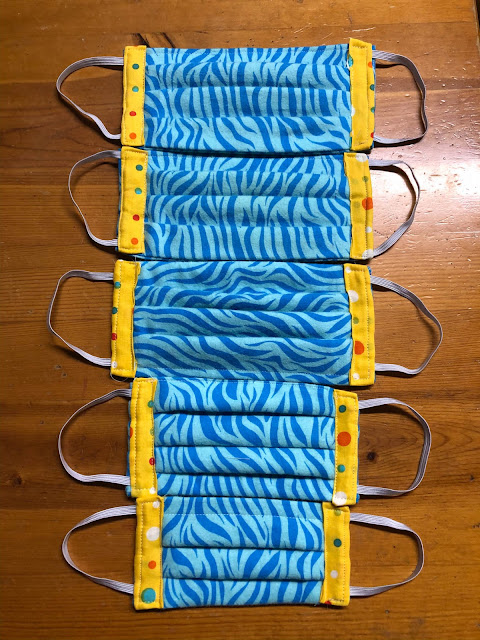 Oh, and I had to do math, which Zoë found puzzling. The original pattern, you see, was adult-sized, which works great for the adults and the nearly-grown children in our house. It works less well for the, say, two-year-old. Duh. So the pattern had to be scaled down.

"I need a pencil and a paper so I can do a little math," I announced.

"I know it's not a school day," I said. "But that's the thing about math—you use it in everyday life, not only on school days."

"You use math every day?!" she asked in awe.

"Somehow or other I just keep needing it," I said and then I showed her how the original pattern was 8" x 14" but we wanted to make it a little smaller. Alexander's mask was 6" x 10.5 and Zoë's was 7" x 12.25. But they ended up being about the same size because what is seam allowance?

Here I am rocking one of the masks, myself: 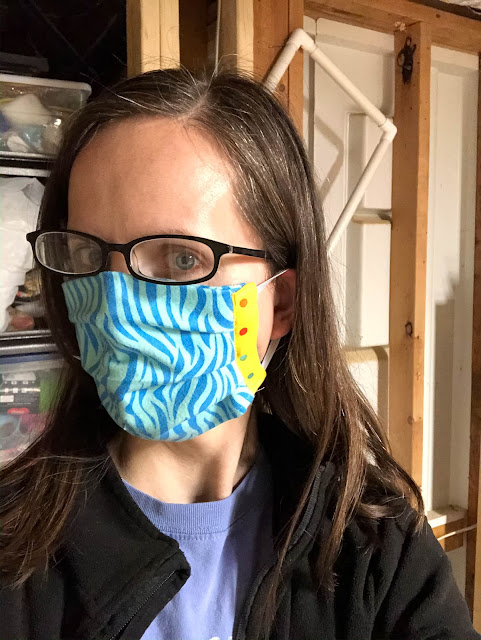