We went for what shall here on after be known as a "Hobbit Walk" this evening.

It was a little chilly and windy and no one felt like doing "The Loop" so instead we went to the stop sign (or "there") and "back again"—thus, the name "Hobbit Walk" (for "there and back again")—which is only half as far as "The Loop."

Alexander wanted to walk on the way home; he often wants to walk these days. He wants to pick flowers, and chase butterflies, and hide in the bushes to pop out and scare mom and dad, and stare at the anthills, and so forth. He doesn't want to be strapped into his stroller (though we've been mighty particular about making sure he is strapped in this past month (and his teeth are once again quite tightly fastened in his gums, for the record)). He also loves to make people swing him.

He especially loves when he can convinced Daddy to swing him because Daddy goes a bit wild and takes him all the way around.


Side story: Last night when we were taking "The Loop" a neighbour called out to ask if we wanted any shelves. We said we didn't and then I thought, "Those shelves would fit just so in the toy room and we do have a number of homeless things in that room..." so I told Andrew that and he said, "Fine. We'll send the kids to carry them home while we finish up the loop. It will be like a date."

"Rachel can carry one and Miriam and Benjamin can handle the other."

"They're very capable children but there is no way they can do this. We're so far from home. You have no idea if the shelves are light or not (they're probably not). They can't do it alone. We have to help them maybe finish "The Loop" and bring the car around..."

So he carried a shelf home and Rachel and I balanced another shelf on the stroller and wheeled it home (while Miriam wrangled Alexander, Zoë, and Benjamin) and it just about killed us.

"Whose...idea...was...this?" Andrew puffed as we were approaching our house (only 0.3 miles away, but uphill, carrying a shelving unit...it was tough).

But, we got the shelves home and one of them fits perfectly where I imagined it might and the other one...is sitting in the middle of the floor and will find its home later.

Now back to today's walk! We had sent the kids ahead with the stroller and then had stopped Rachel (to film the all-the-way-around flip) and Zoë had ended up taking the stroller home. She always wants to push it even though she can barely see over the top of it (in fact, I'm not convinced she can see over the top when she pushes it yet and by the time she gets there there probably won't be anyone to push). When the rest of us made it to the foot of the driveway we stared down in horror at what appeared to be the scene of a crime. 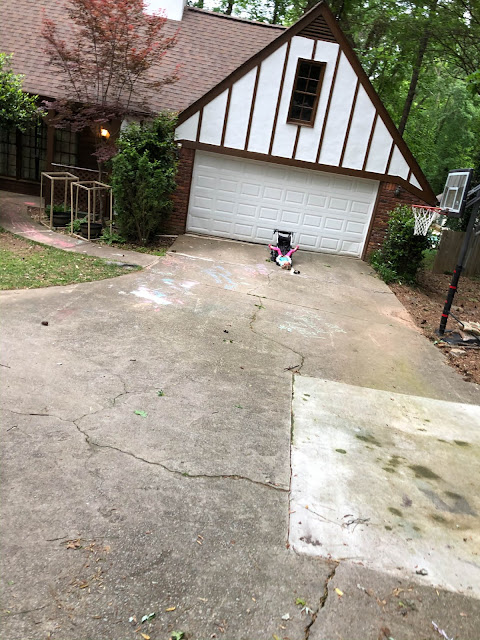 Zoë was at the bottom of the driveway, lying all skewampus in the toppled stroller (the fact that the cupholder had popped off the stroller was another alarming detail).

We all started yelling over top of each other ("Zoë! What happened?! Are you alright?! We never should have left her with the stroller?!"); I don't remember who said what. Benjamin was racing down the driveway as fast as his little legs could take him.

She just turned to look at us and simply said, "What?"

So apparently April Fool's Day lasts all month in this house!! She hadn't had an accident at all. She had wheeled the stroller down the driveway like a normal person, tipped it over, and then climbed into it all mangled like that just to give us a scare! (The picture was a re-do; she was originally in a much more alarming position).

Who even thinks of these things at fours years old?