I knew we'd have to sing In Remembrance Of Thy Sufferings for the sacrament hymn today because it popped into my head while I was preparing our little primary lesson and I'd been humming it all morning. And the best way to get a song out of your head is to just sing it through all the way, right?

But Miriam chose the opening hymn—There is Sunshine in My Soul Today—which she hadn't practiced beforehand so we took it a little...slower...than it's meant to be sung. Alexander didn't mind, though. He was pretty sure he knew all the words and sang along with us (except he was singing You Are My Sunshine):

And, no, he doesn't have any clothes on (except for his unders).


Church is rather...come as you are...at our house. Alexander was naked, Zoë (upon hearing it was "church day") put on a Sunday dress, the older kids wore their pyjamas, and Andrew and I wore lounging clothes. Perhaps I should/could be more strict about the dress code, but I figure if we're there (and, more importantly, are happy to be there) whether naked, in pyjamas, or wearing our best clothes, we're doing something right.

Anyway, it was a sweet to sing to have Alexander sing along with us this morning, even if he only got a few words right (in his defense "sunshine" and "happy" and "love" show up in both songs, sometimes several times).

He sang that song all. day. long.

I tried to get a video of him doing it later but he would only sing it in "robot voice," which...is fine...except that he already sounds a little bit like he's talking gibberish so when he adds a silly voice to words he's already slaughtering the pronunciation of it's basically unintelligible. The robot voice is cute, though. Just...difficult to understand. Which, as I've mentioned, Alexander can be under the best of times.

Yesterday he mostly ate vegetables. We had leftover night and I gave him a plate with pizza, cauliflower, broccoli, and carrots. He left the pizza untouched and polished off the vegetables and then asked for more. So I gave him the rest of the leftover mixed vegetables, which he ate (again leaving his pizza on his plate).

"More veggies!" he sang out.

"Those are all gone," I informed him.

His mouth dropped open and he let out a little squeak before quickly clamping his hand over his mouth to stifle his cries of anguish (he's become very dramatic recently).

"...but we have green beans!" I added, hoping to divert a tantrum.

He never did eat his pizza (though he did eat pizza the day before that).

So you see, it's fine that he just ate sour cream for dinner. When the sour cream was gone (I mean, it wasn't supposed to be the main course; it was meant to be a garnish)...

...he scraped out the container, licking off every last bit he could find. 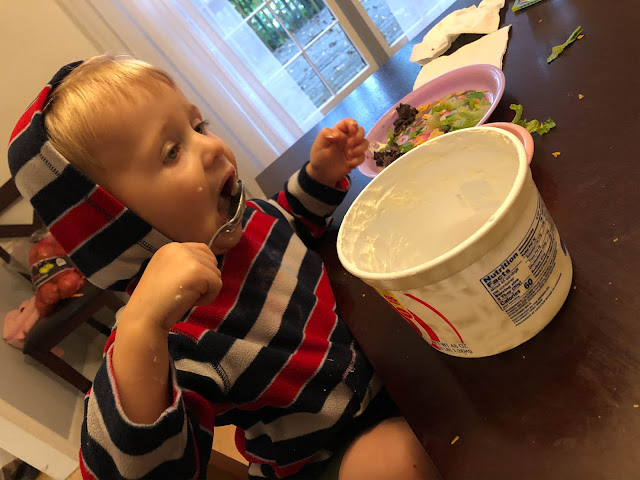 While he was eating he's pause every once in a while to say, "Brrr...bi' bour team ib told!"

Then he started doing this weird shivery thing so I started filming him.

Then he shook his little body. I got shiver pretty quick, but I couldn't figure out what he was shivering like. A knight? A nate? A...what?

Thanks. That's helpful. Then he showed me the little "snake" he made out of sour cream.

He was shivering like a snake! Because snakes shiver all over the place...or, you know, slither.

* That's a thing kids says these days, that they're "here" for "the content." Pretty sure I get to keep my "cool mom" status now, right?
Posted by Nancy at 1:18 AM