A while ago we began seeing this pretty purple flower popping up in various lawns, so it very obviously is considered a weed...but it's pretty...so the kids wanted to know what it is and whether or not it was edible because they're weird like that.

Andrew says their foraging habits are my fault because it all started when I planted nasturtium in the vegetable garden and told the kids they could eat it.

"Ummm...I'm sorry?" I asked, taking mock-offense. "The children are foragers because I let them eat produce we grew in our garden?"

"Nasturtium isn't produce. It's a flower. Eating flowers is weird."

So I had some spiderwort with my salad at lunch just to "spider face." 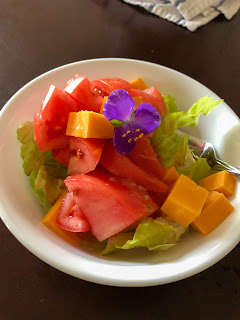 Nasturtium is as normal to eat as any other herbaceous plant. Parsley, anyone? But whatever. Andrew may have a PhD in public policy but he has very little experience with vegetation (he tends to avoid green stuff (to his credit, a large percentage of green stuff is poisonous and about 20 species supplies about 90% of our plant diet (which seems insanely low, but it is what it is, I guess)). 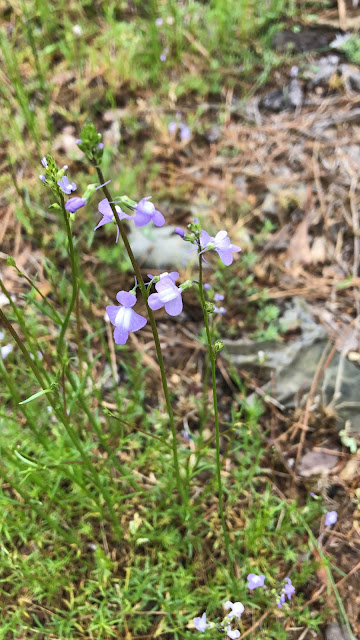 Anyway, the kids wanted to know what this cute purple flower was so we identified it using my handy little phone app (Seek).

"It's called Blue Toadflax," I told the kids.

Miriam misheard me and repeated the name as "Blue Toadfax."

"Flax," I corrected her, emphasizing the /l/.

But with her fax mispronunciation we began to play around with the name and finally settled on Purple Frog Email. The older kids seem to know that we are just joking around with that name (though they also have to ask me to remind them of the real name) but the younger kids are 100% convinced that this flower is called "Purple Frog Email."

It is, for your information, not exactly "marketed" as edible but it's also not poisonous, so....I mean....whatever. I told my kids not to eat it.

Here's Zoë with some freshly picked Purple Frog Email (wearing, for the record, a "bug bracelet" on each arm and the pull top from a carton of almond milk on her finger because she is fancy (and bug proof)): 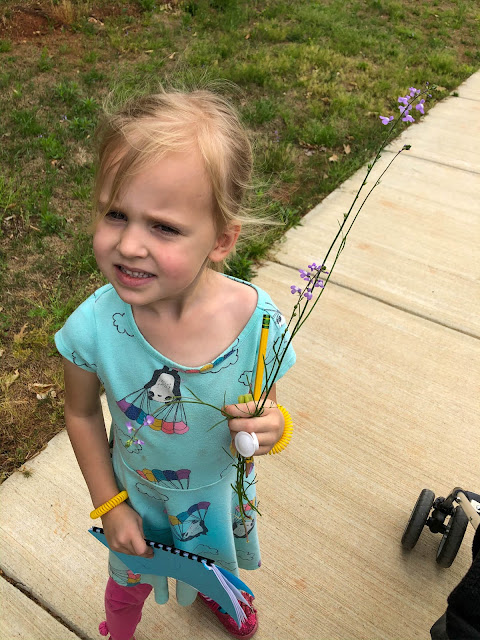 We took a little identification walk with our field notebooks this afternoon. The kids were super into recording everything they saw at the beginning of the walk and we could hardly take a step without someone begging to identify and write about something.

Here's Alexander excitedly taking copious notes on something or other during one of our (many) stops: 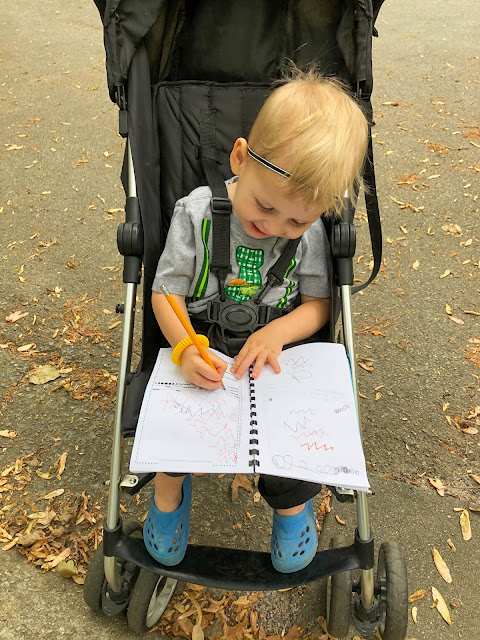 Soon their attention on that part of the activity waned (as I knew it would) and we did more walking than note-taking, which is fine. 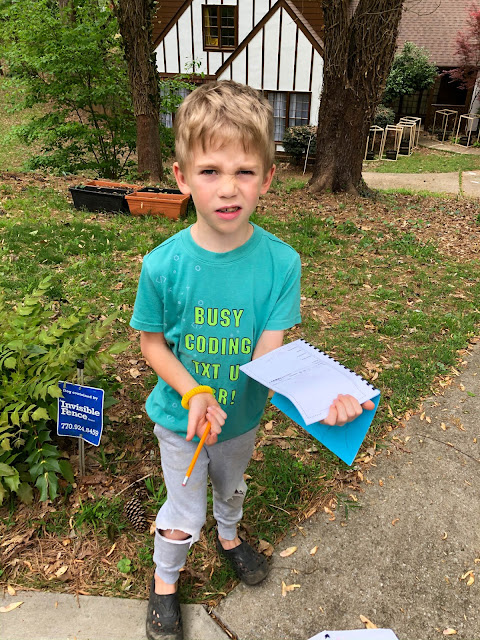 This is a very interesting daffodil, I think. It's called the Hoop-petticoat Daffodil: 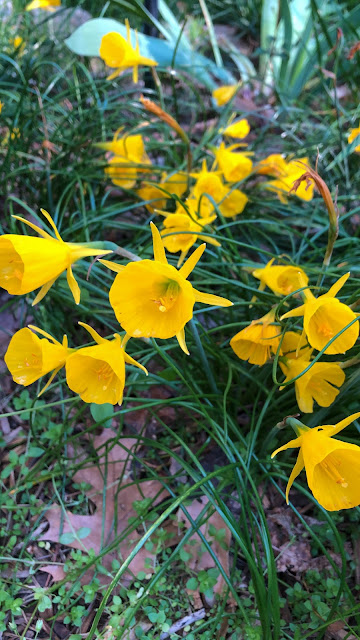 Most of the daffodils are dead now and irises are starting to pop up all over the neighbourhood now. But these ones were a little later. They are poisonous (as are all daffodils (don't eat daffodils)).

We're also starting to get bombarded with these tulip-like flowers from the tulip poplars (which are, like Purple Frog Email, not touted as edible): 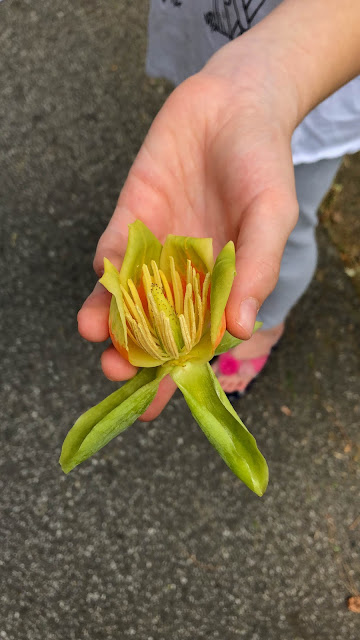 Tulip poplars tend to be rather tall (at least in established neighbourhoods like ours) and the flowers grow at the tops of the trees, so you can't see them while they're on the trees, but then they fall to the ground and we get to see them then.

The kids were rather excited when we came across some woodsorrel, which is edible (in reasonable doses (it can prevent the absorption of calcium in large doses (but like really large doses))) and has a lovely citrus flavour. Here's Slender Yellow Woodsorrel: 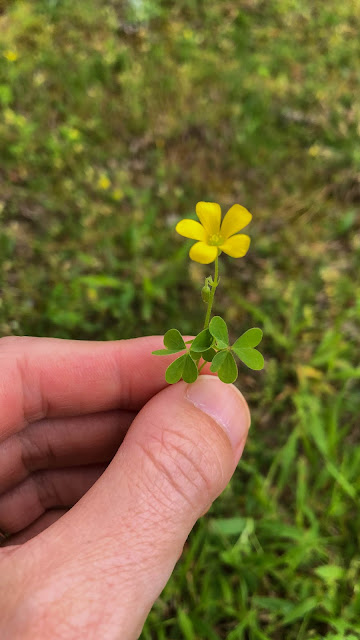 And here's Creeping Woodsorrel (which is sometimes known as Sleeping Beauty (the kids liked that)): 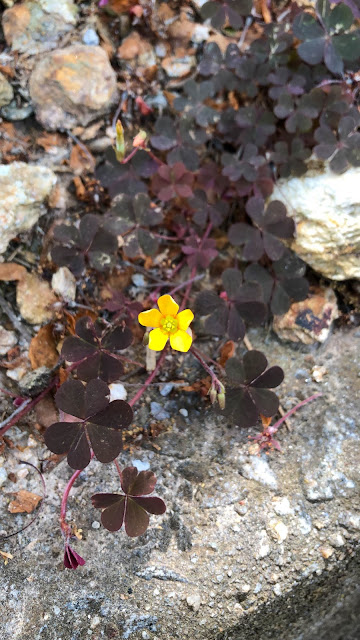 The kids liked the woodsorrel so much that excitedly led Rachel to find some when we went on a family walk this evening. Nice and tart—good palate cleanser!

We also found some Pink-Sorrel, some Creeping Cinquefoil, Field Marigold, and Butterweed.

"Mmmm...butterweed!" Benjamin cheered. "That has to be edible! Let me test it!"

"We don't test for edibility," I told him. "We research for that. Other people have already tested it and we're going to trust them."

"How do they test?" he wanted to know.

"By eating it and suffering the consequences," Miriam said.

"Exactly. Years of experience, likely some casualties. Nowadays they can test for chemical compounds. We're not going to test, though. We're just going to look it up."

I whipped out my phone and looked it up. Butterweed is incredibly inedible (it will damage your liver), so Benjamin contented himself with sitting down for a good long sniff of the stuff instead. 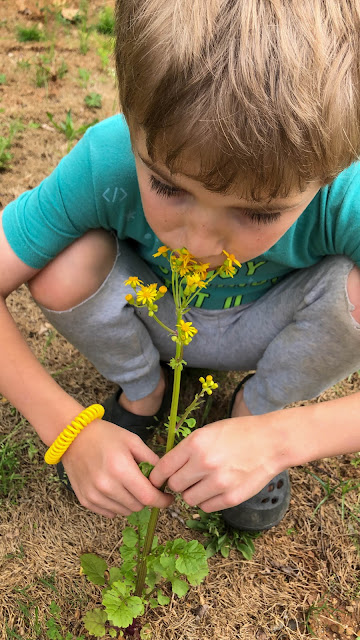 "How did people look stuff up before the internet?" Miriam then wanted to know. "I mean, how would you find out information about butterweed? It's not in any of our books. Our books just talk about plants generally."

"Well," I explained, "You see those books you're taking your notes in? There are actual published field guides with notes just like yours. They have pictures and information of plants you might find in any given area, so you'd have to find the plant in the field guide and read about it."

"That sounds tricky," she said.

"Researching used to be a lot more work than it is these days," I agreed. "But I do have a field guide coming for our area and then we can take it out to read more about plants, with the help of the internet in identifying things. Books are still important, but the internet is an invaluable resource as well."

Here are my sweet girls with azalea flowers tucked behind their ears: 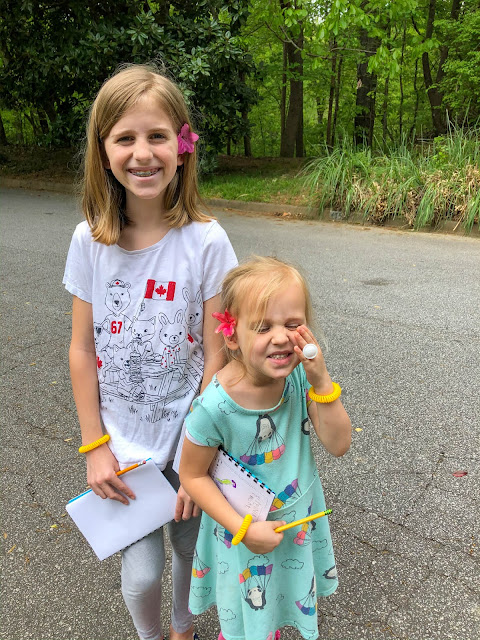 It was a good, informative walk. Tomorrow we'll finish making our field notes and colour our illustrations for the plants we found today and then perhaps we'll head out again. You never know what you'll find. Miriam was aghast to learn that woodsorrels close up in the evenings. She had been hoping to show Rachel the pink-sorrel but couldn't find any anywhere. Further investigation revealed that it was there just tucked in for the evening.

"And that's why your field book asked for the time of your observation," I explained. "You'll see different plants behaving different ways at different times of day, just like animals."

She had been frustrated having to always ask me the time while taking her observations, but it was worth it in the end, she learned.

Here are the kids posing for a picture across the street from the rest of us (where they had been retracing our afternoon steps in order to find the woodsorrel). We were practicing our social distancing really well: 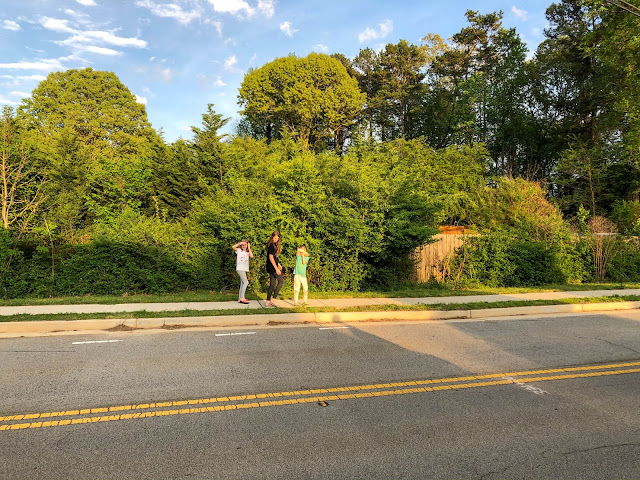 And here they are (mostly) posing normally with the sun now out of their eyes: 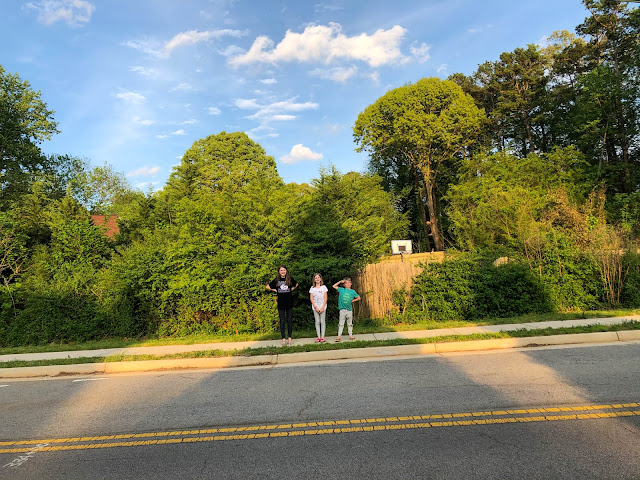 There are a couple of big cedar-ish trees along our walking route. The kids like to pretend to be "eaten" by them, sinking back into the branches, not unlike this Homer Simpson GIF:

The other day the kids got really far ahead of us and Zoë hid inside that tree until we were just walking by and then she flew at us screaming all sorts of gobbledygook. I saw her leap out of the tree and jumped, but recovered quickly. Andrew, however, just about died on the spot. He almost fell over with fright and took several minutes to recover (from both the shock and the laughter). 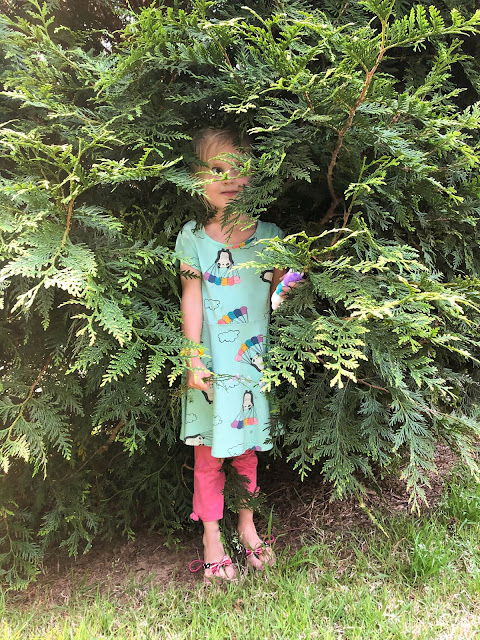 He said he just couldn't wrap his brain around what was happening. Here was something—Zoë!—flying out of the bush. Or was it not Zoë? Was it something dangerous? A car? Why was Zoë screaming? What's going on?!

She got him good! It was hilarious and he was so jumpy for the rest of the evening!

I have to admit, though, that Alexander gave me a scare the very same evening. He had already been up once after being put to bed, but I put him back into his own bed (a grave disappointment) and went back downstairs to do some things.

I came back upstairs a while later, flicked on the bedroom light and saw something moving out of the corner of my eye, which made me panic. But it was only Alexander writhing around because of the light. I had not known he had been in my bed! He must have gotten out of his bed and climbed into my bed (alone, in the dark) and fallen back asleep.
Posted by Nancy at 11:26 PM