I mixed up some cookie dough on Friday so we could let it sit in the fridge overnight so we could roll  and cut out cookies on Saturday (Andrew took over that part) and decorate them on Sunday. A three day project and—if we stretch things just a little bit—allegorical of this special weekend.

Things got really beaten up on Friday, sat in the dark Friday night through Sunday morning, and we ended up with beautiful cookies. It's an Easter miracle! 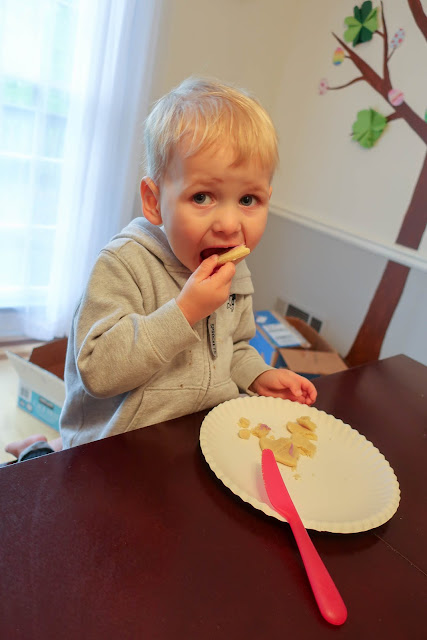 Thanks, baby! He often wants to share with me, which is just so generous (and gross). He'll say, "Do you want to share with me?" which makes me think he's asking me for something, but instead he'll offer me part of whatever he has (not that he never takes from me; he does plenty of that as well).

He's also getting to be a pretty big talker. Tonight at dinner while we were going around saying our favourite part of the day, Alexander said, "My favourite part of the day was playing outside with you!" Eleven words! That's pretty awesome for a 30 month old (that's how old he is; I learned that when I was filling out that survey—titled 30-Month Wellness Visit—for the doctor (he's 2.5 years old in normal-people speak)). 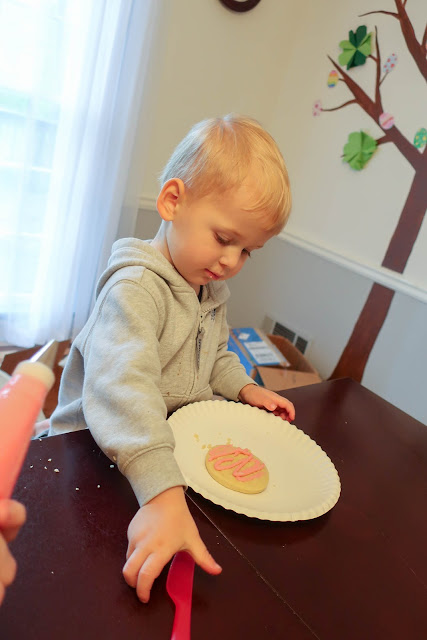 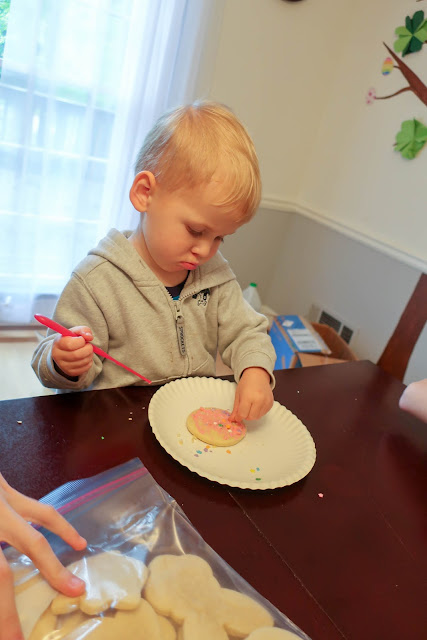 Here's Alexander with the little sandwich cookie he made (two cookies he smashed together, including the one he'd given to me). I snapped this picture while he was telling Naanii all about his cookie decorating escapades: 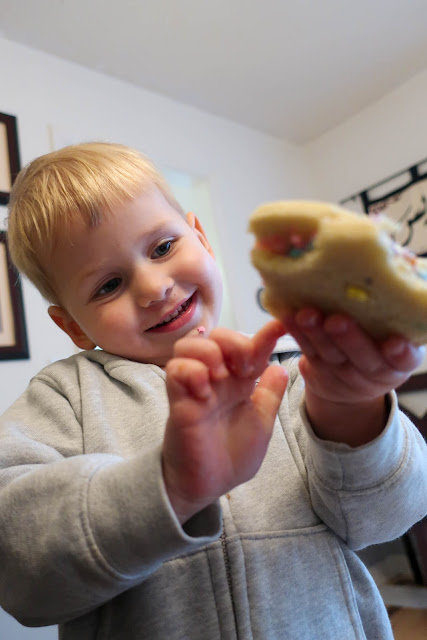 Zoë was having a hard time finishing her lunch but she diligently picked away at it while everyone else worked on their cookies. Nibble, nibble little mouse... 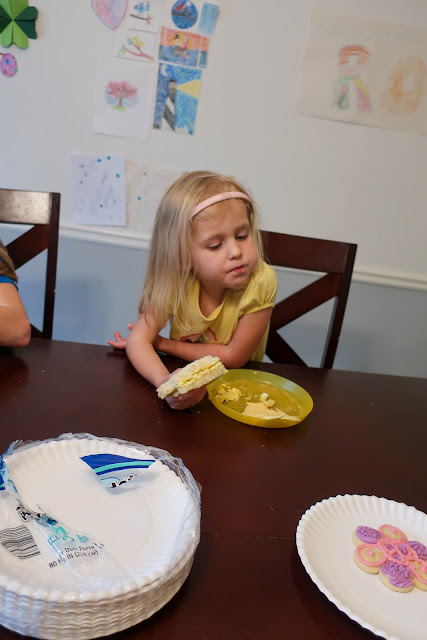 I eventually let her put her lunch away so she could decorate cookies with us because that child is so stubborn she would rather forego some positive incentive than complete the task she doesn't want to do. I can't even count the number of times she's simply shrugged and told me, "Fine. I don't want a cookie," or "Fine. I'll just put on my pyjamas and get into bed," or "Fine. I didn't want to go to the park, anyway."

And I don't want to make her miss out on everything because of her own stubbornness (and she did try to eat her sandwich for a long time (and I'm a bit of a pushover (plus she's really cute))). 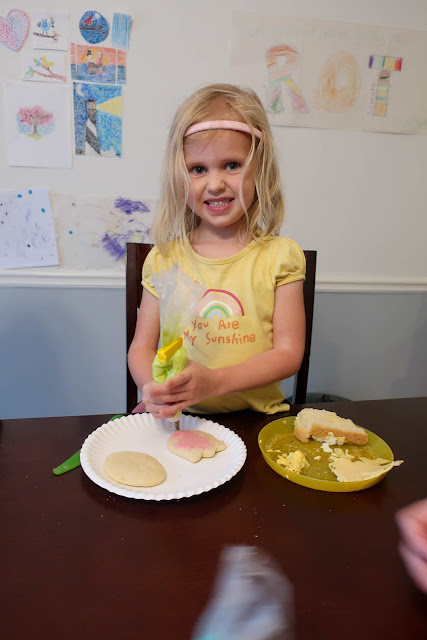 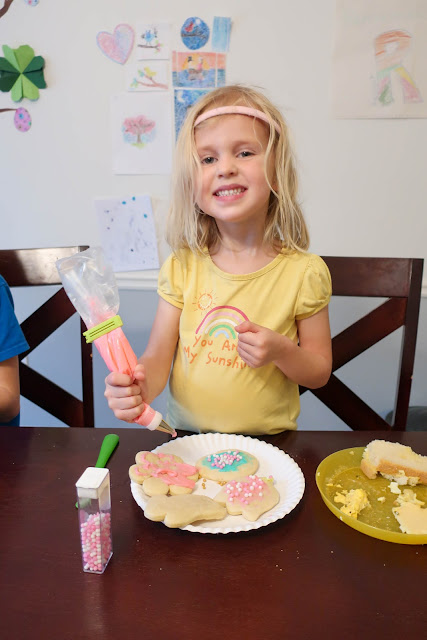 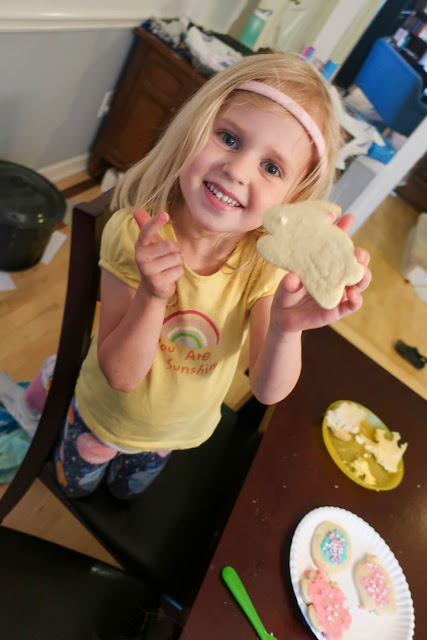 Here are her finished (and very generously sprinkled) cookies (she ate the bunny): 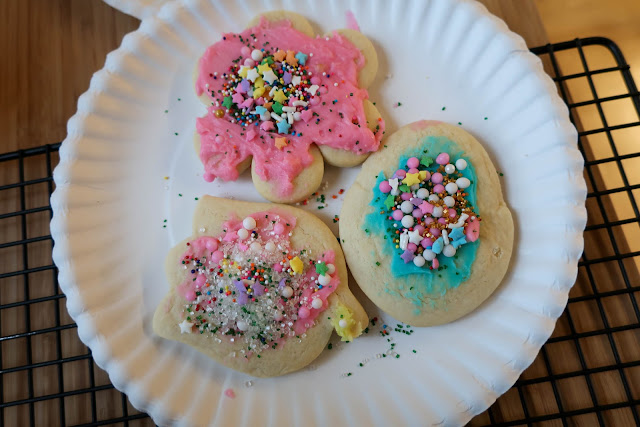 Here she is, surrounded by little jars of sprinkles: 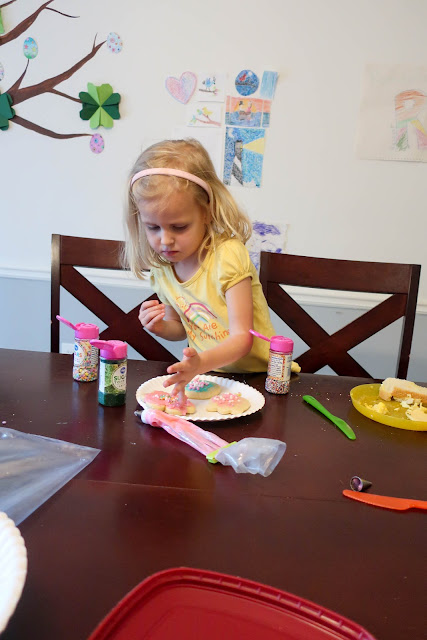 We had to call Benjamin up from the Lego room to decorate his cookies. He put a little effort into his first one and then just globbed icing on the next few before declaring he was done. 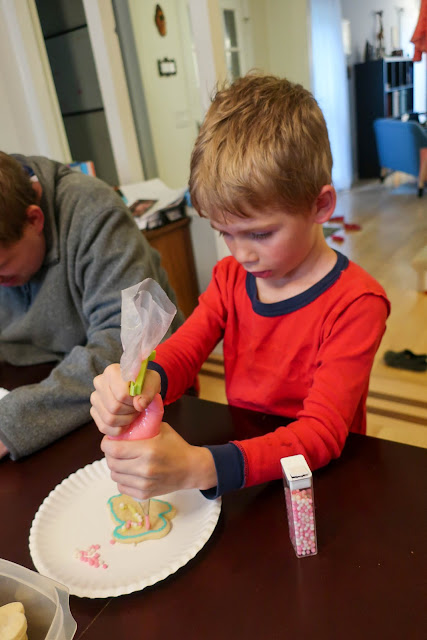 "Don't care. Play Lego," he caveman-grunted back at them before dashing back downstairs to his lair. 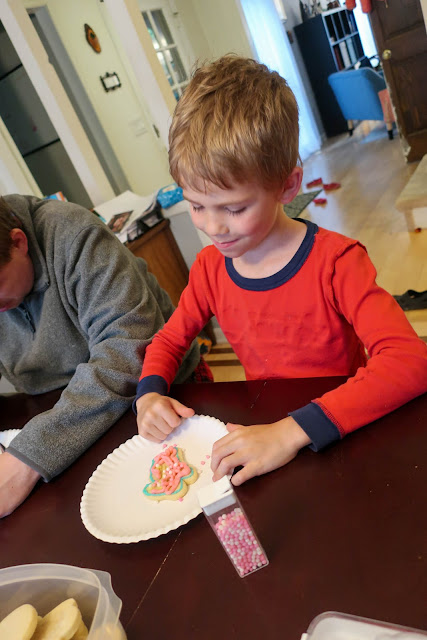 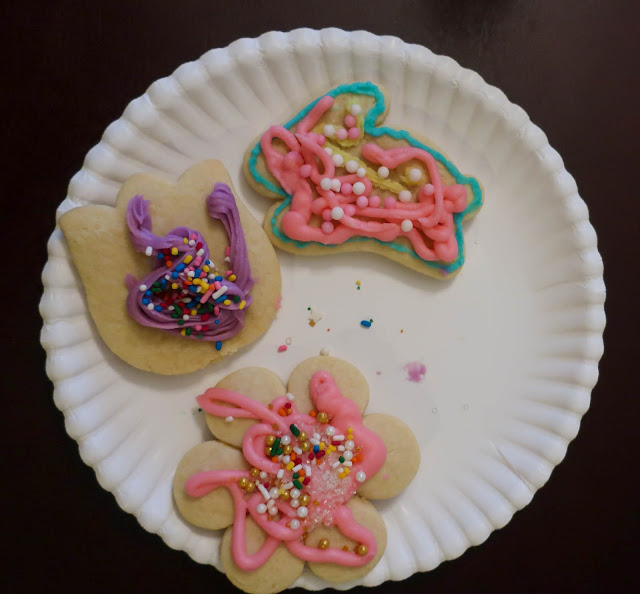 Miriam was very into this cookie decorating experience. Here she is with her adorable little rabbit: 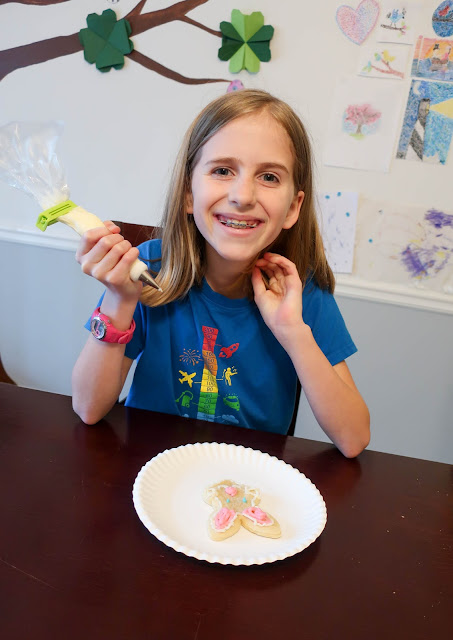 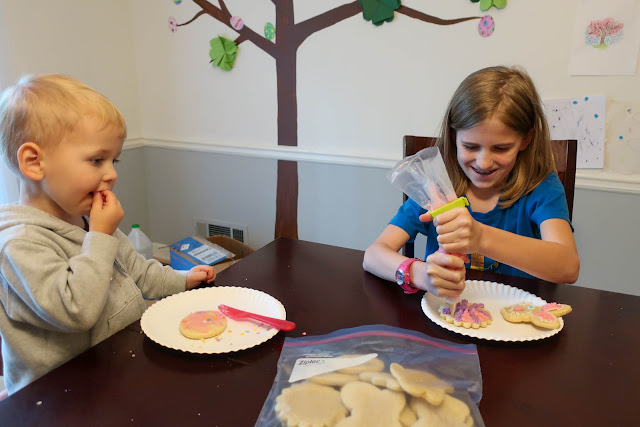 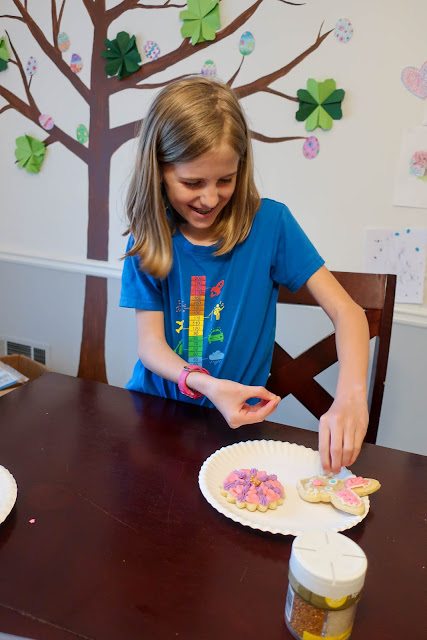 She and Rachel were both at this the longest, taking on Benjamin's spare cookies and coming up with elaborate designs (though the cookies they decorated the very last were of lesser quality due to dwindling icing supplies). Here are Miriam's creations: 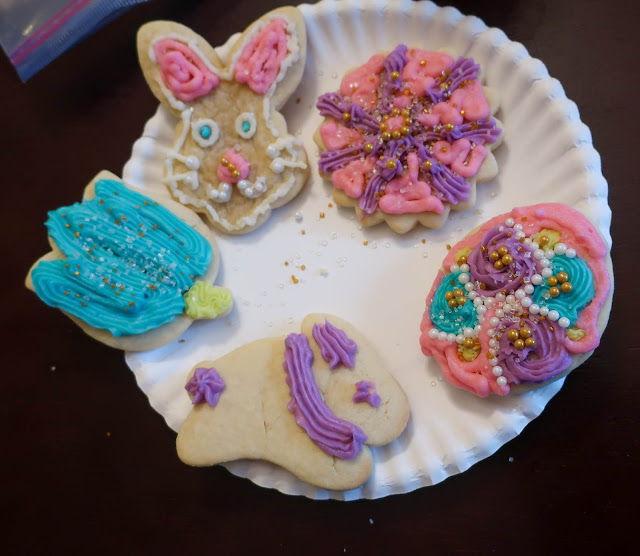 I liked this egg with all the little rosettes the best: 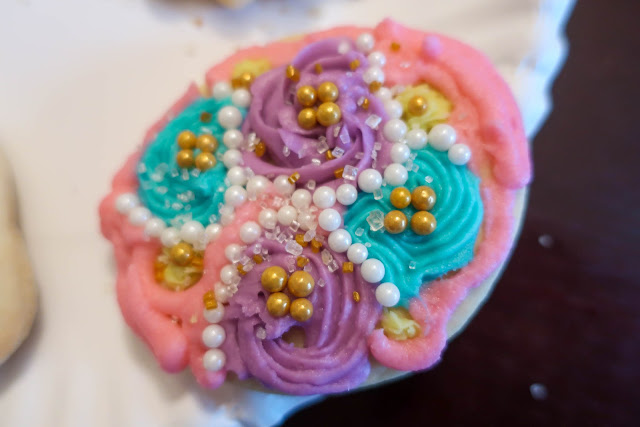 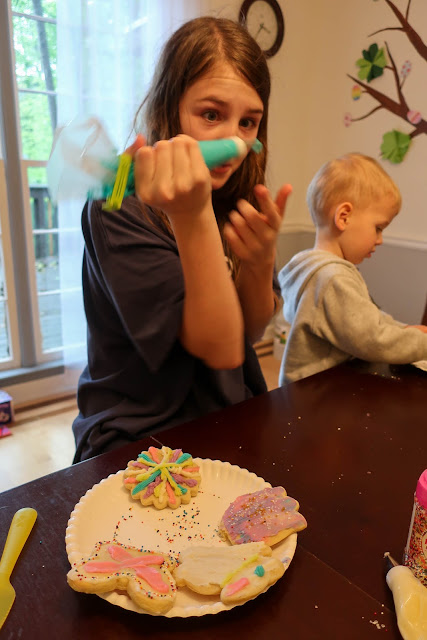 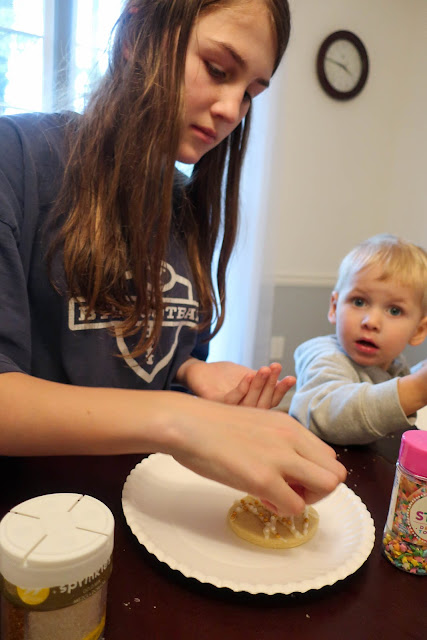 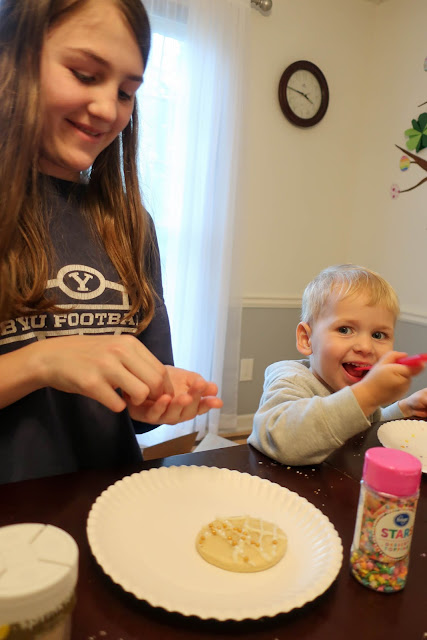 Here are some of Rachel's early creations: 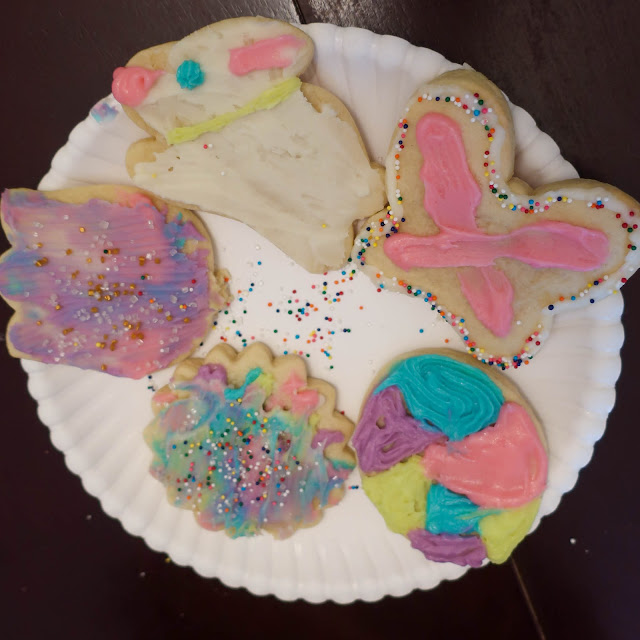 And her later ones: 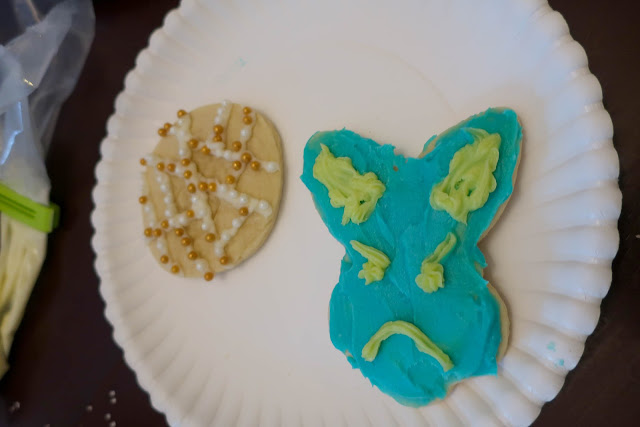 Here's Andrew decorating his cookies. He made up the icing for us while we were out on a walk (to hit up the kids' chalk obstacle course one more time before it got washed away in the storm; we arrived home just before the first crack of thunder), which was his first time making icing somehow. He was really quite artistic with his cookies: 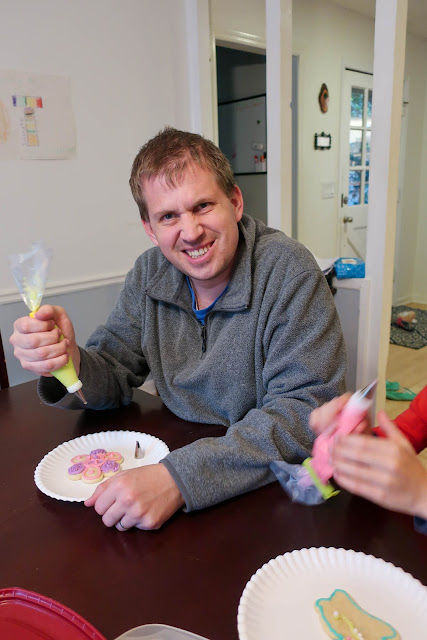 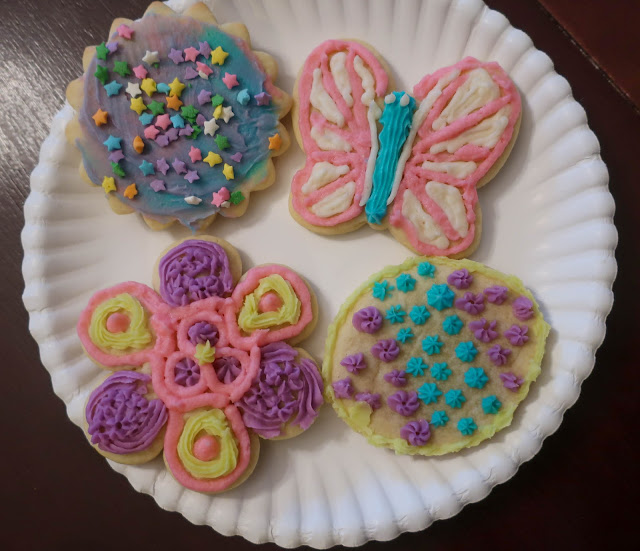 And here are my creations: 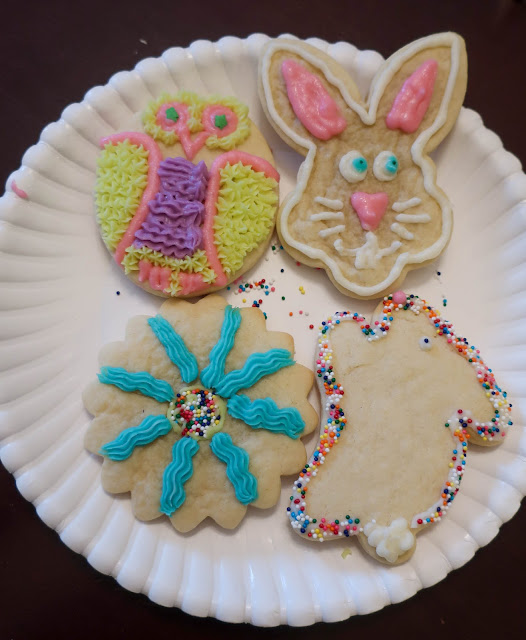 Zoë, for some reason, was under the impression that I hate this kind of cookie so she was surprised that I was so selflessly making them. I'm not sure where she got that idea. I mean, sometimes rolled sugar cookies aren't my favourite because usually when I want cookies I want cookies now and most sugar cookie recipes require refrigeration. And then there's all the rolling and cutting and the decorating mess and...they are a bit of work. But you get to stretch that work over three days so it isn't so bad. It's true that we don't make sugar cookies very often, but I'm not sure how she got it into her head that I hate sugar cookies.

My theory is that it was an exchange we had over the cookie dough beater on Friday when I made the dough (and was fasting). She and Alexander were sitting in a box together, colouring (normal stuff) and I finished mixing the dough and she said, "Are you going to lick that?"

So they sat together in their box and licked the beater clean. 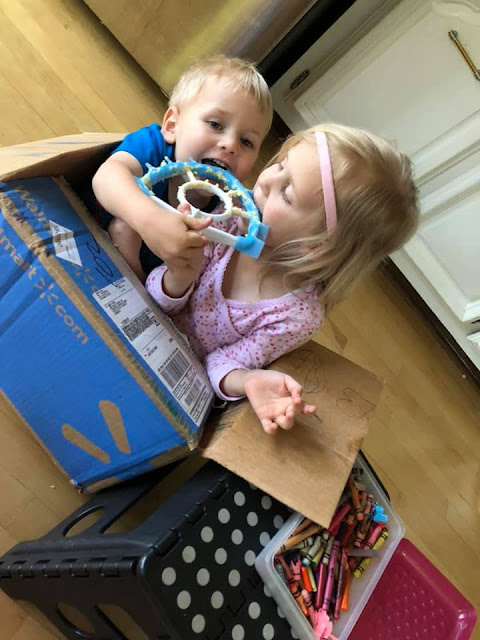 ...Which is, like, super sanitary (especially given our global pandemic (but also, you try giving just one of them the beater and see how things go down...)).

"Just one little lick," she tempted.

So I guess that could have convinced her that I, myself, didn't like sugar cookies and had made them for everyone else out of the goodness of my heart. But, really, I also wanted sugar cookies, too, so apparently I'm not as nice as she thought. 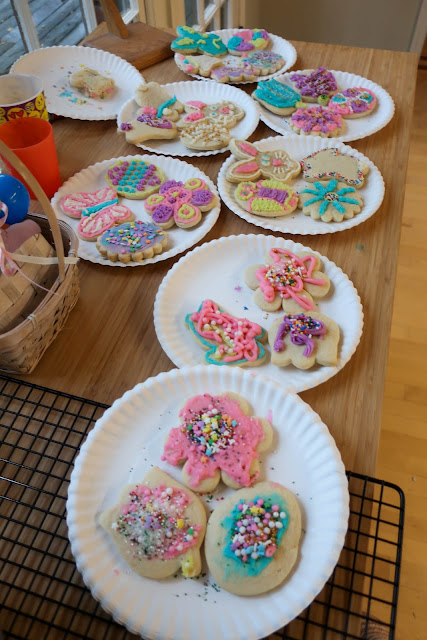