I had to take Alexander to the doctor for his well-child check this morning. The office postponed all well-child checks for children over the age of five but felt it was important for the little ones to keep their appointments, just to make sure they stay on track for growth and their vaccine schedule and so forth.

I'll admit I was a little nervous to leave the house. Aside from family walks around the block (and two walks at a nearby park), I haven't left our property for a month. There was absolutely no traffic, so that was nice (just how I like it; I saw like ten other cars). Alexander and I both had face masks to wear and I also brought along some (washable) napkins, some Clorox wipes, and a zip lock bag. Also, I packed books that the children wouldn't be sad to put aside for a few days while they go through their detox period (in other words: we did not bring the Daniel Tiger book).

I used the napkin to open doors and push the elevator button and then I put it in the zip lock bag.

We signed in at the front desk (I used my own pen) and then we sat (alone) in the waiting room. I felt a little silly in a face mask since the receptionists were not wearing face masks, but the nurse was wearing gloves and a face mask so that made me feel better.

I did take off my mask (and Alexander's) while we were waiting in the actual room for his appointment. We were the only ones in there and, honestly, I made these masks with too thick of fabric so they'll be excellent winter masks but...they're a little stuffy. Maybe we just need to get used to them. But we were alone in there so I figured we'd be safe. We put our masks into the zip lock bag with the napkin I'd used earlier.

When the doctor came in she was wearing one of the fancy N95 masks. I'm assuming she just doesn't take it off all day, poor woman. She was just as friendly as ever and Alexander's appointment went smoothly (just like in the Daniel Tiger story we'd read last night), except that Alexander refused to show off his speaking skills. The doctor asked him several questions and Alexander just stared her down. I didn't expect him to speak; but I also know that he can.

To be fair, I gave him breakfast before we left for the doctor's office (when everyone else in our house was still asleep (but by the time traffic would already be rip-roarin')) and when we got home he wanted a snack and then he wanted breakfast with his siblings again. So he had a bowl of cereal with milk, a bowl of goldfish and craisins, and three pancakes all before 10:00 in the morning. That's quite a lot of food for a child his size!

Anyway, he's doing fine. And our doctor said they haven't seen any suspicious cases come through their clinic, so that's reassuring.


Still, we donned new masks before leaving the office and used another napkin to open all the doors. When we got to the elevator there was another parent waiting with their child (that's another new rule at the clinic: only one parent may accompany one child (no extra people allowed)). The parent also had a face mask (the child was an infant and was in an infant carrier with a cover), so I felt less weird about my mask. He got in the elevator and then after the doors closed I pressed the call button for myself (I have no idea where the stairs are in this building) and another parent/child (also with face masks) came while I was waiting and did the same thing.

So people are pretty good at this social distancing thing!

When we got to the car we took off our masks and put them in the zip lock bag and then drove home and took a shower and threw our clothes into the washing machine and sterilized all the knobs and buttons and switches we had to touch upon our entrance (which is the same thing Andrew does when he comes home from grocery shopping (which we need to do again this week because we're 100% out of produce (except carrots; we've got carrots))).

This whole situation is...wild. I keep using that word (I think more in speaking than in writing so far), but it's simply the word that keeps coming to mind. There is so much crazy misinformation circulating that it's hard to see the line between fact and fiction. Just today a friend posted a strongly-worded video that she liked and when a friend—who is an immunologist—refuted the claims in the video (made by a college drop-out) my friend thanked them for the information and said, "But I'm going to go with [name of video maker] because I liked what they said."

And inside I was just screaming (I may have done a little screaming on the outside as well).

I don't understand how people can just...listen to what they want to hear?

As my grandpa was so fond of saying, "Life is hard...and then you die."

But in the meantime, there's life to live! And it can be beautiful despite hardships.

Anyway, I've seen a lot of people wanting to make our situation seem a lot more rosy than it is (which, I mean, thankfully it's a lot less dire than it used to be, thanks in large part to the intense collective precautions we've taken as a society). One friend posted this: 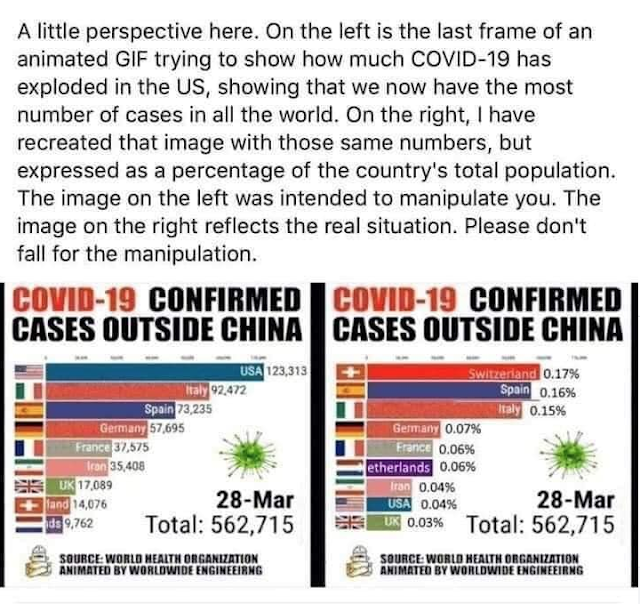 Unfortunately, those numbers are a little outdated, which I'll get to in a bit. I've also seen people overlaying the entire United States on Europe to show that we're dealing with a bigger country than anywhere in Europe (which is still problematic because we could also overlay the United States on a larger country (such as Canada or Russia) which would show that the issue is astronomically out of control in the United States).

The tricky part is the the tracker I use defines Europe slightly differently, so it cuts out a few countries that Wikipedia includes in their list (Armenia, Azerbajihan, Cyprus, Georgia, Kazakhstan, and Turkey) and includes a few that Wikipedia does not (Channel Islands, Gibralter, Isle of Man). I have manually added in the countries left out of Europe by World-O-Meter (where I am getting my numbers) and have manually subtracted the countries that aren't on the Wikipedia list.

When I add all those numbers up, the total number of cases in Europe to date is 1,039,495 with 88,030 deaths. The total number of cases in the United States to date is 640,185 and we have had 28,306 deaths. But then we have to keep in mind that (a) we are a few weeks behind Europe so we have quite a few hard weeks ahead of us yet while Europe's numbers of cases and deaths have been dwindling and (b) we have half the population they do (that's what people are getting all particular about with comparing the United States to Italy, right?) so let's account for that!

To calculate the crude death rate, we take the total number of deaths divided by the population and multiply it by 1,000,000.

So right now our death rate isn't as high as their is, but I imagine that it will get up there. On the whole, the United States had 26,945 new cases yesterday (2,407 deaths) while Europe (this time only going with World-o-Meter's straight numbers) had 28,969 new cases (and 4,157 new deaths).

I can't even say why I'm writing this all out. It's not to prove that one place is doing better than another. I can't offer any such commentary. All I can do is sit here in shock at how awful these numbers are—for both places. It's horrifying. And also surreal...because my children are just playing outside like it's a beautiful summer day. I think that's what's so upsetting to so many; the disease hasn't touched someone they love so they feel life should carry on. But we need to remain worried about this! It's not a disease to be trifled with.

Anyway, my point is. Things don't look great in Europe but comparing United States to Europe as a whole doesn't exactly make things look great for the United States either. Both places are pretty hard hit right now (even if it's centralized in New York right now, you never know when it's going to come and explode in your town (even if that explosion is fewer than 100 people it will be 100 people too many, don't you think?)).

Utah has about as many cases as Argentina.

I just...I mean...that chart above is interesting, I suppose, but it's also misleading (for all it claims not to be) but if we're going to make comparisons that way, let's make comparisons.

And, please, don't take my numbers for actual anything. I am just me. Look to people who know what they're talking about, please. If you have a dance teacher telling you one thing regarding this virus and an immunologist telling you something else, go with the immunologist. Every time. I don't care if you like what the dance teacher has to say. She doesn't know what she's talking about (just like me: I also don't know what I'm talking about, except that I really like when people check their sources).

Miriam decided she wanted to introduce her younger siblings to "Little Einsteins," earlier this week, so I told her to find out where it's streamable. She left do a little research and then came back to inform me that it's on Disney+.

Then she got all indignant and said, "But did you know that it's banned in, like, 37 countries!?"

"Oh, because it apparently destroyed every single piece of artwork on the show and trashed all the classical music in the world and its theme song is really annoying and..."

I hemmed a little to let her know that I was listening...but was feeling skeptical since those things didn't seem like very truthful things (or good reasons for banning a show). I could tell she thought they were silly reasons as well because she loved that show as a (younger) kid and that's why she wanted to share it with her little siblings.

"Yeah!" she went on. "It's been banned in, like, Mexico and North Korea and apparently even on Sanity Island!"

"Yeah. Is that even a real country?" she asked, still fuming a bit.

Her source was the UnAnything Wiki, which...I just...I know she's ten but, like, the name of the website is a good clue that this is going to be a bad source for pretty much anything. But, it can be hard to take a critical view of a source you're reading, to parse out the truth from the fiction (the show probably is banned in North Korea), to understand the motivation of whoever wrote the article (or the knowledge of the writer) and so forth.
Posted by Nancy at 5:03 PM