Can I eat this? 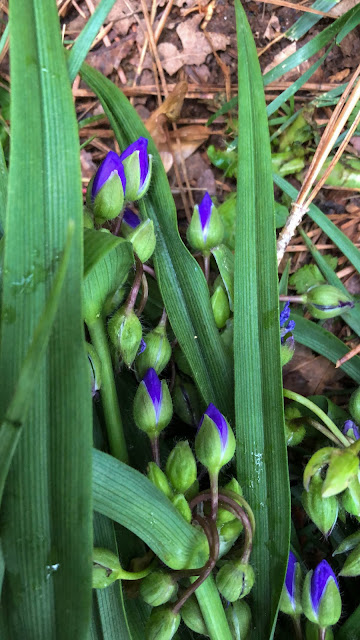 We planted a good number of Virginia spiderwort last night, but a lot of the stems had had their roots chopped clean off. Miriam still wanted to save the blossoms so she made a couple of flower arrangements for the kitchen table. 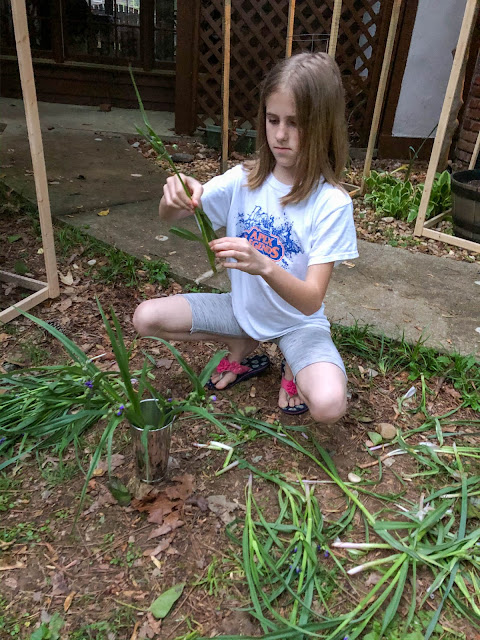 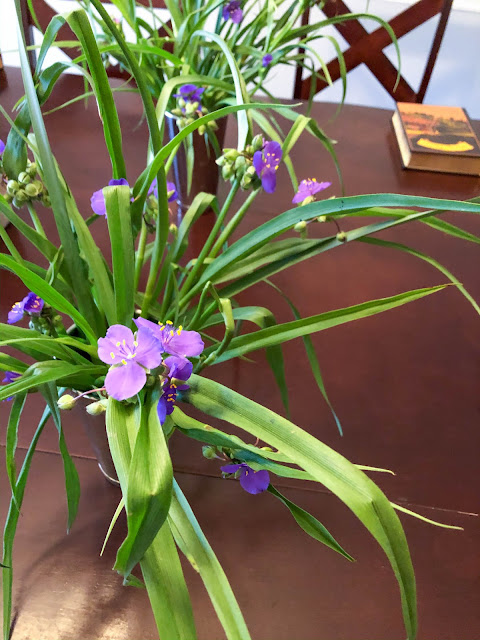 My children are obsessed with eating plants. They always want to know whether this plant or that plant is edible. They call clover and dandelions "snacks" when we're out walking and will rush to go pick a flower and eat it. And it's kind of weird but it's who they are.

So guess what Benjamin wanted to know first thing this morning—"Can I eat this?"

I looked it up and, as it turns out, spiderwort (of the bluejacket variety, such as this) are completely edible (while spiderwort of the wandering jew variety are entirely inedible; they are two very different species that just happened to stumble upon the same common name). We all immediately tried some of the velvety blue petals, which have a sort of cucumber vibe in taste and a spinach vibe in texture.

The kids have big salad plans for later on today.

Speaking of salads, yesterday Benjamin decided he'd have salad for breakfast (today he had rice and broccoli (we don't discriminate against non-breakfast foods for breakfast)), announcing, "I’m going to have a nice healthy salad for breakfast. Greens, greens, nothing but greens! I used to not like salad, but here I am, still trying to like salad!"

I don't know why he said he used to not like salad. My observations/recollection is that he has consistently enjoyed salad. (And yes, that "greens, greens, nothing but greens!" line is from Into the Woods). His little quip about not liking salad but that he's still trying to like salad, however, is rather hilarious since that's how a lot of people feel about a lot of vegetables.

Anyway, I figured that since my children are always and forever asking me what they can and cannot forage for and eat, we may as well actually learn about that. So I ordered a food foraging guide for the south and we're going to work on our plant identification. To that end, I made the kids little field books to take notes in (printed from this website), a project they are all rather excited about. Benjamin even—get this—made an effort to draw a nice picture in his field guide: 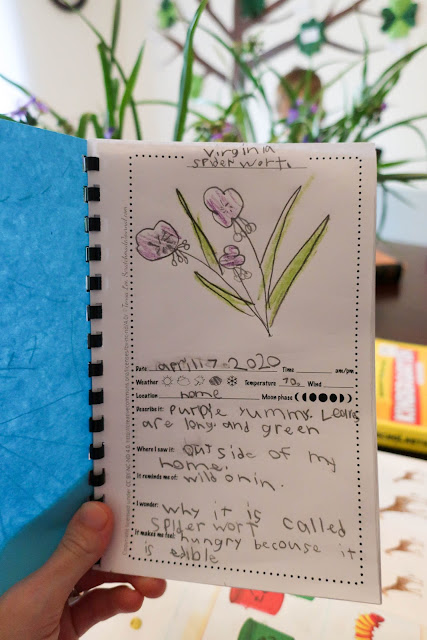 I love his description of the plant: "Purple yummys."

I made him add the "leaves are long and green" part. Also, this plant makes him feel "hungry because it is edible."

Miriam's field guide is a little more open-ended than Benjamin's is. Here she is working on her notes: 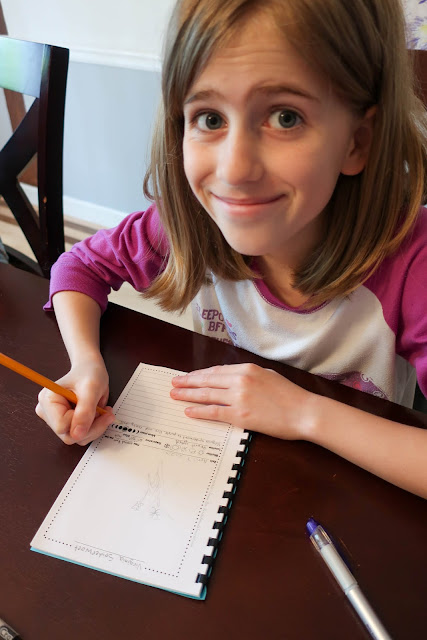 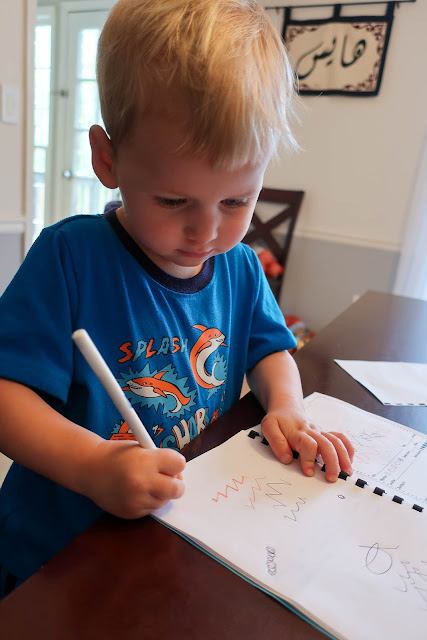 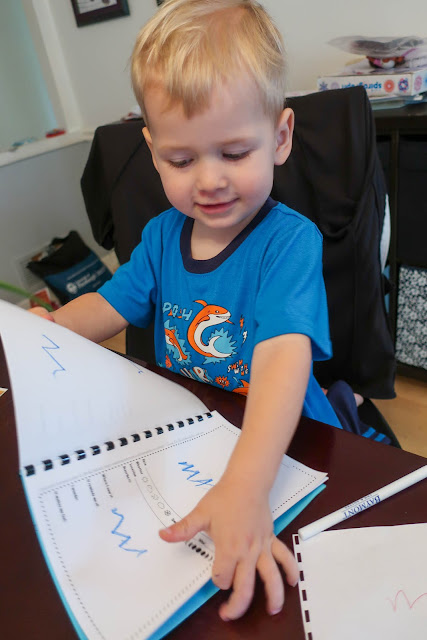 I was very impressed with Zoë's efforts in her field notebook. She drew a lovely picture and wrote the name of the plant—which is long—at the top of her page: 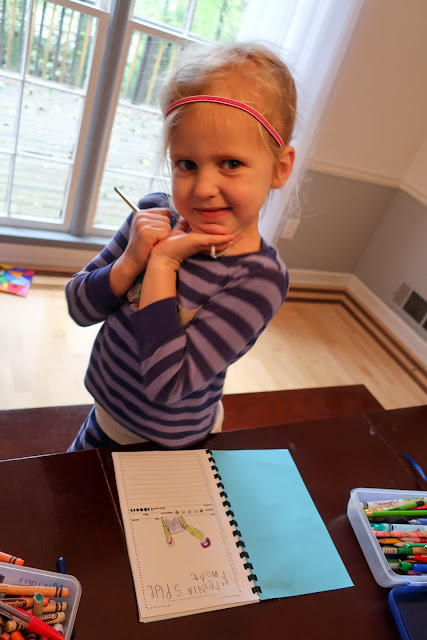 And here's her cover: 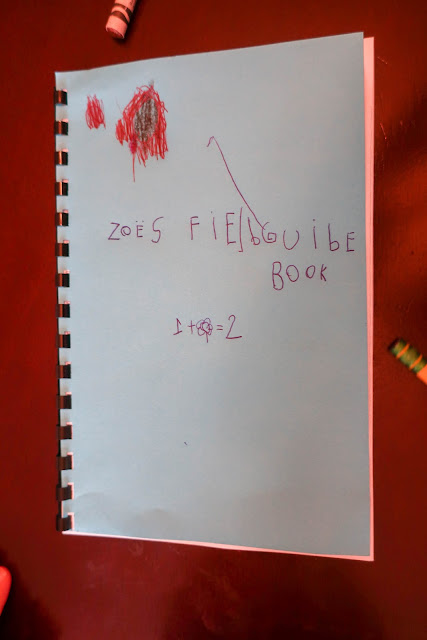 I'm about to take the kids on a walk around the block so we can make a few more observations. We will be keeping a keen eye out for doggy doo...
Posted by Nancy at 12:14 PM