Bubbles with the littles

We had a fairly busy day at home with schoolwork and other projects, which I will write more about tomorrow. Right now I'm tired (just waiting for Andrew to be ready for bed; he's working on a chapter for a textbook and I just finished editing the first half of said manuscript) so I'll write about a light, fluffy part of our day: bubbles!

The kids all got bubbles in their Easter baskets.

Actually, that's not quite true. We did not include bubbles in Rachel's basket because I'd gotten a pack of eight bubbles containers but then we did a birthday parade for Zoë's little friend Kate's birthday so I broke into my Easter stash and gave (ie. dangled a gift bag out of our car window for) Kate some of our sidewalk chalk and four containers of bubbles (one for Kate and each of her siblings), which left me with only four containers of bubbles left. I figured Rachel wouldn't be too downtrodden if she didn't get bubbles in her basket since she's reached the age where she gets more enjoyment over blowing bubbles for other (littler) people than she does blowing bubbles for herself.

And also Alexander can't blow bubbles very well and is more than happy to share that job with the bigger kids so he can pop them. So there were still plenty of bubbles to go around!

Here's Alexander trying to chasing (and admiring) some bubbles: 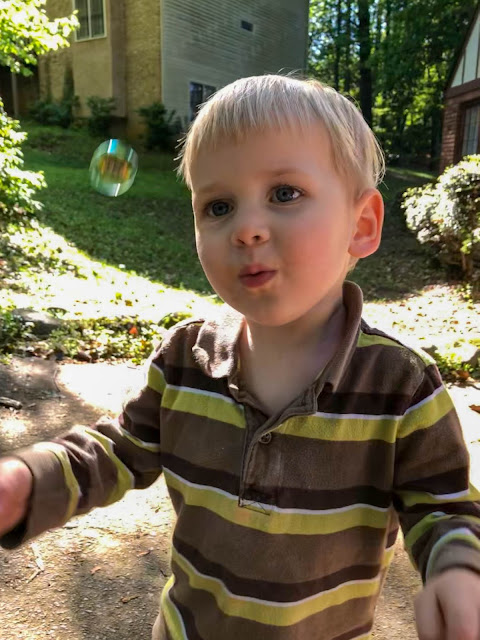 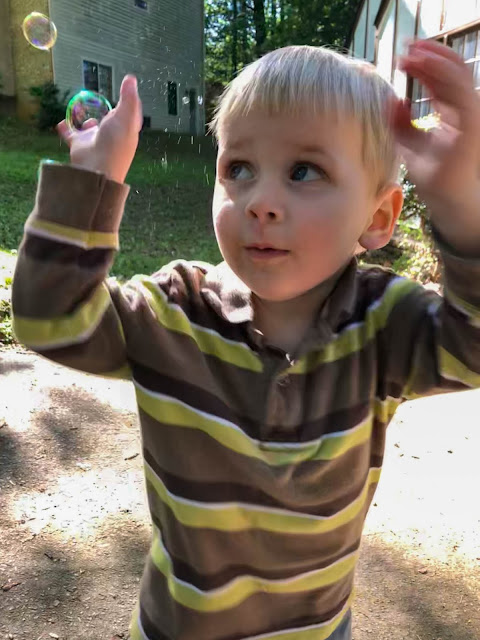 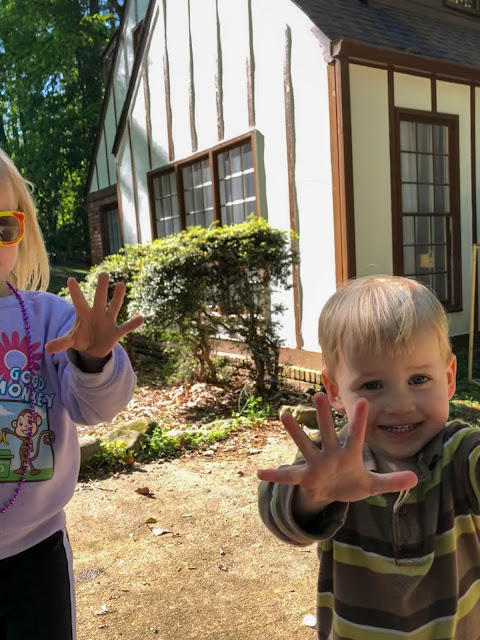 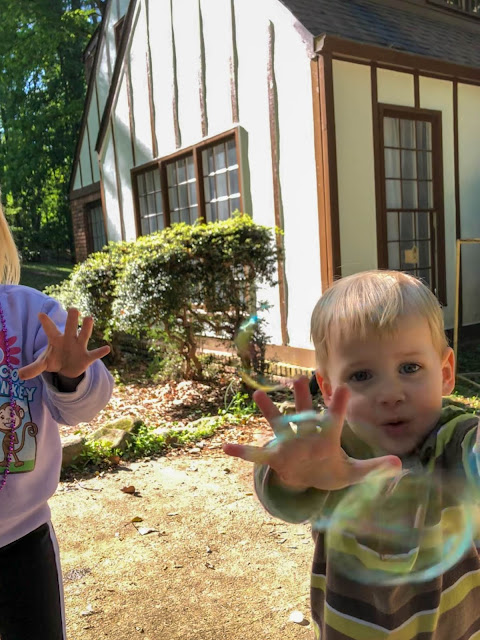 He's such a sweet little thing. Earlier today he'd helped himself to a bowl of crackers (he is not shy about getting himself snacks (especially if I've already said no)) and I snuck one out of his bowl. He gasped (with elation, mind you) and said, "Mom! You shared with me!" Then he started singing a song à la Daniel Tiger, "Sharing is kind!"

He may not sleep through the night yet/still, but he's such a sweet boy. Tonight when he got up (not too long ago), I told him that I was going to put him back into his own bed. He immediately started choking back tears and when he started wailing he reached up to cover his mouth with his hands. He was devastated by the news. I wrapped him in a hug and he hiccuped, "That's so good. Can you just hold me for a little while first?" So I sat in the big comfy chair and held him while he calmed down his breathing (and I read a chapter of my book). That poor boy just gets to missing his momma "berry much" so quickly. He "berry" needs me a lot of the time. But he did eventually allow me to tuck him back into bed without tears (though I had to lie in the hallway until he fell back asleep). 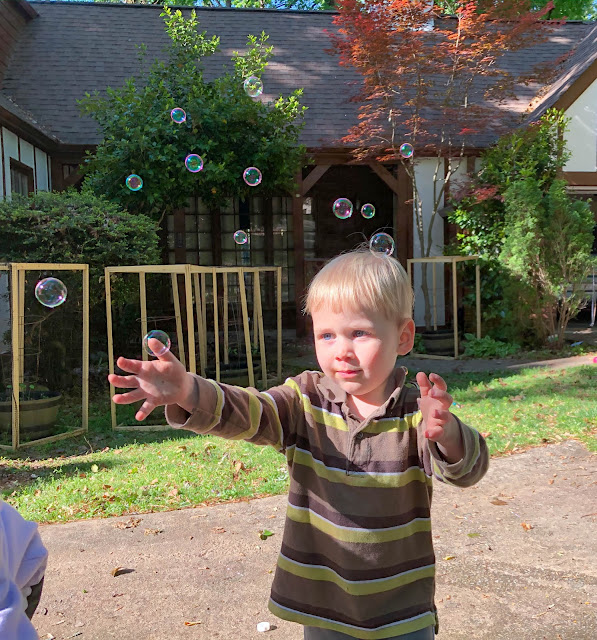 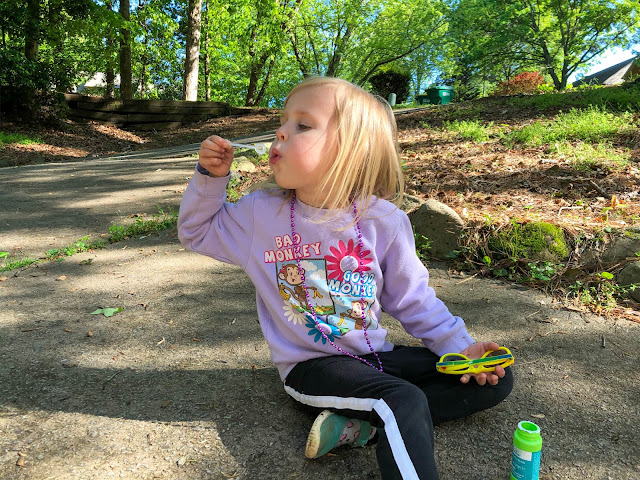 She's looking mighty trendy with her accoutrements (her bling and sunglasses). We came across that word in The Adventures of Tom Sawyer, our morning read, not too long ago and then in the evening when I cracked open Anne of Avonlea and—would you believe!?—it used the same word.* So now that word is in my children's vocabulary, apparently. 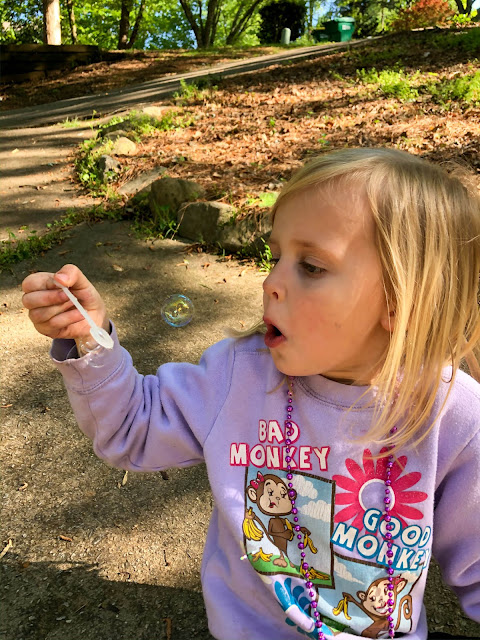 Look, she caught a bubble wish! 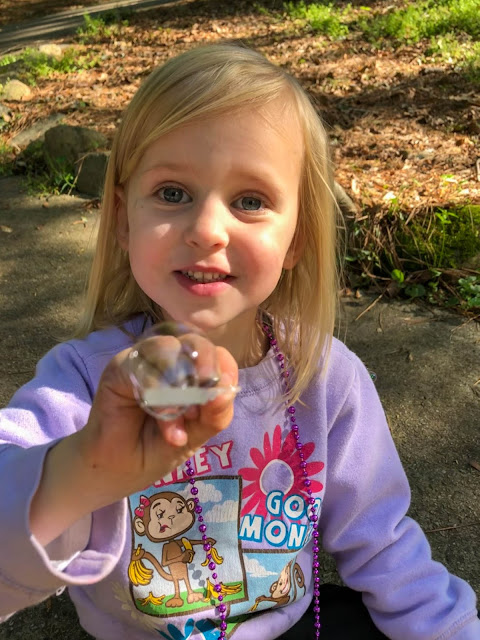 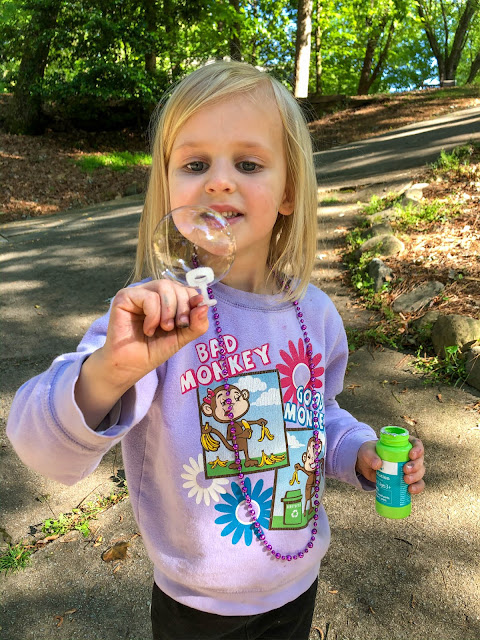 If you catch a bubble after it's been released from its wand, you earn a wish (or so my children have come to believe, though I'm not exactly sure how because I'm not sure I believed that as a child). 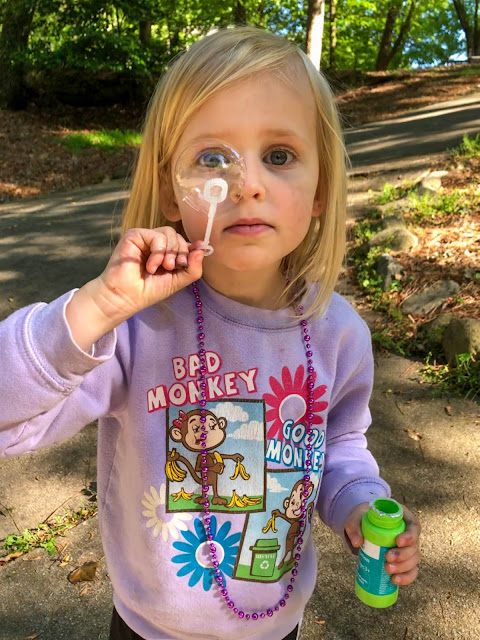 She's getting to be such a sweet, bubbly sweetheart (I can't believe she'll be five next month): 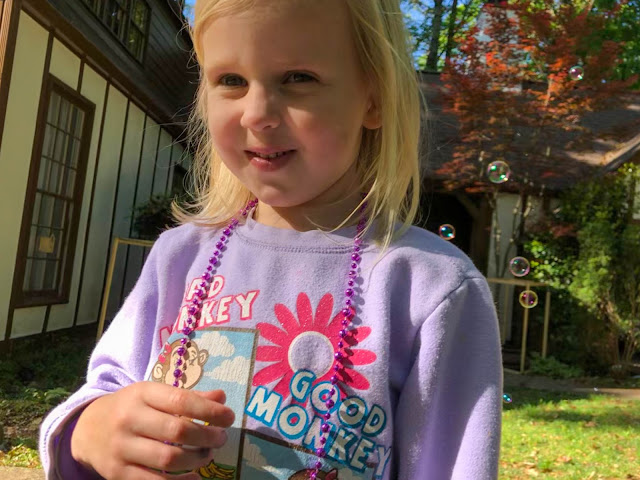 * Chapter 20 from Anne: Anne completed her toilet by tying a big red and white spotted handkerchief that had belonged to Matthew over her head, and, thus accoutred, betook herself to the kitchen chamber, whither Marilla, before her departure, had helped her carry the feather bed.

And chapter 8 from Tom Sawyer: The boys dressed themselves, hid their accoutrements, and went off grieving that there were no outlaws any more, and wondering what modern civilization could claim to have done to compensate for their loss.
Posted by Nancy at 1:31 AM