Our neighbour up the street has an amazing garden. He's always out there tending it. I asked him once how he keeps the deer away (there are so many deer around here) and he says he goes out every evening and sprays deer deterrent. I don't have that kind of commitment to the cause so I've mostly been researching deer-resistant plants.

Anyway, I was out walking with the kids sometime in the past three weeks (definitely within the quarantine period) and our neighbour called out to me to ask if I would like some daffodil bulbs. He was getting ready to separate/thin his and would love to share.

"Oh, sure," I said with a bit of a question-mark in my inflection. "That would be awesome."

"Was it you who wanted daffodil bulbs?" he asked, having caught my hesitation. "I thought I'd talked to you about this. Or was it my wife? Maybe I had spoken to Michele about it. Yes. I think that's what it was. She saw on Facebook or something that you were wishing for some daffodils."

I am not Facebook friends with his wife so that means she was totally stalking my profile, which I think he realized while he was talking. But, that's fine with me. I think it's more funny than anything; it's just part of the world we live in. Besides, they're wonderful neighbours and I have daffodil bulbs now!

When we were on our way home from our walk this evening (poopy flip-flops in hand), our neighbour (who was out tending his garden) called us over waving a big clump of Virginia spiderwort.

"Do you want any of this?" he asked. "I already sent some daffodils home with the rest of your crew. These will send up little purple flowers."

So the kids and I spent about an hour planting bulbs when we got home from our walk and I'm so excited to see if next spring will bring me beautiful blossoms (or if I will somehow manage to kill everything in my garden). Only time will tell...

In the meantime, we've begun constructing cages for our vegetables. We have to keep squirrels away so they don't steal the seeds we've planted, and we have to keep deer away so they don't eat the plants, and then we also have to keep squirrels away so they won't steal our vegetables (seriously—in Durham they would get into my cherry tomatoes and just chuck them all over the place and it made me so angry; like eat them or leave them, please). I suppose we'll have to worry about pollinators getting through the netting. I figure smaller bees can get through, but butterflies and larger bees certainly will struggle, so we may end up taking them off during peak bug-pollinating hours and putting them back on during peak deer-scavenging hours.

Anyway, all the kids (except) Rachel helped me put together some frames this afternoon. It was...an exercise in patience.

Here's sweet Alexander with the hammer: 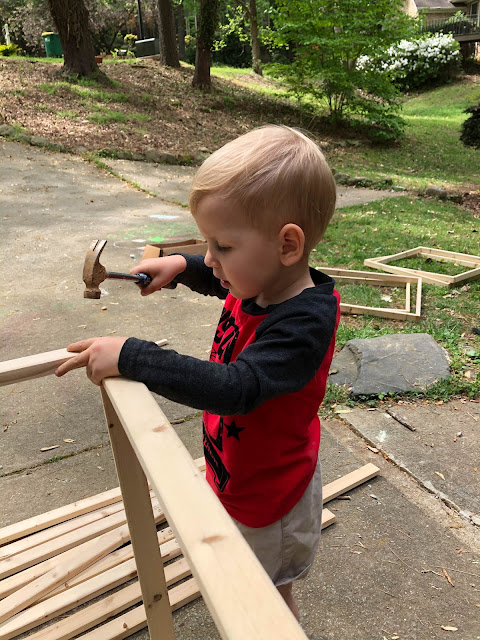 And here's Zoë bringing the hammer down on his sweet little fingers: 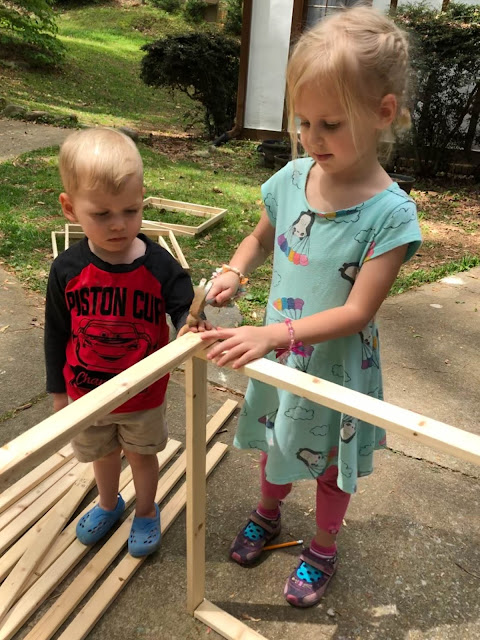 I need to upload the video of this. Technically I don't have a video of it; I have a "live photo" of it (so three seconds of footage) and it just catches him sticking his hand up to rest it right there in the line of fire. Like, why he put his hand there, I don't know! He knew she was swinging the hammer! 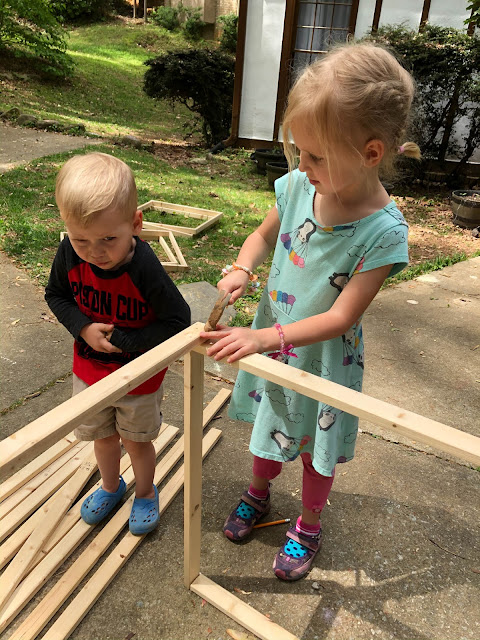 Luckily it was only Zoë with the hammer; she tends to give the nail little taps instead of really pounding them in. If Benjamin had the hammer we might have had a bigger problem on our hands.

She checked on him and then continued sweetly tapping her nails in. 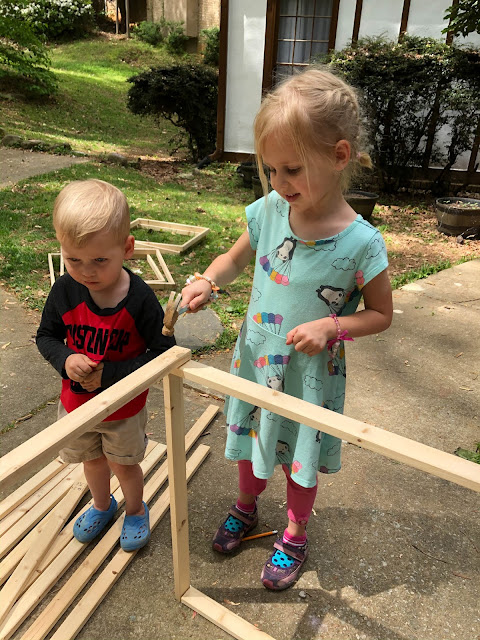 Oh, I cut all that wood, by the way. With a table saw. Or whatever kind of saw we have. It was loud and scary but I did it. 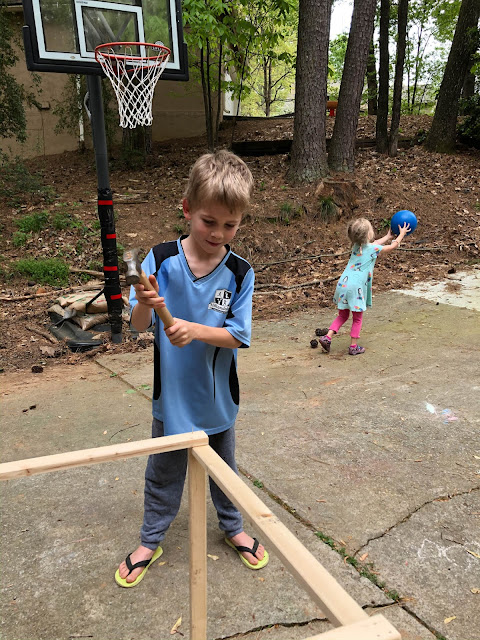 Here's Benjamin and Miriam working together: 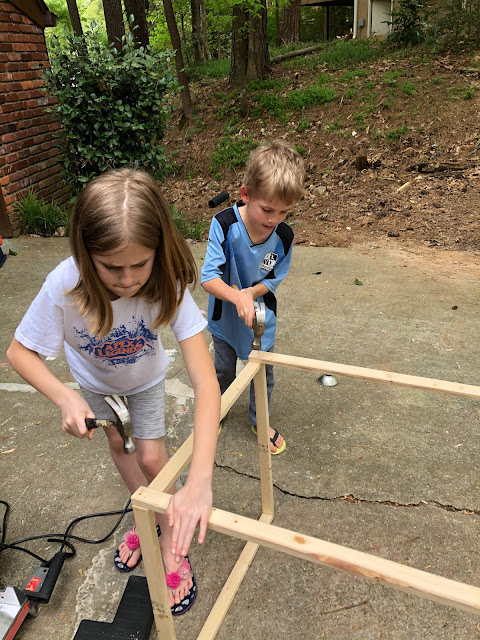 Here's Benjamin feeling so proud that he drove a nail in from start to finish (I started other nails for him and let him finish): 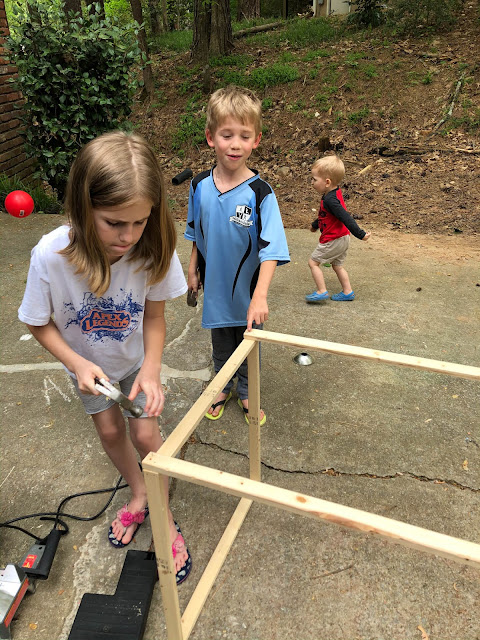 Zoë and Alexander eventually gave up playing with balls and joined back in the hammering. We only have three hammers, though, so here's Alexander hammering with a rock (he's not hitting nails or anything he's just banging stuff because banging stuff is fun): 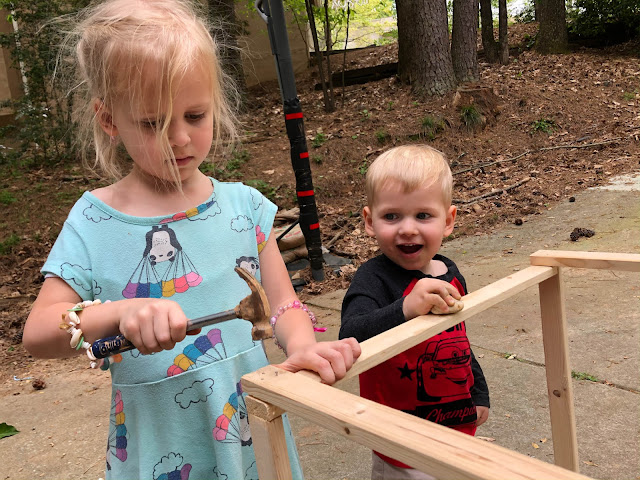 Here's Benjamin carrying one of the finished frames over to one of our pots: 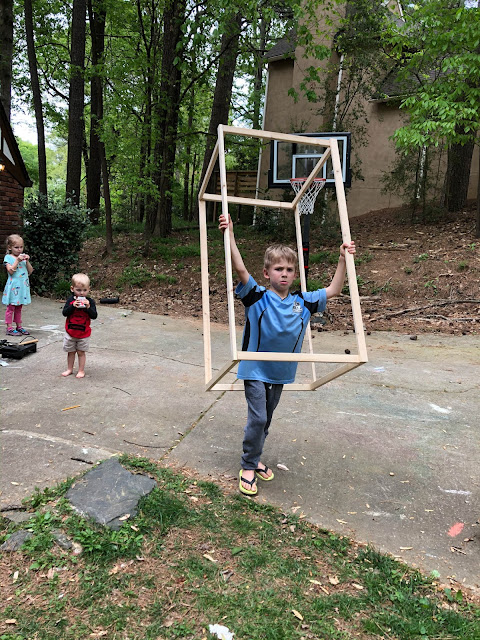 And here's what it looks like with the netting on (this is cucumbers and nasturtium): 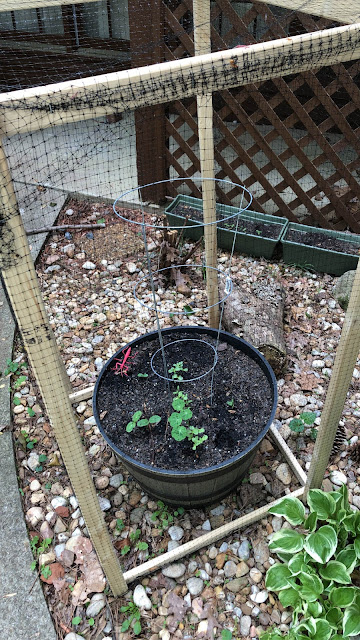