The Easter Bunny set up the children's baskets last night and Andrew went in to peek on them before going upstairs to bed. He found their arrangement baffling. 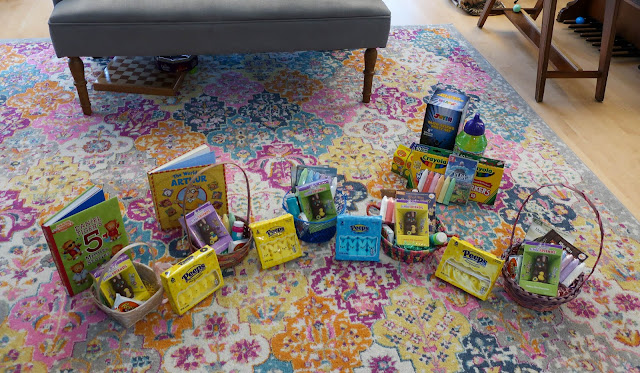 "Sure," I said. "They're in age order. But, I mean, the contents is pretty telling for each child."

"Come and look," he said, so I followed him back downstairs.

He pointed to the baskets.

"These...are in age order?" he asked, still as confused as could be.

"Then..." he paused a long pregnant pause. "The Daniel Tiger book is for Rachel...?"


"Uh, no. The Daniel Tiger book is for Alexander."

"What do you mean? It goes Alex, Zoë, Benjamin, Miriam, Rachel. Age order."

"Oh!" he said, finally understanding the method behind my (apparent) madness. "You did it backwards! Oldest child goes first with age order."

By this time he recognized his folly and was in tears of laughter.

"Enough, enough!" he begged (he really does suffer from oldest child syndrome and he knows it). "Your order is legitimate. I get it. It's fine. Let's go to bed."

As Aunt Sarah pointed out in one of her responses to my probing questions about her childhood, she revealed that being the middle child was hard because on Christmas mornings they usually opened presents youngest to oldest (age order, Andrew) but sometimes to switch things (once the little kids got old enough to have any sort of patience) they would open presents from oldest to youngest, which meant that she, as the middle child, never got any sort of preferential order when it came to opening presents. She was always stuck in the middle.

Fortunately, Easter baskets are kind of a free for all at our house, so the children just dug right in, though they were a little confused by the order at first as well. 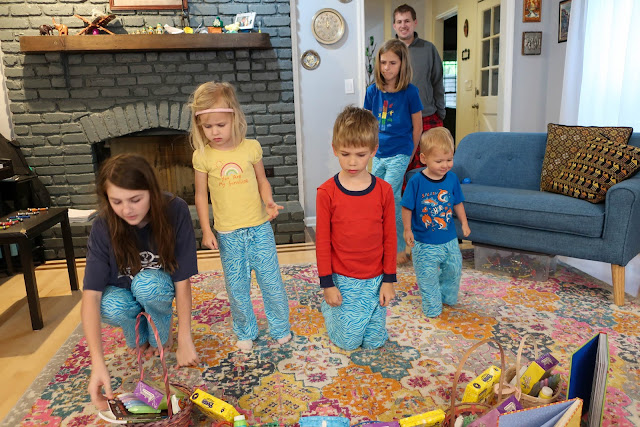 It only took them a few seconds to parse things out, though. 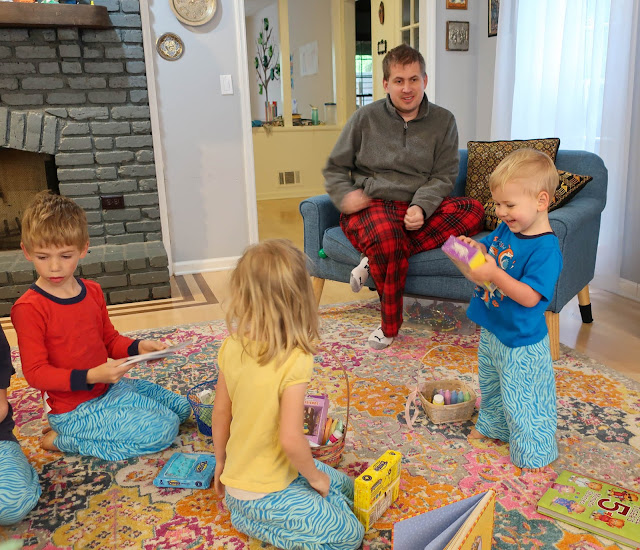 Alexander was so pleased by everything in his basket. Treats! Chalk! Bubbles! A Daniel Tiger book! 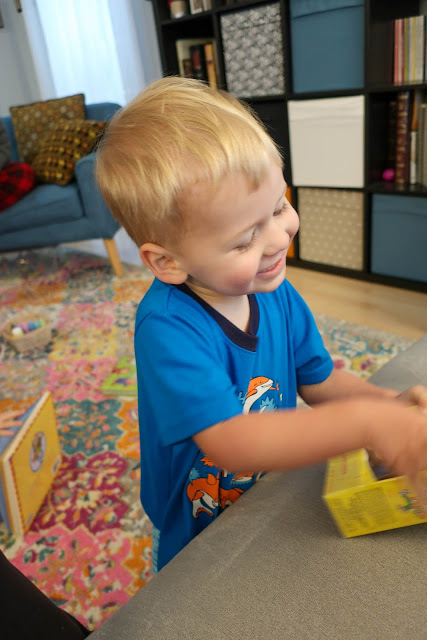 Zoë was, likewise, very excited by the contents of her basket: 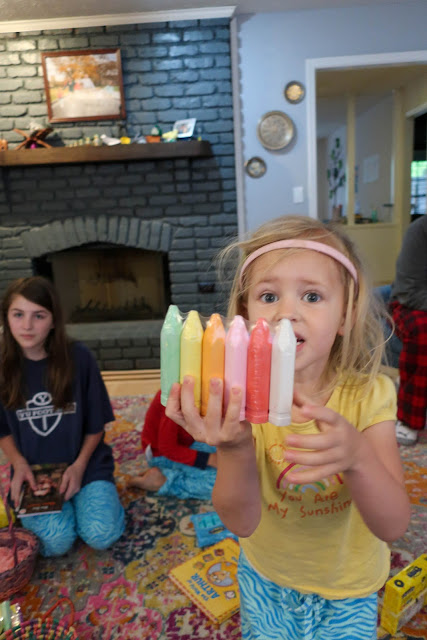 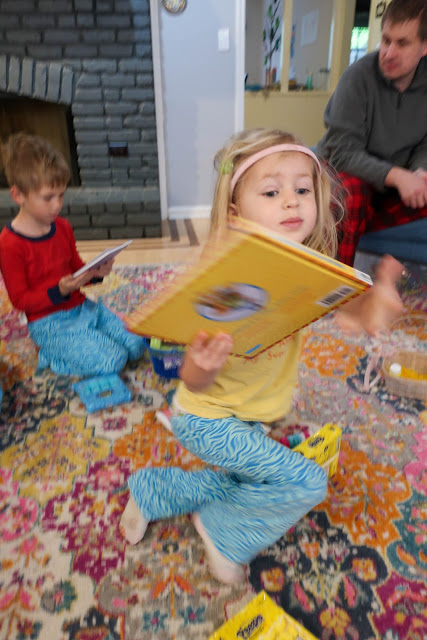 Here's Benjamin showing off some things from his basket: 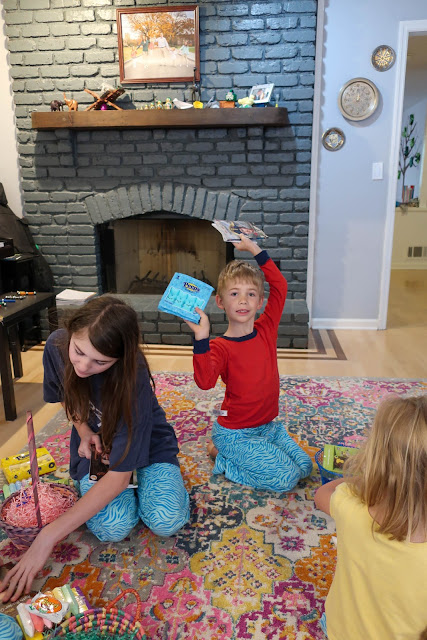 And here's Miriam realizing that she didn't get any Peeps: 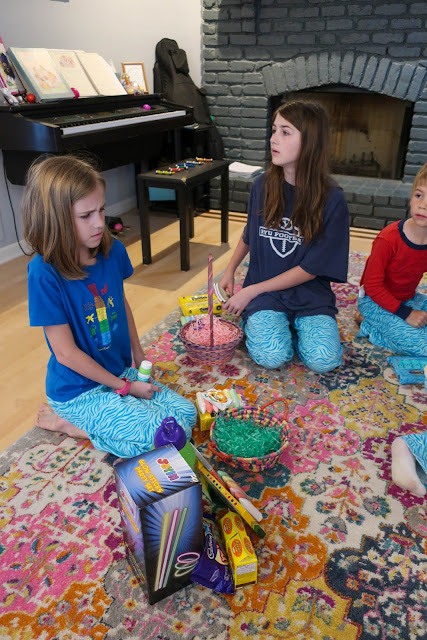 I told her that that was okay because Peeps are disgusting. And then I informed the children that Dad had only been able to find four boxes of Peeps at the store, so I propped them up between the baskets to signify that they were to be shared items. And by "Dad" and "I" I mean "The Easter Bunny," obviously. So they piled them up in a communal place and everyone was happy again. 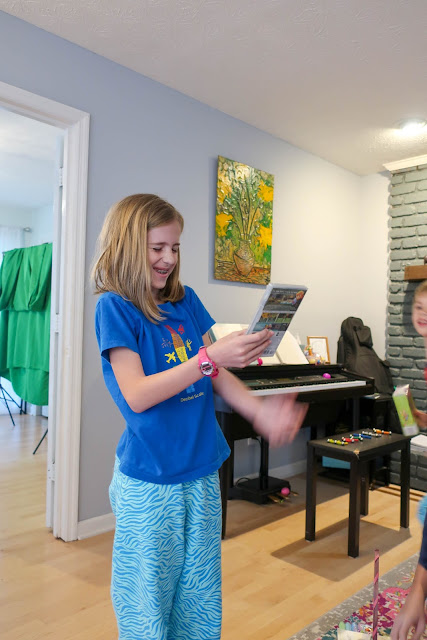 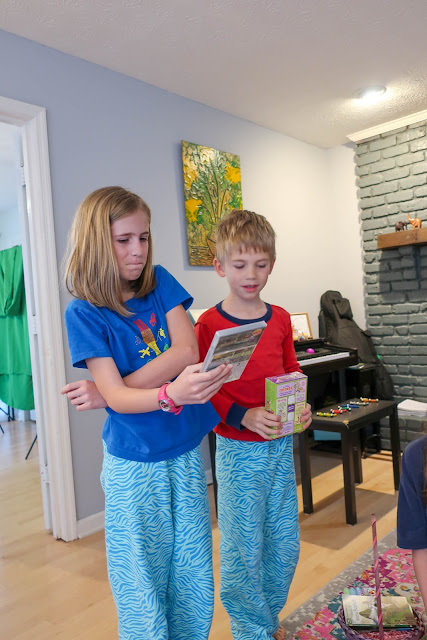 And here are the kids scrambling for eggs when I told them that the Easter Bunny had taken all the eggs they found yesterday and re-hid them (that pesky rabbit). 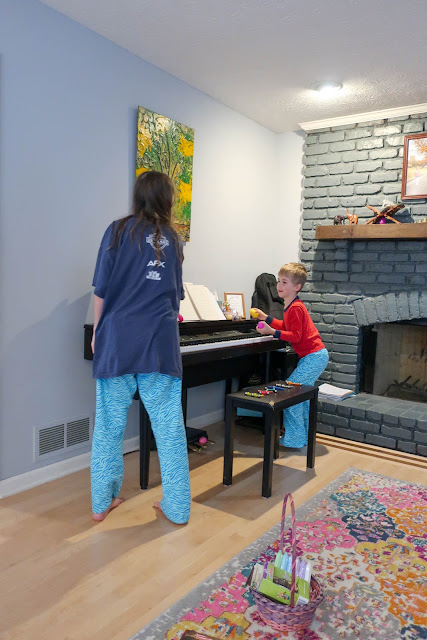 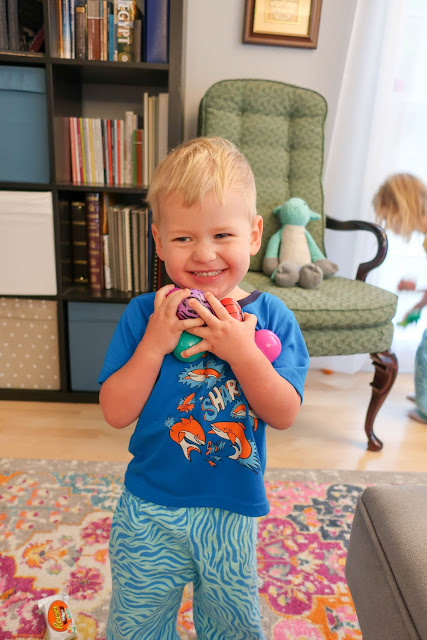 It's a real struggle at our house, honestly: 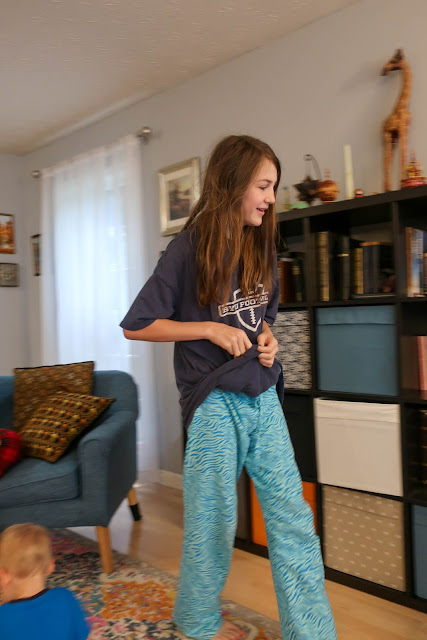 The middle three have things mostly figured out. Here's Benjamin and Zoë arguing over who spotted an egg first: 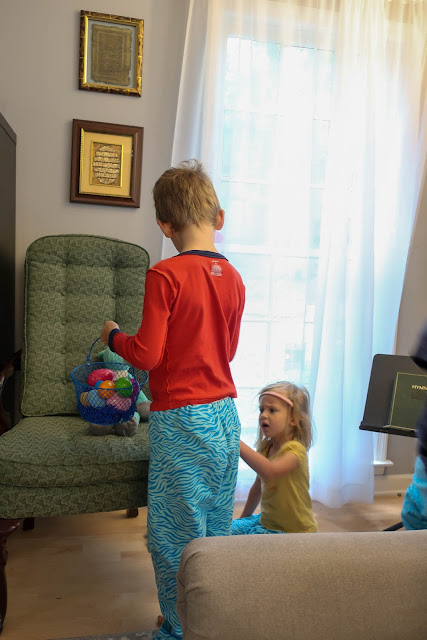 And here's Miriam pointing out an egg for Alexander to find: 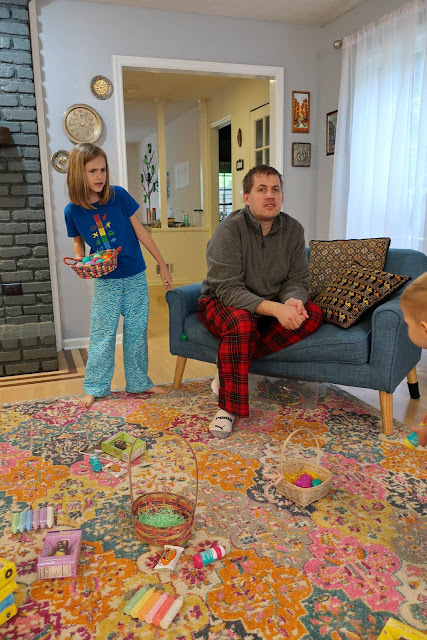 And here's Alexander and Zoë both rushing over to try to get to the egg first: 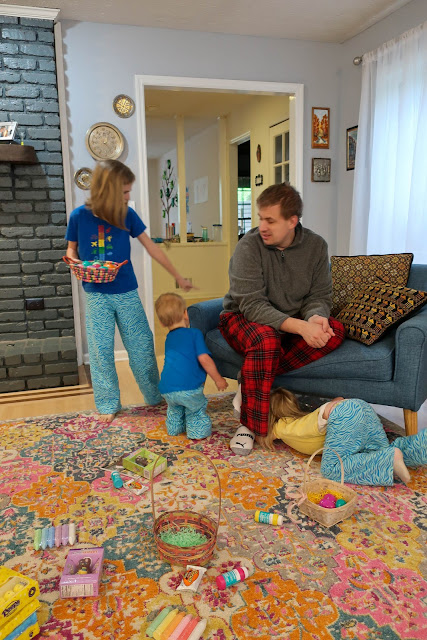 Once he was over his initial excitement of having a second Easter egg hunt, Alexander began stomping around the living room grumbling about how awful the Easter Bunny is for stealing his eggs. "Don't do that, Easter Bunny. That's not nice! I don't like when the Easter Bunny steals my eggs!" 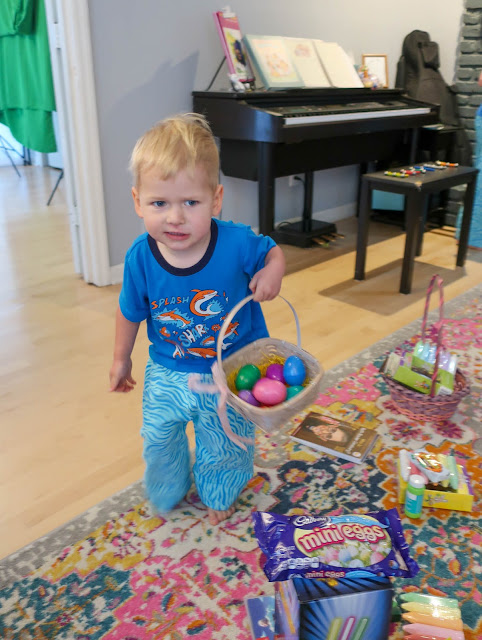 Here's Zoë flinging herself into Andrew's arms for a big hug (not sure why; I think it was because she remembered about the chocolate bunny that came in her basket): 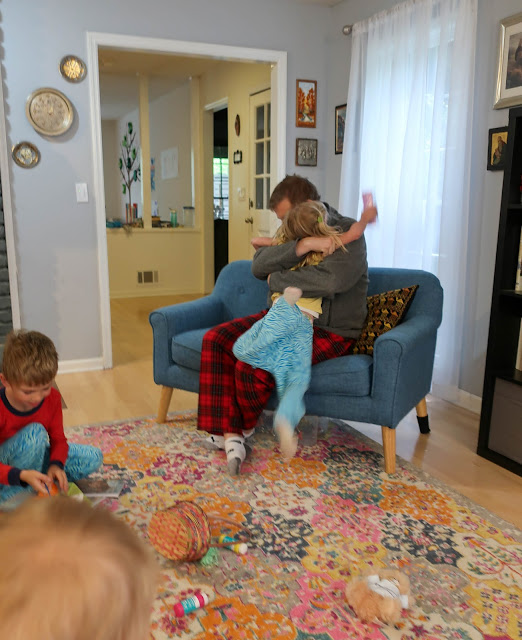 And here's Miriam reaching up to get one of the last eggs to be found (though in all honesty, there might still be more hidden around the room): 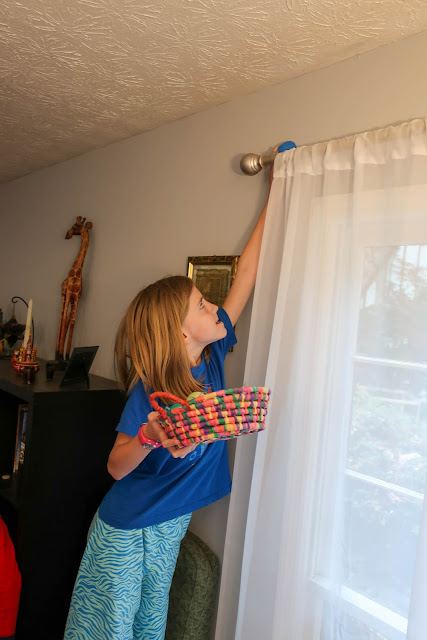