When we realized what day we'd hit 180 days of schooling—Tuesday, May 12—the kids quickly suggested we work extra hard the next couple of weeks and finish up on the 8th instead. Honestly, what are we even finishing? We finished our math and science curriculums weeks ago and I've just been cobbling together our language arts and social studies units so they're pretty flexible. We're still plugging along, though, reading The Adventures of Tom Sawyer, writing essays and working on vocabulary, doing daily math problems, and learning about pandemics (which is an easy way to work in both social studies and science). Anyway, since we decided to finish two days early we've been putting in extra long days—we were working on school work from 9–5 yesterday and about as long today—in order to cut those last two days out.

Pandia Press put out a pandemic study unit recently so we've been working our way through that. Today we read about The Black Plague and made some plague doctor masks, which the kids really enjoyed. I have no pictures from the actual construction since I was simultaneously using a hot glue gun and was acting as the bumper for Alexander's little roller coaster thing. It was...a lovely combination of activities. But after the kids traced and cut out pieces for their masks (except the littlest two, who needed more than a little help with the cutting) I helped get them assembled and then sent them outside to paint.

Here they are hard at work: 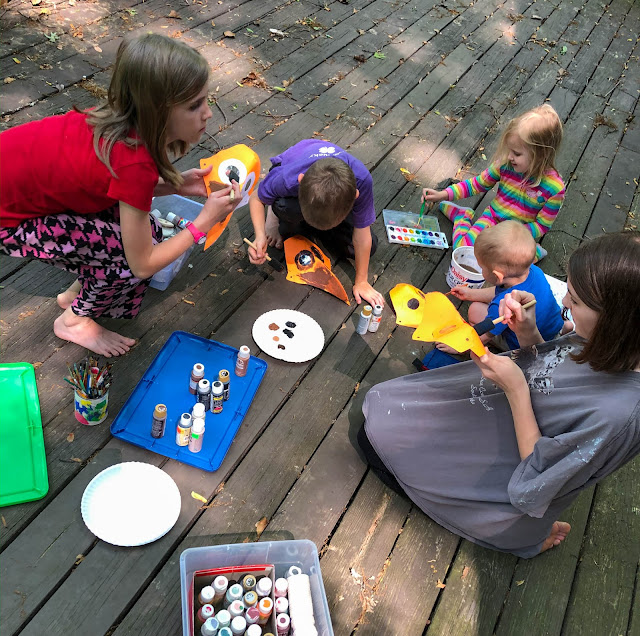 We didn't have any white card stock, so the kids mostly opted for orange. Zoë, however, chose pink and then she didn't want to paint her mask very much so she painted pictures instead. 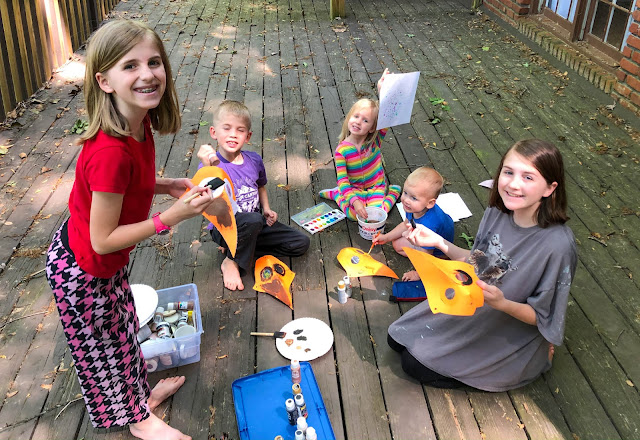 Here's a peek at the kids from the upstairs window before I escaped into the shower. I asked Andrew if it was crazy to leave them all out there painting and he said it would be just fine. There wasn't a whole lot they could ruin and if they did happen to do anything crazy it would be a "learning experience." So I left them out there painting... 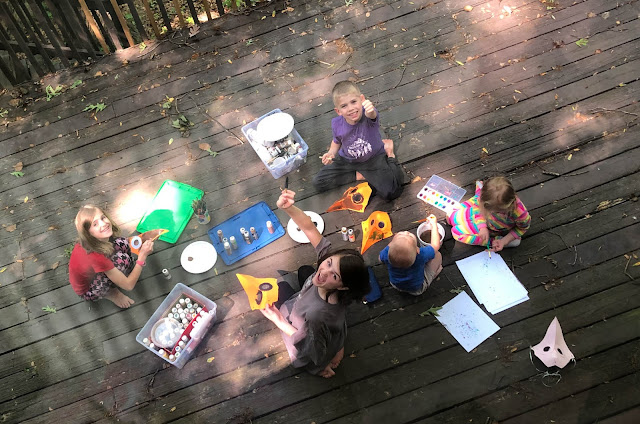 ...and when I came out of the shower I was greeted by this scene: 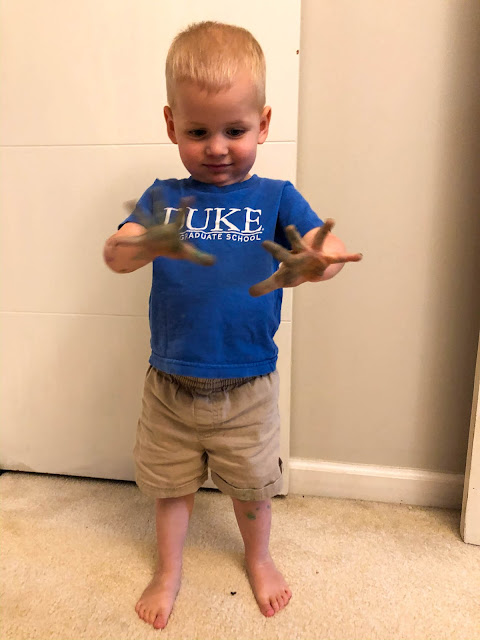 "I need help washing my hands," Alexander told me. "Because they are blue. Like my shirt is blue." 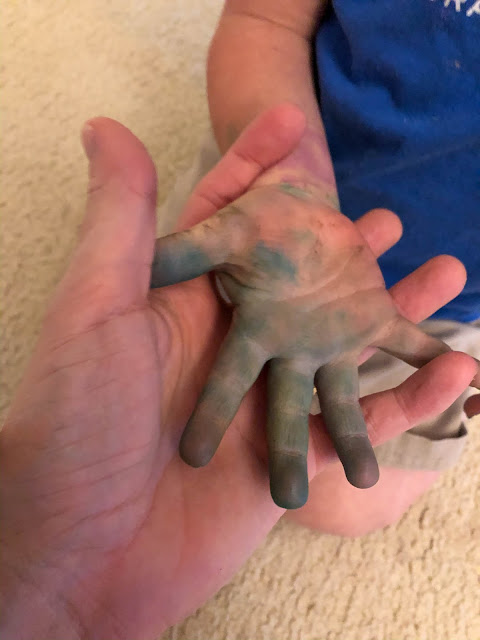 I helped him wash his hands and then went outside to check on the rest of the kids. Alexander, Zoë and Benjamin had all finished painting their masks but Rachel and Miriam were still hard at work on theirs. So here are the younger ones in their masks: 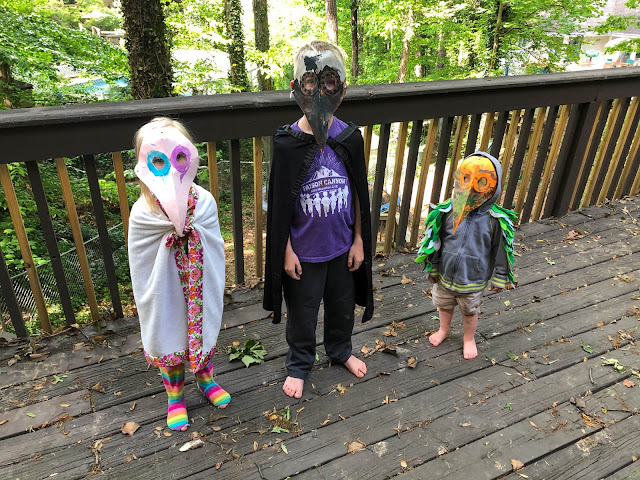 Benjamin was going for a fairly authentic look. Zoë said she's a fairy queen. Alexander, of course, is an owl. Those two littlest ones don't quite conjure up nightmares of The Black Plague, but they sure look cute in their masks. I guess. I mean, we kept telling them to "Smile!" and they kept saying, "You can't see our smiles!" Which...they have a point. 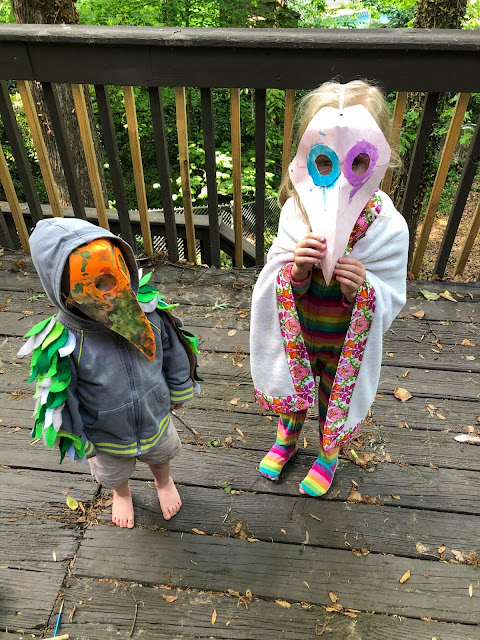 Here's Benjamin who said he was the Grim Reaper: 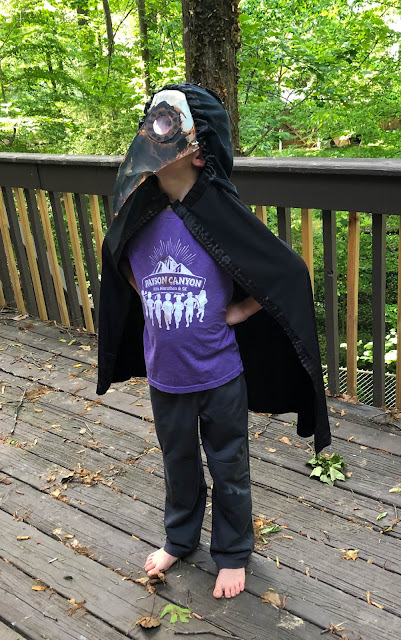 He even went to grab a little stick to carry around so he could poke bodies during his medical examinations (so as to avoid contamination). 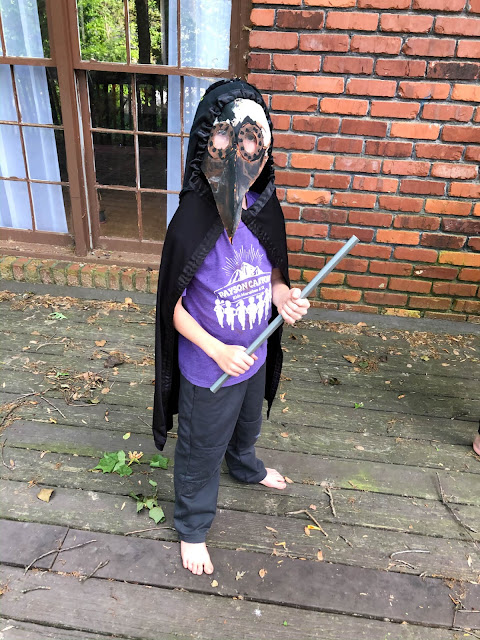 We kind of laugh at the idea of creating a bird mask to ward off "bad air," but honestly, I think they were on the right track. They basically created PPEs. None of their skin was exposed. And the masks were a good idea (and likely were pretty good barriers considering they were often made of leather). What I'm saying is that it was probably better protection than nothing. And, honestly, who's to say that in 600 years future civilization won't be looking back at our efforts and laughing at our scrambling efforts to produce homemade face masks. I mean, I'm sure we're also on the right track, but I'm also hoping the future will come up with some better solutions.

Perhaps future civilization will even find all those crazy pictures of people strapping orange peels and plastic bags to their faces and those will be the kind of thing to show up in text books instead of, you know, actual medical equipment (which will probably seem rather quaint 600 years down the line (at least we can hope it's that way (I recently finished reading Station Eleven, which was a pretty terrifying book to read in the middle of a pandemic))). History's got nothing on us. 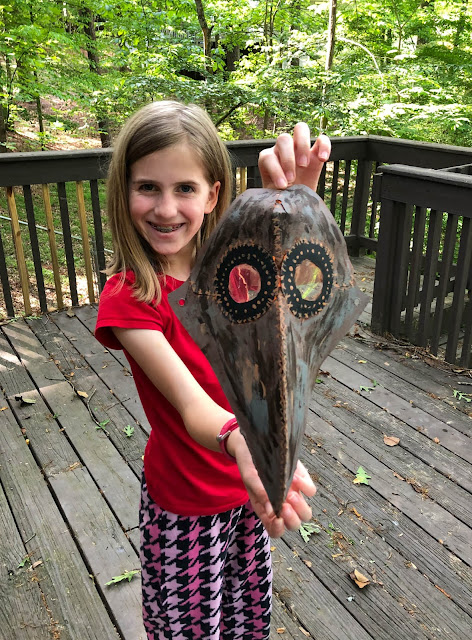 She ran inside to get a little black hat and shawl to wear with it. 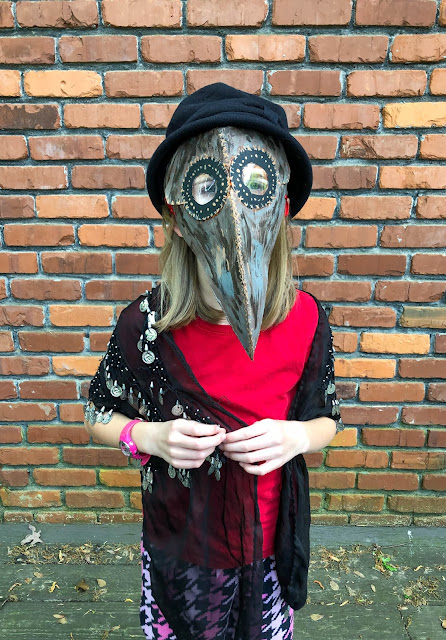 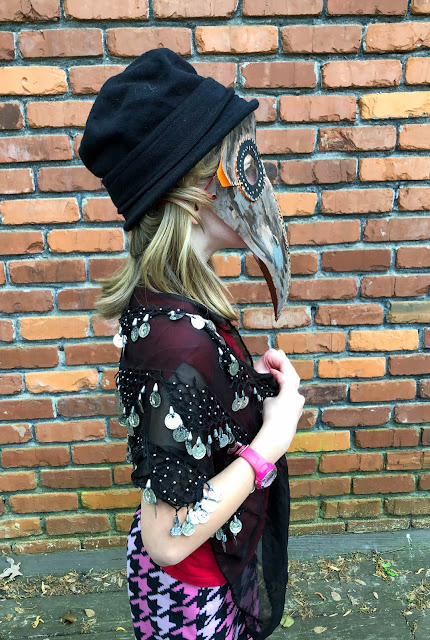 I'm not quite sure we managed to get the shape for these masks right; they should be pointed out a little bit more. But they're fit for their purpose (which is just for fun (well, that and for a memorable educational/artistic experience)), so it doesn't really matter if they're "right."

Here's Rachel in her mask: 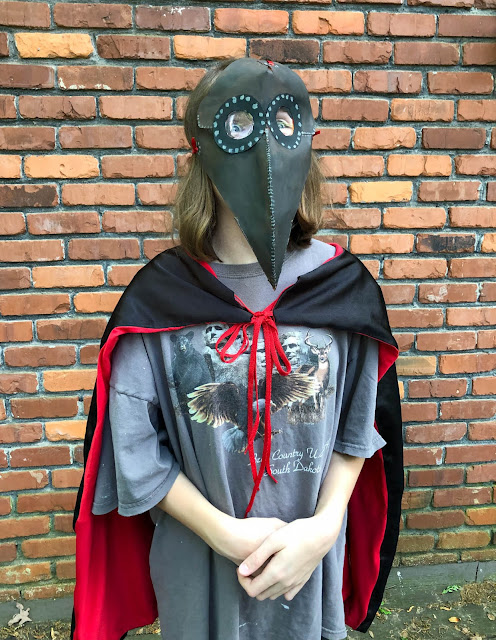 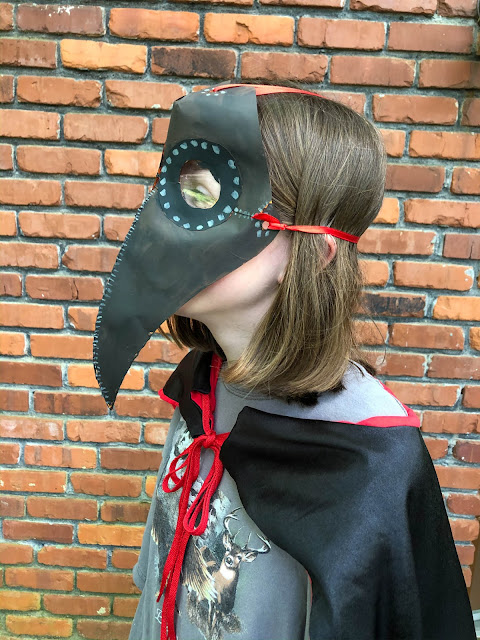 Here are all of the kids together: 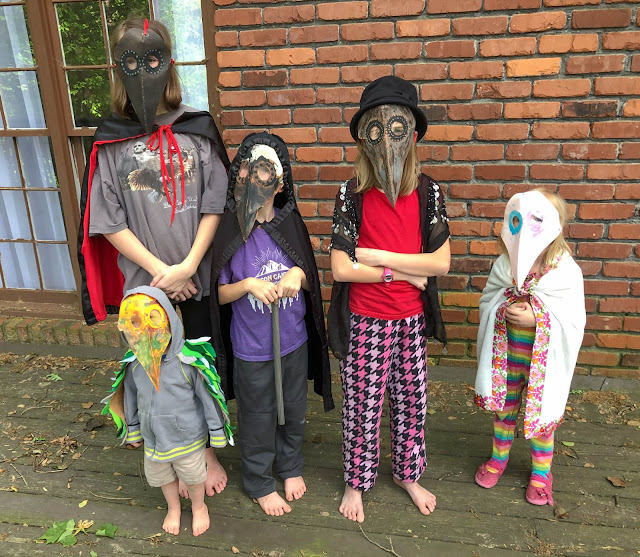 We decided the deck needed to be power washed after spending our afternoon frolicking about on it. I had Rachel blow it off this weekend and when it still looked messy I took a turn blowing it off, but some of that debris was caked on there, so Andrew broke out the power washer today. He and Rachel took turns washing off the deck (as well as the bricks, which you can see are getting a little mossy). By the time we were through with all our school work and painting and deck washing we were all so tired that no one wanted to make dinner (and we ate all of our leftovers (as well as some cold cereal) for dinner last night) so Andrew went to pick up some hamburgers.

Some of the big kids were talking about wanting Big Macs, so Alexander decided that he needed a Tiny Mac. While we cleaned up all of our schoolwork messes and got the table (and some broccoli) ready for dinner, Alexander chatted to me about his Tiny Mac, and when Andrew got home Alexander cheered and ran to the door. "Daddy! Did you brought my Tiny Mac?"

That boy is obsessed with all things tiny.

In fact, Daddy did "brought" him a Tiny Mac. Daddy brought food for everyone...except for Benjamin. Somehow Benjamin's sandwich had failed to make it into our bag, and he was a little upset about it but he ended up getting "The Sandwich Sampler," with about half of Alexander's burger ("Here, we'll make your tiny burger even tinier!" Andrew told him), a quarter of my chicken sandwich, a quarter of Andrew's burger, and Zoë's neglected chicken nuggets. So things actually worked out pretty well for Benjamin in the end.

After dinner Rachel "went" to her Young Women Activity (in her room; they had a "zoom" meeting and played charades together) while the rest of us went on a walk...wearing plague doctor masks...which is a perfectly normal thing to do, I assure you. What isn't normal these days? 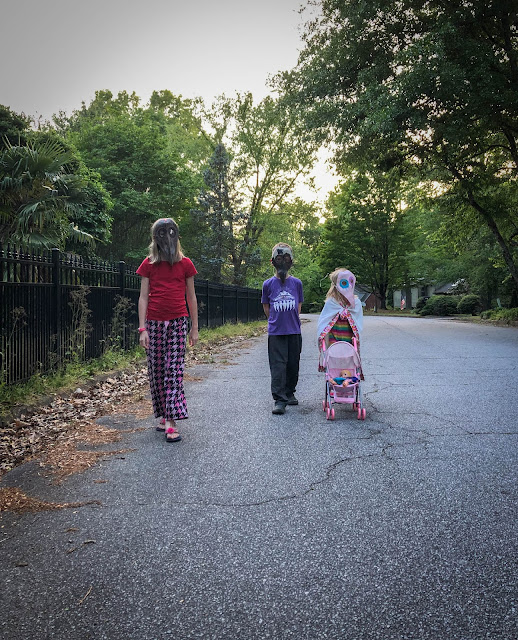 We didn't see many people, but we did get a few chuckles from the few people we did see. One neighbour even called out, "You kids look awfully scary!" which was the one compliment Benjamin had hoped to receive so his evening was made. 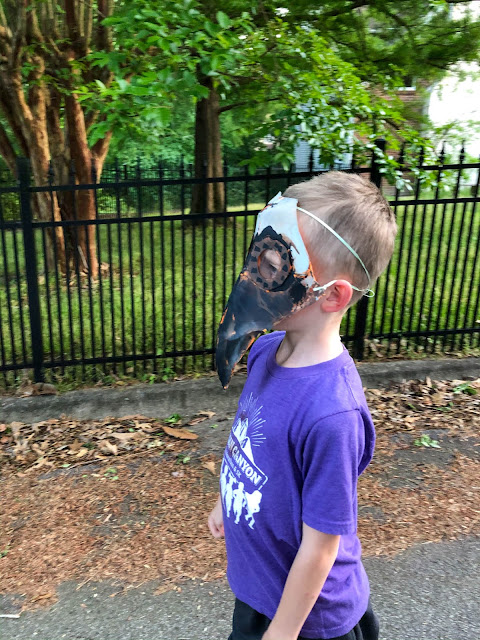 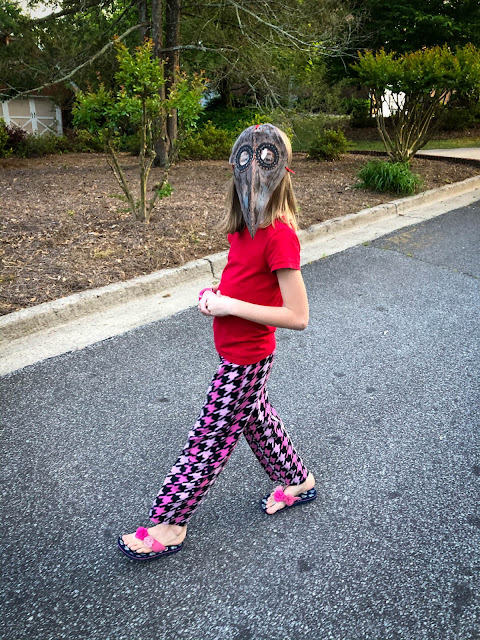 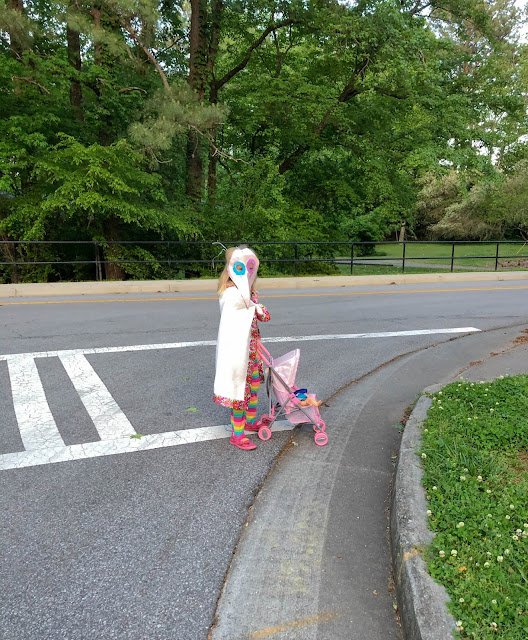 Zoë and Benjamin were both very excited to hide in the bushes to scare me with their masks on. 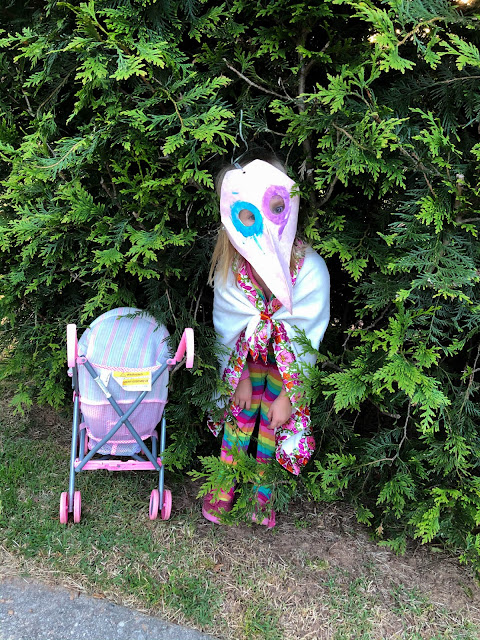 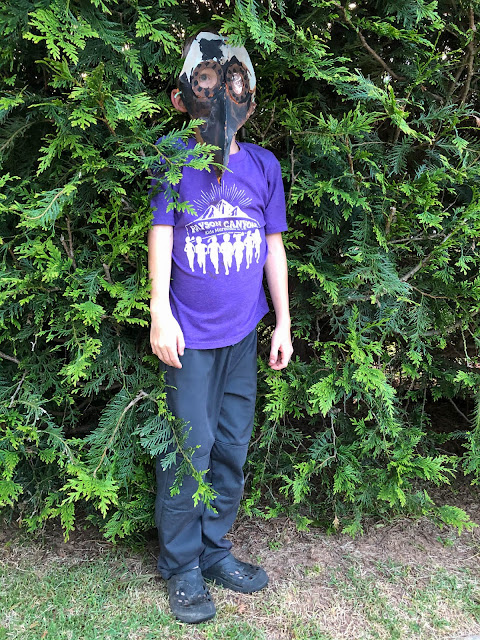 Here we are just about home: 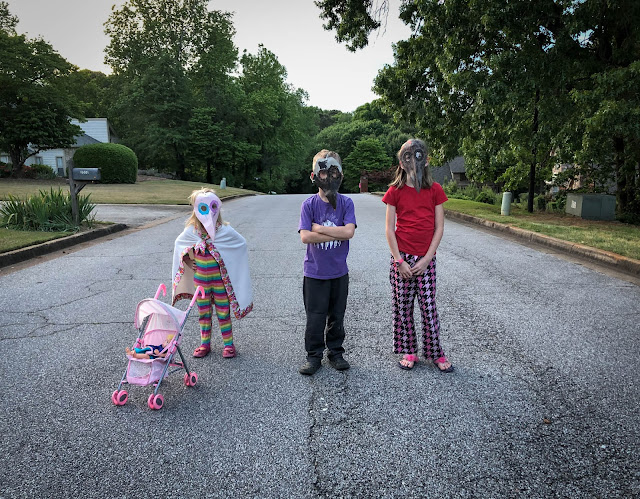 Hopefully this will at least be a memorable activity for the kids. We could learn about pandemics forever; there are so many free units about pandemics making the rounds right now. But that's not all! I've seen so many lists of so many free resources circulating. It's been kind of somewhat of a boon to me as I've been (loosely) planning what next year is going to look like for our little homeschool. 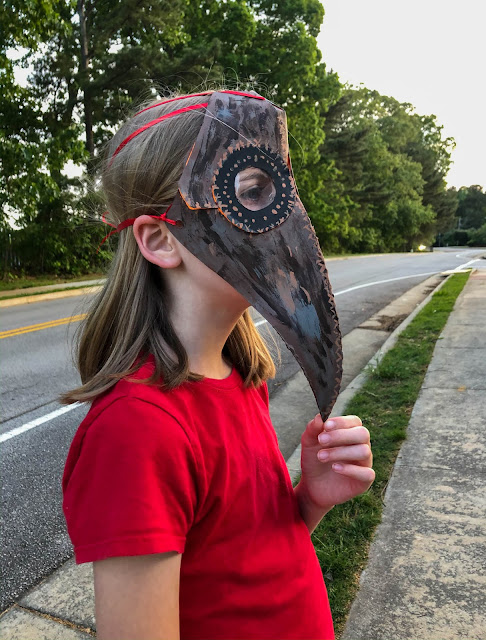