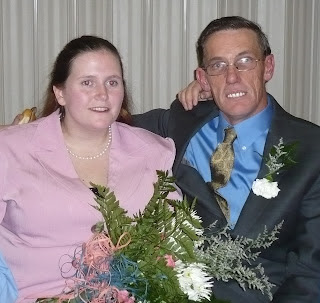 Kelli's wedding was a whole lot of fun. The ceremony was a little crazy with her twins not wanting to sit down, but it was over with soon enough. The bishop told them to save some money for a rainy day, to attend their church meetings, and to heed The Family: A Proclamation to the World. He read some key paragraphs from the proclamation, they said their "I dos," exchanged rings and then we headed into the cultural hall for some dancing.
Andrew went around taking pictures while I helped in the kitchen, what little I could with Rachel, and danced with David. Andrew danced with me a little bit, but for the most part he was the cameraman.

Rachel was a very happy baby the whole evening. She went to almost anyone freely and sang along to all the songs while she danced with each partner in turn. She loves dancing and had a great time doing a little boogie-woogie with Daddy. She was squealing and laughing and stomping her feet. Occasionally she'd lift up her feet and twist her hips around, dangling from Daddy's arms. 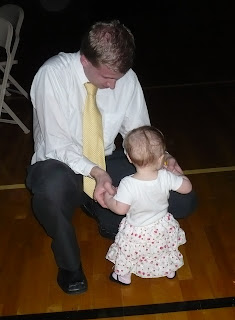 Uncle Kevin was the DJ and at one point he came on the mic and dedicated a song to Kelli and David--their song, specifically--and asked them to dance for everyone. When he was done talking, Kelli and David walked out onto the floor and waited for their song to play. They were all ready in dance position when a hideous punk rap song started blaring through the speakers. A little confused, they started trying to slow dance to the noise. After a few seconds Uncle Kevin got back on the mic. Obviously he had the wrong song. He put the right song on, which was much better suited to a slow dance. 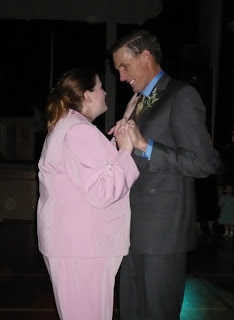 Dad gave them the toast--and literally a piece of toast. After handing them the toast he explained that it was free of butter, jam, and all else so that they could spread their love on it; that he only gave them one piece because here on out they would have to share. He also wished for them that their love be like a rose. Currently it's a bed of roses, but the petals will soon fall off and all they will be left with is thorns. If they are patient, though, and wait through the winter, the roses will bloom again.

I'm really happy that my sister has found someone to be with. In fact, she found lots of someones to be with...
The Haggard Bunch 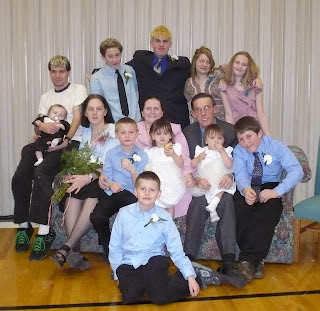 It's the story of a lovely lady, who was bringing up 3 girls and 2 sweet boys. All of them had sweet dimples, like their mother. The youngest were a joy.
Here's the story, of a man named Haggard, who was busy with 5 children of his own. There were 6 of them living all together, but they were all alone.
Till the one day when the lady met this fellow and they knew it was much more than a hunch that this group would somehow form a family.

That's the way they became the Haggard Bunch!*

*Kelli wrote this parody of the Brady Bunch theme song, and then I edited it because I wanted parts of it to rhyme that weren't rhyming before.
Posted by Nancy at 11:46 AM