Most of my time the past few days has been devoted to baking cakes. I'm in the middle of trying to make a wedding cake for my sister and it has been an interesting experience. I'm just glad that I didn't embark on this project on Thursday night. That would have been disastrous.

Of the first three layers I baked, two crumbled when I tried to take them out of the pan. I had already used up three boxes of white cake mix from our food storage (no, I am not making her cake from scratch; yes, we have cake mix in our food storage). We didn't have much of a selection left and I already had one nice layer of white cake already baked. Since we had just gone grocery shopping we knew that cake mix was on sale at Macey's. We decided we would buy some more. (Somehow I spaced the fact that I would be making a colossal cake this week while we were out shopping. Oh, well.)

Andrew went to write that up on our white board, along with Crisco since I had tried greasing the pans with butter and that was an utter failure. He was just finishing up the O in Crisco when I started reading over his shoulder.

"What does that say?" I asked. 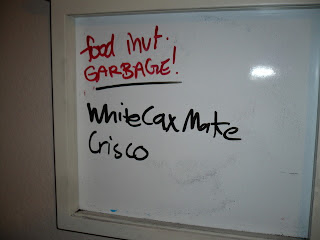 "I know that says white," I teased him, "What does the rest say?"

"White Ca..." he started, but couldn't get the rest out because he was laughing so hard.

White Cax Make--I've never seen that on a shopping list before. Not only could Andrew's penmanship rival President Grant's for illegibility, he was writing completely nonsense words.

Of course, my handwriting is not much better. I can write nicely...I just often choose not to employ my skills. Especially when I'm in a rush and/or I don't care about the finished product.

We usually make our "list of things to do" right before we go to bed at night. I add things during the day and erase others as our plan changes, but the white board still keeps me on task...even though some things stay on the list for days and days and days. When that happens I usually will just erase the whole board and start over.

You'll notice that "food inventory" is still on the board...and if you look at the first picture "garbage" is underlined and followed with an exclamation mark.

Anyway, this is the list we made last night. We were being a little silly...and truthfully I didn't finish one thing on this list, although I should have. I did do some laundry. I did eat. I thought about playgroup but didn't do anything about it. I didn't do my visiting teaching but I called my companion and asked her to make appointments this month. And the last one...is a long story. 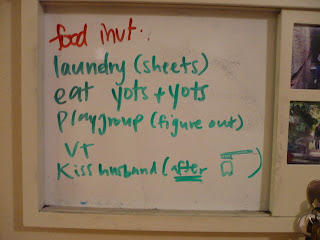 I asked him what he was talking about and he pointed to the white board.

"I thought it said, 'Kill husband' instead of 'Kiss husband,"" he explained, "But I remember now. That's a picture of a tooth being brushed, not an axe hanging over a head."

I did get my own way, though, because he eventually did brush his teeth and then came to beg for his kiss. You'd be amazed at the leverage I can get from a kiss. Sometimes I think that he acts stubborn just to get a rise out of me.

He asked me last night, affecting the tone a five year old takes uses with their seven year old sibling, why he should do what I say--things like brushing his teeth. I said,

"I did. Because I'm the boss of everything. It doesn't matter whether or not you said I could be the boss because you're not the boss. I am."

"You're the boss of everything?" he said, feigning sadness.

"Can't I be the boss of anything?" he asked using his puppy dog eyes.

"No." I said firmly, but then I got a wicked grin on my face. A brilliant idea was brewing, "Actually, you can."

"Really?" he asked, with mock excitement.

"Sure," I insisted, "You can be the boss of taking out the garbage and cleaning the toilet and changing the diapers and washing the dishes and mopping the floors and..."

His laughter cut me off. I soon joined him and not too long after that we were both shushing each other and trying to stifle our laughter for fear of waking up the baby. We laugh so often it is the one thing we can leave off our "to do" list.
Posted by Nancy at 12:41 AM