Almost mobile, but not quite

Zoë's not quite mobile yet but she's starting to get keen on the idea. She can roll from side to side, just not over, and she pivots on her little play mat, running around in little circles while still laying down, kind of like Homer Simpson here:

Basically, if I put her down and walk away for a minute I never find her quite where I put her.

Last night I caught her purposely playing for the first time! She rolled to her side and squirmed around until she caught one of her toys. Then she batted it around and pulled it up to her mouth to suck on it. She was having a lovely time! 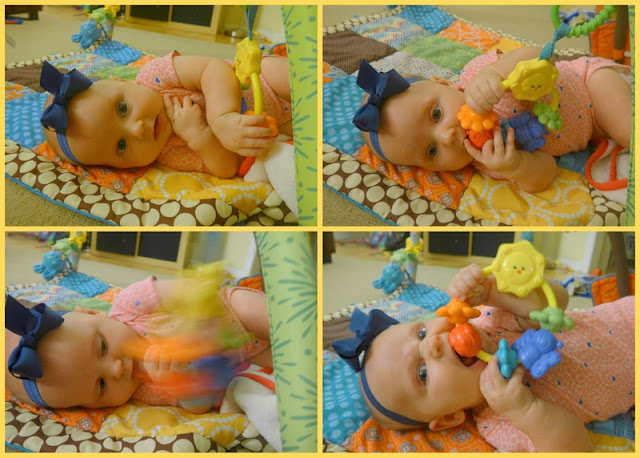 Before dinner she was sitting in her bouncy chair and Benjamin was rocking her gently, which was fine, but then he said, "I'm going to rock her harder!" and started really making that chair move.

But when I looked over she was smiling at him. I still made him stop because her head is still way too big for her little neck to support fully...but she was having fun.

She's growing up right before our eyes! Part of me is sad because I want my snuggle buddy back (she actually enjoys floor time now so doesn't want to be held all the time) but another part of me thinks it will be really nice when she can entertain herself for a while because then, perhaps, I'll get a few more things done around here...
Posted by Nancy at 8:48 PM