I've been a little stressed out (that might be an understatement) about the talk I'm supposed to give on Sunday but it's finally coming together so I feel like I can take a break and write about something else for a while.

After the girls got home from school we headed to the pool because it's Friday so there was no homework to worry about. Yippee! It's starting to cool down already—some trees are even deciding it's full-on autumn and are dropping their leaves—so that means the pool is, too. By no means is the pool cold; it's simply not as warm as it has been. By the end of summer my kids have been conditioned to believe that outdoor pools should feel like taking a nice, warm bath, so by the end of August, when the pool's likely warmer than it is in the beginning of May, the kids aren't so sure about getting in, even though they're totally game when it comes to swimming in cold water in May.

Anyway, it took a little while for them to get in, but once they were in they had fun. We haven't gone for a while because Miriam had swimmer's ear and Benjamin had croup, but I think we're all just about healthy again (thank goodness).

I was sitting on the side nursing Zoë before getting in when Miriam started screaming that a fly had landed on Benjamin. Sometimes we're pestered by horseflies at the pool—and horsefly bites are no laughing matter!

"A dragonfly?" I repeated. "Are you sure it's not a horsefly?"

By this time, Benjamin had frantically paddled over to the side of the pool and was freaking out.

He turned around and there, indeed, was a dragonfly just hanging out on his head.

"Oh, it is just a dragonfly," I said. "It's nothing to worry about. Dragonflies don't hurt people."

Though in her defense dragonfly sounds a lot scarier than horsefly...

We left it there because having a dragonfly resting on your head is kind of cool. It stayed on his head for several more minutes—right up until he attempted a back float. 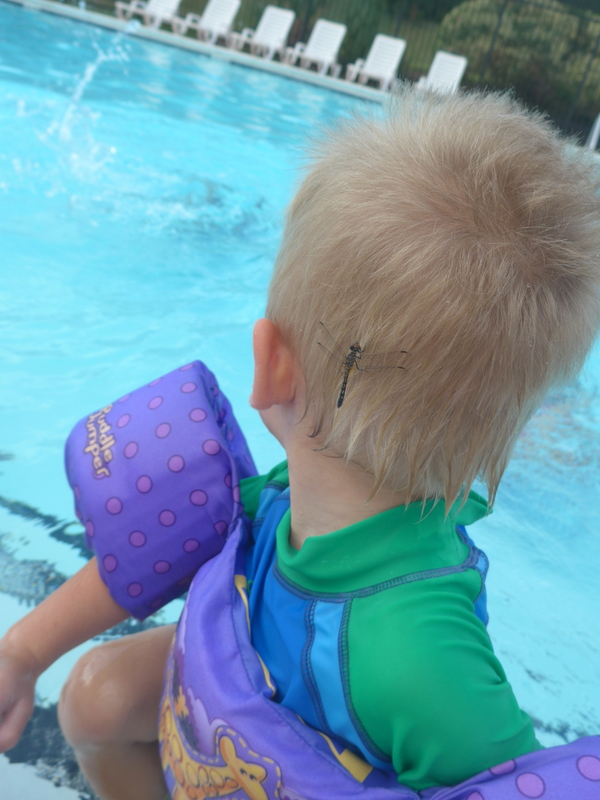 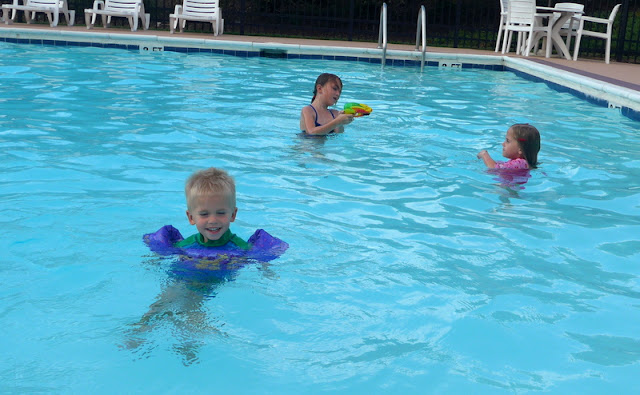 Before leaving we warmed up in the baby pool. It doesn't take the sun as long to heat it up because it's so shallow so it gets nice and warm even on cooler summer days like we've been having lately. 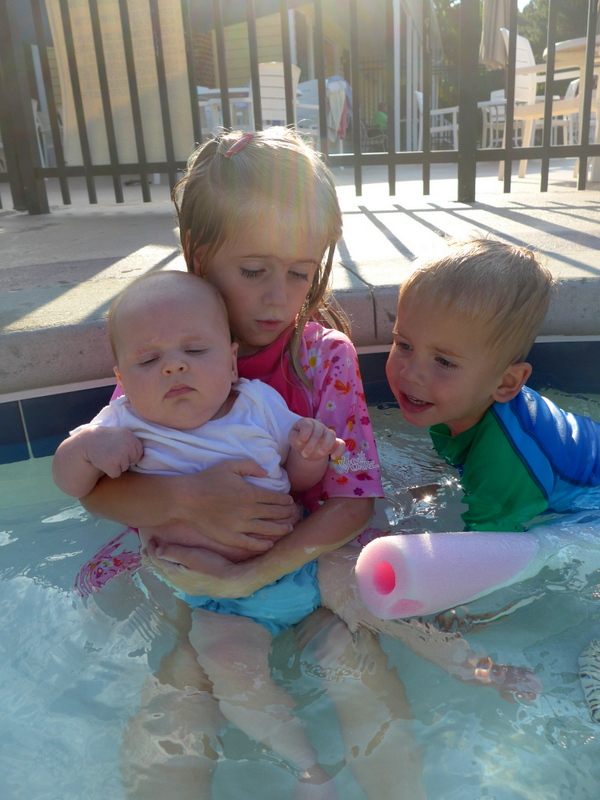 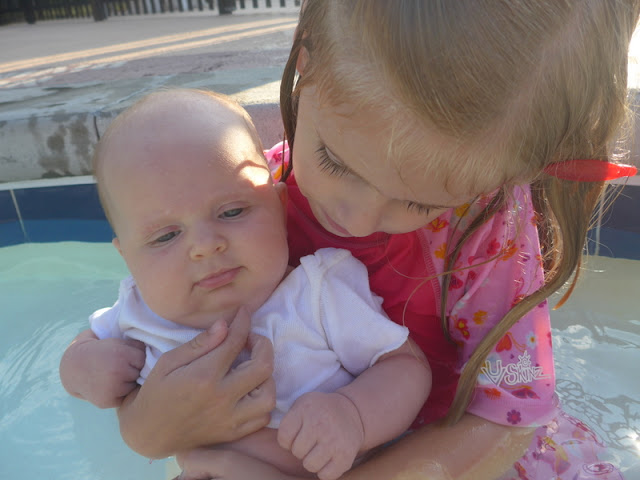 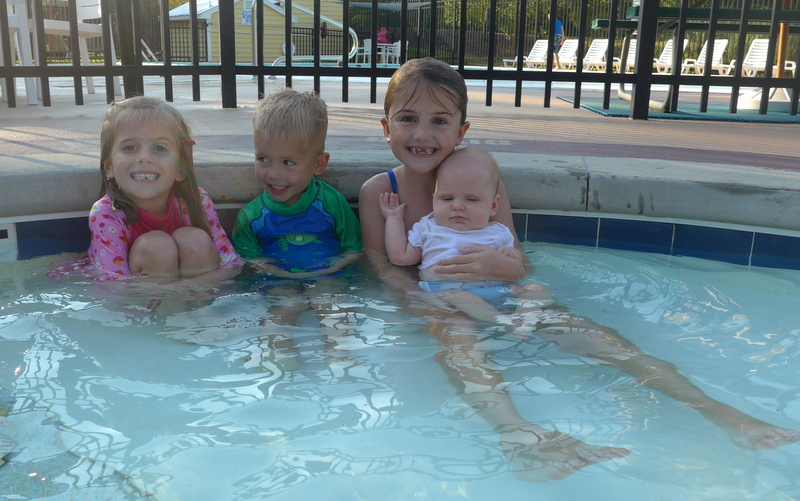 Rachel is such a good helper with Zoë. It's rather nice. Miriam helps, too, but she's a little less capable at five than Rachel is at eight (for obvious reasons) and sometimes she makes me a little nervous; for example, when Benjamin bumps her and she loses her balance while holding the baby in the wading pool...like so: 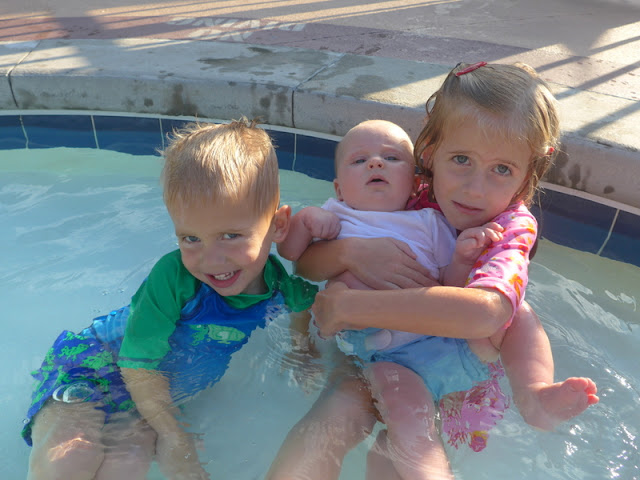 But Rachel's much more capable and confident and she loves helping take care of Zoë. It's been so nice to have a little mother's helper this time around. Instead of having to maintain my sanity all the way until Daddy comes home I only have to wait for relief until Rachel comes home. The very first thing she's requested every time she's walked into the house for the past six weeks is, "Can I hold the baby?" And then I can pass off the baby while I do "that thing" Benjamin's inevitably pestering me about (get me a snack, read me this book, find me that toy, hold me now). She's just great! 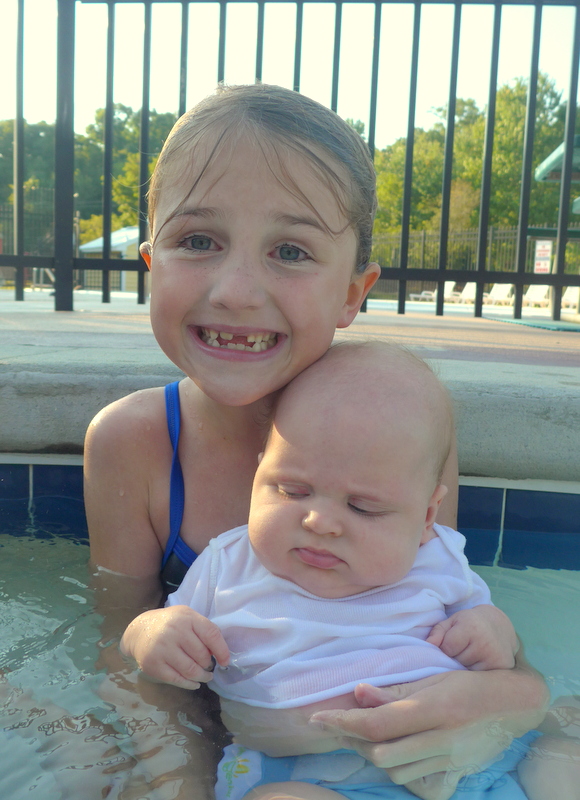 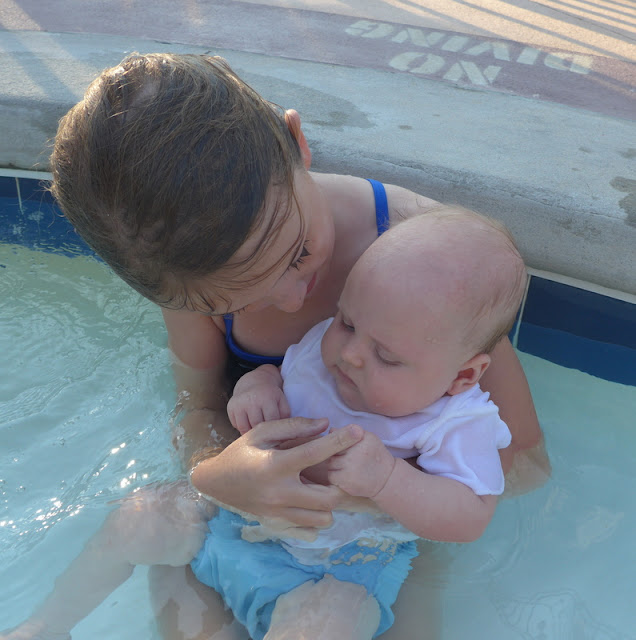 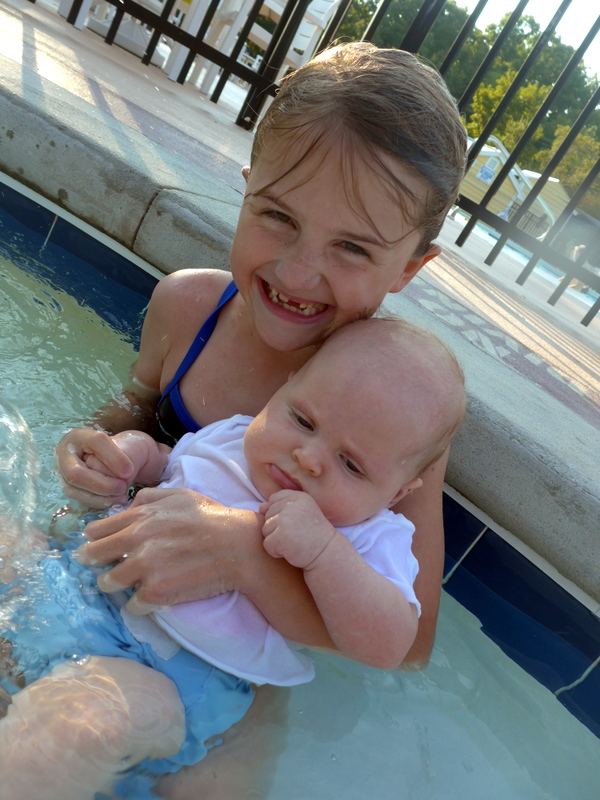 While we were at the pool, Andrew arrived home and started making dinner for us. He barbecued some hot dogs and hamburgers and made home fries. Dinner looked pretty well put together by the time we arrived home, but while we were hanging up towels and things Andrew went to get something out of the freezer—he can't remember what—and when he opened the door a package of hamburger fell out. I heard it clatter to the floor and out of the corner of my eye watched as Andrew said, "Oops," and stooped to pick it up.

I stepped outside to hang up some more wet stuff and immediately heard *crack*boom*smash*thud!*

I hurried back inside and found Andrew lying on the kitchen floor groaning and holding his head while frozen food rolled all around him.

"I don't know," he moaned. "I dropped the hamburger and when I bent down to pick it up something heavy fell on my head and..."

That something heavy was about a gallon of a well-intentioned, yet-to-be-used freezer meal from one of my visiting teachers. And then a box of taquitos. And then a bag of frozen vegetables. And then a freezie or two, just to add insult to injury. The freezer was pelting him with frozen goods as he lie on the floor in agony. Poor guy!

Here's Zoë saying, "What was that racket?" 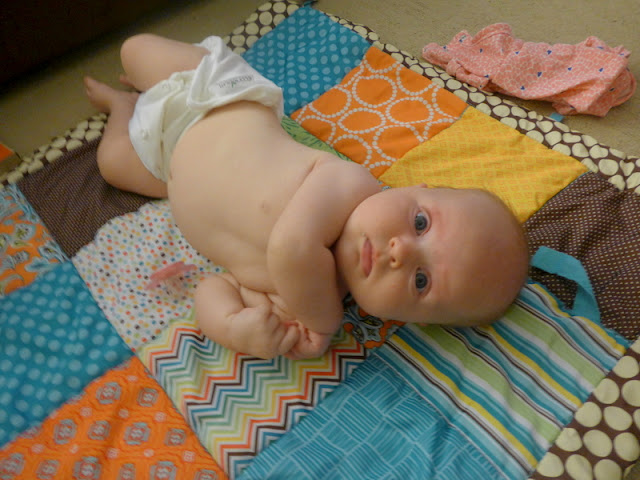 I put the freezer back together and made Andrew "let me see" and we finished getting dinner on the table. Andrew got the home fries out of the oven and set it on the table...a little too close to the plastic bag the hot dog buns were in, melting it open.

Later in the evening we started making baked beans for tomorrow's pig picking and he turned the wrong burner on...and about twenty minutes later was wondering why the pot wasn't boiling yet!

It was an incident-filled evening, that's for sure (and a late one, too, because he's been working on so many books for the Maxwell institute lately (and I was working on this talk that I've been stressing over for a couple of weeks now))!

Our comic relief was when Benjamin claimed the pickle juice as his beverage for his meal.

"Sure!" Andrew said after hesitating for a minute.

"Mmmm! That's good!" he said, pushing his water cup away and placing the jar in its place at the top of his plate. No reaction other than satisfaction from this boy; he didn't pucker his face or shudder or anything. He actually enjoyed it. 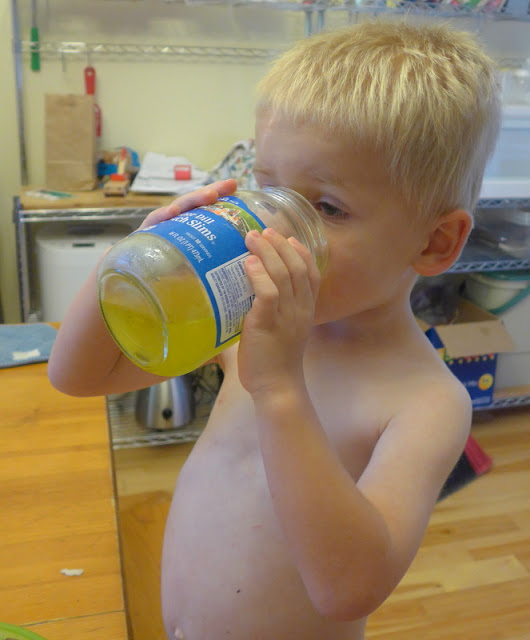 He also likes to drink olive juice (like the water from canned olives), which I think is way worse than pickle juice! Still, I don't think he drank too much because the jar was still pretty full when we cleared the table.
Posted by Nancy at 1:38 AM