I took the little ones to the park yesterday morning. Benjamin's been up with croup—coughing and crying—every night since Saturday and yet he somehow manages to bound of bed in the morning and play all day with seemingly endless energy resources. It seems a little unfair!

Rachel had a lot of energy as a toddler/preschooler so I secretly enjoyed it when she came down with an illness because it would knock her out. She'd sleep. She'd rest quietly on the couch. She'd be quiet. She would ask for little and demand nothing.

Miriam was the opposite. She was a quiet, calm child, but when she was sick she was a lot of work. She was clingy and whiny and melodramatic about everything. I'd have to work hard to keep her happy when she was sick, so I was always grateful when she got better and we could get back to our regular routine. Of course, I was also always grateful when Rachel recovered from sicknesses...but her recovery meant more work for me, not less.

But Benjamin! Oh, man! He's a lot of work when he's healthy and when he's sick! In fact, he can be a little overwhelming—loud and energetic—when he's feeling healthy, but when he starts to feel sick he will kick things up a notch—be extra loud and energetic.

I don't know where he finds the reserves to do this.

Anyway, Andrew and I have been pulled from bed several times every night since Saturday to deal with either Zoë or Benjamin—changing diapers, filling humidifiers, nursing (that's just me), turning on lullabies and patting backs, and so on. But then the day is just a regular day.

"Don't you want to rest? You were up all night coughing and crying," I'll say to Benjamin.

"I seel sine!" he'll assure me with a croaky voice.

So I took them to the park yesterday morning shortly after the girls were off to school. It's nice and cool in the mornings lately, I feel like, so we walked there and played until nearly lunchtime.

I put Zoë in the swing and gave her some very gentle pushes (since she's really too small to be sitting in a bucket swing with that bobbly head of hers) and she seemed to really enjoy it. So I took a million pictures of her... 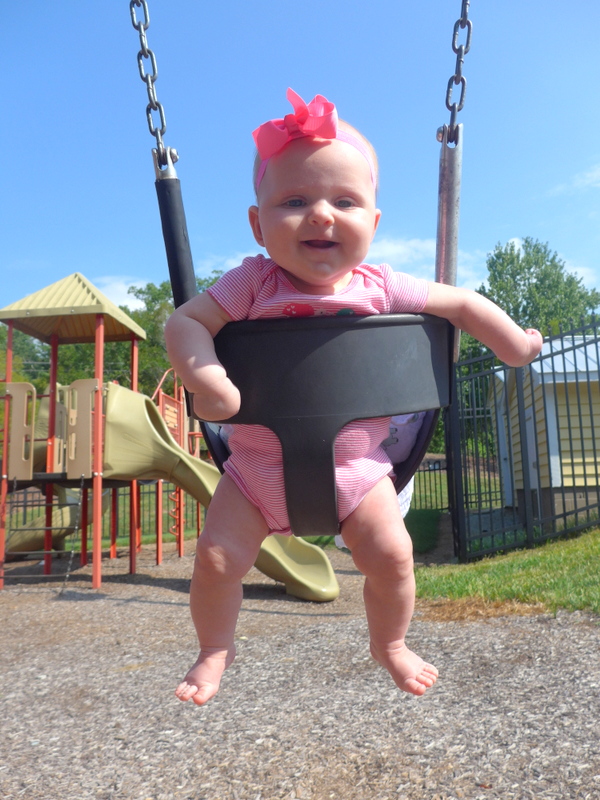 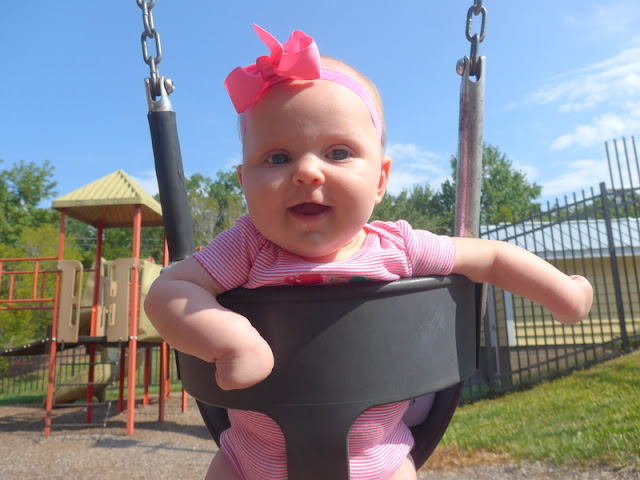 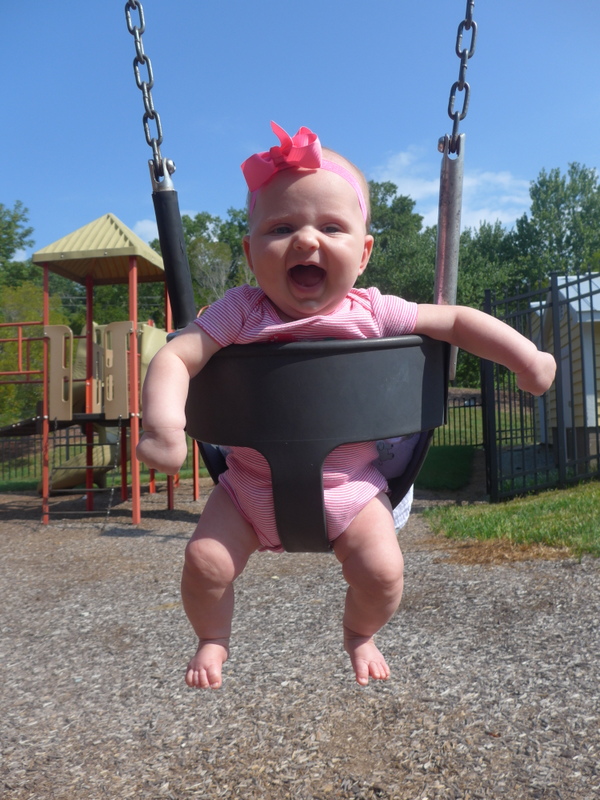 Benjamin, meanwhile, was stuck in the other baby swing so he couldn't do anything untoward. 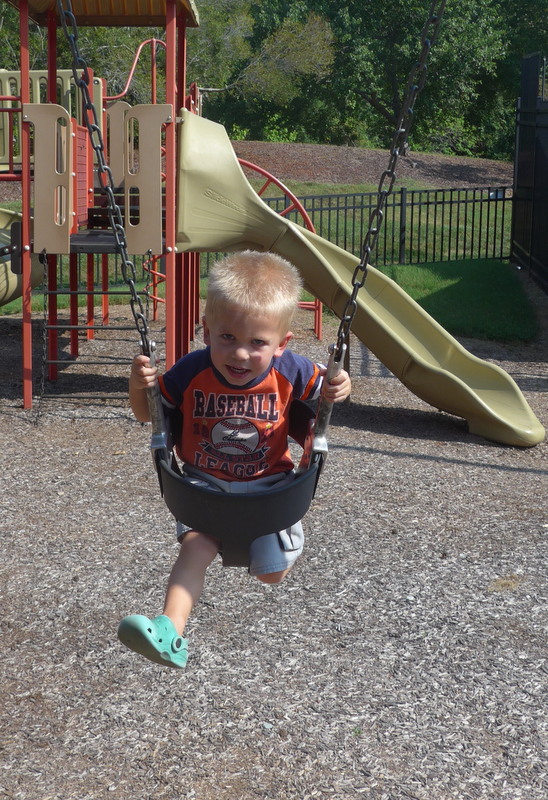 I let him down when he got so bored he was yelling and he surprised me by actually being gentle with Zoë. 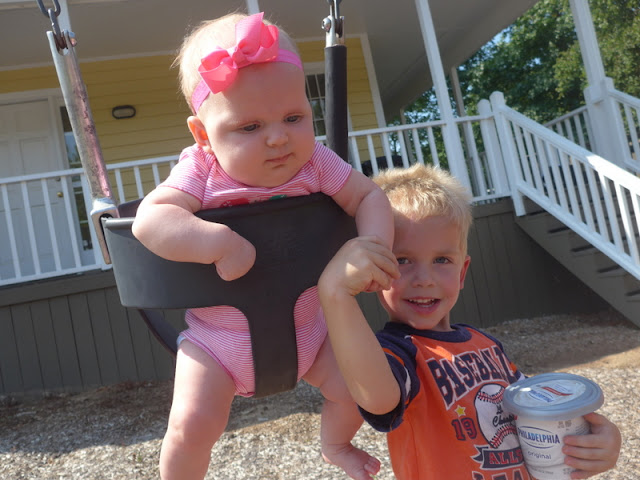 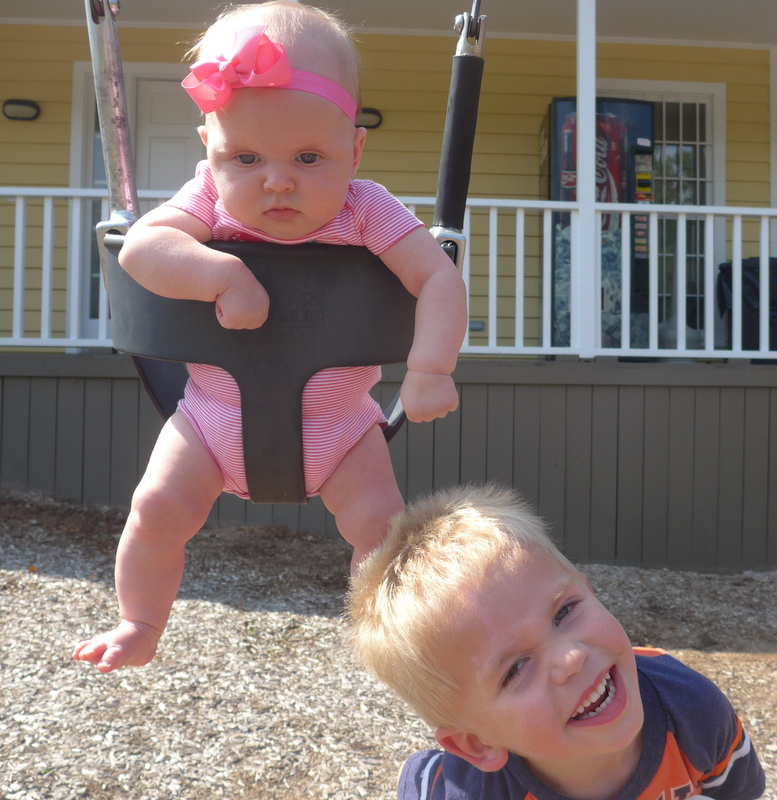 He smushed his face up against her arm and said, "Look! She loves me! She's patting my face!" 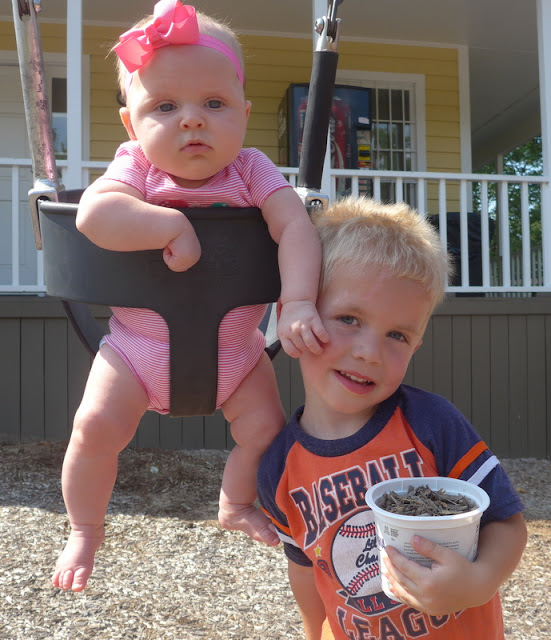 Benjamin's convinced that Zoë loves face-pats so he pats her face all the time. She loathes it. We've talked about the fact that she hates it and that her face is a hands-off zone but...Zoë loves it so he just can't stop. 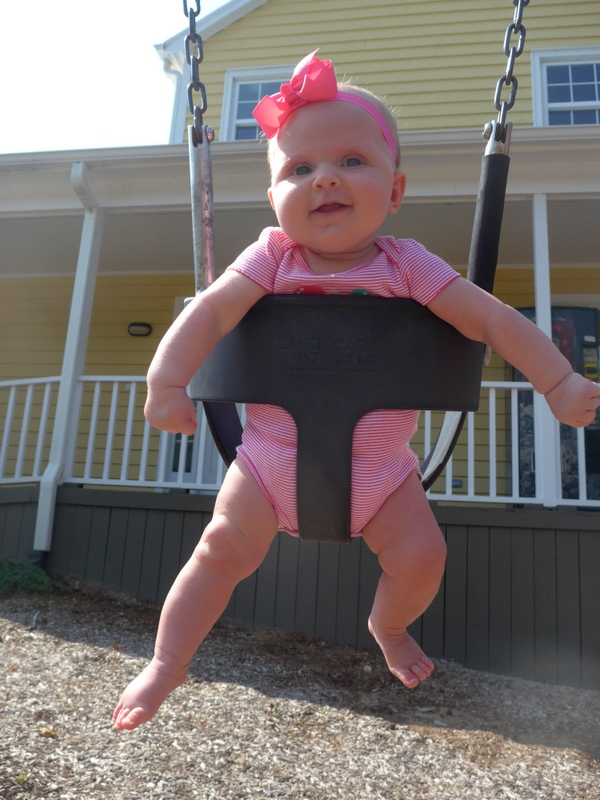 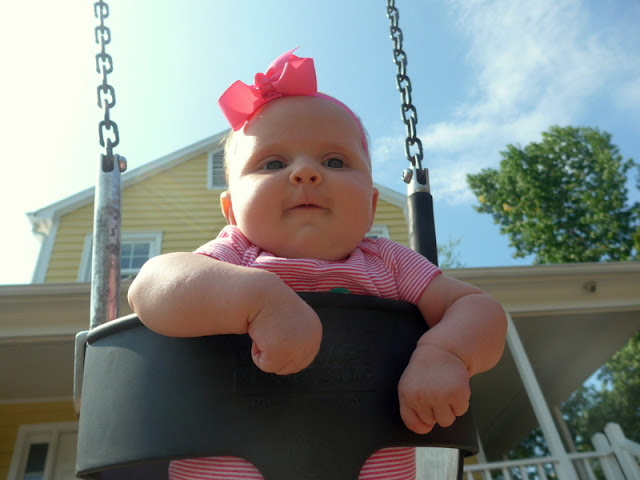 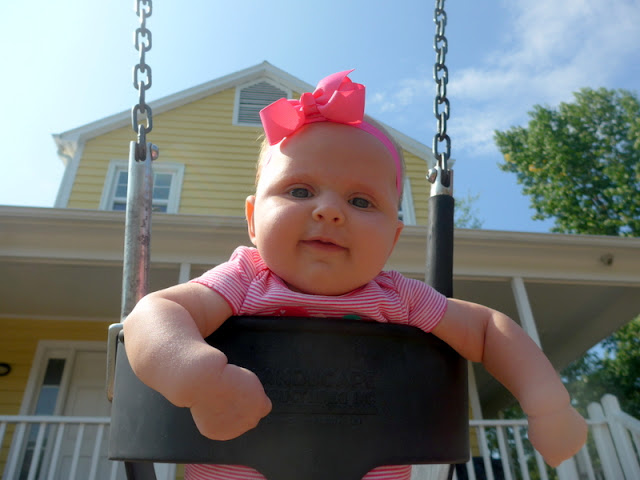 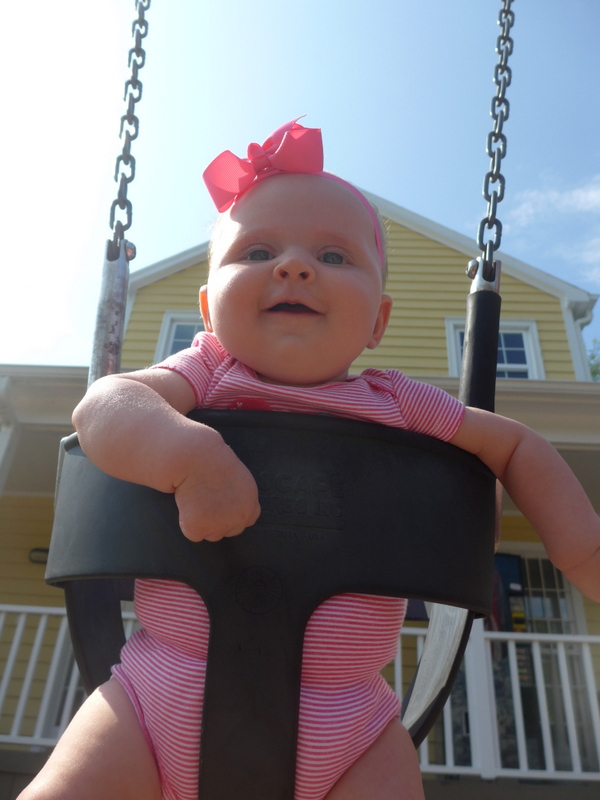 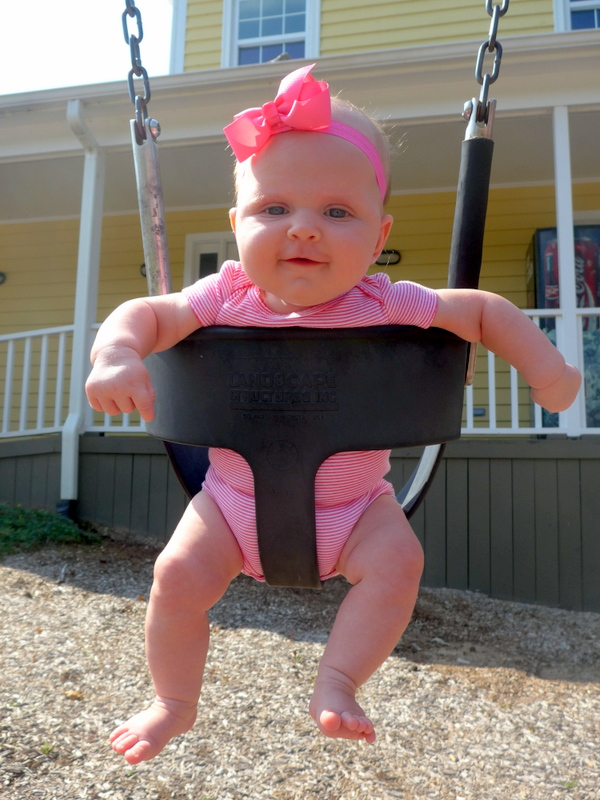 This is actually her getting really excited about Benjamin. She often isn't excited about him, but she'd been watching him climb on the playground for a few minutes so when he came back to see her she was thrilled. She started kicking her legs and shriek-laughing at him. 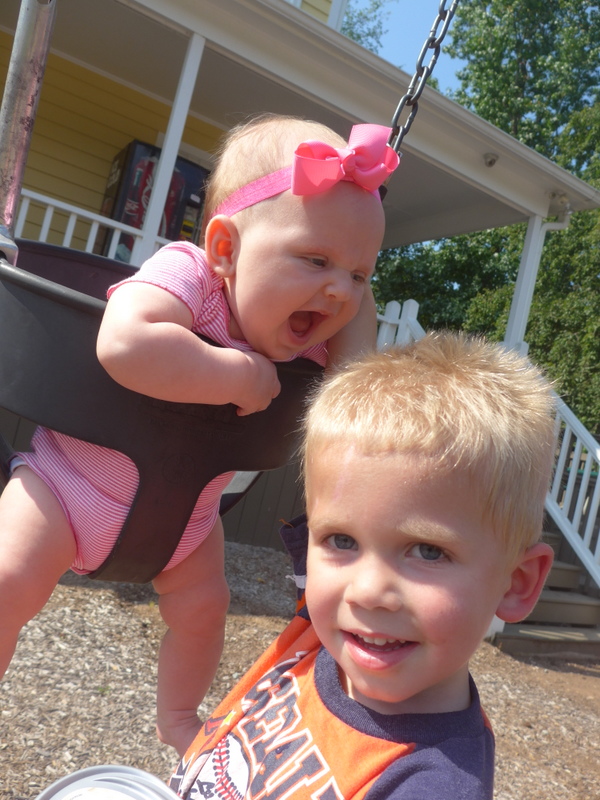 It was a fun morning, though I felt a little bad in the evening when I was getting Zoë ready for bed and I noticed she had a stripe around her head even though I'd taken her headband off hours before (it usually leaves a light mark on her head for a few minutes after I take it off). It took me a minute to realize that the poor little dear had a sunburn! She really was only in the sun for the few minutes she was in the swing; I did my best to keep her in the shade but apparently those few minutes were all it took. She'll has a permanent headband mark on her head for the next few days.
Posted by Nancy at 3:22 PM