Rachel's birthday party was a smashing success. For our gathering activity we had the kids make their own sonic screwdriver pen (inspired here), using a regular ballpoint pen and polymer clay. Andrew was quite worried about sticking pens into the oven until I started removing the ink chambers from all the pens.

It was kind of nice doing an older-kid party because all our guests were pretty self-sufficient. I only had to help Benjamin. 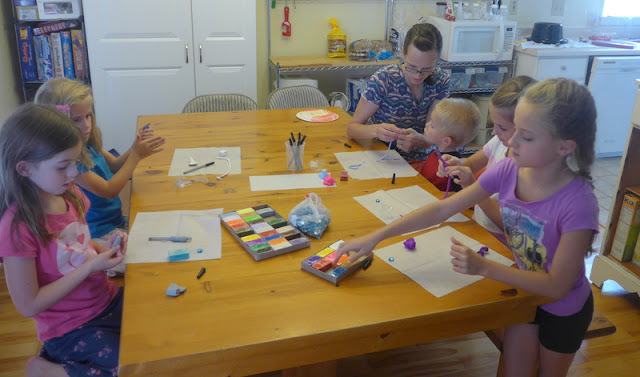 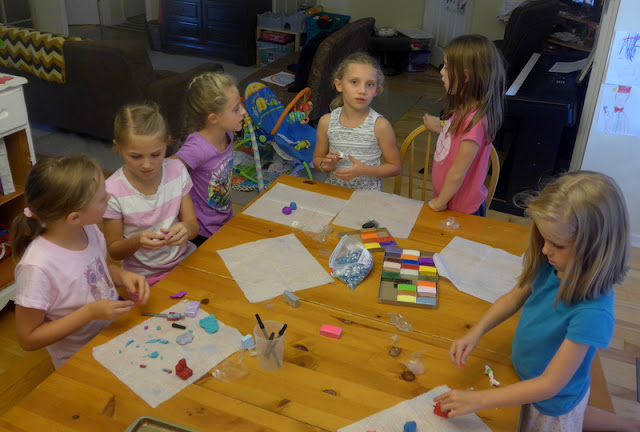 Here are our sonic screwdrivers fresh from the oven (Benjamin's is the fourth from the left, then comes Rachel's with the big teal buttons, and next is Miriam's, a red, white, and blue affair): 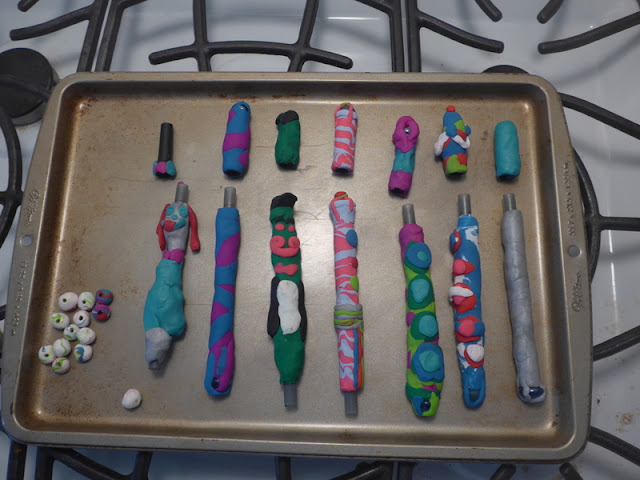 Once they were cooled we put the ink chambers back in and put the lids back on. In the meantime we played a few games. First up was pin-the-bowtie-on-The-Doctor. I drew the poster and Rachel and Miriam coloured it. It looks nothing like The Doctor even though I did my best to copy this picture, which does look like The Doctor. 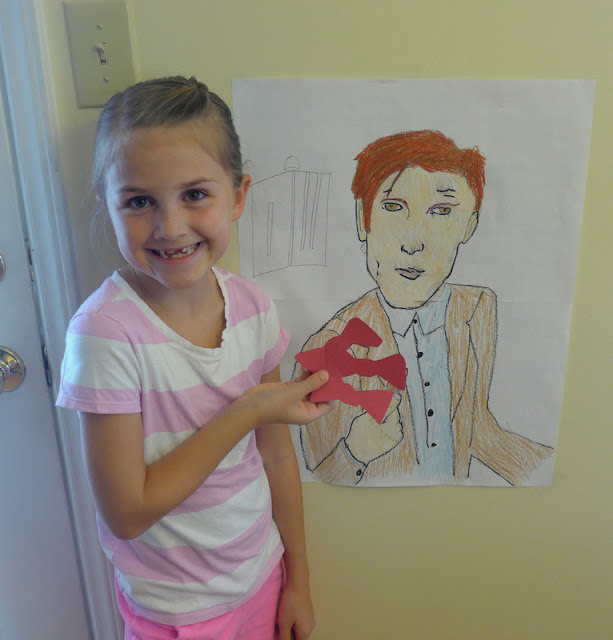 Andrew assured me that it at least looked like a person—more of a Lord Farquad than a Doctor, but a person nonetheless.

Saying "I can't..." is frowned upon at our house. Whenever the girls say, "I can't [blank]," we encourage them to say, "[Blank] is hard/boring/whatever for me right now but with enough practice/time/hard work it will become easier and more enjoyable/I will get better at it." Something along those lines.

That might sound lame, but that's what we do. But now I was caught saying those words—"I can't."

"Mom," Miriam said encouragingly. "You might not be able to draw great people right now, but you can draw a great peacock. I've seen you! And if you can draw a peacock, with enough practice you can draw people."

Inspirational, I tell you. There's nothing like a good speech to rally one's spirit, is there?

Anyway, here are a few pictures of the kids playing pin-the-bowtie... 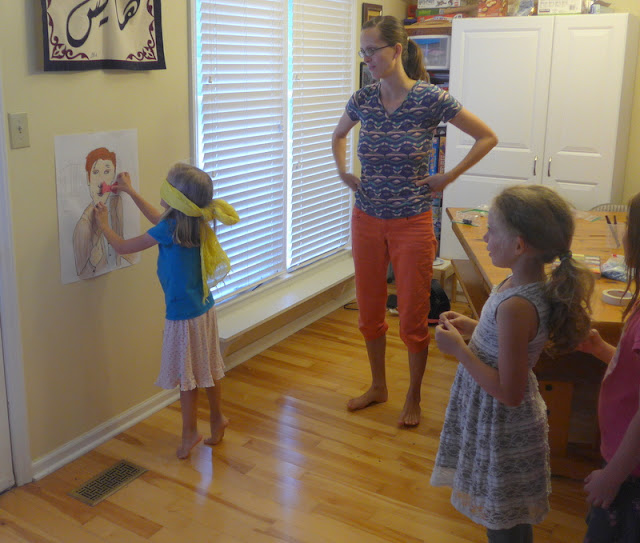 We were going to have Benjamin go first (we had the kids line up from shortest to tallest) but he kind of flipped out when I put the blindfold on him. Miriam went first to show him how it was done and then he watched a handful of guests go before he finally decided he was brave enough to take his turn. 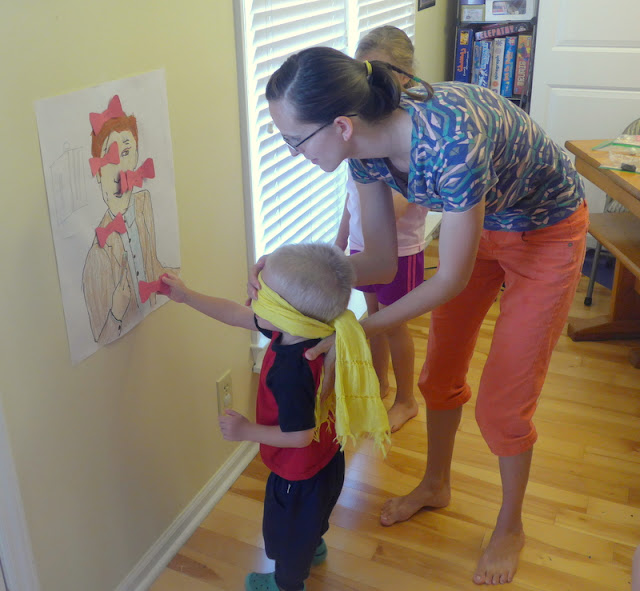 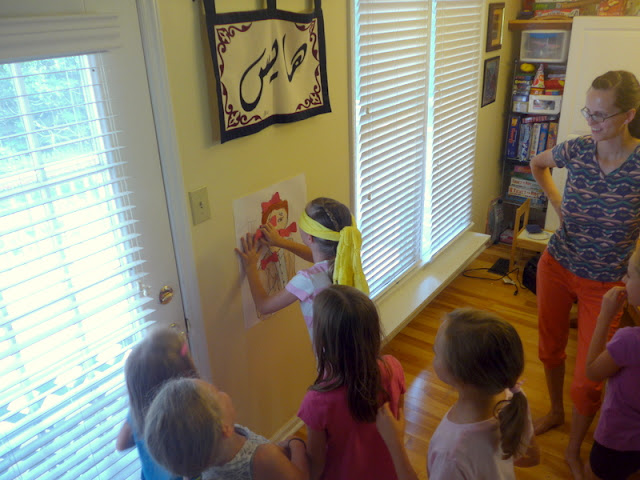 And here's how the poor doctor ended up: 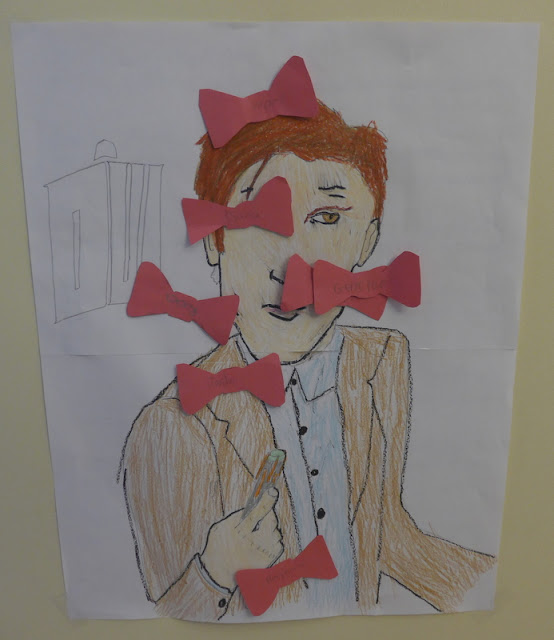 We shooed the kids outside after this and let them run around wild for a few minutes before lining them up again to break the piñata. They were chasing each other all around the yard and Benjamin climbed into the TARDIS to hide. He was pulling the doors shut on himself when the TARDIS tipped over right onto the doors he'd just pulled shut, effectively trapping him inside the box. Everyone else found it incredibly humorous, but he did not. He was screaming for help. Andrew ran down the stairs to rescue the poor boy.

You can see his little hands on the TARDIS doors here (this picture was taken just before he tumbled): 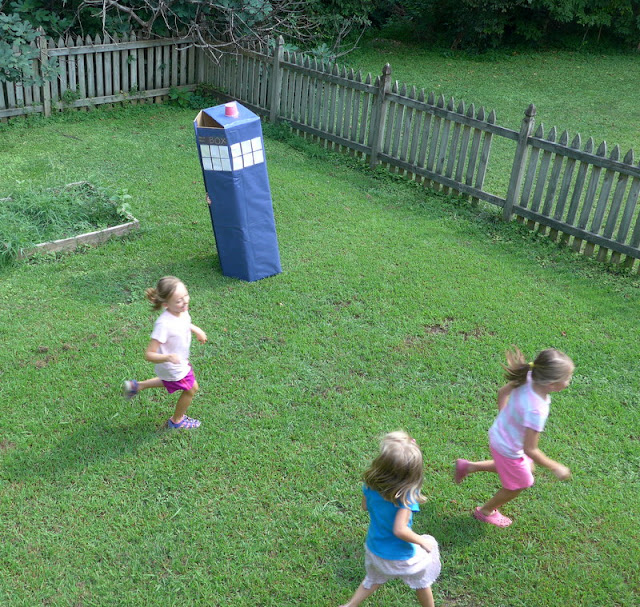 Here's Rachel with all her friends—and Miriam, who I think is also her friend (at least most of the time, which is lovely): 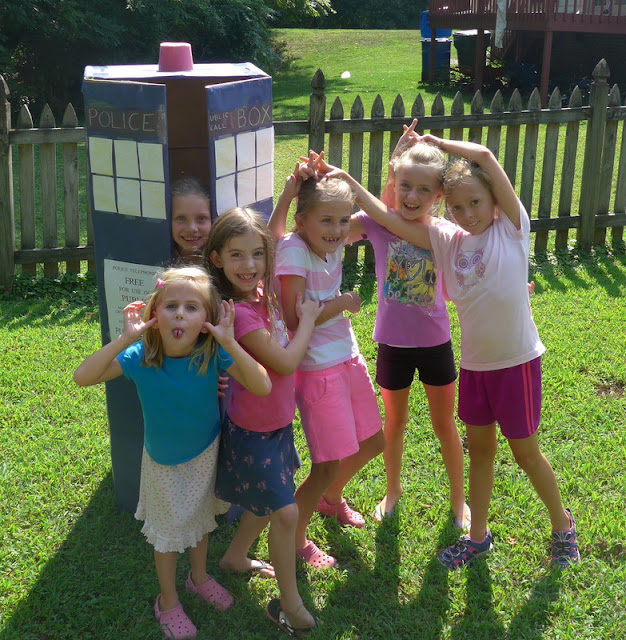 Our piñata turned out rather silly looking. It's just a box, a paper towel tube, and a little plastic cup, all covered in tin foil and taped together in a shape similar to a Dalek. We then covered it in blue circles for good measure. I figured it didn't have to be perfect if kids were just going to beat on it with a stick. 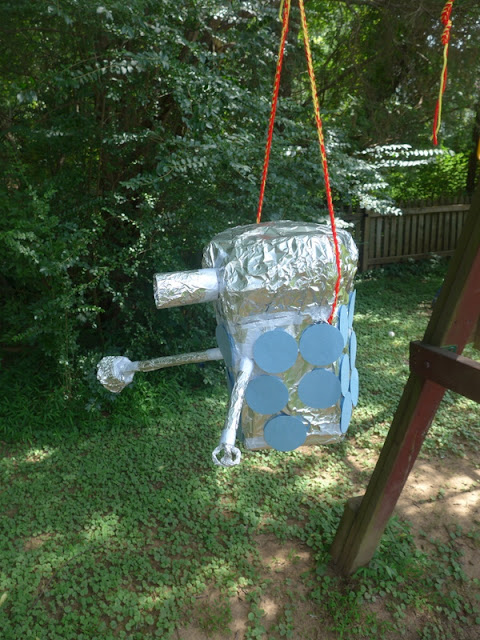 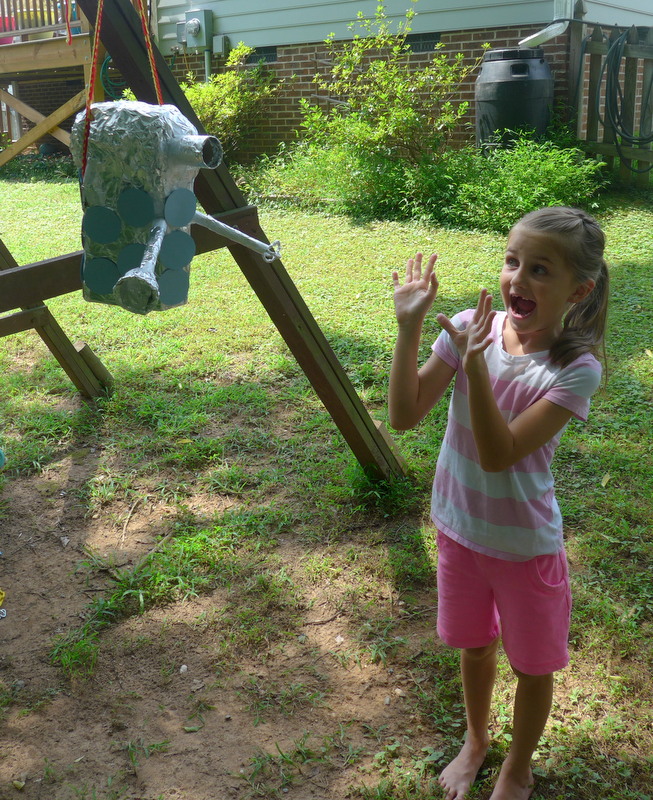 On the first go around we let everyone swing until they'd hit it just once or twice before moving on to the next person. I wanted to make sure everyone had at least one turn to hit it and I wasn't sure how well it would hold up. It held up surprisingly well.

Here's Rachel taking her first turn. She hit it with her first swing and on her second swing she hit herself on the leg...hard. 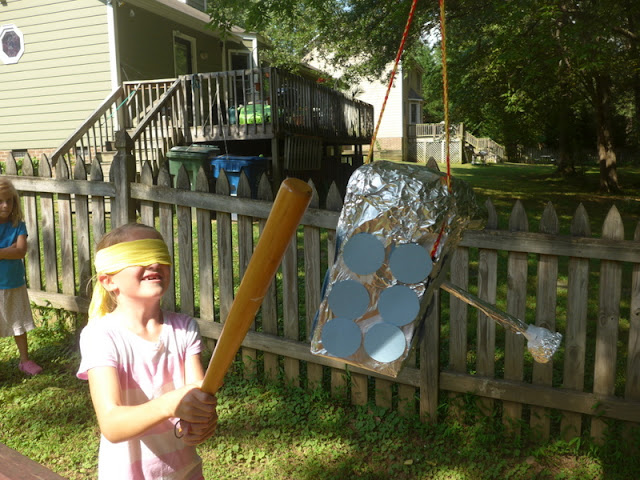 She was the only child to hit herself though, so...that's...good...right?

Miriam took things super seriously. She was concentrating so hard! Here she is removing her blindfold after her first hit: 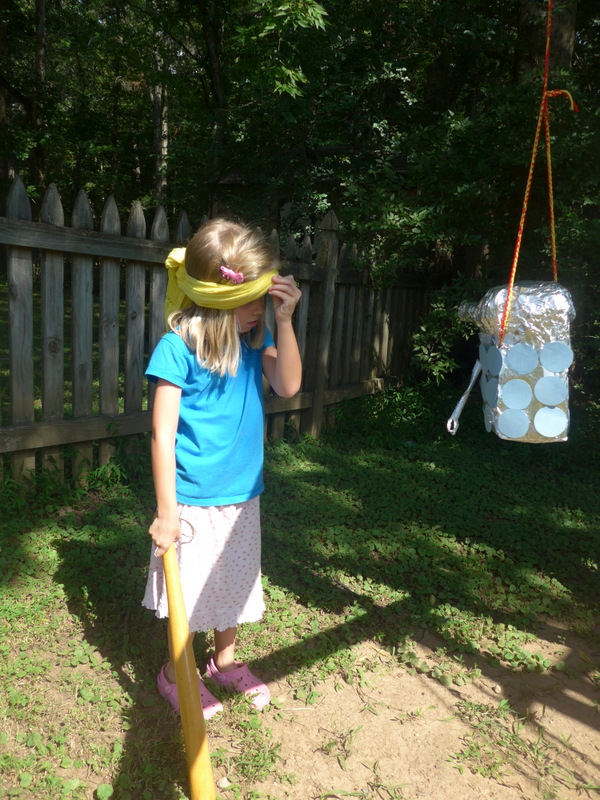 And here's Rachel bashing off one of the Dalek's arms: 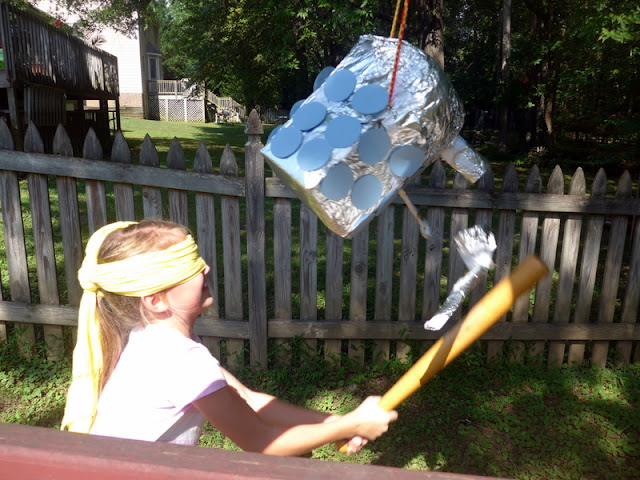 Andrew's job was to dance the piñata up and down to make things more difficult for the kids. He seemed to enjoy this task. And no one hit him with the bat (that's definitely good). 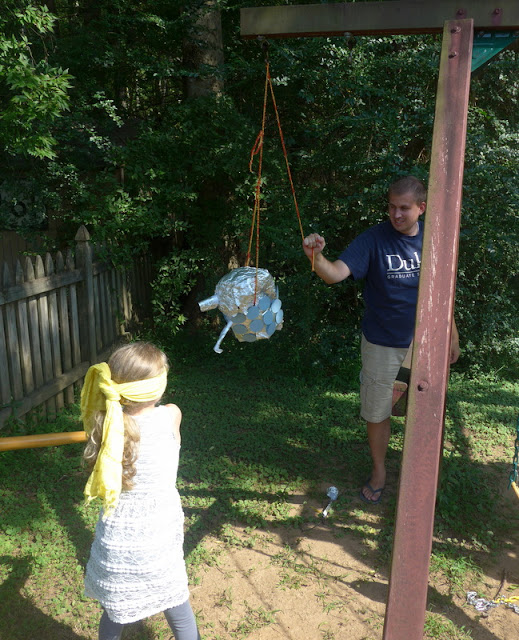 Benjamin didn't want to play at all, which was surprising because it's a game where participants are encouraged to hit with a sticks (a pastime Benjamin is usually keen about). I guess the blindfold was a little off-putting and I suppose we could have given him a turn without the blindfold on but he was happy to swing on the sidelines while the girls took turns whacking the living daylights out of this Dalek.

When it broke open, Benjamin screamed, "STOP! Stop the swing! I want to get off! Stop! There's candy! Stop!"

He wanted to be sure he got to gather his fair share of candy even if he didn't do any work to break the piñata open.

When we were telling Grandma and Grandpa about it over Skype he told them all about how we "broke the box and candy flew everywhere." It was very exciting.

By this time the sonic screwdrivers had cooked and were cooled and reassembled. We handed them out and the kids played Doctor Who until it was time for dinner. 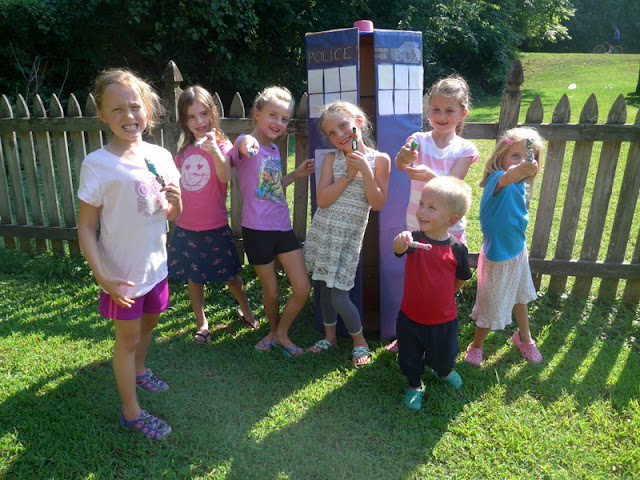 Sweet Baby Zo slept the entire afternoon, pretty much, hiding from all the noise, I think. 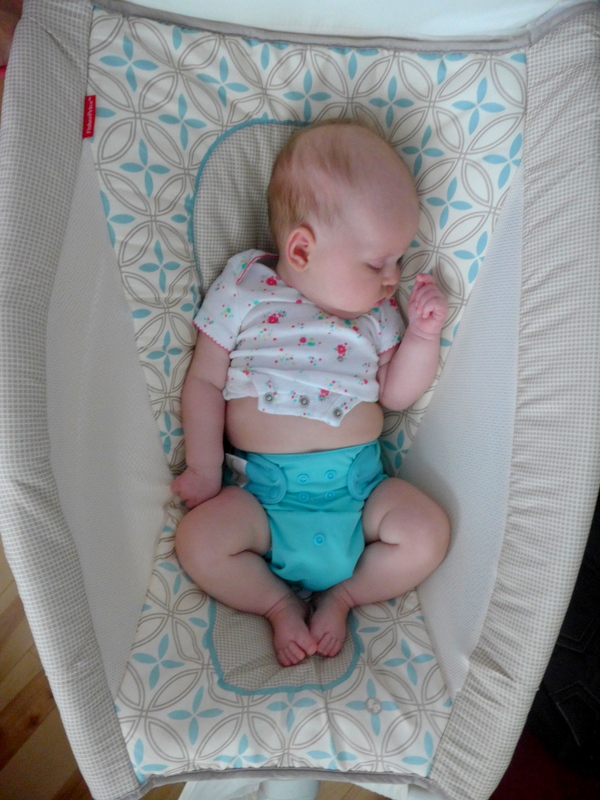 Here's the table after I set it: 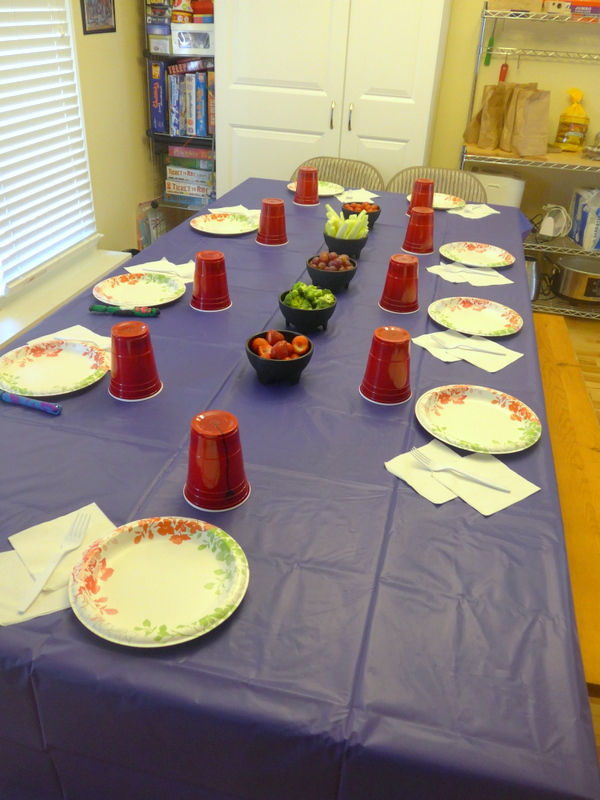 The girls were so hungry but the pizza wasn't quite ready (Andrew went to Little Caesar's to pick up a few pizzas) so I let the kids come in to eat fruit and veggies, which they were quite excited about.

The cups, if you can't tell, are all little fezzes. Because fezzes are cool. 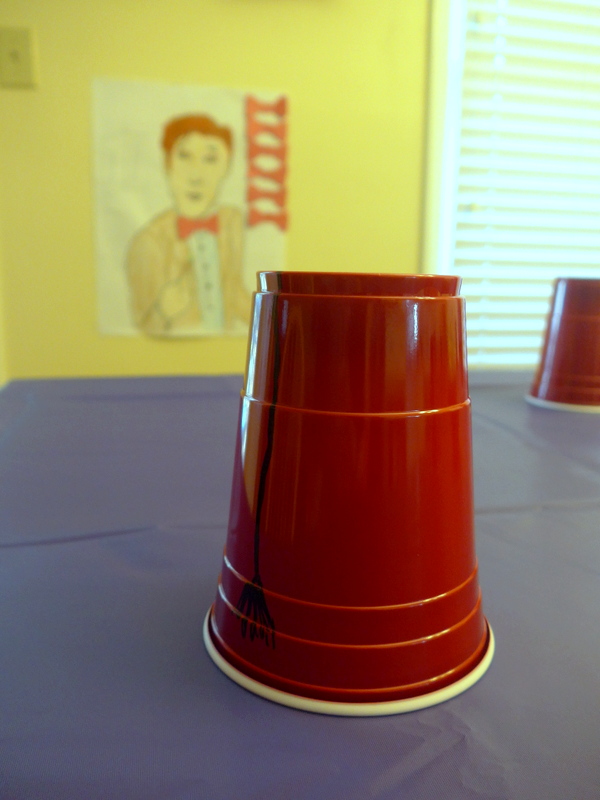 After dinner we opened presents and then had cake before turning the kids loose in the backyard again.

Rachel wanted a TARDIS cake but I didn't want to try to dye the icing a respectable TARDIS blue or bother with stacking enough layers to make it tall enough. I knew I'd be working on the cake with a three-year old and three-month old underfoot and I wanted to set attainable goals. So instead I made an "Eleventh Doctor" cake—just a simple two-layer round cake, roughly iced, with a fondant shirt collar (using fondant leftover from Benjamin's birthday—that stuff lasts forever), and fruit roll-up bowtie, suspenders, and buttons. 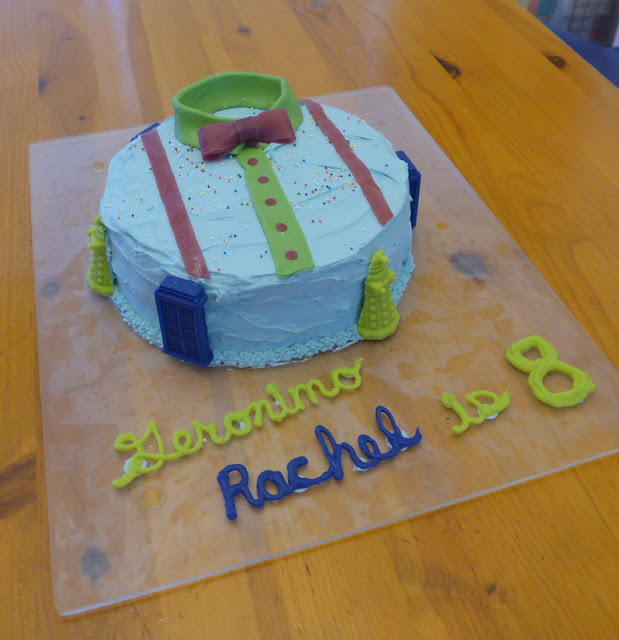 Oh, and we ordered a little mould of TARDISes and Daleks and used some candy melts to make the decals on the side. We figure the mould will be a hit at our house for quite some time since Doctor Who has been around forever. 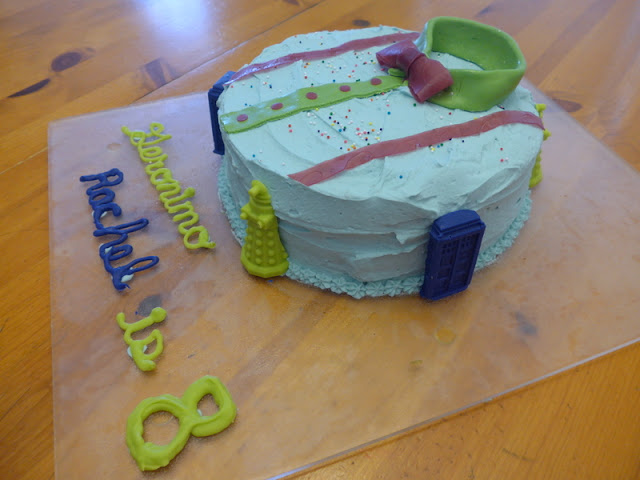 Here are the girls singing "Happy Birthday" to Rachel. They were all so hyper and singing so loud. 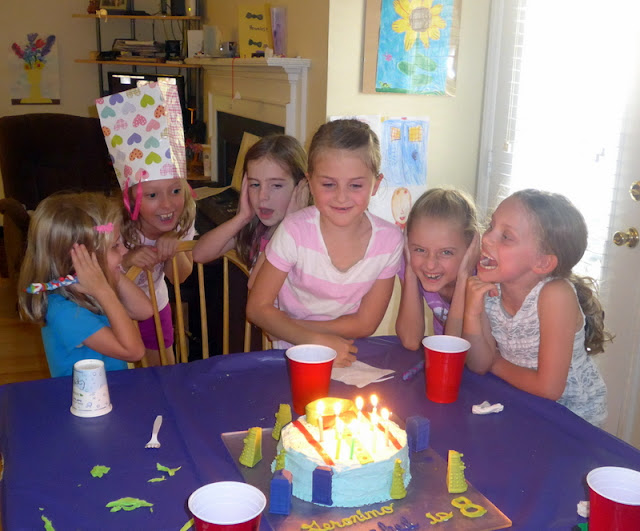 It was a pretty fun birthday. I think we had just the right combination of planned activities and free play. And Rachel has such a wonderful group of friends; they were a joy to have over.

But mostly I'm glad I don't have to plan another party until...2017, by my calculations, but that's a double party year, so wish me luck!

And that's enough looking into the future. We don't need to think about Rachel dating, Miriam starting seminary, Benjamin being on the brink of becoming a deacon, and Zoë getting baptized quite yet! No, thank you.

At least I get a year off every now and again! (It's a good thing I don't have to do this for a living or I'd just be worn out all the time!)
Posted by Nancy at 11:36 PM