Saturday at the museum

Speaking of things that are fitting Zoë now—the giraffe onesies that (I think) Uncle Patrick picked out for Zoë finally fit. I packed them out to Utah (even though they'd just come to us from there when Zoë was born) just in case Zoë grew a ton while we were out there, but she didn't. She saved her major growth spurts for after we got back home and now she fits in these onesies, which just a few weeks ago looked huge. The tag says 0–3 months, but they're certainly a bigger 0–3 months than other things she used to wear but no longer fits! 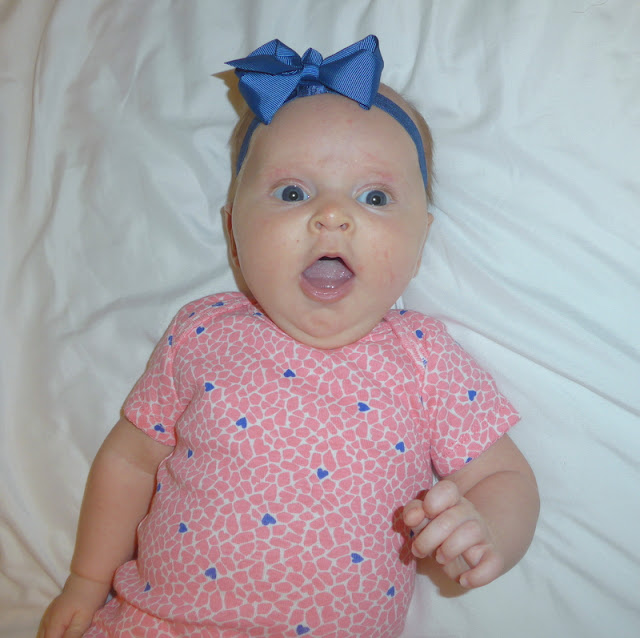 Anyway, after making them do chores all morning, I took the kids to the museum on Saturday afternoon so that Andrew could have some peace and quiet at home. He wanted to get some work done after having a somewhat stressful day on campus on Friday. We stayed until closing time.

We first stopped at the light and sound exhibit so that I could sit on the couch and nurse Zoë while the kids played (that was actually a pattern we repeated throughout the afternoon—"Let's find a shady/cool/quiet place for me to nurse Zoë while you guys play.").

This "falling sand" exhibit is fascinating; you use your shadow to "catch" the virtual sand as it falls from the top of the screen: 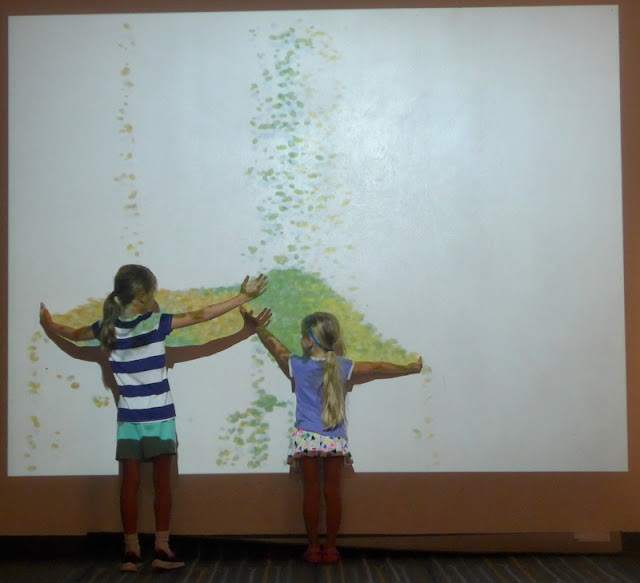 Here we are learning about ratios, with two little girls in one giant chair (there's a regular-sized chair and a teeny-tiny chair as well): 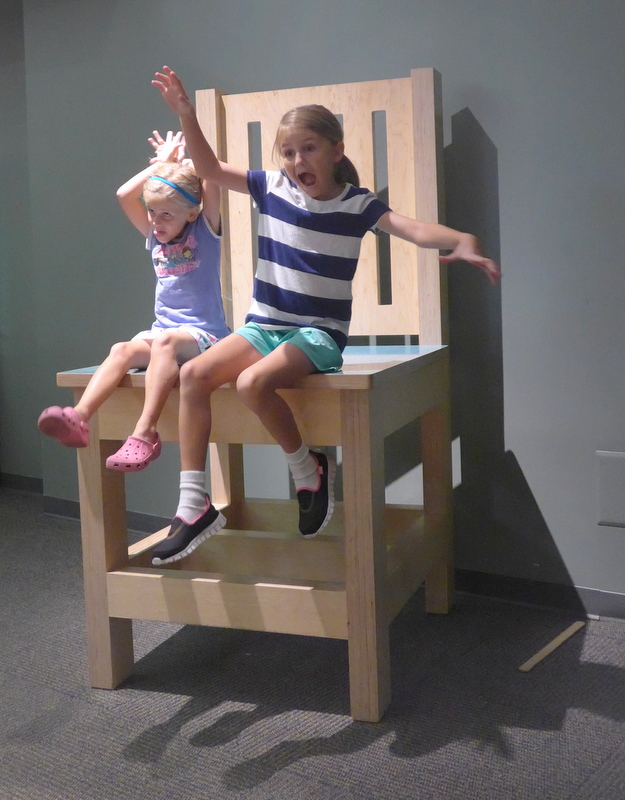 And at this table Benjamin is supposed to be building scale models of different shapes but he's really just playing around, which is equally important to his learning at this point: 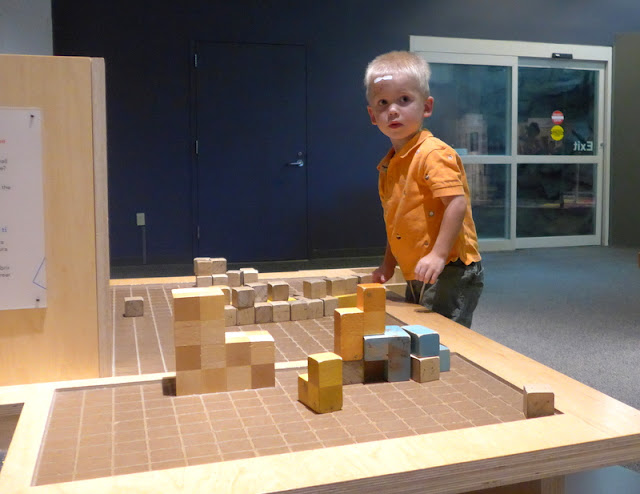 I was watching them all from the regular-sized chair. There are mirrors facing all the chairs so you can see how big you are compared to the chair. Rachel and I used it to take a selfie: 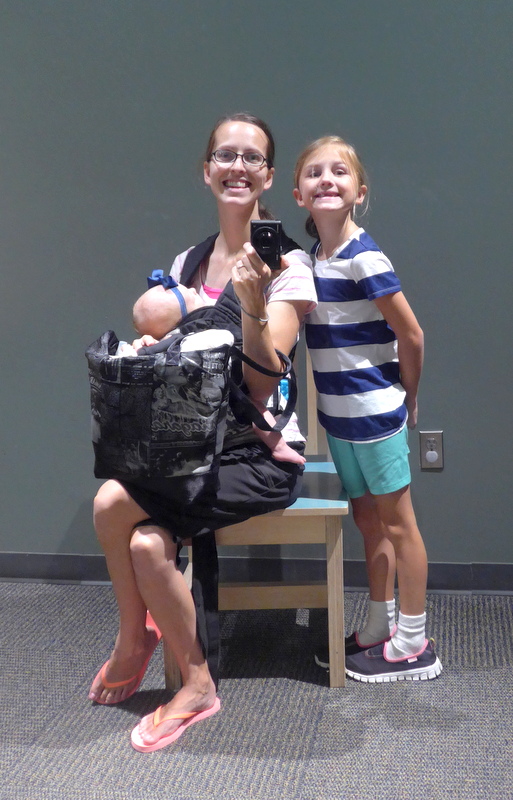 We stopped to play in the sand on our way to the farm and the butterfly house:


I love how Benjamin is using two shovels to fill two trucks at the same time (there were plenty of other toys lying around outside the frame; he wasn't hogging them all): 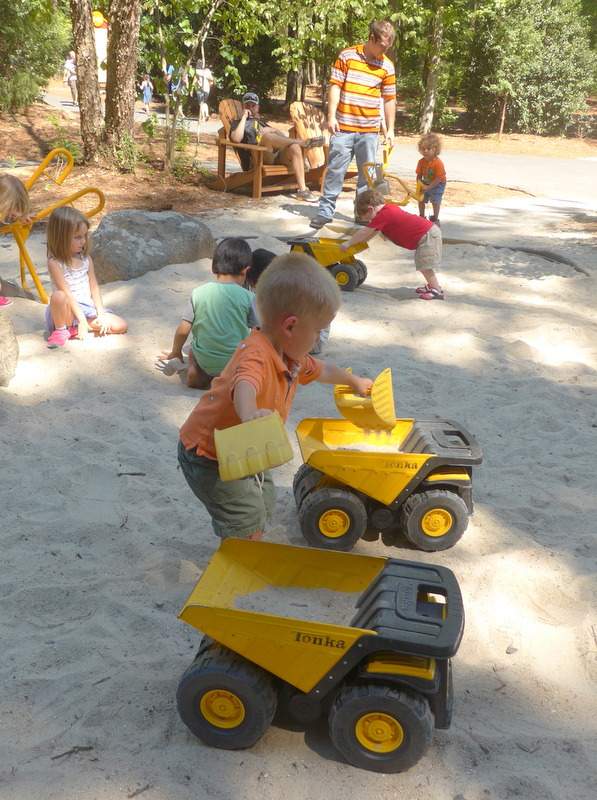 We started to go to the dinosaur walk but when we stopped at the dinosaur dig for a rest in the shade Benjamin started to do the potty dance. We had to backtrack to the closest restroom and we made it in time for him to use the potty but then I checked the time and we didn't have long until closing time so we decided to skip the dinosaurs and head to the mists. Benjamin was upset about this so I told him that if he had gone potty in the butterfly house when we were right by a toilet we wouldn't have had to backtrack—and use up all our dinosaur time—later, so if he wants to do everything on his list of things-to-do he has to speak up about his potty needs and not wait for me to notice his potty dance.

He was upset about it but seemed to understand that he'd wasted everyone's time and energy.

I felt kind of bad for pinning the blame on him like that, but it was true! And I'm not the first to have done it. On pitstop on the drive back to Utah, Benjamin pooped his pants in line at a fast food joint. He'd asked for chicken nuggets but in a fluster, Andrew said, "He'll have a hamburger!" as he took Benjamin out to the van for a wardrobe change. Benjamin was upset about not getting his nuggets so Andrew said that little boys who pooped their pants couldn't have nuggets; they only get hamburgers.

Cruel punishments we do in this house! No nuggets—only hamburgers! No dinosaurs—only mists!

I suppose it wouldn't have mattered if Benjamin had wet his pants because all the kids got soaked while playing in the mists, anyway. Including Zoë! Rachel carried her around for a bit and she got rather damp. 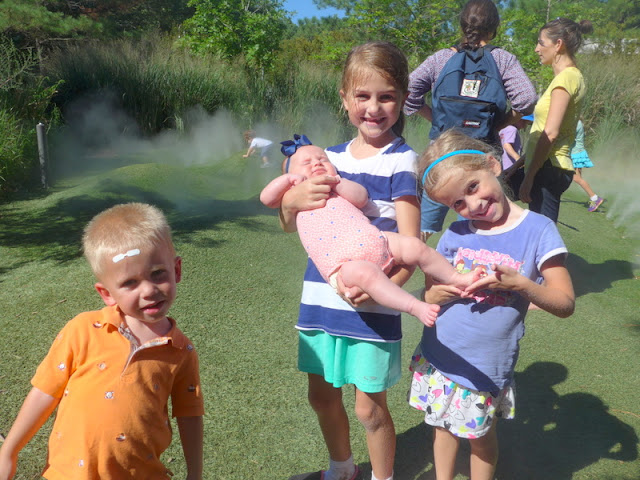 I have no idea why Miriam had to hold Zoë's foot for the picture, but she did. 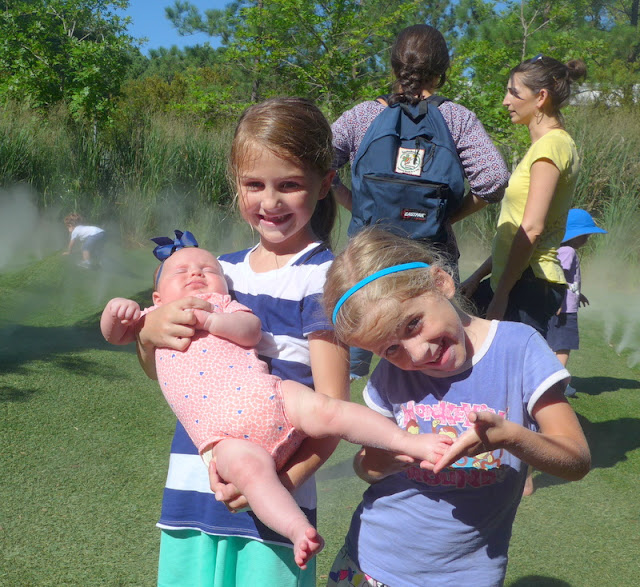 And I promise they had way more fun than it looks like that had in this picture: 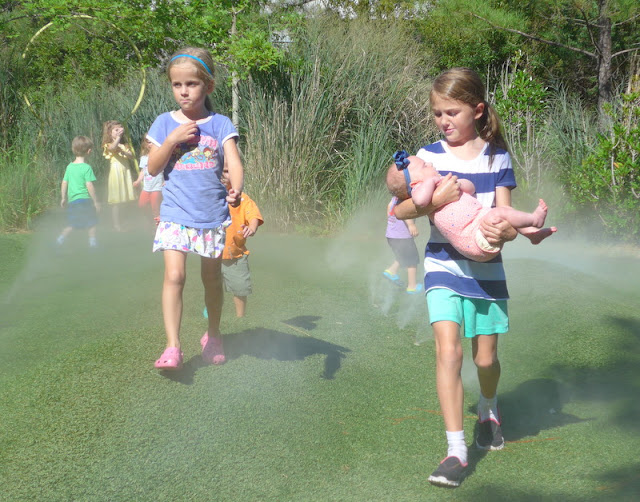 They had so much fun they didn't want to leave (they never do). 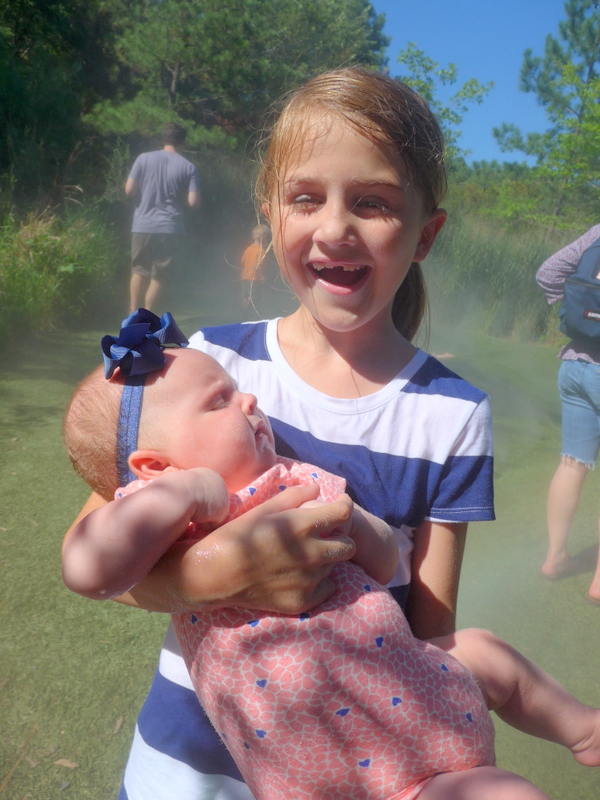 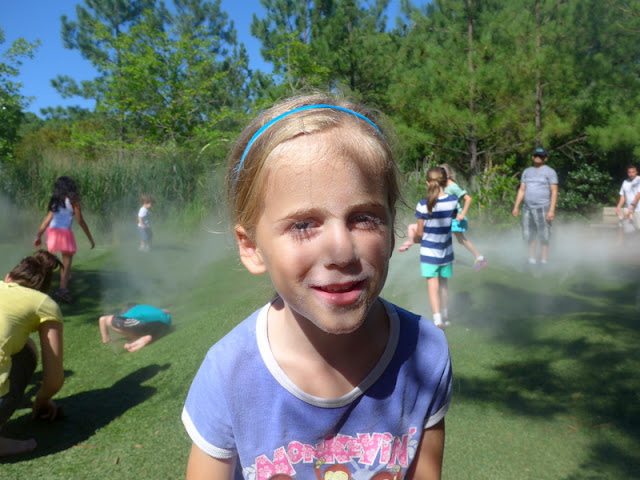 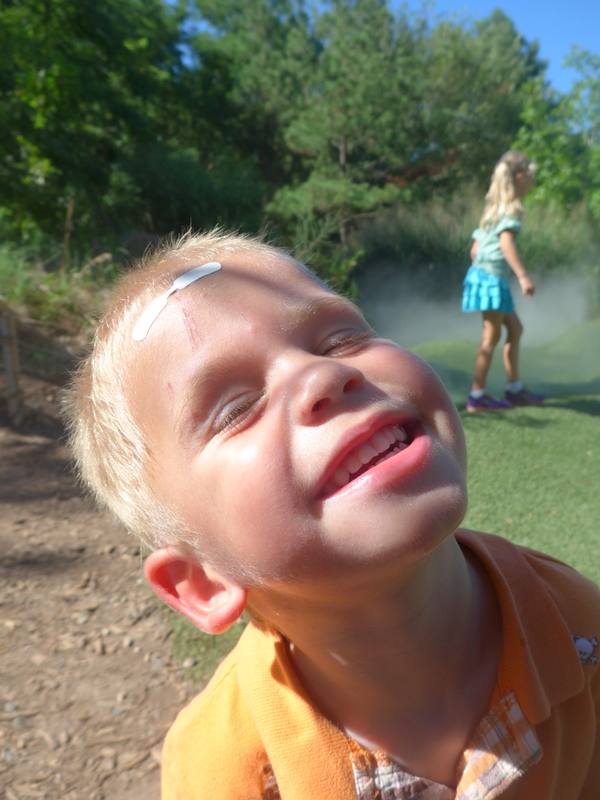 We came home tired out and wet with both sweat and mist water. We bathed the kids, fed them leftovers for dinner, and played a round of Settlers of Catan before bed. Not a bad Saturday.
Posted by Nancy at 11:54 PM