Today was our ward's annual pig pickin' and nothing terrible happened on the way there, which we're rather happy about. Our first year we got lost and only found our way because Sister Michael was kind enough to follow us until we hit a dead end and then told us to follow her. Our second year there was a huge accident and police were rerouting traffic and it took everyone forever to get to the park. Last year we almost were a huge accident that would have caused traffic to be rerouted.

This year we just drove to the park without anything out of the ordinary happening at all. It was great!

I don't know why we don't visit this park (Little River Regional) more often, really, but we're sure to in the future. I just learned they have free programming throughout the year—"tiny trekkers" is one I think we'll start attending because I think Benjamin will really like it. It's like story time...but in the woods with a ranger...so it might be a little easier for my rambunctious boy to get through.

Anyway, the pig pickin' was fun! We arrived at 11:01—right on time—so had plenty of time to play at the playground while we waited for other people to arrive. Rachel asked if she could take Zoë down the slide so I told her that she could, thinking she'd—of course—take her down on her lap, but the she sat Zoë down at the top of the slide! 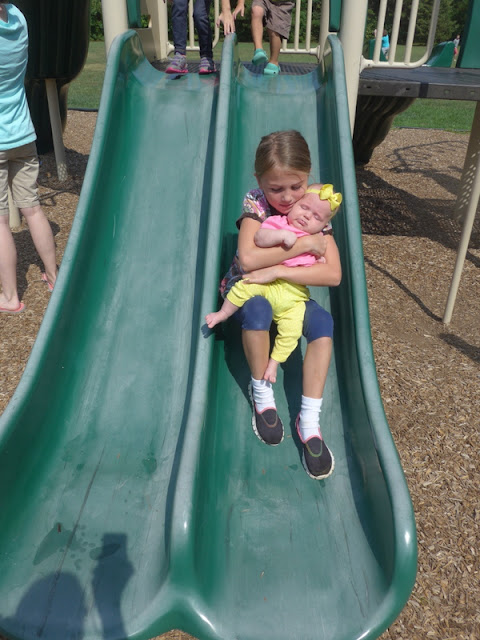 Turns out the slide wasn't very slippery at all, so Rachel ended up scooching down on her bum, but I suppose it was still a successful first slide experience for Zoë. 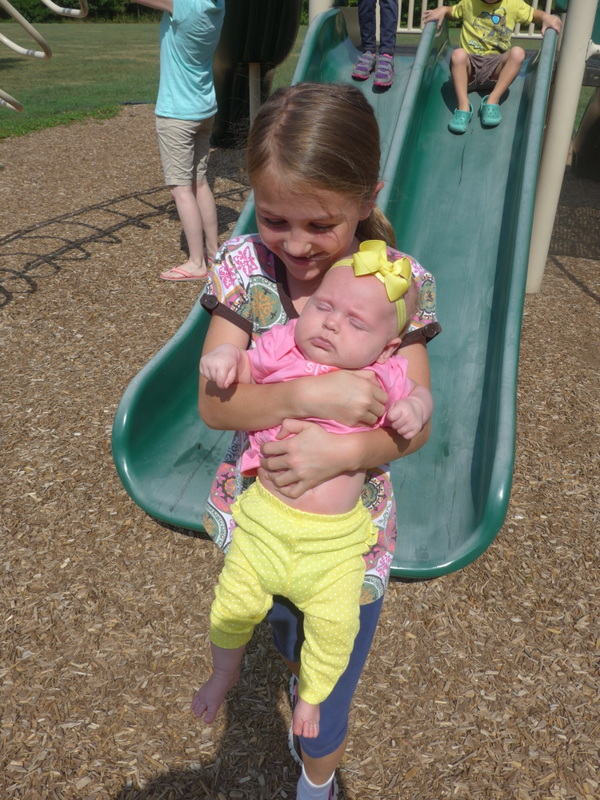 Here are Miriam and Benjamin walking down the slide. I think they had more fun doing that than trying—and failing—to slide down on their bums. 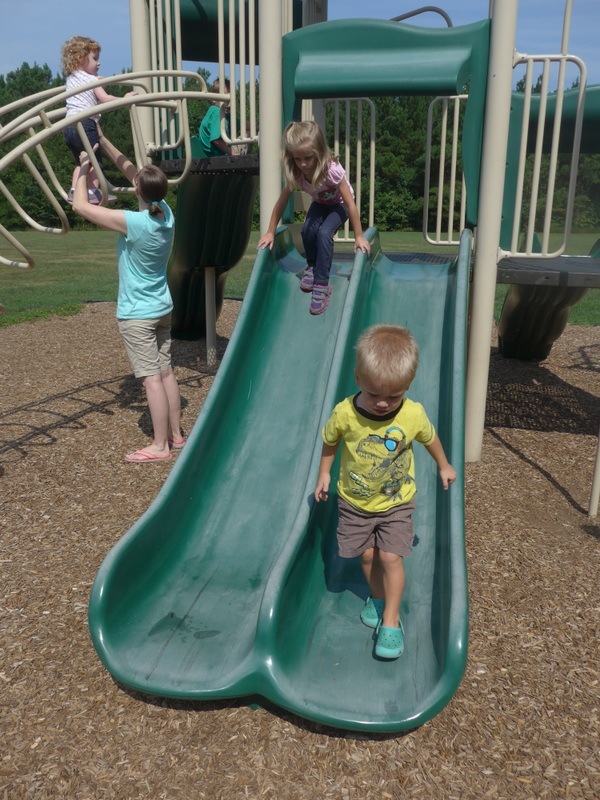 Andrew took Zoë from Rachel and whispered to her, loud enough for me to hear, "Come with me, Zoë. I'll put you down the slide by yourself while Mommy's not looking." 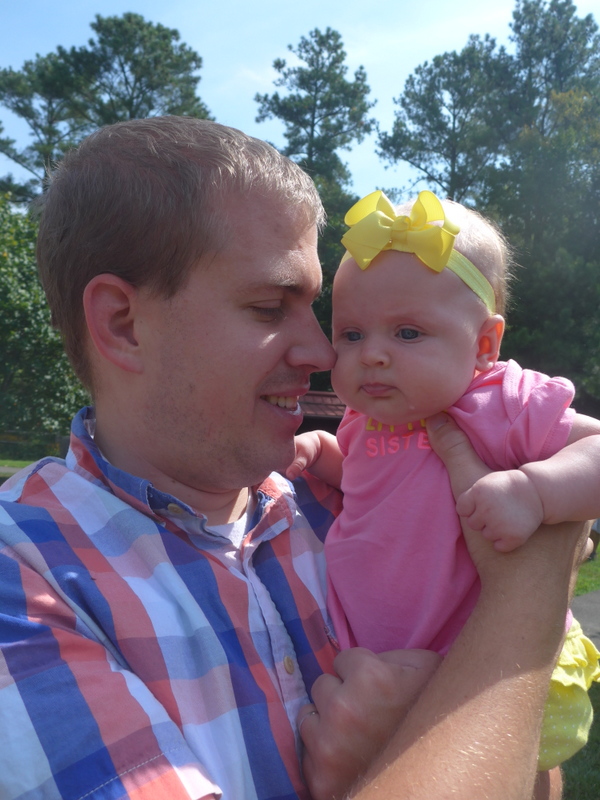 Naturally I followed them. Zoë wasn't entirely impressed with her ride down the slide. 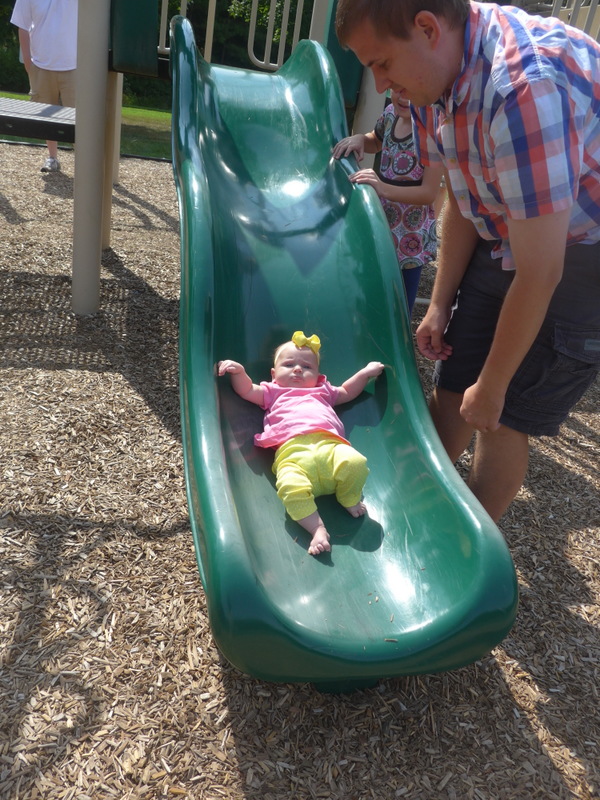 Here are those two together again, probably colluding against Mommy: 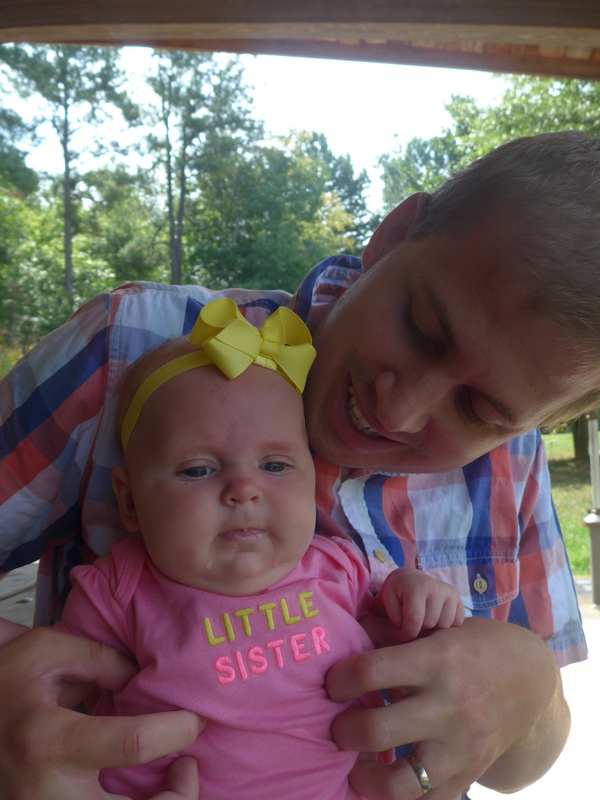 The kids played tag until they were all hot and sweaty. As children arrived they seamlessly joined in the game. Here's Miriam chasing after Benjamin: 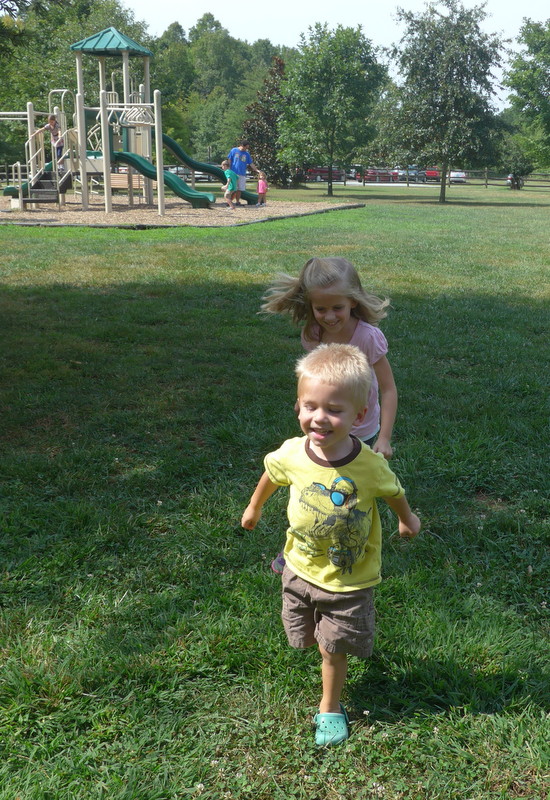 After we had lunch—BBQ pork, baked beans, potato salad, coleslaw, dessert—we walked around the little loop trail. We told the girls to run ahead and try to lap us, so they're not in this fabulous picture of my biggest and littlest hikers: 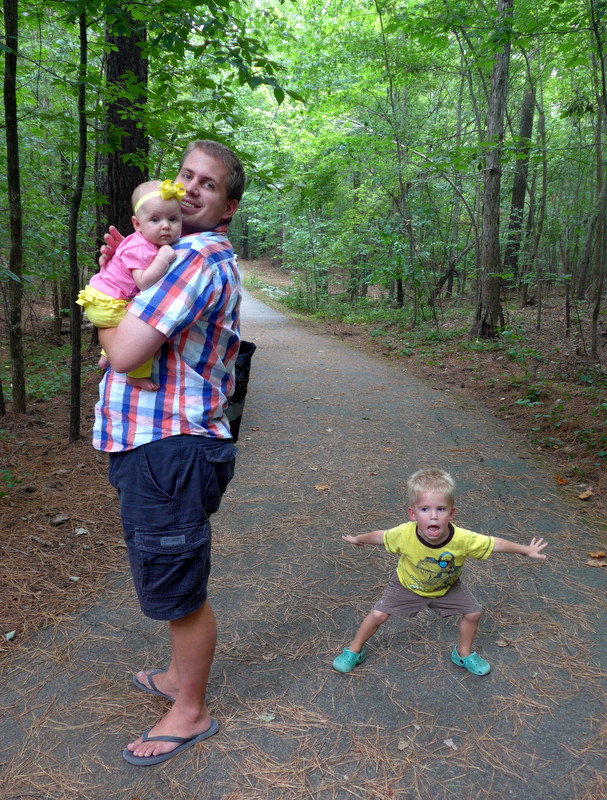 Benjamin has enough personality for five kids. I swear.

He was so wild the entire day! He was going around and rubbing his sweaty head on people and making all the ladies in the ward hold him on their laps—like, a group of moms was sitting on the grass talking and he just ran up and plopped in an unsuspecting lap. He did this more than once. And it wasn't even like he accidentally thought it was me or anything; he was doing it on purpose. It was kind of weird...because sometimes he's shy. But apparently not today. Today he was super energetic and sociable.

Toward the end of the trail I noticed some planet signs and so we started talking about what they were and how long they've been there because I've never noticed them. Apparently it's hike of a scale model of the solar system. And it's been there for years. And I just haven't ever noticed it. 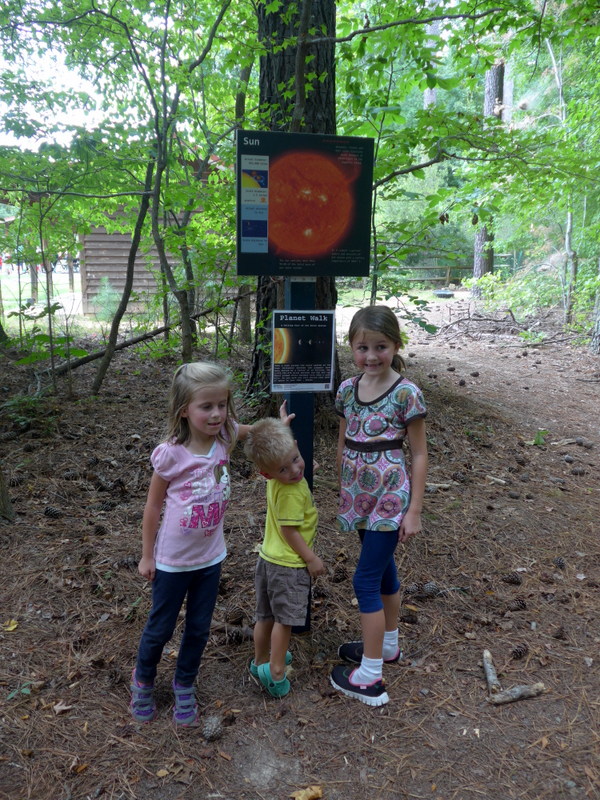 So we started at the sun and made our way to Neptune (actually, they included Pluto as well, but they also included Ceres (a dwarf planet in the asteroid belt), and both signs talked about how they're dwarf planets), stopping only to feed the baby, scream and run away from bees, and say howdy to a few people we met along the trail.

Zoë is usually willing to eat at any time, and in any place, but she also gets fussy when her environment is too crowded or loud. I tried nursing her away from the pavilion on a bench by the playground, but it was still too much for her. She needed the solitude of the woods to calm down long enough to eat.

Meanwhile she was perfectly content to suck on Andrew's shirt while she waited. She was ravenous but enjoys sucking on cloth even when she's not hungry—she's always pulling blankets or shirts to her mouth so she can suck on them. 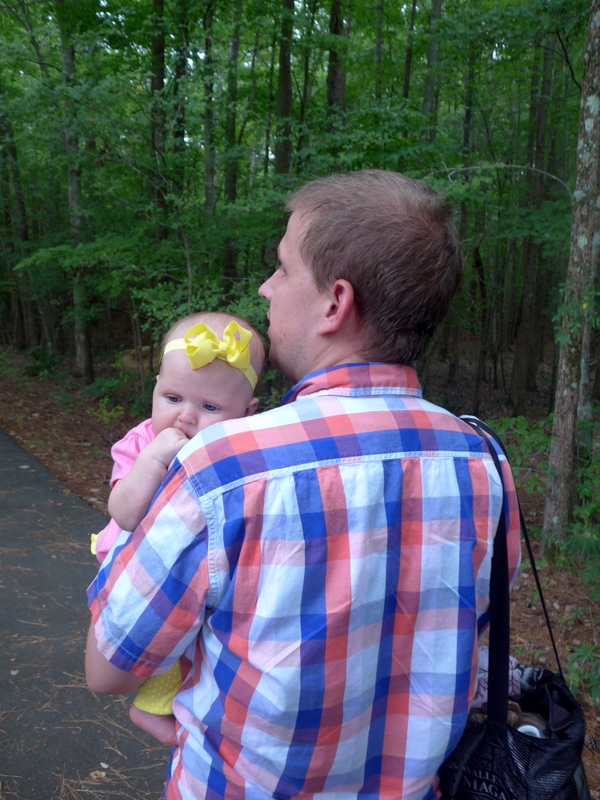 Andrew had a huge wet spot on his shoulder from all her sucking. 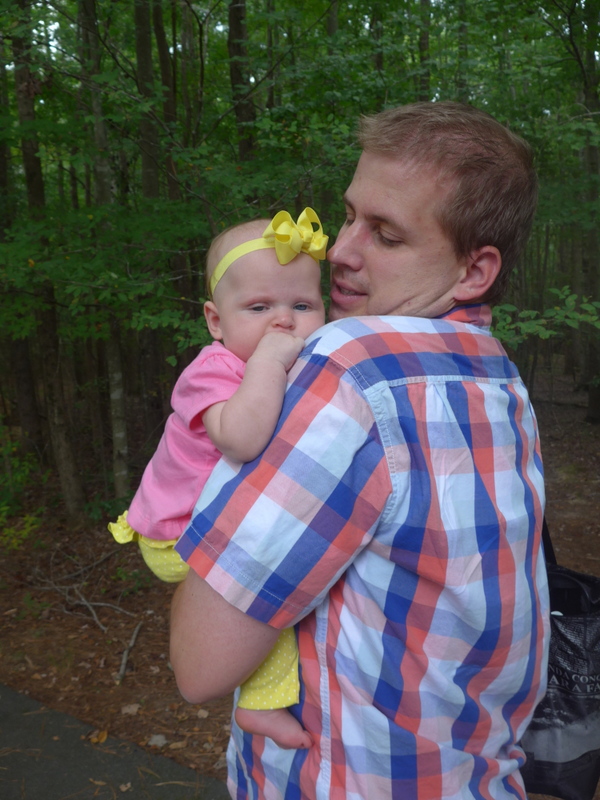 I took this picture because of all the gross tent caterpillar homes above our heads: 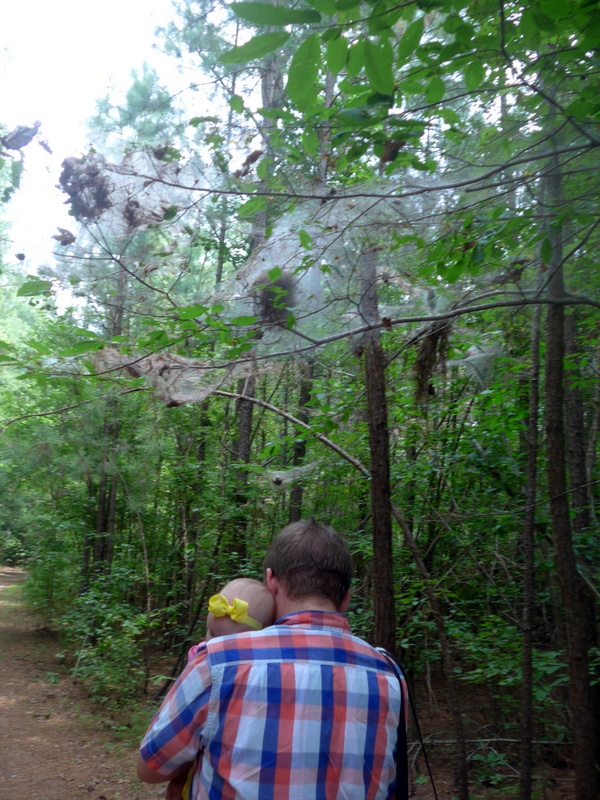 Here's Rachel by her favourite planet, Uranus—because it's such a beautiful blue! 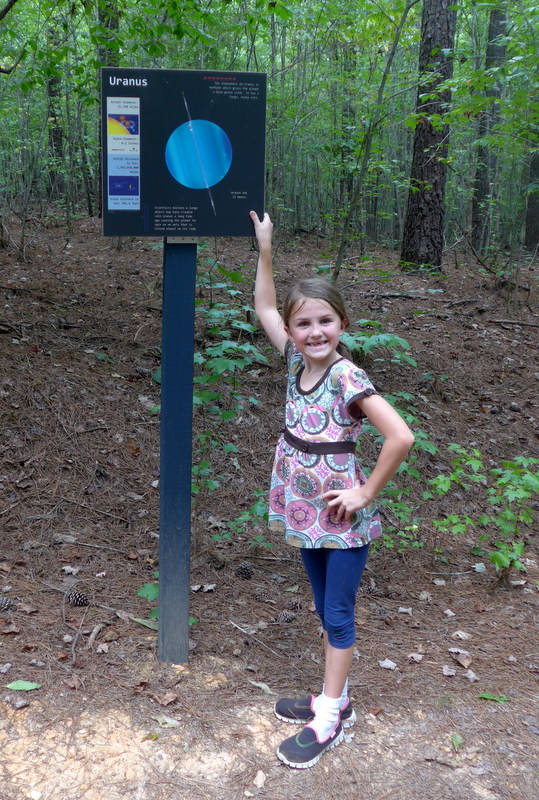 Miriam's favourite planet is Mars. She wants to be the queen of Mars.

And here's Benjamin wandering off ahead of us with his arms behind his back: 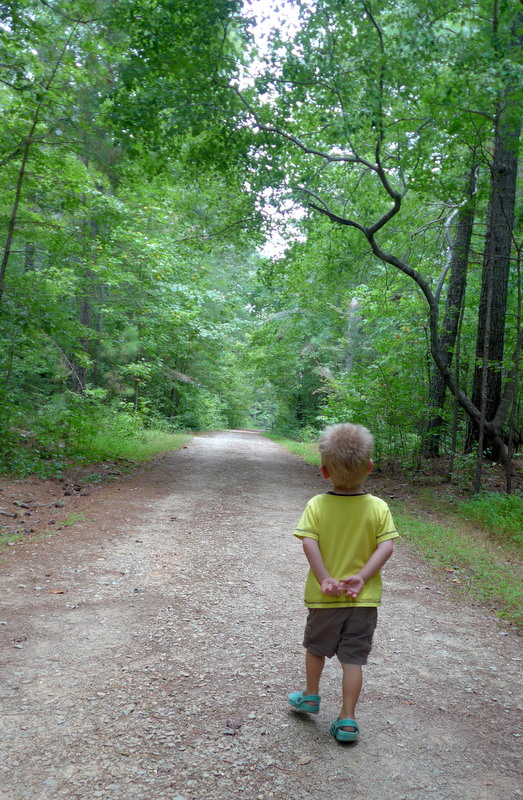 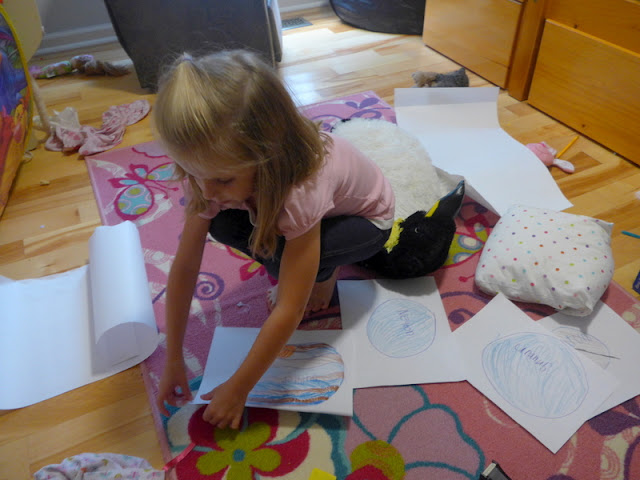 She also made this beautiful drawing of a rocket, a satellite, an alien spaceship, and multiple constellations of her own invention: 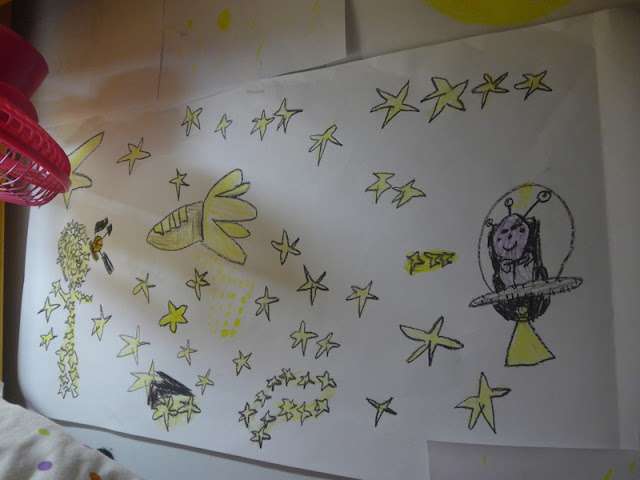 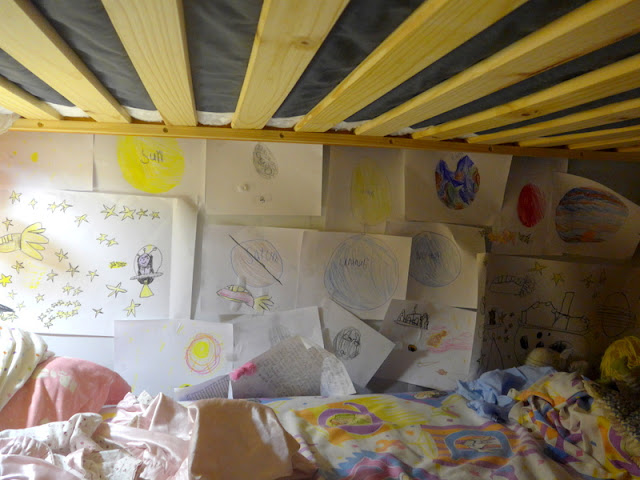 And here's Rachel's solar system, spanning the ceiling above her and the wall beside her, along with a Doctor Who poster she made this afternoon: 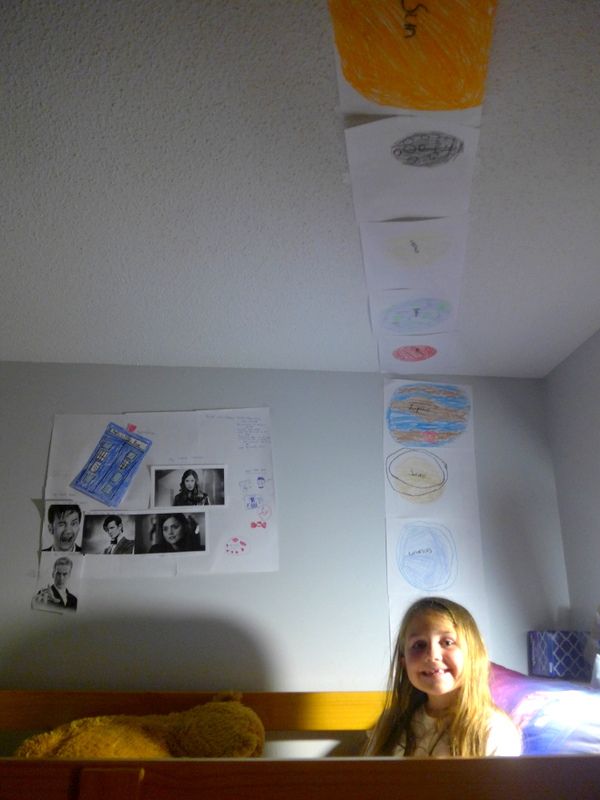 Andrew posted this on Facebook, asking whether our "nerd children" are the result of nature or nurture and a friend responded, "The age old question of nature vs. nerdture..." Most everyone else, however, concluded that it was a mix of both nature and nurture.

I'm just glad that they found our afternoon walk so inspiring!
Posted by Nancy at 12:09 AM