When I was still a senior in high school but simultaneously a freshman in college I roped Andrew into take a music notation class with me where we learned to use the program Finale. I think I was only taking it because my mom was taking it and the class was going to be dropped unless x-number of people signed up—so she recruited the number of people required.

I'm not sure how much I learned, honestly. My musical theory background was/is fairly non-existant so I felt like I was duplicating some pretty crazy stuff. And it was my first time using a Mac, really, so the entire computer lab felt foreign to me as well as the program and the music and everything. I managed to squeak out a good grade, but I really struggled.

And then I never used Finale again because it's like $600.

Andrew, meanwhile, breezed through the class. He'd waltz in late, grab the assignment, bang on the keyboard for a few minutes, print off his finished copy, and make a quick exit. Easy A for him. And you'd think he could have at least spoken to me. Once. But he didn't. We sat in the same room twice a week for an hour for an entire semester and he didn't ever speak to me. Sheesh.

And then he never used Finale again because it's like $600.

I've since forgiven Andrew for not paying the least bit of attention to me that semester.

Oh, and I married him.


And there's a new program out now called MuseScore, which is an open source music notation program. It's free (which fits our starving-student budget perfectly) and I've learned quite a bit more about music than I knew back in 2002 so it isn't quite as taxing for me to plop a melody down. I also don't think I'm working with as complicated of pieces, but that's okay!

I put little ditties together for our ukulele choir and have quite a lot of fun doing it. The first piece I did was Donkeys Are In Love With Carrots/Why Shouldn't My Goose, and I accidentally wrote "why shouldn't my goose sing as well as they goose" (rather than "thy" goose) and the children bring it up every stinking time we play it. I should probably fix it and print off new copies or something.

Anyway, we've been looking at Christmas music, as I said. My contributions this year are "Bring a Torch" and "В лесу родилась ёлочка" (or, "The Forest Raised a Christmas Tree," or "V Lesu Rodilas Yolochka"). I'm excited to teach the children a little Russian...and pretend that I know enough French to teach them a little French as well. 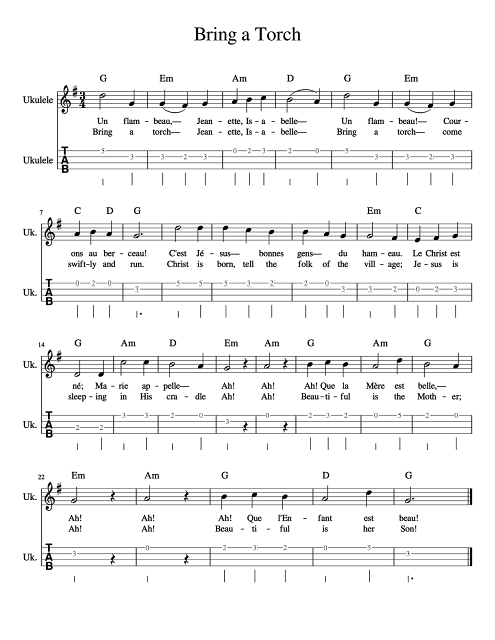 You have no idea how long it took me to get the extra verses at the bottom of "Yolochka"! I need to try to do that for "Bring a Torch" as well... 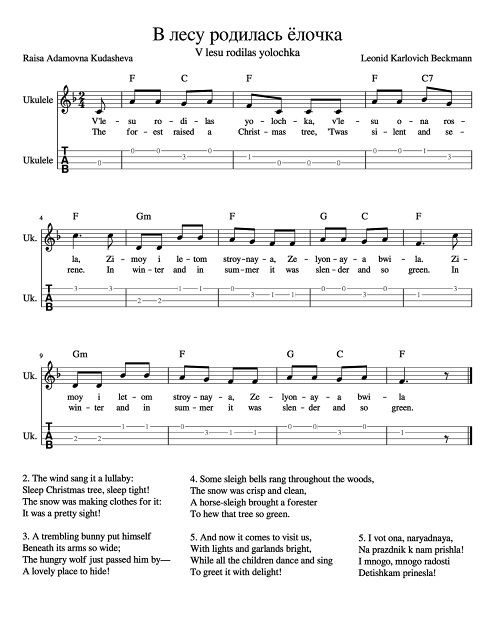 I'm the first to admit that I have no idea what I'm doing, but music is so fun to play with—I'll keep playing with it anyway.
Posted by Nancy at 12:16 AM

Email ThisBlogThis!Share to TwitterShare to FacebookShare to Pinterest
Labels: music