I started pumping and storing extra milk mere days after Zoë was born. Unfortunately, being approved as a donor was a painfully long process this time around.

First, the WakeMed bank wouldn't communicate with me until I had stored at least 200 ounces. Fortunately I had a supply of milk bags leftover from when I was a milk donor three years ago so I didn't have to go out and buy a bunch. But, honestly, you'd think they could send milk bags to a potential donor, right?

The Colorado milk bank was much more willing to get the ball rolling. They sent me the necessary paperwork before I was ready to donate a drop (though I'd technically already met the minimum 200 ounces, that milk was staying in North Carolina). They sent my blood sample kit and some milk bags to my mom's house in Utah and I continued to pump there, filling up both my mom's basement freezer and my mother-in-law's freezer:

My instructions were to go to Timpanogos Regional Hospital to both get my blood drawn and to drop off my milk, but when I called to make an appointment the nurse acted like she didn't know what I was talking about so I called the milk bank back and it turns out Timpanogos only does blood draws; they don't accept donations. So I offered to go to the Provo location and assured the Colorado representative that Orem and Provo are basically the same city, so it wasn't a big deal

The day before I flew home, my mom and I went to the Utah County Health Department to donate my milk. First I had to stop by the Women's clinic to get my blood drawn and was met by a surly receptionist. She was so grumpy. I just cannot even...ugh.

But my phlebotomist was nice, so there's that.

Then we had to take my blood work and my milk upstairs to Baby Your Baby and leave it all in their big freezer so they can ship it off to the Colorado Mother's Milk Bank. The woman up there was super nice and I got to pick a "prize" for donating my milk—not as payment but as a thank you. I chose some Indestructibles for Zoë to enjoy in a few months.

And that was that. I was milk-free. At least...in Utah.

North Carolina was another story. My freezer was full to the point of overflowing and my back-up freezer's owners were in Utah so I started farming my milk off across the street. I took up an entire shelf of my neighbour's freezer and then kept filling up my freezer while I waited to hear back about whether or not I'd been approved. I knew it would take some time because my milk would have to be shipped from Utah to Colorado and then my blood work would have to be tested.

My milk finally made it to Colorado on July 31st (sixteen days after I'd dropped it off in Utah) meanwhile my freezer continued to overflow and I was running out of milk bags. I'd requested more on July 21st (soon after returning home to North Carolina) but they'd accidentally been sent to my mom's house, which meant she had to mail them out to me.

So when I called to ask about the milk bags I also requested a box to ship more milk to Colorado because opening the freezer was getting a bit ridiculous. We seriously could not open it without milk bags falling all over the place. And I had not heard anything about how soon I'd get approved (because WakeMed, again, wasn't interested in communicating with me until I was completely approved (as if it would have killed them to take some milk before I was approved—Colorado did; why couldn't they?)).

I asked another neighbour for some freezer space yesterday because there was absolutely, positively no more room in my freezer. And then, like, an hour after I ran a grocery bag full of milk over to her house I got the following email: 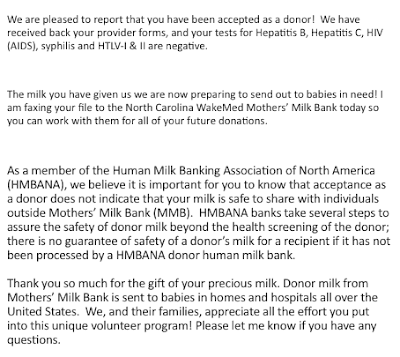 I'd never thought of pumping milk as volunteer work, per se. But I guess it is.

This morning I received this email:

So I guess WakeMed can communicate with people, though I'm less than happy that "local" means a forty-five minute drive (one way) for us. Because that's super convenient. Not.

I'll be happy when Durham gets their collection centre!

I still haven't received the package (box and milk bags) from Colorado, but I did get the milk bags my mom forwarded to me in the mail this morning. I almost did a happy dance because I was down to three milk bags and I really didn't want to go to the store to buy more (I'd already bought a package to "hold me over" while I was waiting...because I requested milk bags about three weeks ago so while they ask, understandably, that you request supplies before you're "out" so they have time to ship some to you, I did not anticipate a three-week wait).

So now I have milk bags. And a box on the way. And Andrew is planning on running down to Cary before he goes to campus tomorrow to drop off a bunch of milk. And then I guess I'll fill up the box when it gets here and ship it off to Colorado...unless I'm not allowed to now that my records have been transferred to WakeMed.

This has all been kind of a confusing mess. But it's worth it, I suppose. Gotta feed those NICU babies.
Posted by Nancy at 2:21 PM