Rachel finished watching the last episode of the Eleventh Doctor the night before her birthday party (which I'm well aware was about a month late). She chose a Doctor Who theme for her party, which is just as well because we have a bit of Doctor Who fever at this house. Even the children who haven't watched it are rather into it. Benjamin and Miriam are always talking about Adipose and Daleks, building TARDISes and other things out of LEGO, and drawing pictures of all things Doctor Who.

I'll showcase some of their work (and elaborate on the party) a bit later, but for now I'll post some pictures of our kids with the TARDIS we made this morning using the box our piano came in, a sour cream container, paper, and tape. The kids were thrilled both to be involved in the process of making it and with the finished project. 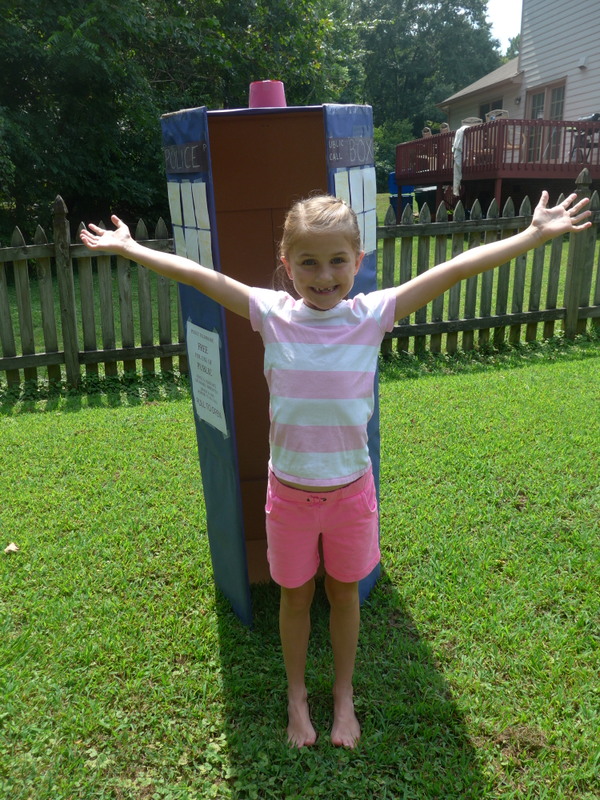 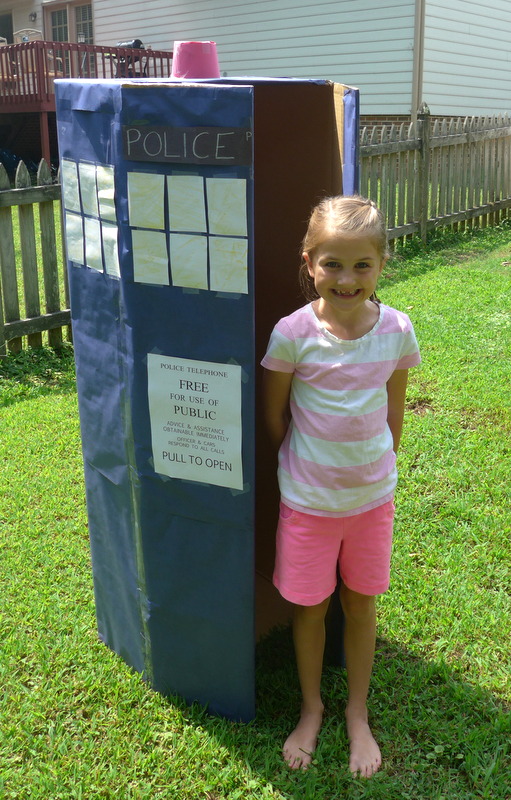 Rachel's such a sweet girl. She gave me a hug before bed and said, "Thanks for the party, Mom!"

It felt so nice to be thanked for something. I feel like moms do so much but that we often forget to thank our mothers because we're so used to them giving so freely. At any rate, I know that I often took my mother and all of her service for granted when I was a little girl. How did I get so blessed to have such a thoughtful child as Rachel? 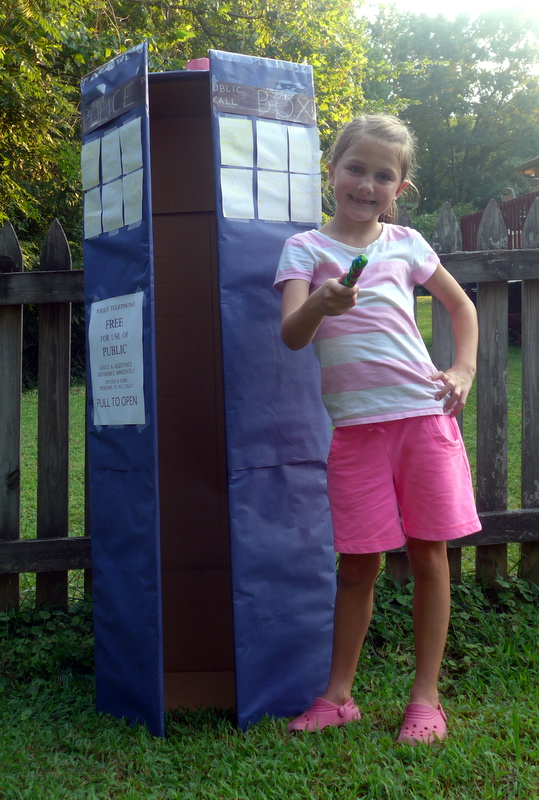 Here are the three older children posing with the TARDIS: 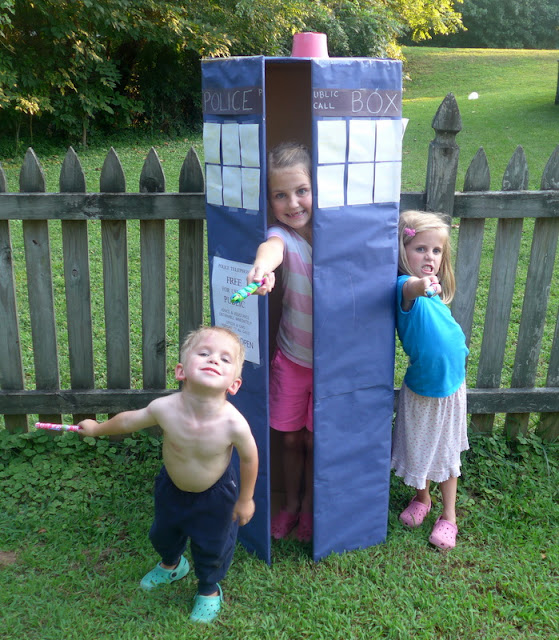 I chose this picture mainly for Miriam's fierce face. She's not really that tough; inside she's a sweet little marshmallow. On Friday I had a terrible day with Benjamin and was a little frazzled and short tempered when the girls came home from school. Rachel said, "Mom, go lie down with Zoë. I'll put on a movie or something." And I totally took her up on that. Miriam decided that instead of watching the movie she'd clean and vacuum their bedroom—and she did a great job. In her journal that night she wrote, "Dear Mom, I knew that you had a bad day with Benjamin. But I also knew that I could come home happy so I did." 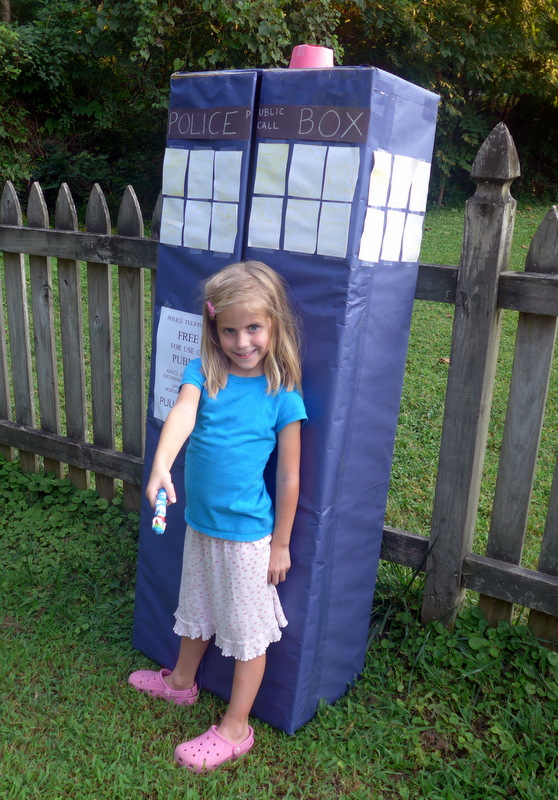 Sometimes I feel like these girls take better care of me than I deserve. They're both just great and I love them to pieces. 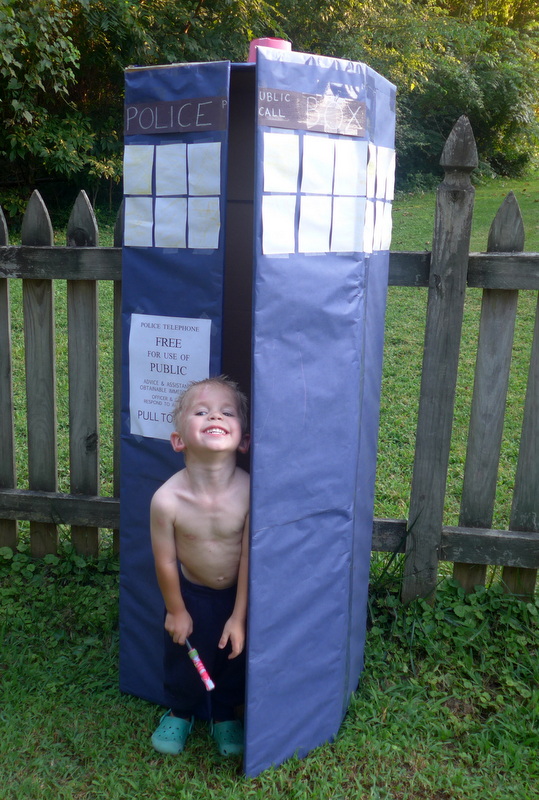 He makes me want to pull my hair out one moment and cuddle him forever and never let him go with my very next breath. He's the sweetest, most rambunctious, adorable toddler. He's a terror. He's a joy. He's funny and creative. He's obstinate and wild. He's my boy. 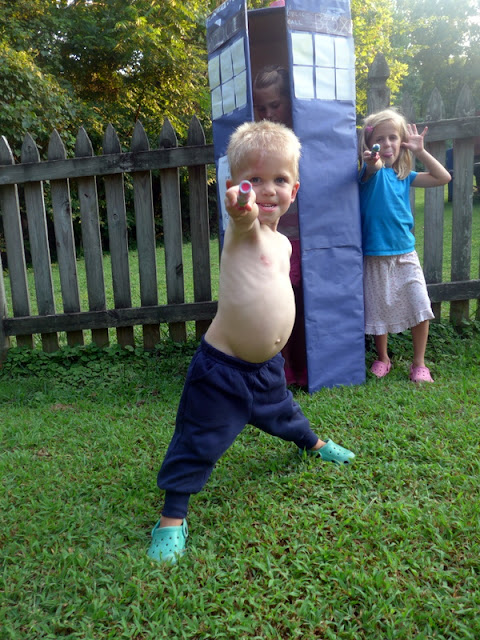 He ran outside without a shirt on after dinner (Andrew had taken it off when he was washing him off because Benjamin was filthy, of course). Miriam came running back into the house to tell on him.

"What?!" Andrew said, rushing to the porch to look because Rachel had all her little girl friends over. "Oh, he still has pants on. He's fine."

Miriam ran back outside and yelled to everyone, "It's fine! My dad says it's fine!"

He was holding his own in the intergalactic battles the big girls were engaging in. They play a game at school called "The Doctor's Daughters," though this evening they were playing it in our backyard instead. At one point a few of the girls came inside to tattle on Benjamin because "your mom needs to know if he's doing this stuff," and that's true. The problem was he was hitting Miriam with the sonic screwdriver he'd made earlier in the evening and was "leaving red marks on her arms and stuff."

So we talked about it. Because he really shouldn't be hitting people with sonic screwdrivers. Or, you know, anything.

Before letting him back outside I said, "And we don't hit people with them, do we?"

"What?!" said Andrew, who'd overheard our conversation and was feigning shock and horror at Benjamin's (very characteristic) actions. "He was hitting people with his sonic screwdriver?! Surprise!"

"No, I weren't!" Benjamin said defensively.

"Benjamin!" I said, thinking I was catching him in a lie. "We were just talking about this. The girls said you were. Miriam was crying and..."

"Not people," Benjamin said, holding up his pointer finger to show me one. "Just. One. Person. One. Just Mimi!"

Lawyered. By a three-year-old. Story of my life.

He's pretty sweet though. Honestly. I just am a little nervous about him starting sunbeams and kindergarten in not-too-distant future because I fear he's going to be the child to bite someone (or something like that) on the very first day. *sigh* We'll see how much growing up he can do in the next little while...chances are he'll grow up a lot.

And here's the littlest one: 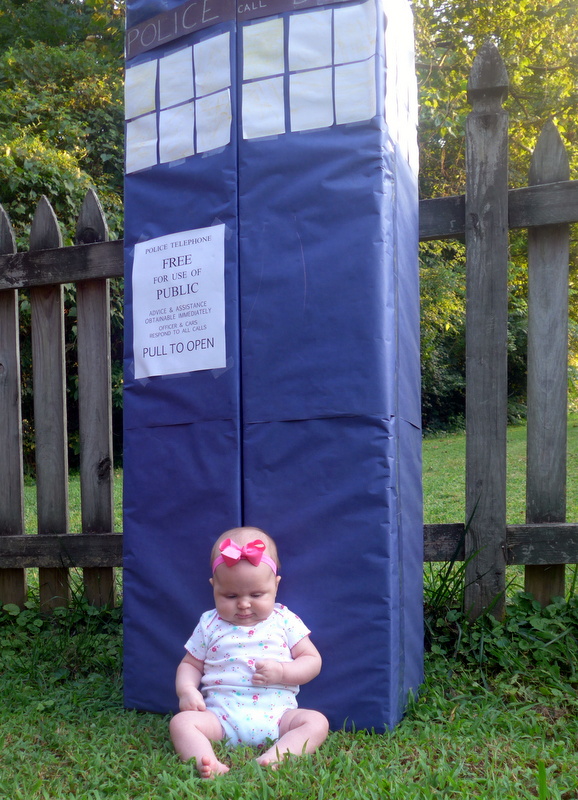 Zoë doesn't care about Doctor Who at all and was much more interested in the grass and her toes than anything else. She's sweet and patient and chubby and exhausting. And everyone dotes on her all the time because she's just so adorable. 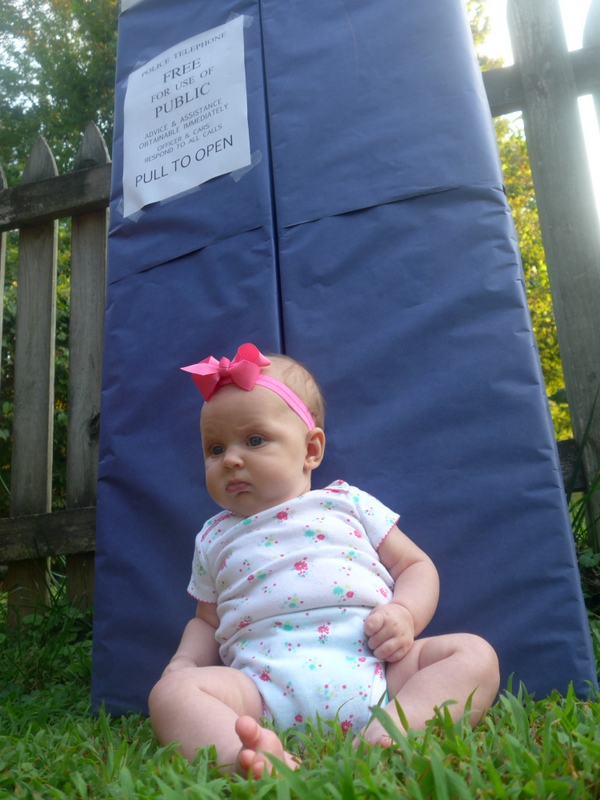 And what have we here? Someone who didn't want their picture taken with the TARDIS. 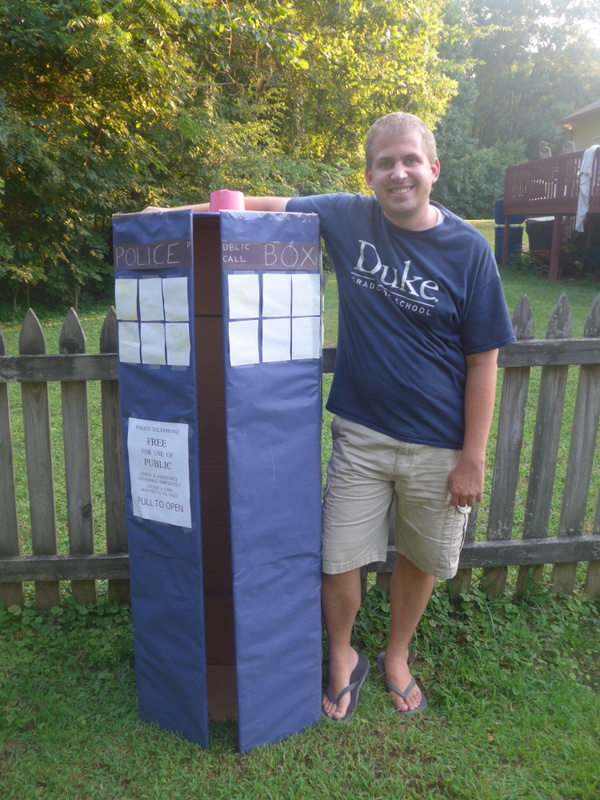 This guy. There are no words. He works so hard for our family—at home, at school, at work. He's fun to be with. He's my perfect counterpart and my very best friend.

I couldn't ask for better companions on this journey through Time And Relative Dimension in Space, traveling, to borrow my uncle's tagline, "at the usual rate of one second per second," which is too fast, too slow, and just the right speed all at the same time!
Posted by Nancy at 12:05 AM