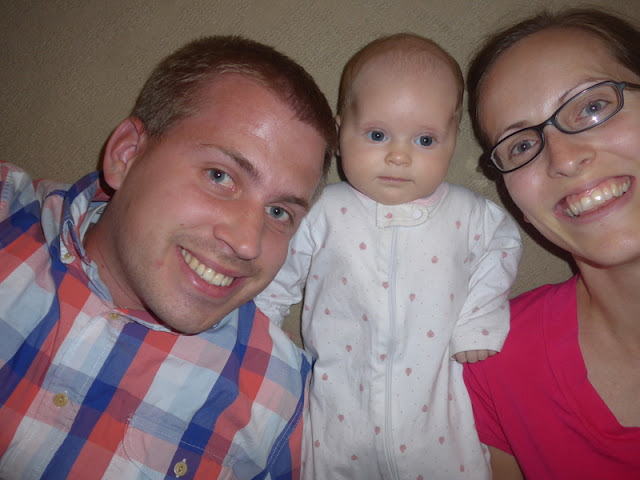 I thought she was going to be a thumb-sucker (and still think she might) but recently she's been happy with her first two fingers. She'll happily suck on those until she falls asleep. This was our first attempt at catching her in the act, but the flash startled her so she's not really sucking on them. 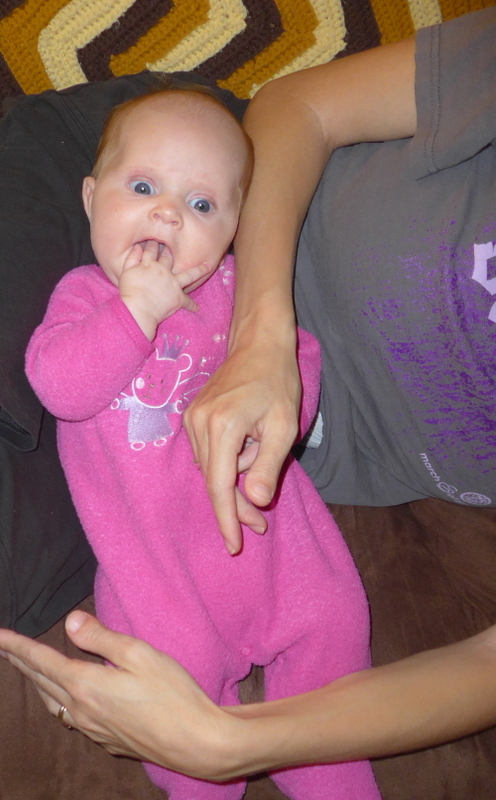 To get her really sucking on her fingers we needed the help from Benjamin. He's three years old, which means that we've lived in North Carolina for three years (our anniversary was August 20, at least, that's the day Benjamin and I flew in).

Here he is three years ago when he was about three months old (we're in New York, I think at JFK): 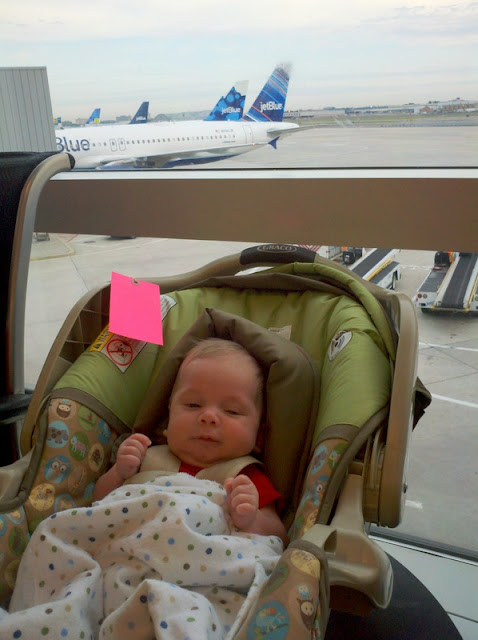 And here he is on August 20 of this year, running around with a LEGO airplane he and I made together. Crazy how time flies! Anyway, the day after we played with "small oh-ghee" he decided he wanted to play with "big oh-ghee" and built "the tallest tower in the world!" all by himself. 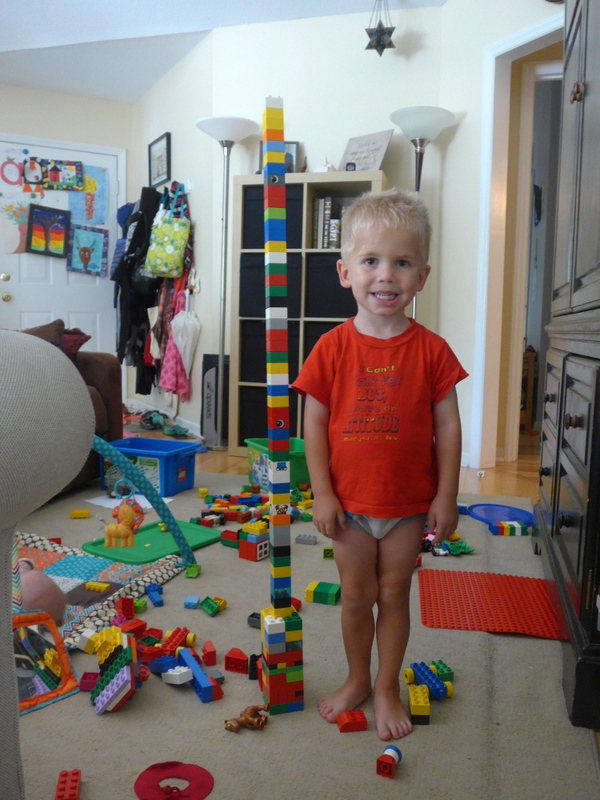 He made it even taller after I took this picture and even got the bathroom stool to help him reach higher and higher. He was having so much fun! And Zoë was happily playing on her mat beside him...until the tower fell down. Because guess which direction it fell? Oh, straight at Zoë, of course.

She was hurt and offended and scared and she has a powerful set of lungs and didn't hesitate in letting the world know about her anguish. She screamed and screamed while I cuddled her and bounced her and did my best to soothe her. She didn't quiet down, though, until she got those two fingers into her mouth. Here she is sucking her grief away. 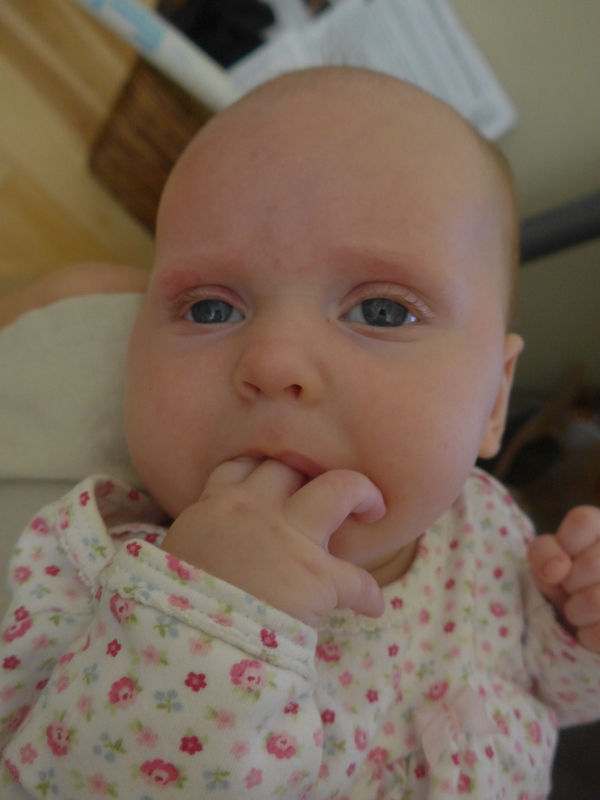 When Daddy was about Benjamin's age he built a tall, tall tower, too! This tower (not pictured) broke and landed on his head and Grandpa's pretty sure it was a turning point in his life. In Grandpa's own words (on a Facebook post from last August when we built a different tall tower): "Of course, there was that time we built the tower clear to the roof and when it broke, it fell on your head. Thus started your quest for a PhD...."

So, Zoë, having a LEGO tower fall on your head might not have been all bad (by the way, we're expecting you to go to graduate school now). 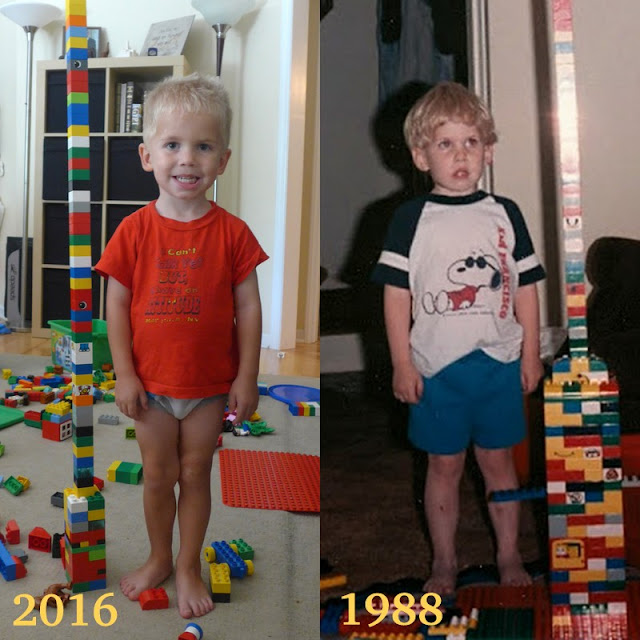 (I'm guessing on the date but the next picture in the album is of Aunt Katharine's first birthday (at least, it's a picture of her with a cupcake and other birthday paraphernalia) and Andrew's wearing the same shirt and has the same haircut, so I think 1988 is a pretty good guess. Shoot, I could even guess the month: March. He's wearing different pants so I'm not sure it's from the 8th, necessarily, unless he was still having potty problems like Benjamin still does...)

That Benjamin! Zoë still can't decide if he's terrifying or entertaining. Personally, I think he's a healthy mix of the two. Here she is, covered in shells—courtesy of Benjamin, of course: 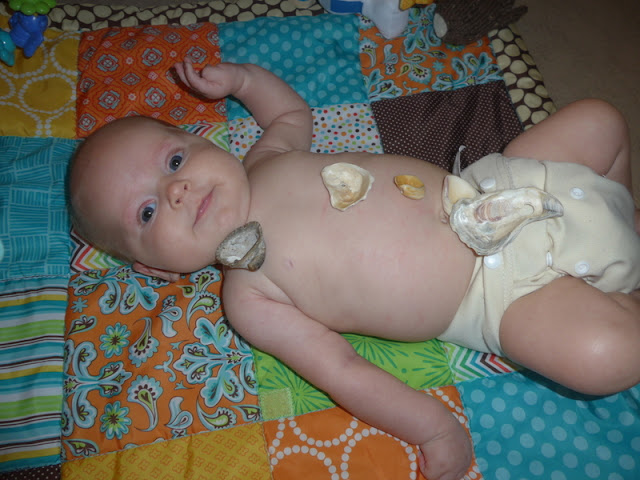 And I've completely run out of things to say but I still have more pictures to go...ummm...

I seriously spend my days walking around in a baby fog. This morning I mentioned something about getting up to feed Zoë in the night and Rachel said, "What? You feed Zoë at night? No wonder you're tired during the day!" Yeah, well, duh. And I can't just doze off whenever I want to (like Zoë can) because I have Benjamin—equal parts terror and entertainer—to take care of. 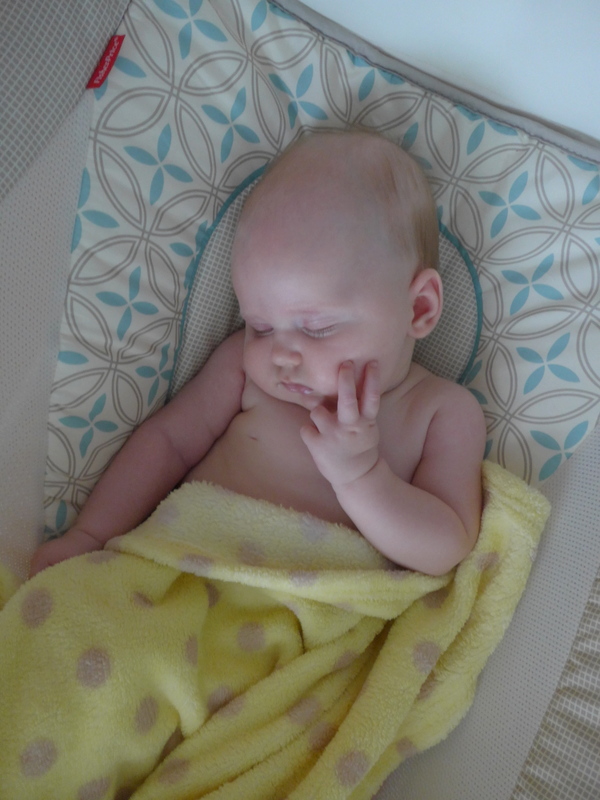 Benjamin was such a monster about nap time today (and he doesn't even take naps). He wanted to play the handbells, but I told him he couldn't because Zoë was sleeping. To her credit she sleeps through a lot of noise but handbells seemed like they'd create too much of a cacophony for even her to sleep through. Benjamin said, "I can think of a solution!" and then ran to the bedroom and started slapping Zoë's cheeks and yelling in her face, "Wake up, Baby Zo! Wake up!"

I was not impressed. 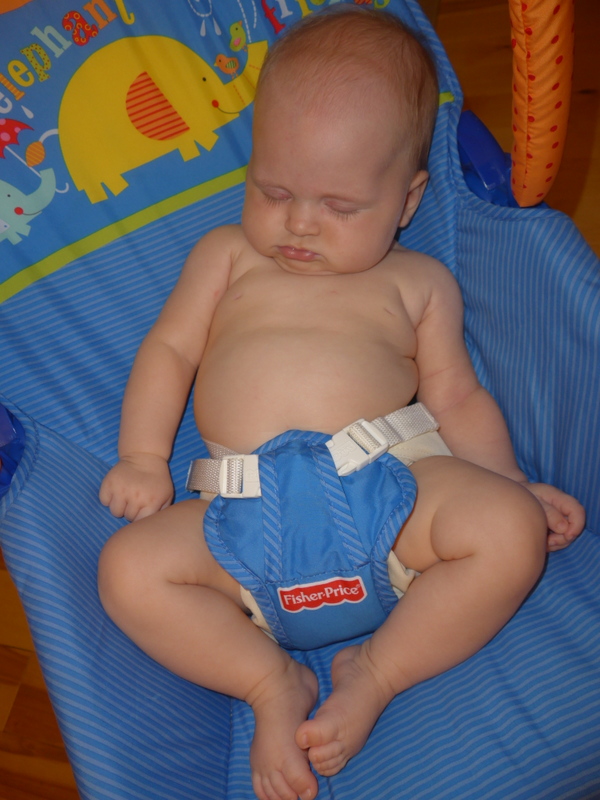 Zoë actually fell asleep on her own in her bassinet this evening. She was still awake when I finished nursing her and Benjamin was crying for me to come sing to him before he fell asleep so I just put her down and she went to sleep on her own. I hoped she'd be down for at least a few hours, but no. She's up again, waiting patiently on my lap until I give in and nurse her again. This time she chose to suck on a different combination of fingers... 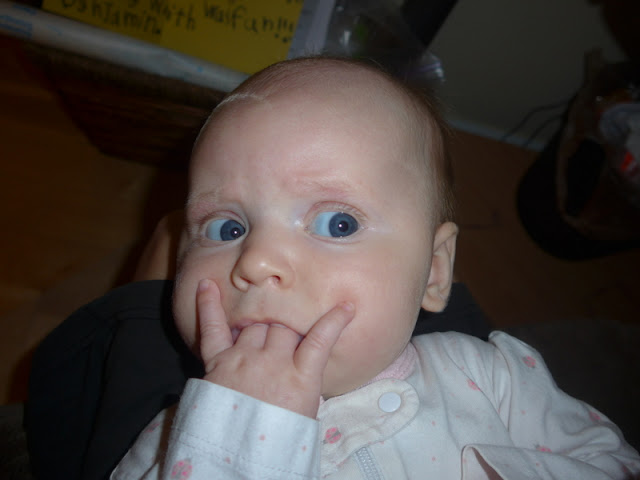