After home-church, which was really quite lovely, we held our annual Easter Egg Smackdown. Alexander has no memory of this tradition and when I asked him what it was he said, "I smack down my eggs and then I eat them!" Which, I mean, he's not wrong, I guess.

He wanted to smack down some eggs right away. Mmmmmmm...eggs... 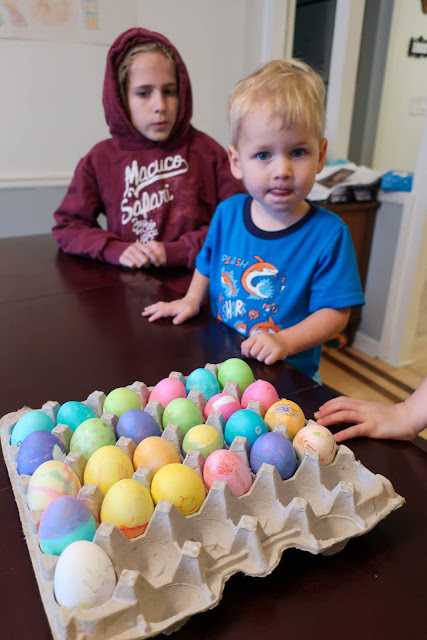 Here are our contenders: 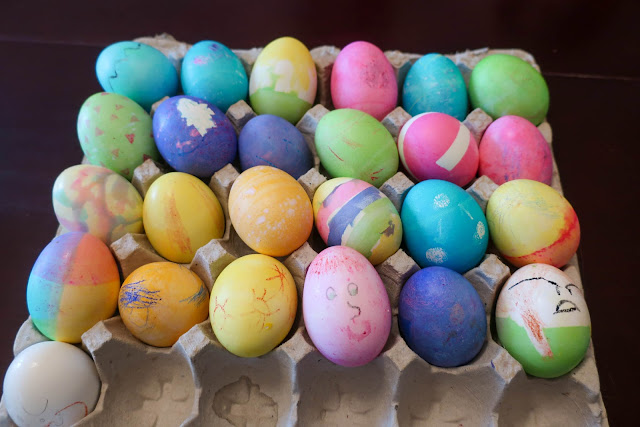 Eggs of note are my "Embarrassed Anne" egg, third from the right on the bottom row. She was so cute with her long red braids, but I made the mistake of putting her into the pink dye instead of the orange dye and even though I pulled her out pretty well immediately her skin had already flushed enough to match the colour of her hair. So...she's "Embarrassed Anne" instead of regular old "Anne of Green Gables." On the farthest right of the same row is Rachel's failed attempt at Katniss, so she renamed it "Vengeful Leprechaun," which is a good fighting name for an egg, I think.

The next row up, second from the right, Andrew has an egg he named "Collider" after some statistical graphing principle. He thinks he's so clever. Also of note is one of the purple eggs that he had tried to draw the collider graph on but it failed so he named it "Purple Failure," which is not a good fighting name for an egg.

Benjamin and I both made COVID-19 eggs. His is on the front row, third from the left. Mine is in the third row, on the very left.

Miriam and Rachel had a lot of fun dying their eggs all fancy. You can probably tell which eggs are theirs.

Benjamin made a "Firebolt" egg (Mom, this was the story I was trying to remember when I was talking with you this afternoon) by simply writing "firebolt" on it. No attempt to draw a broom or any such thing (a Firebolt is a fancy broom in the Harry Potter universe). Just the words.

Most of his eggs had about the same energy.

Zoë and Alexander mostly scribbled on their eggs and dipped them in a  thousand colours.

Alright, are you ready for ten thousand pictures of my hallway? Great! Here we go! 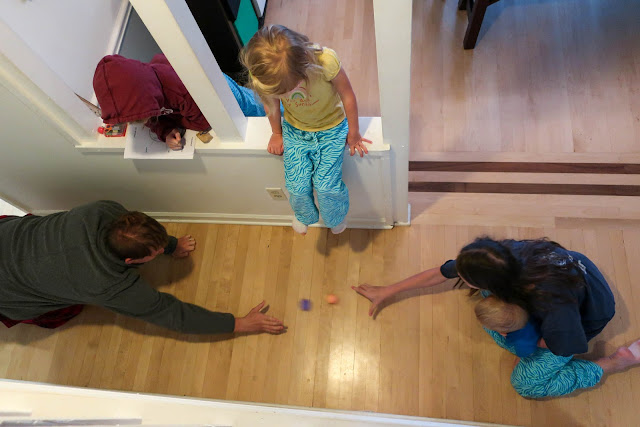 The pony wall offered excellent seating for spectators and the lighting from the kitchen was fantastic, so, we really can't complain about this year's venue. 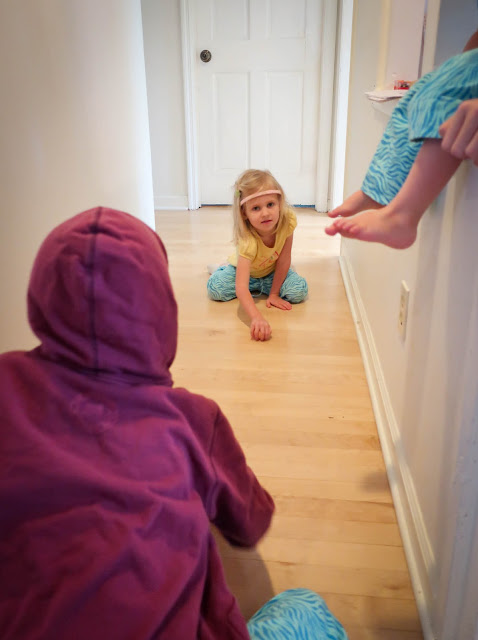 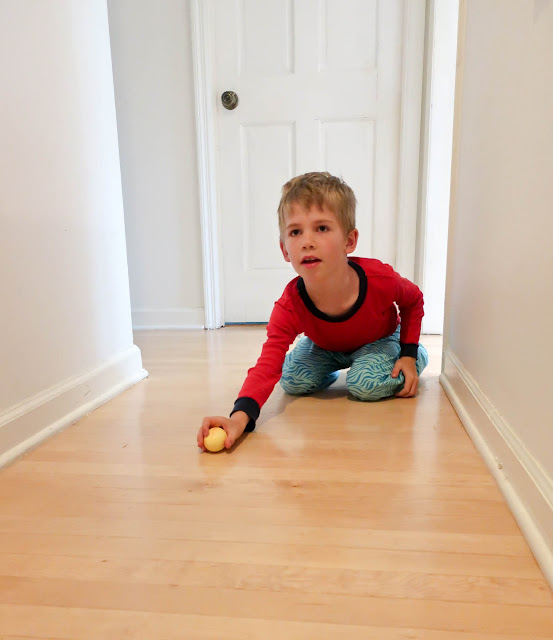 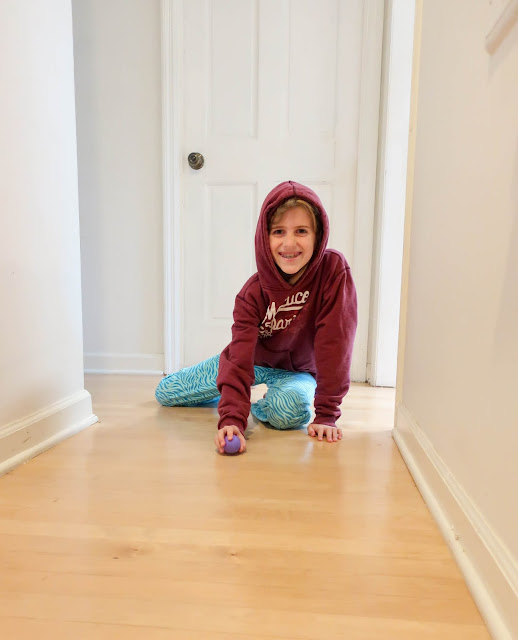 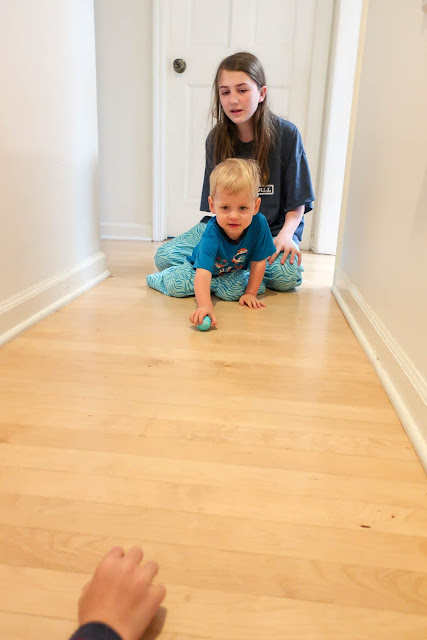 These eggs really did collide; the eggs just hit each other and then spin sideways. Something to do with physics, I reckon. That's not to say we never missed each other's eggs (we did plenty of missing), just that these particular eggs didn't miss. 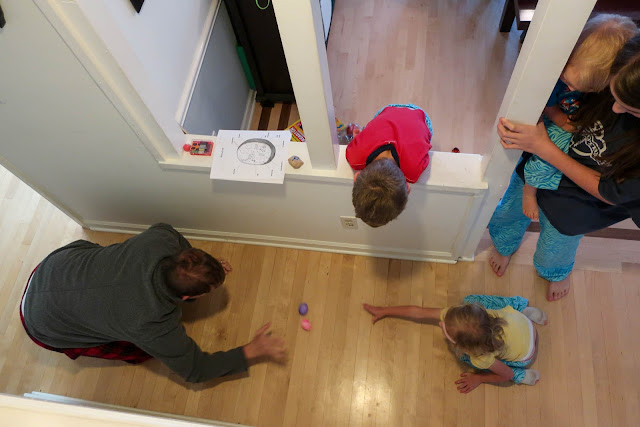 Here's Benjamin and Rachel going at it while the rest look on: 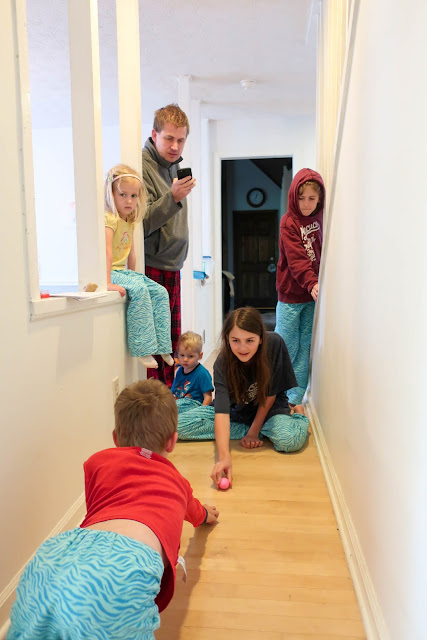 Here's Rachel checking for damage to her egg: 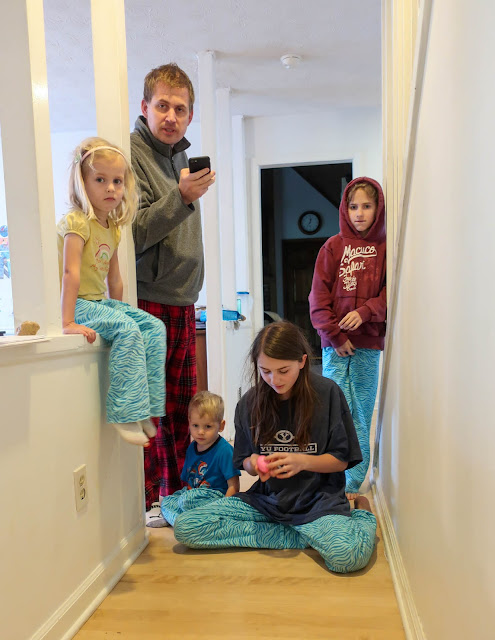 And for some reason here are Benjamin and Rachel sparring off once again, but with different eggs (and a bit of a late release by Rachel (or an early release by Benjamin; hard to say, really)): 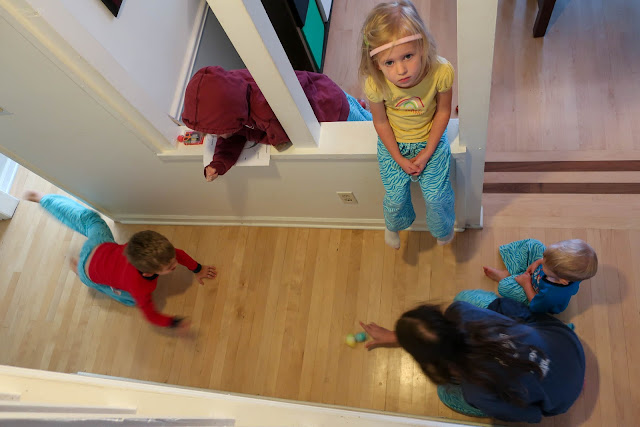 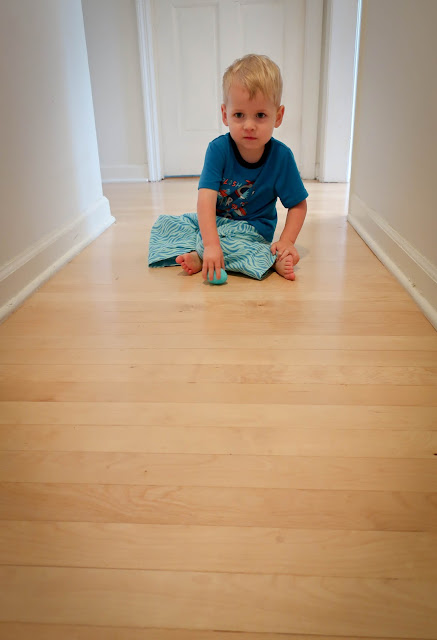 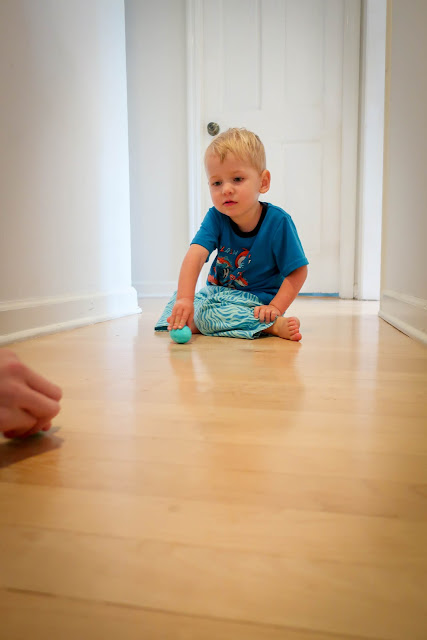 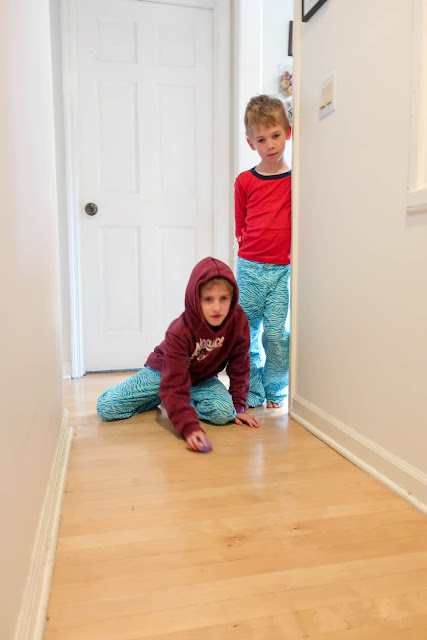 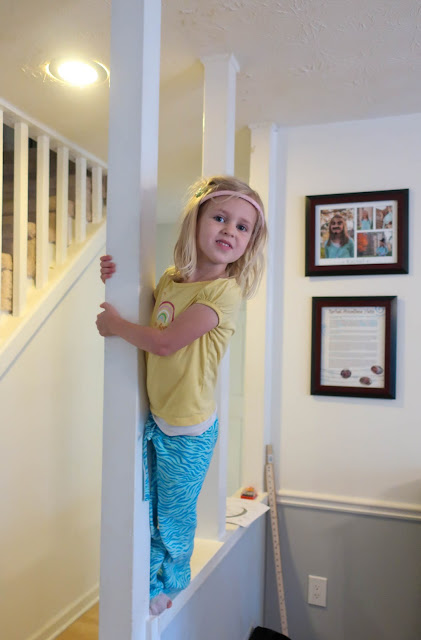 After losing several rounds Benjamin was quite desperate for a win. He got into position and gave his opponent (Andrew) a withering look: 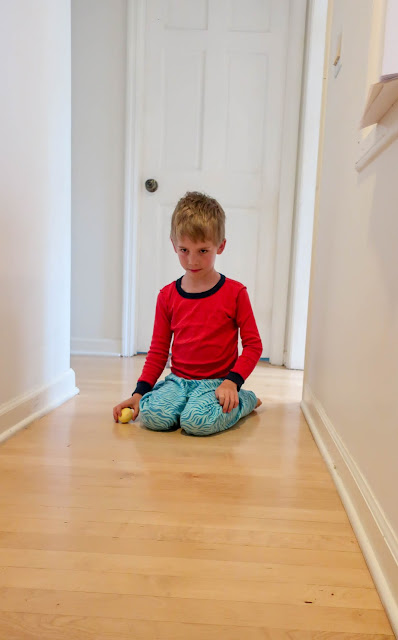 He prepared for battle, revving his egg along the floorboards (as one does): 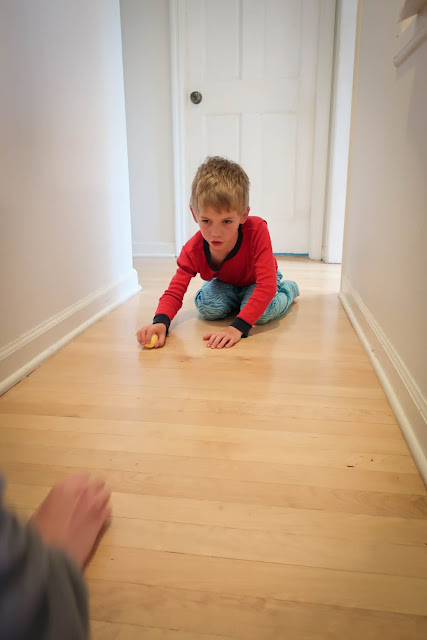 He released with gusto and his egg cracked soundly against Andrew's. But whose egg sustained the bulk of the damage? 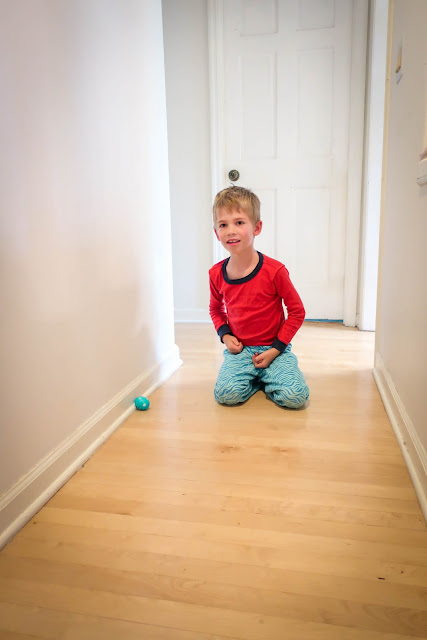 The judges all weighed in with their expert opinions and ruled... 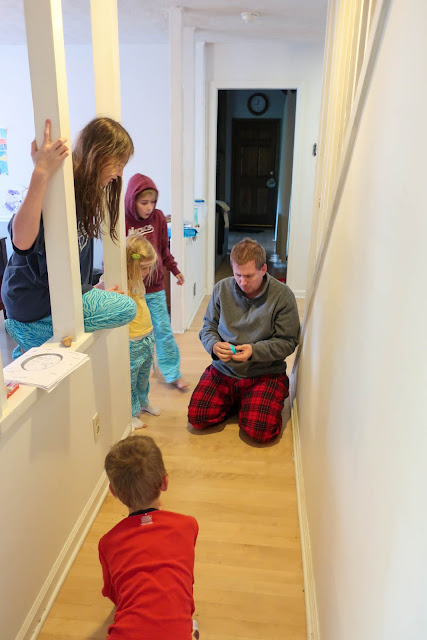 ...Benjamin the winner of that round (which made Benjamin happy). 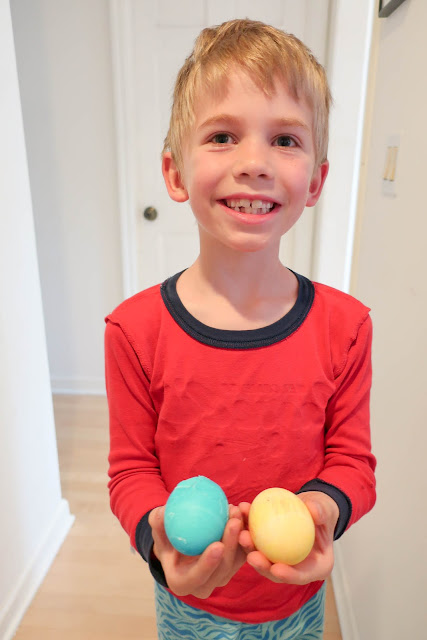 Here's sweet Zoë in a show down against...someone...I can't remember who: 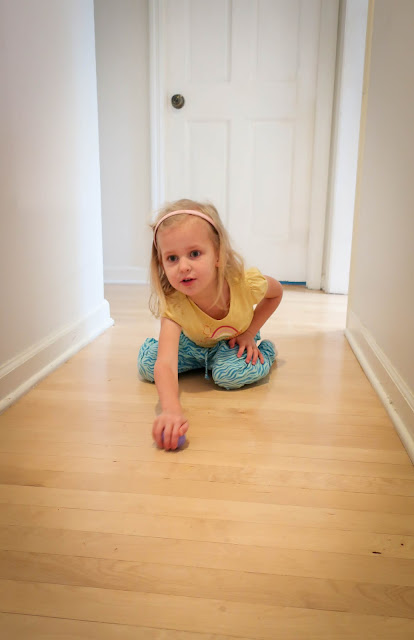 Here's me and Rachel ready for battle: 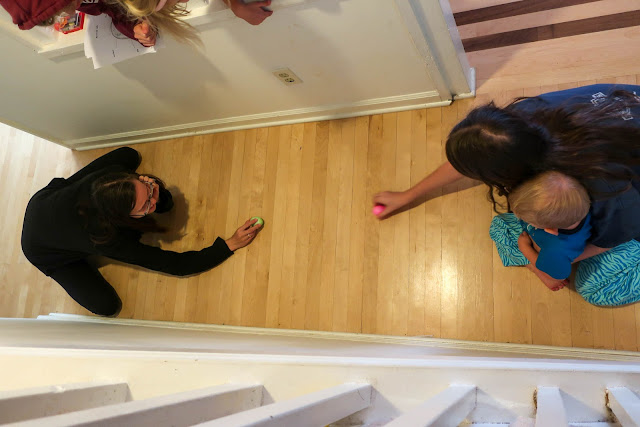 Rachel judging some eggs while Alexander looks on: 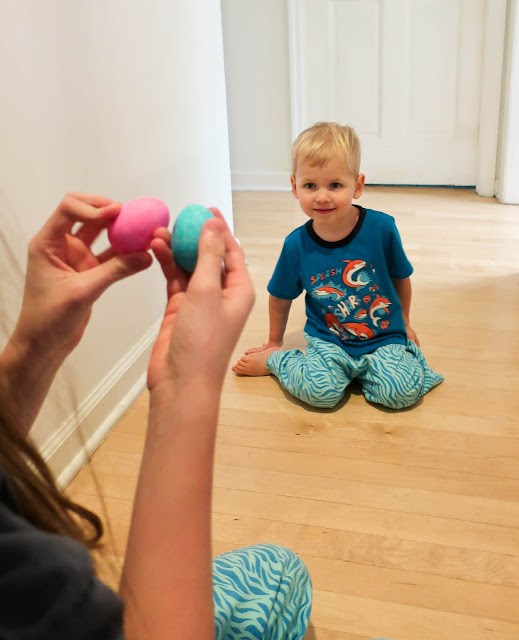 Rachel and Alexander were buddies today so they teamed up quite a bit, which makes me question the results of this year's Easter Egg Smackdown. 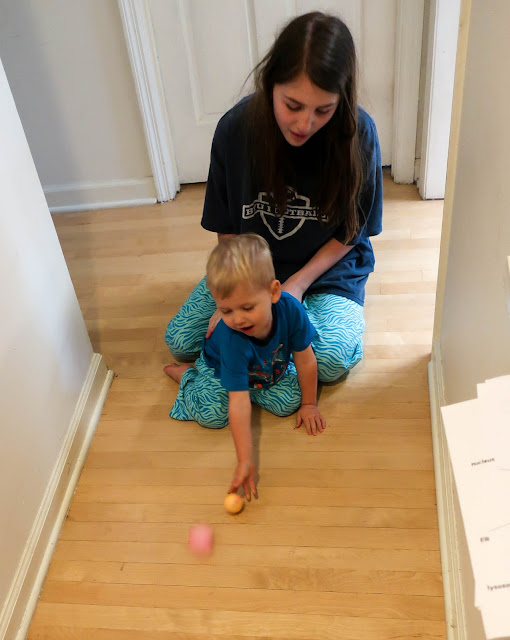 Here's Andrew getting ready to battle against some unknown foe (they stand no chance against his bedhead): 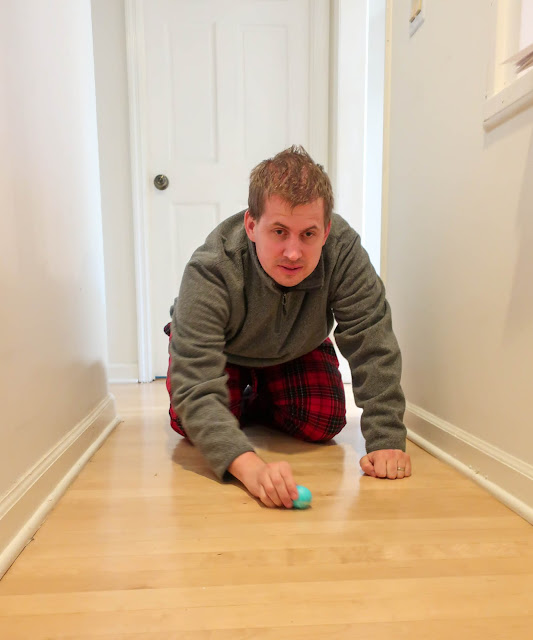 Here was our bracket this year, with Daniel Tiger (one of Alexander's eggs) coming out on top. 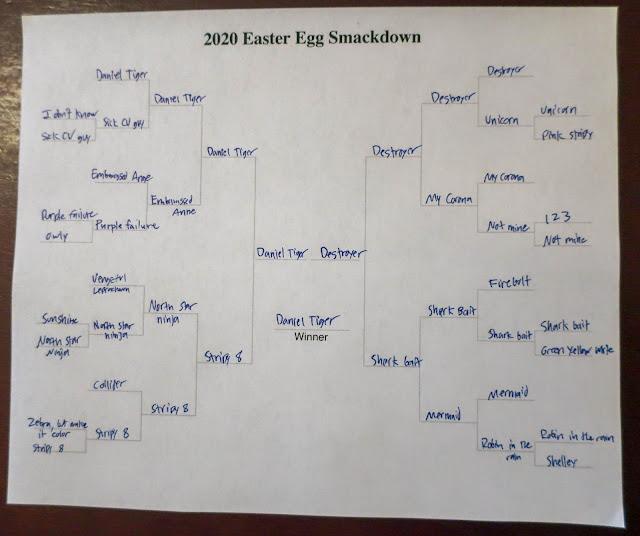 Andrew's eggs were (3): Purple failure, Collider, Pink stripy.
Mine were (2): Embarrassed Anne and My Corona.
Rachel's were (3): Vengeful Leprechaun, Zebra (but make it colour), and Shelley.
Miriam's eggs were (3): I don't know, North Star Ninja, Destroyer (who made it into the final round).
Benjamin's eggs were (5): Sick CV guy, Stripy 8, 123, Firebolt, Green Yellow White.
Zoë's eggs were (4): Sunshine, Unicorn, Mermaid and Not mine (it was really hers but she refused to claim it).
Alexander's eggs were (4): Daniel Tiger, Owly, Shark bait, Robin in the Rain

The odds were never really in my favour, were they? I think next year if the kids all steal my eggs I'm going to "dye" one of my eggs in flouride-laced mouthwash. See how their vinegar-dipped eggs like that! But I understand that eggs are fun to dye, so it's natural that the little ones would get a little carried away. Other years we might have boiled more eggs (my kids (and husband) really like eating hard boiled eggs so finishing them isn't ever really a problem; I think boiled eggs are...fine) but this is the year of the Coronavirus, so we didn't have many more eggs to dye. We haven't been to the store for a while.

We have a ton of eggs in our fridge but when Andrew bought the last flat of eggs at Costco, thinking it would be a brilliant way to stock our fridge (and it was), he didn't realize it was full of brown eggs until I opened the box when I was getting ready to make hard-boiled eggs. Luckily we had a couple dozen white eggs in the fridge as well, but now we're stuck with brown eggs (which are fine to eat but less fun to dye than white eggs are). We don't usually buy brown eggs (they're more expensive but this was the only box of eggs at the store) so it was a bit of a surprise when I opened the box!

Anyway, speaking of Coronavirus, some of our favourite battles were:

My Corona vs. Not mine, followed by My Corona vs. Destroyer (and Destroyer really did destroy the coronavirus in this battle, so that bodes well for our future). We also liked when Shark Bait and Mermaid went up against each other. 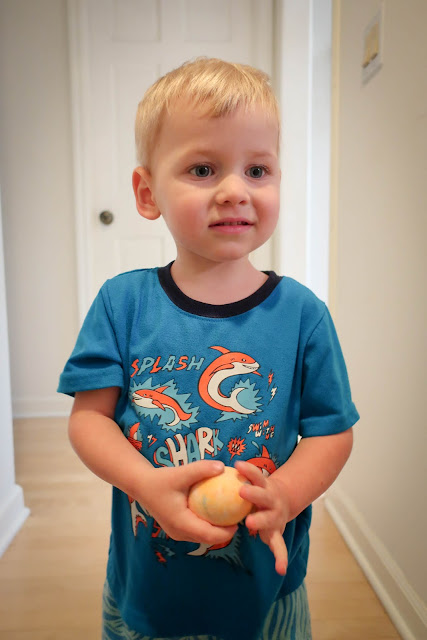 Alexander 100% did not care that he won and did not appreciate being singled out for a picture. I asked him to be a little more excited about things and he gave me this face: 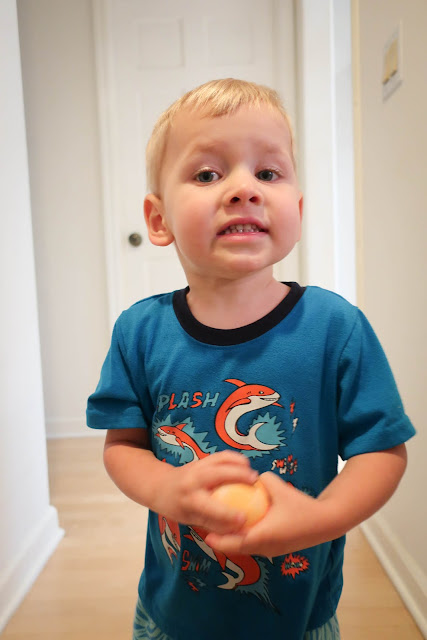 Mostly he just wanted to finally eat. his egg (thankyouverymuch). One of these years he'll look back at this day and appreciate his early win, as it will increase his ranking later on in life. (Hopefully in the future Benjamin and Zoë will sneak a win in, too, so they can get on the leaderboard; those two were a little sad about losing, Benjamin more so than Zoë who exclaimed, "I'm a winner today, too! Right, Mommy?" Sure, princess. We're all winners).

Here are all our loser less-winnerly eggs: 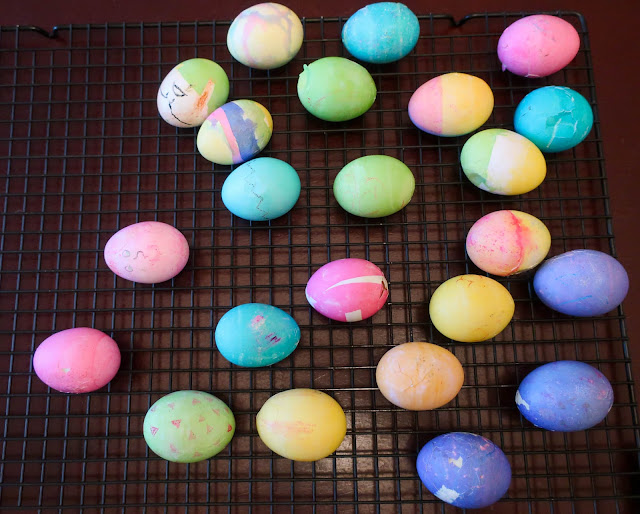