This year was, honestly, a little boring—no trips, no adventures, just lots of...staying home—but somehow I managed to cobble enough content together from our mundane life to write a poem. I finished it—and began distributing it—before Christmas but put off the task of uploading it onto the blog. I don't know why such an ordinary task seems so huge but...there you have it. The task simply felt big—making JPEGs and making sure all the links transferred over (they didn't transfer over nicely, so I had to input them manually)—and I had other things going on (like our Christmas concert and getting ready for Christmas).

So, here it is on Boxing Day, instead. You can read it below or click here to download it. 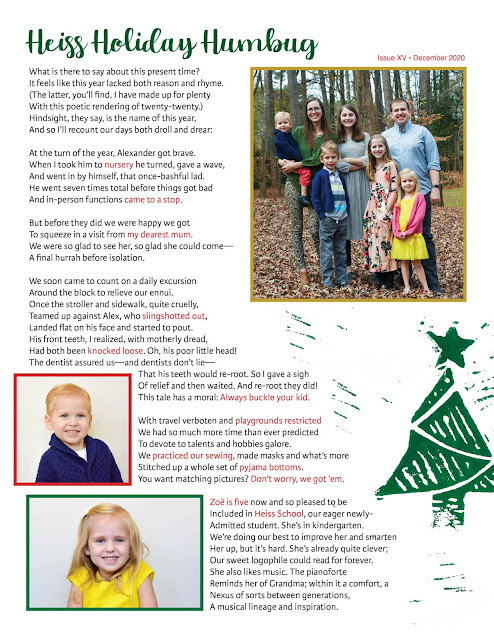 What is there to say about this present time?

It feels like this year lacked both reason and rhyme.

(The latter, you’ll find, I have made up for plenty

With this poetic rendering of twenty-twenty.)

Hindsight, they say, is the name of this year,

And so I’ll recount our days both droll and drear:

At the turn of the year, Alexander got brave.

When I took him to nursery he turned, gave a wave,

And went in by himself, that once-bashful lad.

He went seven times total before things got bad

And in-person functions came to a stop.

But before they did we were happy we got

To squeeze in a visit from my dearest mum.

We were so glad to see her, so glad she could come—

A final hurrah before isolation.

We soon came to count on a daily excursion

Around the block to relieve our ennui.

Once the stroller and sidewalk, quite cruelly,

Teamed up against Alex, who slingshotted out,

Landed flat on his face and started to pout.

His front teeth, I realized, with motherly dread,

Had both been knocked loose. Oh, his poor little head!

That his teeth would re-root. So I gave a sigh

Of relief and then waited. And re-root they did!

This tale has a moral: Always buckle your kid.

With travel verboten and playgrounds restricted

We had so much more time than ever predicted

To devote to talents and hobbies galore.

We practiced our sewing, made masks and what’s more

Stitched up a whole set of pyjama bottoms.

You want matching pictures? Don’t worry, we got ‘em.

Zoë is five now and so pleased to be

We’re doing our best to improve her and smarten

Her up, but it’s hard. She’s already quite clever;

Our sweet logophile could read for forever.

She also likes music. The pianoforte

Reminds her of Grandma; within it a comfort, a

Nexus of sorts between generations,

A musical lineage and inspiration. 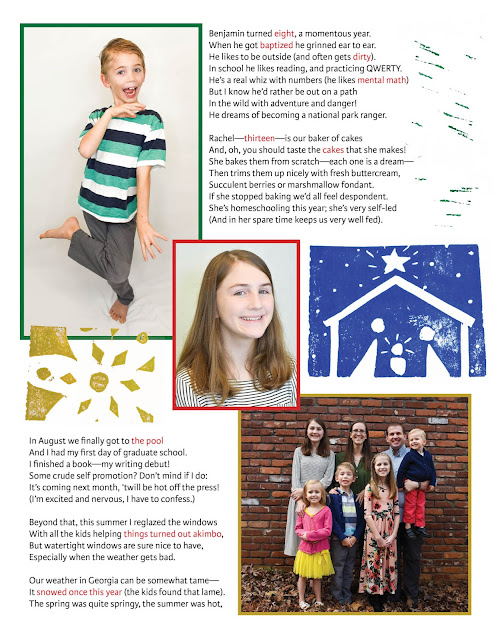 When he got baptized he grinned ear to ear.

He likes to be outside (and often gets dirty).

In school he likes reading, and practicing QWERTY.

He’s a real whiz with numbers (he likes mental math)

But I know he’d rather be out on a path

In the wild with adventure and danger!

He dreams of becoming a national park ranger.

Rachel—thirteen—is our baker of cakes

And, oh, you should taste the cakes that she makes!

She bakes them from scratch—each one is a dream—

Then trims them up nicely with fresh buttercream,

If she stopped baking we’d all feel despondent.

(And in her spare time keeps us very well fed).

In August we finally got to the pool

And I had my first day of graduate school.

I finished a book—my writing debut!

Some crude self promotion? Don’t mind if I do:

It’s coming next month, ‘twill be hot off the press!

(I’m excited and nervous, I have to confess.)

Beyond that, this summer I reglazed the windows

With all the kids helping things turned out akimbo,

But watertight windows are sure nice to have,

Especially when the weather gets bad.

Our weather in Georgia can be somewhat tame—

It snowed once this year (the kids found that lame).

The spring was quite springy, the summer was hot, 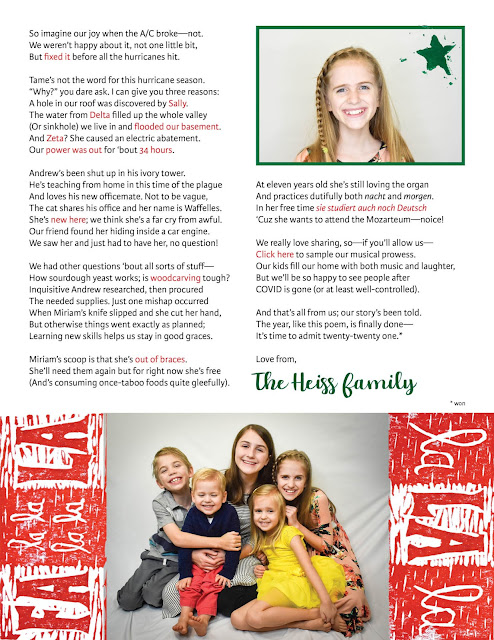 So imagine our joy when the A/C broke—not.

We weren’t happy about it, not one little bit,

But fixed it before all the hurricanes hit.

Tame’s not the word for this hurricane season.

“Why?” you dare ask. I can give you three reasons:

A hole in our roof was discovered by Sally.

The water from Delta filled up the whole valley

(Or sinkhole) we live in and flooded our basement.

And Zeta? She caused an electric abatement.

Our power was out for ‘bout 34 hours.

Andrew’s been shut up in his ivory tower.

He’s teaching from home in this time of the plague

And loves his new officemate. Not to be vague,

The cat shares his office and her name is Waffelles.

Our friend found her hiding inside a car engine.

We saw her and just had to have her, no question!

We had other questions ‘bout all sorts of stuff—

When Miriam’s knife slipped and she cut her hand,

Miriam’s scoop is that she’s out of braces.

And practices dutifully both nacht and morgen.

‘Cuz she wants to attend the Mozarteum—noice!

Our kids fill our home with both music and laughter,

But we’ll be so happy to see people after

COVID is gone (or at least well-controlled).

And that’s all from us; our story’s been told.

It’s time to admit twenty-twenty one.*

Benjamin did the woodcarving of the Christmas tree (page 1), Rachel did the nativity scene and the snowflake (page 2), and I did the fa-la-la-la-la (page 3).